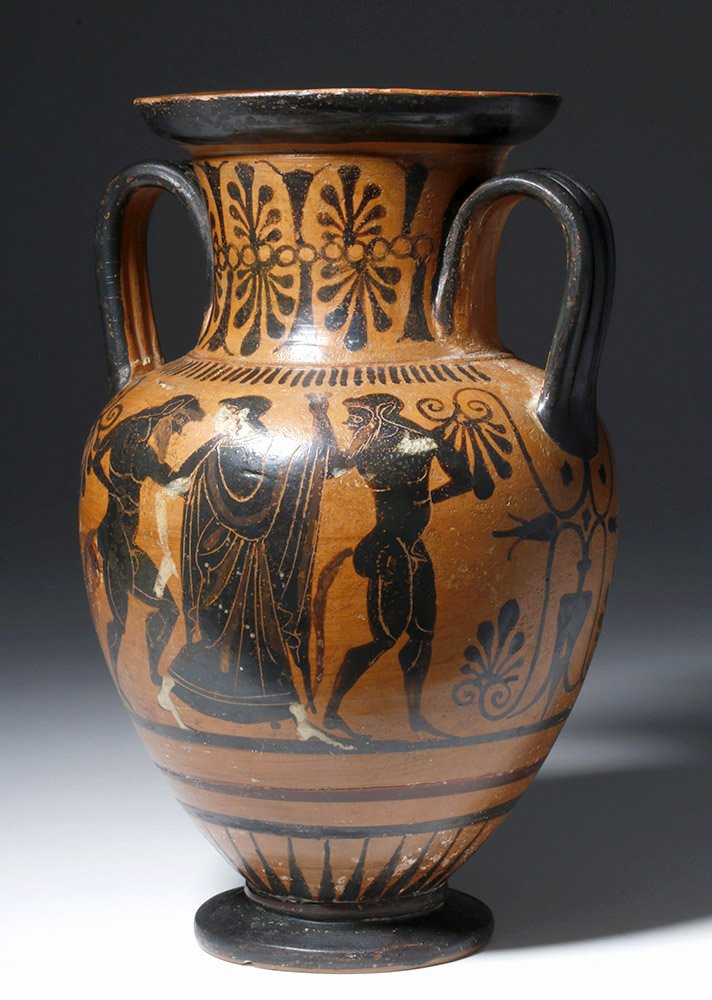 BOULDER, Colo. – While predicting the future is an exercise that fascinates all ages, looking back on various early civilizations and imagining how they lived, evolved and blended is just as intriguing. “It’s like assembling a giant, global jigsaw puzzle,” said Bob Dodge, co-owner of Artemis Gallery in Boulder, Colorado. “With every collection we view and every auction we produce, some amazing new detail comes to light that we didn’t know previously, and we love that.” One of the most reliable ways for any student of antiquities to expand their base of knowledge is to browse through Artemis Gallery’s online catalogs, including the one for their next high-profile sale, which will be held on Thursday, June 2, 2016.

The company’s Exceptional Antiquities and Ethnographic Art Auction will feature museum-worthy examples of classical antiquities, ancient and ethnographic art, as well as tribal relics, ancient jewelry, and prehistoric fossils and minerals. The timeline followed by the beautifully curated selection begins in mysterious Ancient Egypt and progresses through the Greek and Roman eras to Pre-Columbian times. As is the case with all of their sales, Artemis Gallery stands behind every item it offers. Bob Dodge and his wife, Artemis Gallery Executive Director Teresa Dodge, unconditionally guarantee each and every piece they sell to be authentic, as described, and legal to purchase according to federal guidelines. A certificate of authenticity is provided with each and every lot sold.

Exquisite pieces from the Cradle of Civilization – the Nile region – include Lot 4A, a circa first century BCE to first century CE Romano/Egyptian gold crocodile, superbly detailed and with an open mouth exposing rows of deadly teeth. The 6.875-inch animal figure is 97 pure pure gold and weighs 37.1 grams. Of the same age and quality, a 97 percent-gold monkey with a “hairy” body and simulated braided cap was part of the same pre-1960 collection that contained the crocodile. Both were analyzed by Pieter Meyers, Senior Research Scientist Emeritus, Los Angeles County Museum of Art, and determined to be absent of modern metals. Each is estimated at $25,000-$35,000 and comes with provenance that includes the Oregon estate of Victor Atiyeh (1923-2014), America’s first Arab-American governor.

A very rare, life-like mummy portrait on linen, Roman-Era Egyptian, circa second to third century CE, is similar stylistically and iconographically to the highly regarded Faiyum portraits of the Coptic period. Entered as Lot 3F, the auction portrait (below) depicts a presumably wealthy female wearing a long-sleeved dress, double-strand necklace and gold ring. A colorful bird is perched on her shoulder, and she holds a wreath of pink petals. The 13.25-inch by 20.75-inch portrait was formerly in the collection of the California Museum of Ancient Art. It is entered as Lot 3F with a $20,000-$30,000 estimate. Another important Ancient Egyptian item is Lot 3D, an openwork cartonnage aegis collar breastplate and vertical column register, $5,000-$7,000. 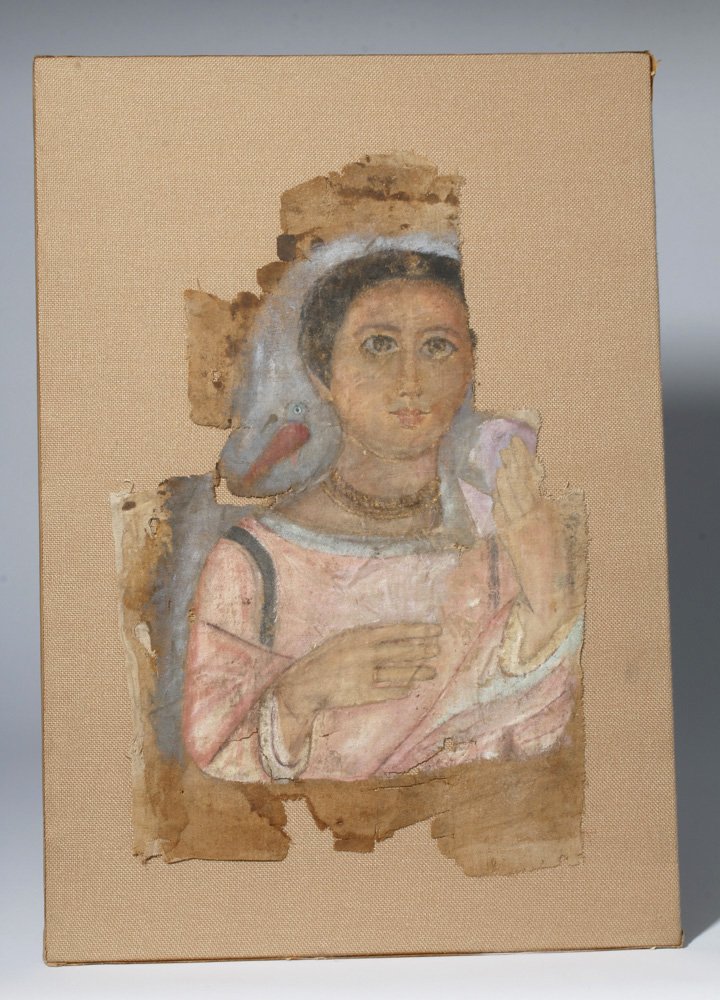 Some of the finest Ancient Greek vessels available in today’s antiquities marketplace are among the stars of the June 2 sale. Lot 4D, an impressive 11.25-inch Attic black-figure Type B belly amphora dates to circa 550-500 BCE. On one side is a helmeted warrior, possibly Achilles. On the other side is a nude male warrior. Each of the central figures is flanked by two attendants. Ex Sotheby’s London and previously exhibited at the Antiquities Museum, University of Queensland (Australia), it is likely to reach $30,000-$60,000 at auction. There are similar auction expectations for Lot 4E, a circa 500 BCE Attic neck amphora with art depicting the mythological story of the abduction of Hippodameia. It was formerly part of the Jurgen Haering private collection, Germany, 1980s.

Another remarkable rarity is Lot 15H, a circa fifth century BCE Etruscan cast-bronze mirror handle depicting a female caryatid figure with a feline on her left shoulder. The cat stands on its hind legs, its paws grasping the scrolled Ionic capital atop the woman’s head. “Hand mirrors were important to Etruscan society, and their decorations have provided historians with valuable information about the culture’s mythology and religion,” said Teresa Dodge. A connoisseur’s piece, the figural mirror handle is estimated at $30,000-$60,000.

Lot 93A, an imposing 19th-century European black and white three-quarter suit of armor (below), was well restored and mounted in a manner that shows off its design attributes. The warrior who wore this suit would have been amply protected on the battlefield, even down to the gauntlets with leather-backed articulating fingers. Purchased on the London art market in the 1960s by a prominent collector of arms and armor, it passed by descent to its current owner and comes to auction with a $25,000-$35,000 estimate. 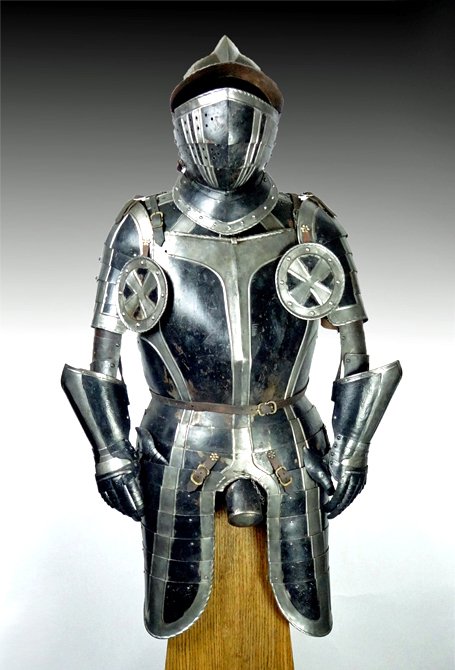 A fine selection of Roman antiquities ranges from pottery to statuary to metalwork. Lot 25D, a circa third to seventh century CE iron bipartite helmet, shows a strong Roman influence as well as design elements that emerged in other parts of Europe after the fall of the Roman Empire. With provenance from the A. Green (British) private collection, it is cataloged with a $30,000-$50,000 estimate. 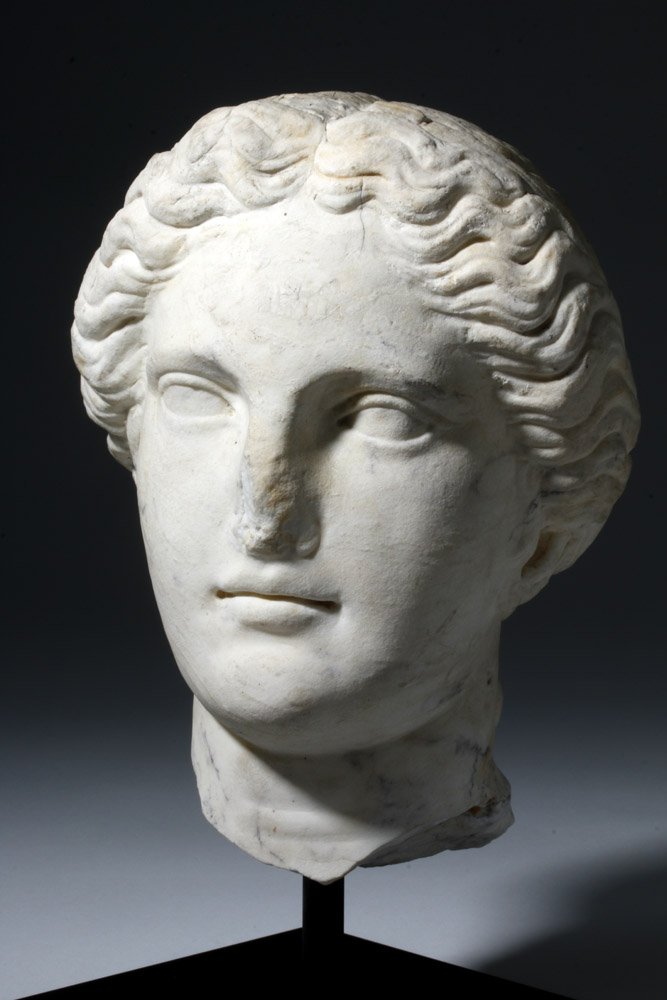 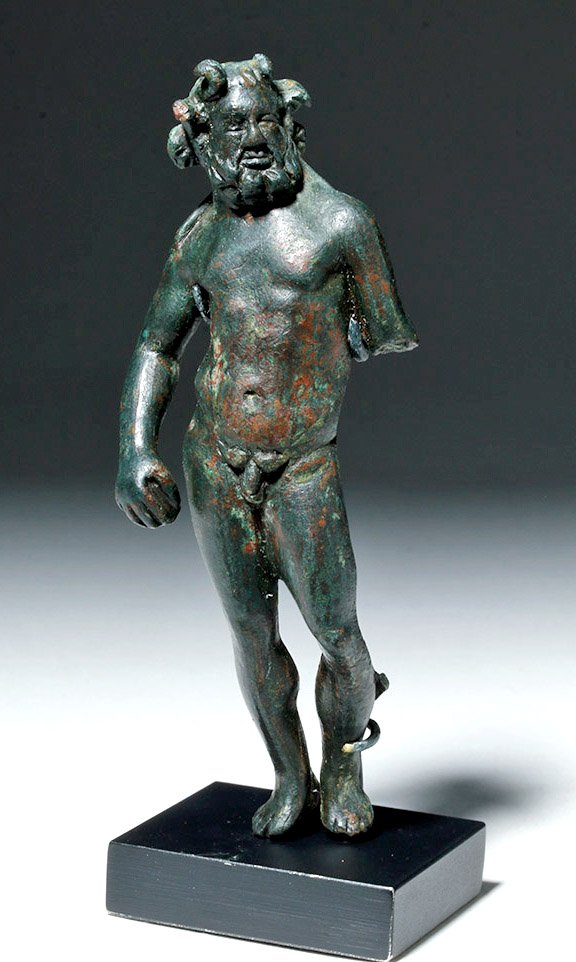 In every Artemis Gallery auction, collectors of ancient jewelry can count on seeing a fresh selection of magnificent designs. This time the grouping is led by Lot 26, an Iron Age (circa fourth to first century BCE) 20K gold Celtic torc (hoop) bracelet, $4,000-$6,000. Additionally, there are several pieces of coveted Viking objects, including Lot 25S, a solid twisted silver neck ornament, $2,500-$3,500.

Of the Near Eastern treasures to be auctioned, it would be hard to overlook Lot 33, a Gandharan gray schist bas-relief panel depicting Atlas and Menoetius. Originating in an ancient region of northwest Pakistan and created around the second to third century CE, the sculpture displays a high level of carving skill and appreciation of the human anatomy. Estimate: $10,000-$15,000.

Asian entries are long on provenance and quality. Lot 39, a Chinese bronze bian hu (below), also sometimes known as a “pilgrim vessel,” dates to the Song Dynasty or earlier, circa 450 BCE to 1279 CE. A striking piece with flowing low-relief designs within rectangles, it is very similar to examples at the Field Museum in Chicago, the Smithsonian and the Ashmolean Museum at the University of Oxford. Previously sold at Parke-Bernet Galleries and published in Art of Antiquity by Colin Mackenzie, it is estimated at $8,000-$12,000. 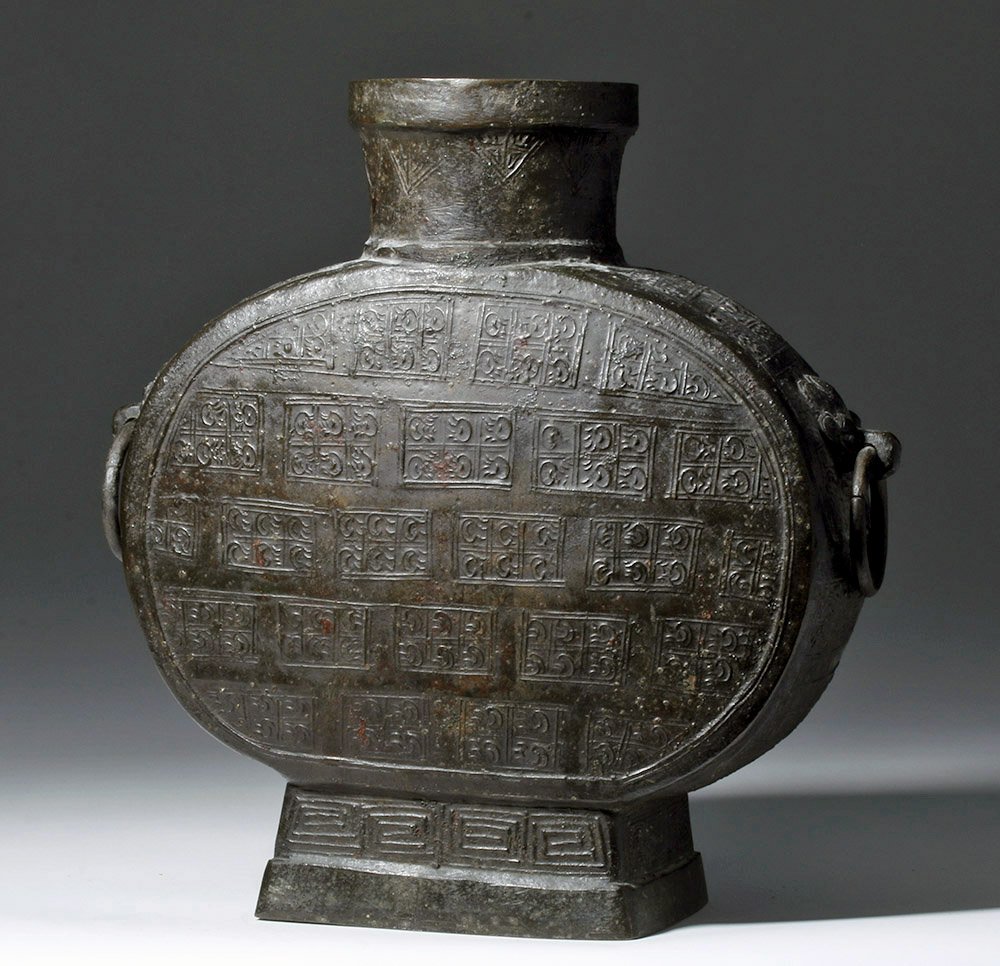 Two special groupings of Pre-Columbian art are featured in the sale, both to benefit nonprofits. Over a period of time, the California Museum of Ancient Art will be deaccessioning more than 100 cultural works at auction through Artemis Gallery, with proceeds to fund new acquisitions. The first nine pieces are included in the June 2 sale, among them: Lot 60D, a Moche figural pottery jar in human form, $1,200-$1,500; and an amusing Inca Chimu blackware pottery jar molded in the form of a couple in the act of coitus, $900-$1,200.

A second charitable selection will be auctioned to benefit six animal welfare organizations in Taos, New Mexico. An anthropomorphic figure and several desirable stone masks will be up for bid, including Lot 48E, a large and rare jadeite maskette (below) from the Olmec (Southern Mexico to Guatemala) culture, $7,000-$9,000. 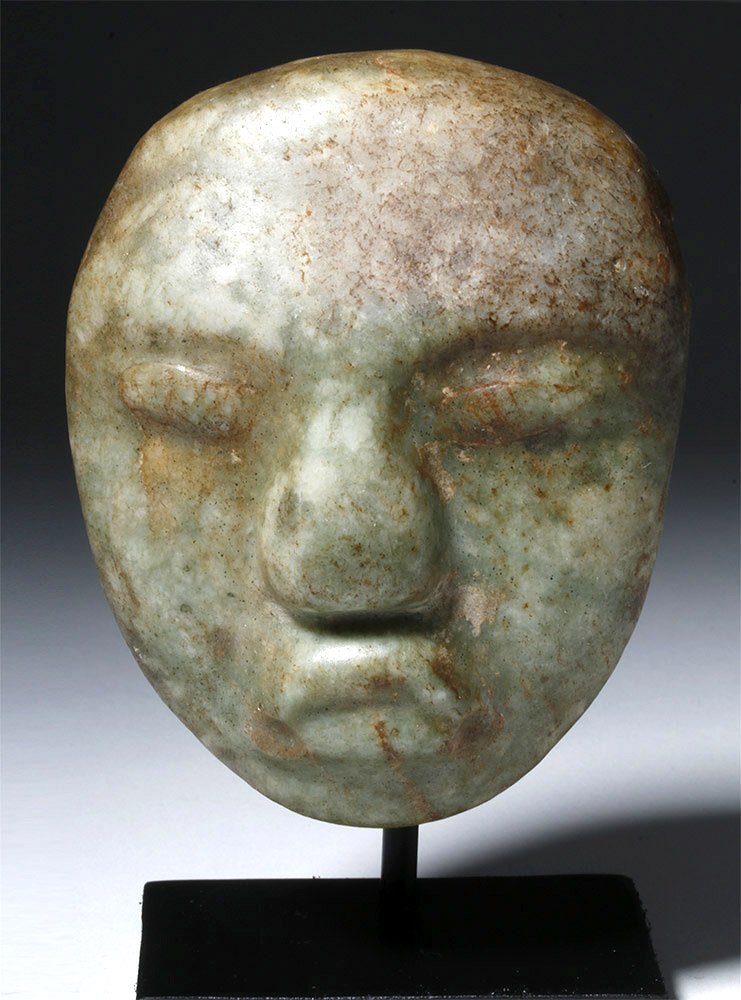 All items in the auction are unconditionally guaranteed to be authentic and to have been legally acquired. As an additional service to its customers, Artemis Gallery carefully packs all goods in-house to ensure a safe delivery.

The sale will begin at 11 a.m. Eastern Time.

For additional information call Teresa Dodge at 720-890-7700 or email teresa@artemisgallery.com.

Antique benches have left the station