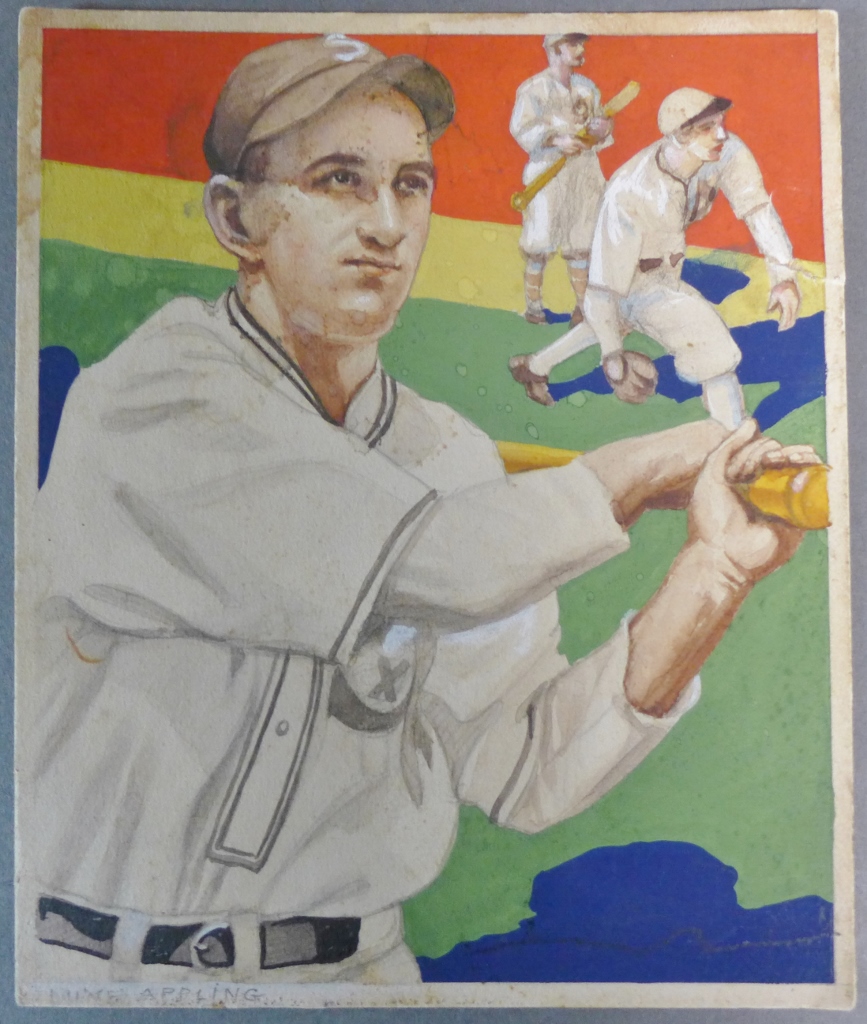 CLOSTER, N.J. – In the field of sports journalism, few can rival Bill Madden’s record when it comes to chalking up career highlights. A UPI sportswriter for nine years, Madden joined the New York Daily News in 1978, first covering the New York Yankees beat, then launching his own religiously followed column. He is a distinguished member of the Baseball Writers Association of America, and for the last 12 years has served on the Historical Overview Committee of the National Baseball Hall of Fame that compiles the ballots for the Veterans Committee elections. Madden also authored several books about the Yankees, but his crowning achievement was his own election to the National Baseball Hall of Fame, as winner of the 2010 J.G. Taylor Spink Award.

Over the course of his illustrious and passion-fueled career, Madden devoted his free time to amassing what is, by anyone’s standards, an extraordinary collection of autographed baseball material and other ephemera. That collection will headline a June 13 auction conducted by Sterling Associates of Closter, New Jersey.

“In his own ‘ballpark’ – sports journalism – Bill Madden is as legendary a figure as the iconic players he wrote about for 37 years in his newspaper column,” said Sterling Associates owner, Stephen D’Atri. “We anticipated seeing some very rare items in his collection, and we were not disappointed.”

The Madden collection has been apportioned into over 150 cataloged auction lots, many accompanied by JSA authentication certificates. As an extra bonus, each and every item from the Madden collection will convey with a personally handwritten letter in which Bill Madden details how the piece was acquired.

“The first of two selling sessions will be devoted exclusively to Bill’s property, with the exception of only a couple of highly important, additional items,” said D’Atri. A second session, containing antiques and art, will follow the luncheon intermission.

The collection contains a wealth of signed photos, baseballs, bats, press pins and signed artworks. There are three complete collections of baseball cards, from the years 1973, 1976 and 1979. In addition there are several of the much-coveted 1911 T-3 Turkey Red cabinet cards, along with books and other memorabilia. 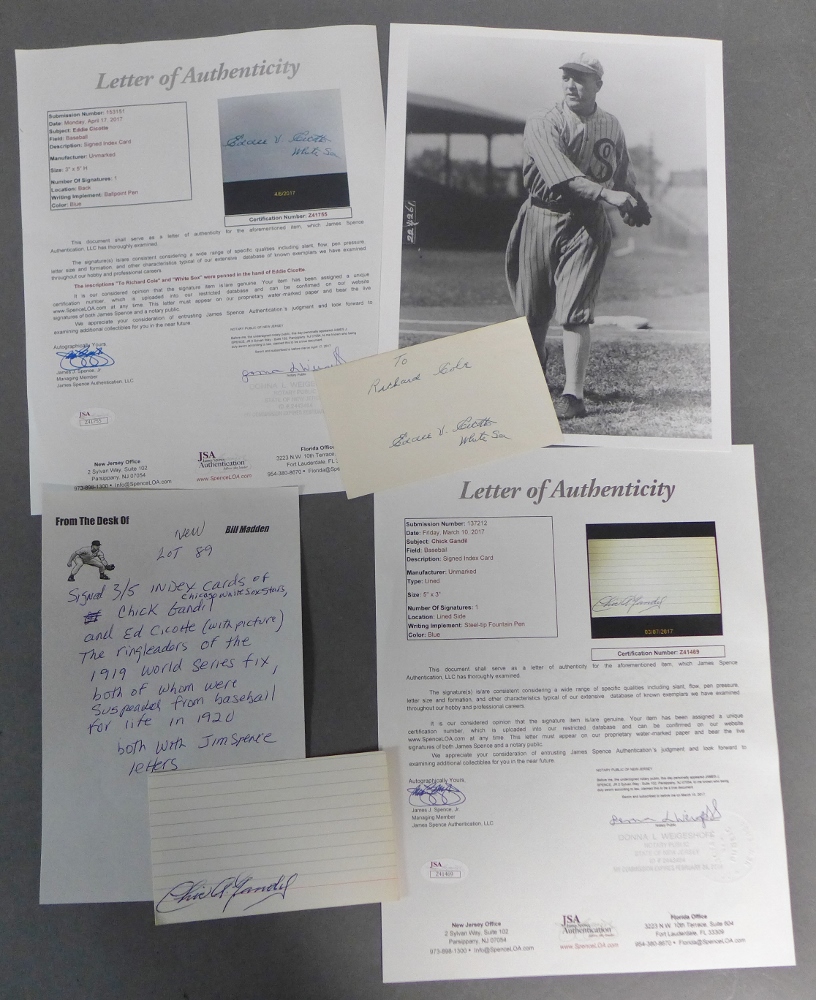 Mini archive of ephemera pertaining to Chick Gandil and Eddie Cicotte, ringleaders of the notorious 1919 World Series Fix, who were suspended from baseball for life. Grouping includes both men’s signatures plus photo of Cicotte in uniform. JSA LOA. Bill Madden Collection. Estimate: $50-$5,000

Lot 11 (above) is Madden’s mini archive of ephemera pertaining to Chick Gandil and Eddie Cicotte, ringleaders of the notorious 1919 World Series Fix. In 1920, Gandil and Cicotte were suspended from baseball for life. The auction grouping, with JSA LOA, includes both men’s signatures, as well as a photo of Cicotte in uniform. 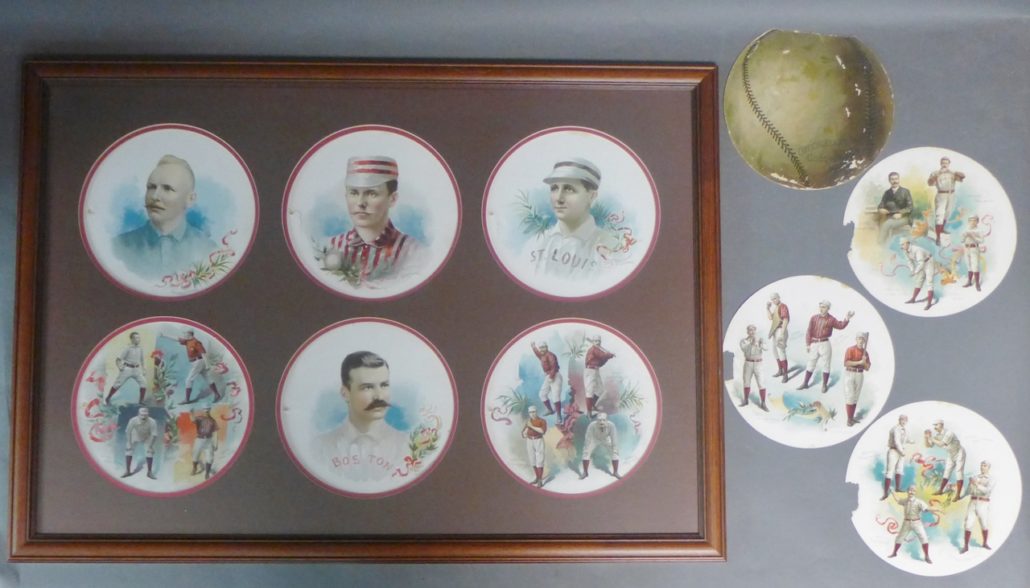 Another top highlight is Lot 91, shown above, a complete “Goodwin Round Album.” This 19th-century rarity issued by New York City tobacco manufacturer Goodwin & Co., consists of 10 pieces in total, with six of the round, color illustrations handsomely matted and framed under glass. This important tobacco-card series includes four single, full-color portraits of players Anson, Kelly, Ward and Comiskey; and full-length poses of Hall of Famers Mickey Welch, Tim Keefe, Roger Connor, John Ward and Jim O’Rourke. The inclusion of the original album cover makes this elusive set an even greater prize. 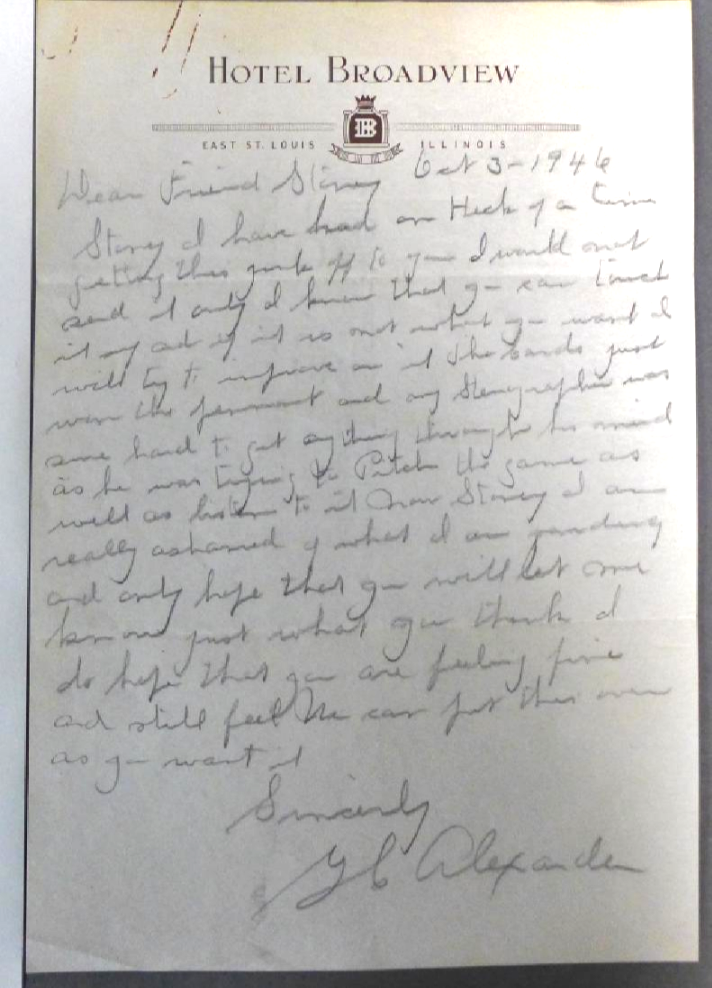 Two important auction items are associated with Grover Cleveland Alexander (1887-1950), the Hall of Fame pitcher for the Phillies, Cubs, and Cardinals. Lot 22 (shown above) is a circa-1946 letter on Hotel Broadway stationery, handwritten and hand-signed by Alexander and accompanied by a JSA LOA. Lot 49, a circa-1912 “S-1 Silk” of Alexander depicting him in a pitcher’s wind-up pose and is imprinted with “89” at the upper left-hand corner and “ALEXANDER Phil. Nat’l” below the portrait.

A premier entry, Lot 92 (shown at top of page) is the artist’s original slab for the Lucius Benjamin “Luke” Appling baseball card produced as part of the 1935 Diamond Stars baseball card set. A vibrant and colorful watercolor, this multiple-pose depiction of the White Sox shortstop and Hall of Famer is believed to be a one-of-a-kind artwork. 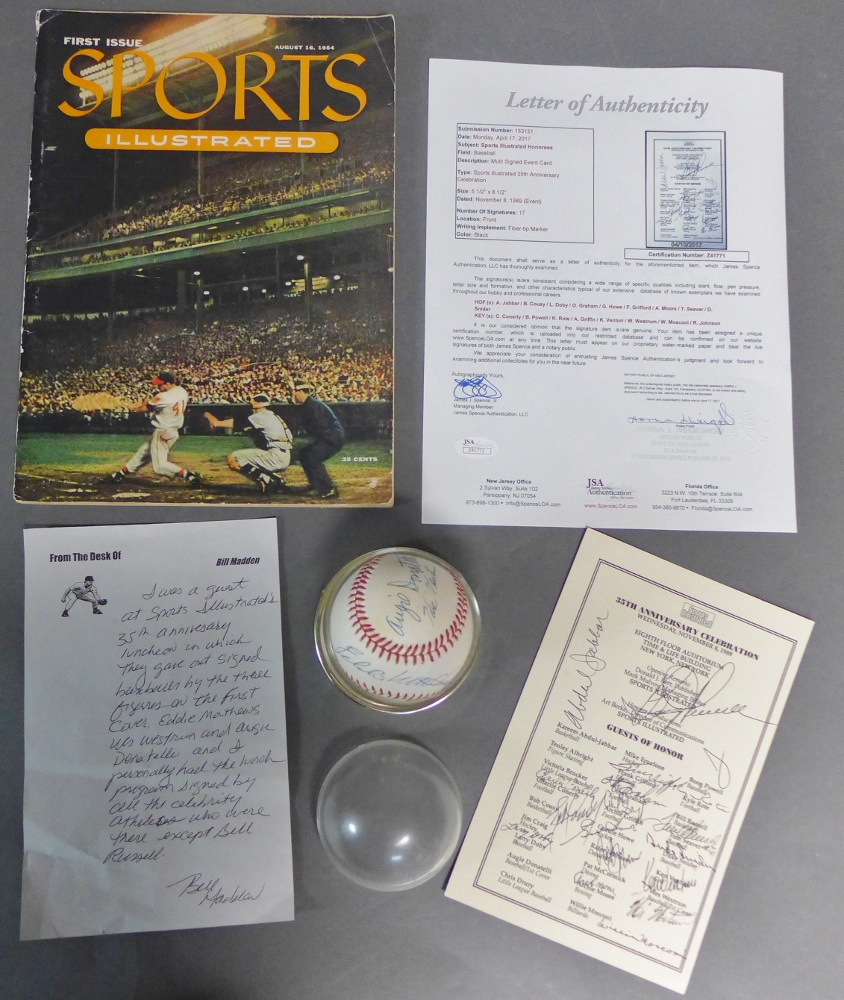 Published in 1954, an example of issue No. 1 of Sports Illustrated, the bible of sports periodicals, is offered together with a baseball autographed by Milwaukee Braves slugger Eddie Mathews, umpire Augie Donatelli and NY Giants catcher Wes Westrum, all of whom are pictured on the magazine’s cover. An added sweetener is a Sports Illustrated 35th Anniversary Celebration program signed by 17 sports legends, among them Kareem Abdul-Jabbar, Bob Cousy, Gordie Howe, Tom Seaver, Duke Snider, Ken Venturi, and Frank Gifford. The group lot is accompanied by a JSA LOA.

Two rare and superb photographs, Lots 140 and 141, will appear in the auction spotlight alongside the Bill Madden collection. A clearly autographed circa-1927 photo depicts the great Babe Ruth posed with members of the Big Bayou Base Ball Club, while a circa-1928 autographed black-and-white photo shows the immortal “Iron Horse,” Lou Gehrig, posed alongside a youth. Each of the photos measures 5 by 7 5/8 inches and is accompanied by a JSA LOA. 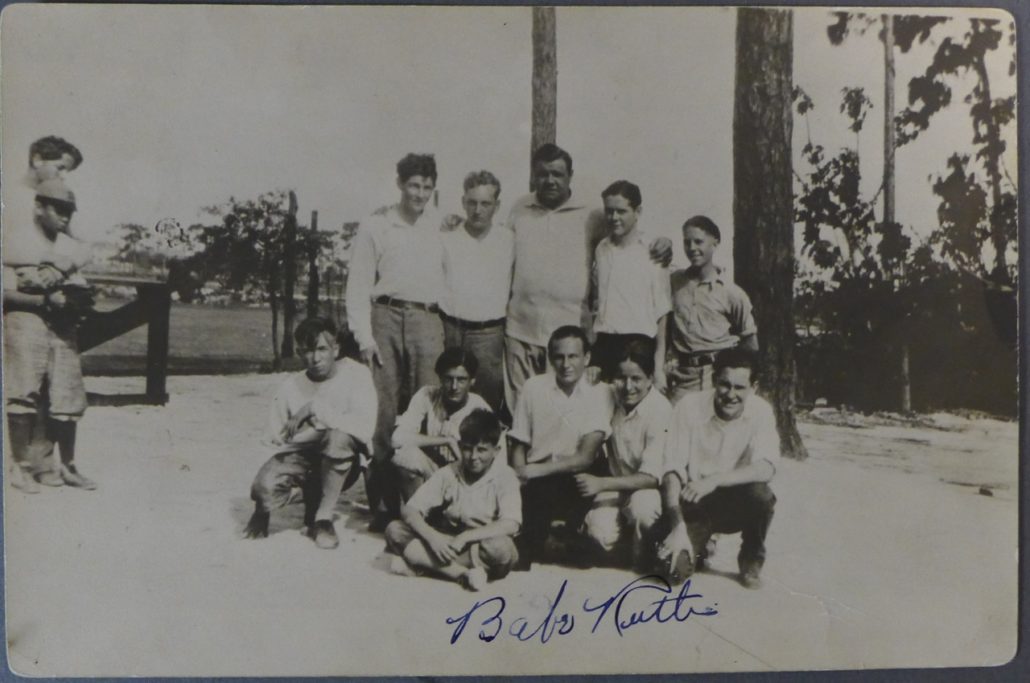 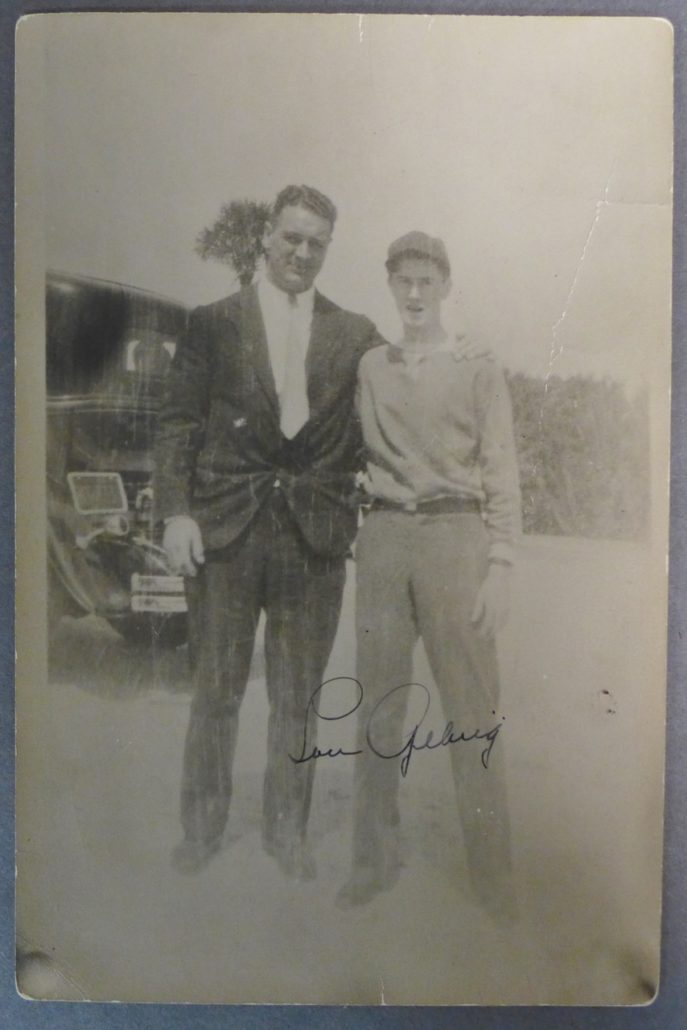 “We believe these two photos to be unique. To our knowledge, there are no copies anywhere,” said D’Atri. “They came to us from a gentleman whose father was a batboy in Florida. They’re very interesting photos that collectors are going to want to own.”

Sterling Associates, Inc., is a full-service brick-and-mortar auction house. The company’s “hybrid auctions” are conducted online, just like a live auction, but without a live audience in attendance. Bidders may participate absentee or live via the Internet through LiveAuctioneers.com. All items may be previewed prior to auction day at the gallery, located at 70 Herbert Ave., Closter, NJ 07624.