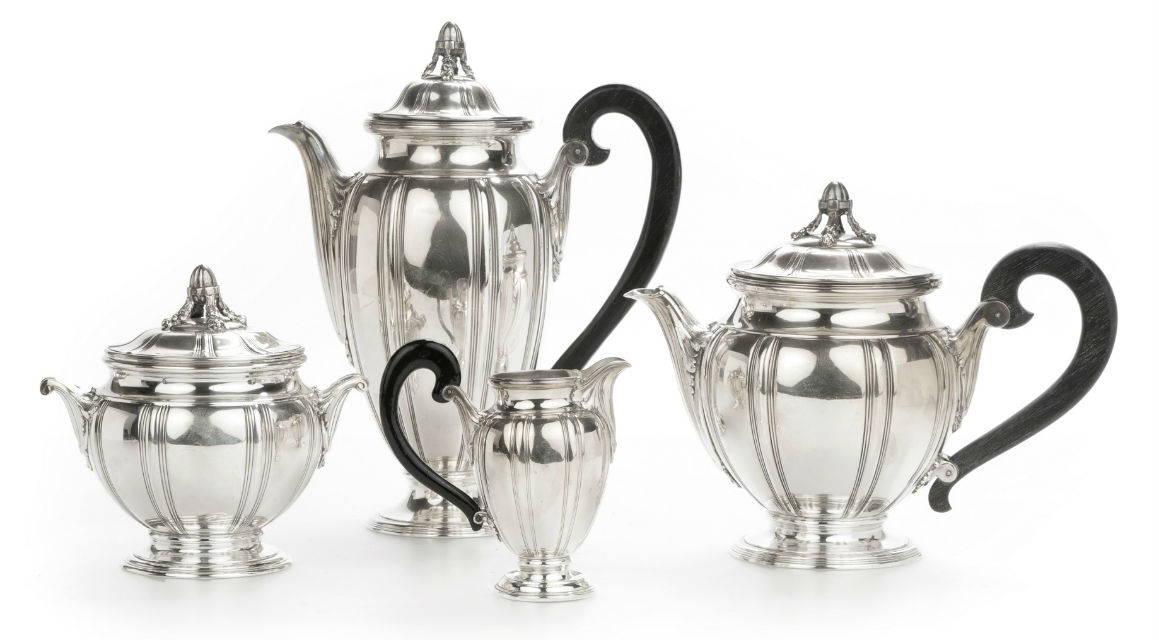 An early 20th-century French first standard silver coffee and tea service will make its way to the block with a $1,500 to $2,500 estimate. John Moran Auctioneers image

As compared to the other multi-session spring auction events held so far this year, Moran’s June 20 auction event is a streamlined affair, featuring just over 250 lots. The catalog focuses on Continental aesthetics from the 18th century to the present day, with an emphasis on classic design elements.

One of the evening’s expected top lots is a wonderfully detailed gilt and polychromed bronze sculpture of a standing woman with veil by Jean-Léon Gérôme (1824-1904 French). A life-long proponent of the Academic style and a known detractor of the Impressionist movement to which he ascribed a “great moral slackening,” Gérôme’s La Femme Au Voile (below) is representative of the artist’s highly detailed, historically minded approach. The gorgeously rendered bronze measures just under 3 feet tall, and is expected to bring $50,000 to $70,000 at the auction block. 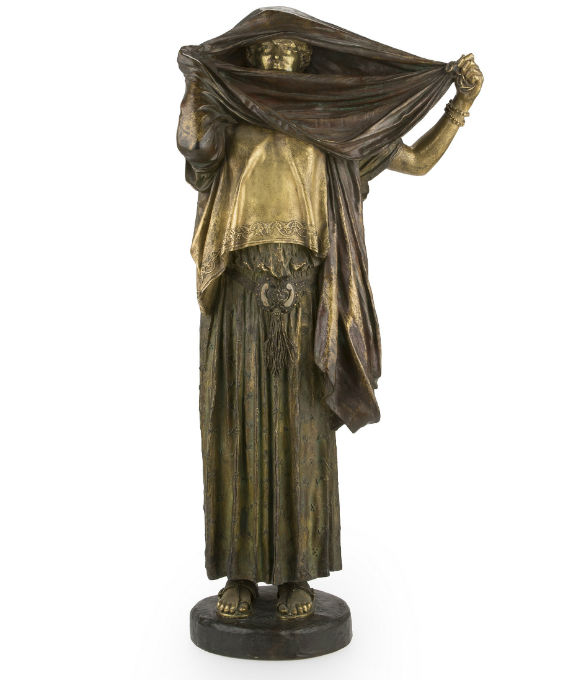 Also sure to make an impression, a large-scale parcel-gilt and patinated bronze sculpture after French artist Arthur Le Duc (1848-1918) titled “Nessus and Dieaneira” depicting a nude female figure on the back of a galloping centaur will head to the block with a $3,000 to $5,000 estimate.

European paintings include Planche a Dessin (Drawing Board), a masterful trompe l’oeil by modern French painter Nadine Le Prince (below). 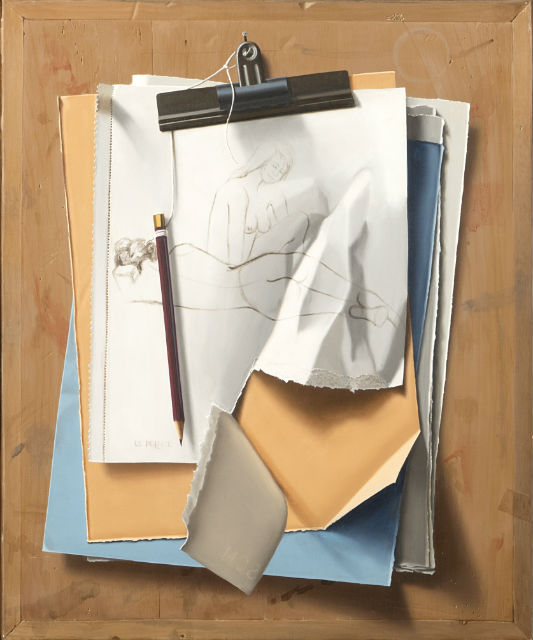 A Sevres-style hand-painted porcelain lidded urn with an unusual powder pink ground is painted with a delightful scene of the goddess Diana attended by winged putti, and is conservatively estimated to bring $2,000 to $3,000. A pair of handsomely modeled Berlin/KPM porcelain covered jars featuring reserved scenes of courting couples and gilt eagle-form finials is expected to bring $1,200 to $1,800. A selection of hand-painted German porcelain plaques by KPM and other makers consigned from a private Los Angeles collection will be offered with conservative estimates. 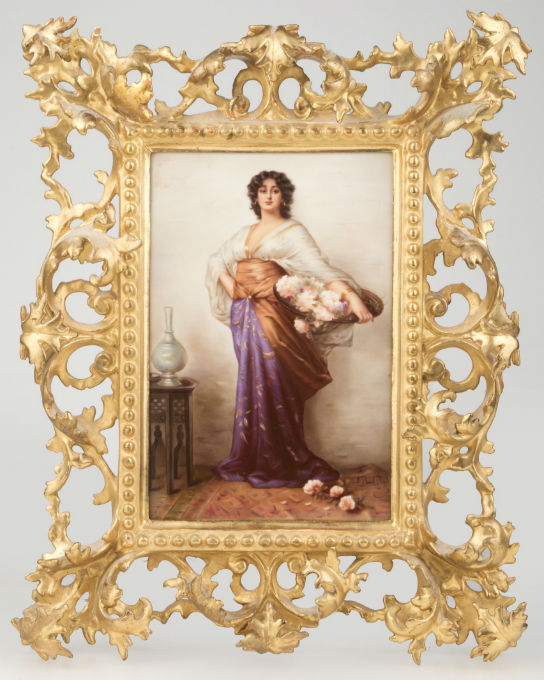 This fine Berlin/KPM porcelain plaque is offered with a conservative $800 to $1,200 estimate. John Moran Auctioneers image

Those looking to entertain with flair should look no further than an impressive French .950 silver coffee and tea service consigned from the same aforementioned Southern California collection (top). The set, likely dating to the early 20th century, consists of four gourd-form pieces and is modeled in a classic, clean aesthetic (est. $1,500 to $2,500). More contemporary silver lots by makers such as Buccellati are also to be found throughout Moran’s June catalog. 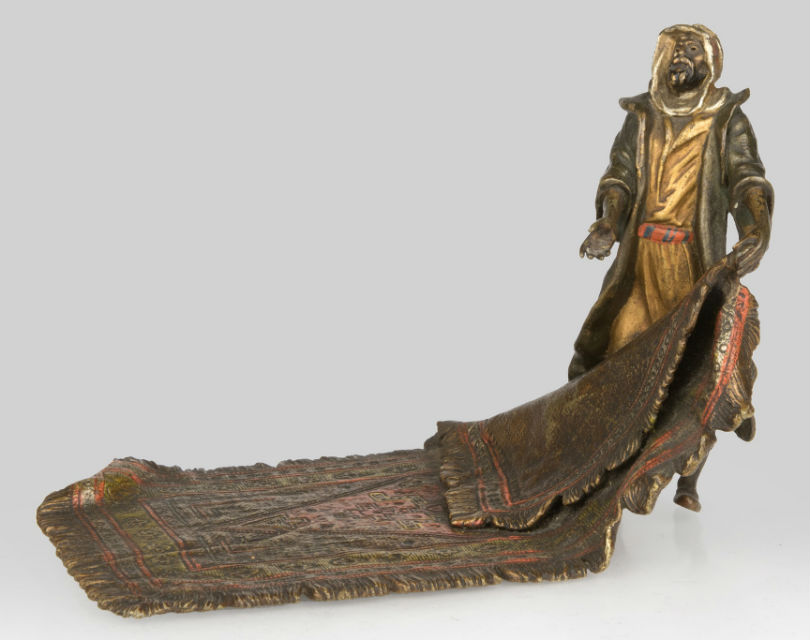 One of a number of collectible cold-painted figural bronzes to be highlighted in Moran’s June 20 auction, this Franz Bergman sculpture is offered with a $900 to $1,200 estimate. John Moran Auctioneers image

The auction will start Tuesday, June 20, at 4 p.m. Pacific time.