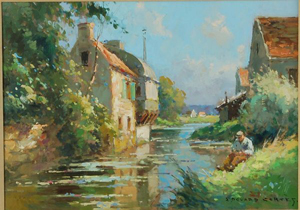 Other highlights in the 750-lot sale, which will feature live Internet bidding through LiveAuctioneers.com, are a fine pair of John Bennett pottery vases and the first U.S. Beatles record, My Bonnie, by Tony Sheridan and the Beat Brothers. Also featured in the auction inventory are the Charles D. Morris ice cream collection and the Raymond A. Farr nautical collection.

Thursday’s session will feature the late Mr. Farr’s 50-year ice cream and soda fountain collection comprised of ice cream dippers, trays, signs, freezers, milk shake mixers and more. The more than 500 ice cream dippers in the collection include several rare examples, including the Manos Novelty Co. dipper. With its unusual heart-shaped bowl, the Manos dipper is considered one of the rarest and most desirable of all dippers and is estimated at $5,000-$7,000. It was used to fill special heart shaped dishes, two of which will be offered in Thursday’s sale.
Other dippers of note include White Rapid, Eureka, Bohlig, Mosteller and several novelty banana split and ice cream sandwich dippers. The category is rounded out by a circa-1900 to 1910 ice cream parlor table and chair, and a reverse-painted Dolly Madison ice cream counter sign.

Friday’s session will begin with numismatics. Among many gold pieces is a 1906 Liberty Head $10 coin, a 1908 Saint-Gaudens $20, and an 1882-S Liberty Head $5. Several Carson City silver dollars will also be offered, including an 1892 example.

Books and documents will follow, led by an unusual 1918 copy of James H. Hyslop’s Proceedings of the American Society for Psychical Research, exploring the Smead Case. The case concerned Dr. Hyslop’s work with a Mrs. Smead who said she received communications from Martians. This editor’s copy, estimated at $400-$600, includes original tipped-in drawings by Mrs. Smead showing Martian embroidery, a Martian boat and curtains used in a Martian house.

The rare 45 r.p.m. record of Tony Sheridan and the Beat Brothers is recognized as the first U.S. release to include the Beatles, and features the songs My Bonnie and The Saints. It is estimated at $5,000-$10,000. Another first in the sale’s pop culture category is the 1935 Whitman Publishing Donald Duck comic #978, considered to be the first comic book devoted to Donald Duck.

A fine pair of John Bennett pottery vases tops the ceramics selection. Estimated at $6,000-$8,000, the signed and dated vases feature yellow flowers and red berries on a green ground, and are in excellent condition. A good selection of stoneware will be offered, including Cowden & Wilcox, and James Hamilton, as well as a Southern pottery jug by Georgia potter James Yaughn (1846/49-1925).

Silver is set to offer a variety of sterling and silverplated pieces. Of note is a fine Victorian silver plated epergne with cut glass bowls and a cased set of Peter L. Krider sterling silver salts and spoons. Included in the silver category is a Mark J. Scearce 14K gold Presidential julep cup. Marked under the base “LBJ” for Lyndon B. Johnson, the cup is housed in its original fitted case and carries an estimate of $3,000-$5,000.

In addition to the aforementioned Edouard Cortès paintings, which were purchased by the consignor’s parents at Chicago’s Findlay Galleries in 1956, the fine art section includes a painting of a yawning puppy by John Henry Dolph (American, 1835-1903), which comes from the Estate of Baron Cassel van Doorn. Other paintings of note include a portrait of a child by Raoul du Gardier (French, 1871-1953), a portrait of “Mrs. McCaw” attributed to Thomas Sully (Pennsylvania, 1783-1872), and a landscape by Edward Gay (New York, 1837-1928).

Friday’s session will conclude with the nautical collection of the late Raymond A. Farr of Hummelstown, Pennsylvania. Farr collected avidly throughout the 1970s and mid-1980s and amassed a sizable number of items from Nova Scotia and Maine. Frank O. Braynard, the noted author, artist and maritime historian, used Mr. Farr’s collection and reference archive in several of his maritime books during this time period.

The Farr collection includes ship advertising prints, lanterns, and photographs, plus the star lot: a porthole relic from the U.S.S. Maine. The sinking of the Maine on February 15, 1898 precipitated the Spanish-American War, although the exact cause of why it sank remains a mystery. The porthole appears to have been cut directly from the hull with a 28-inch-square section. Mounted in a fitted wood case with metal display stand, the piece bears a plaque reading: 1898 1912 Air-port Relic USS Maine Secured for Cols. Camp 49 United Spanish War Veterans through the efforts of M.C. Edw. L. Taylor Jr. It is estimated at $3,000-$5,000.

Other lots of note include a deck bench from the S.S. Saint Thomas, a pub table from the R.M.S. Queen Mary, a ship’s wheel from the King Hathaway, a Carlisle & Finch spotlight, and two cannonballs reported to be from the Spanish ship Atocha. Raymond Farr’s complete reference archive will also be sold in several lots. 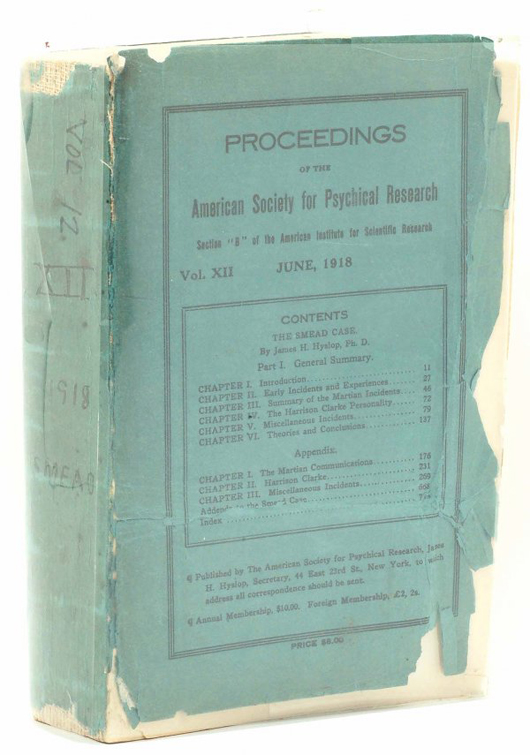 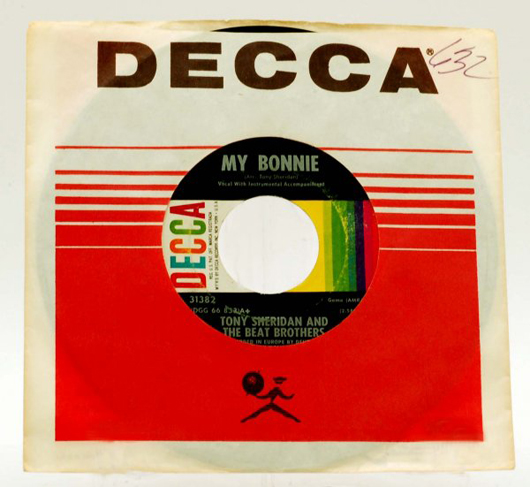 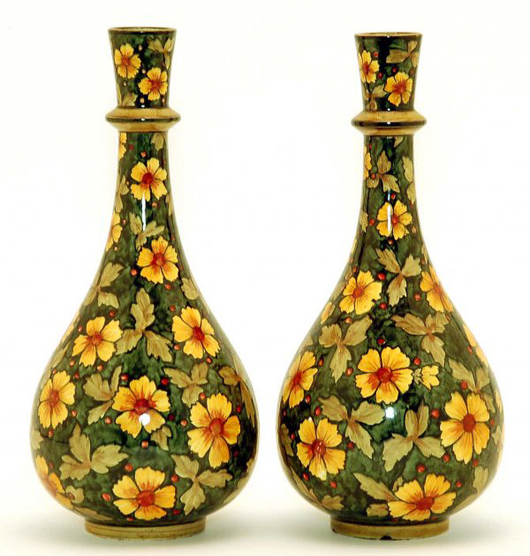 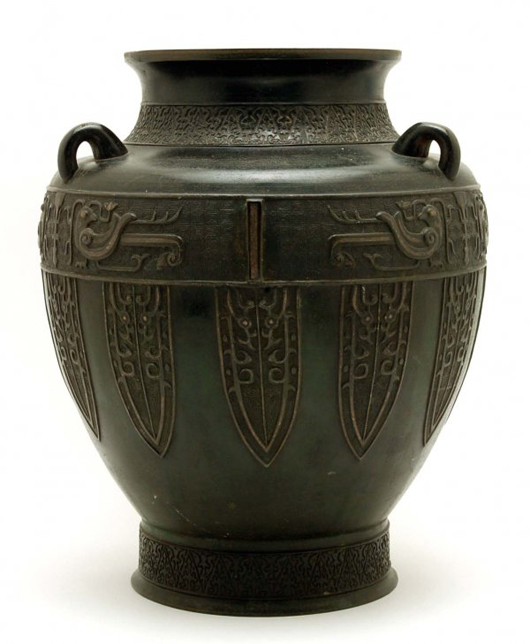 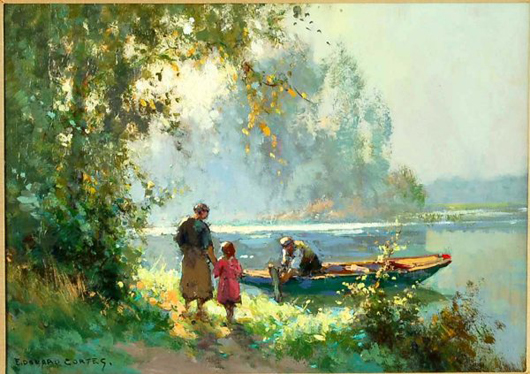 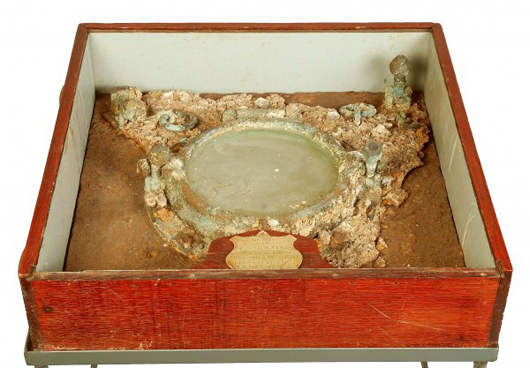