Highlights of the 408-lot sale include WPA paintings by John Stenvall (1907-1998) and Carl Nyquist (1888-1959), a silver presentation pitcher previously owned by the grandfather of Gen. Douglas MacArthur, a girandole convex mirror, a Gee’s Bend quilt, and modern American jewelry.

Congress created the Works Progress Administration in 1935 to provide economic relief for U.S. citizens struggling during the Great Depression. The New Deal era was the first major period of government patronage that would ultimately lead to an extraordinary time for American art. Artists like John Stenvall and Carl Nyquist produced work that emphasized American creativity and values, and these works represent a significant part of our nation’s history.

The American artist John Stenvall has two paintings up for auction. Santa Fe Window, an oil on canvas, is estimated at $10,000-$15,000. Stenvall was a New Deal painter based in Illinois, and this painting is a fine example of his work and emblematic of a style that emerged from his tenure with a WPA project in Chicago. Another Stenvall painting, WPA Veterans Housing Project, is estimated to sell at $4,000-$6,000. This work in the American Regional style depicts the construction of a home for American war veterans.

Carl Nyquist, a WPA artist registered in Tennessee, also has two works up for bid. His painting WPA Scene is expected to inspire keen interest. Estimated to sell between $2,000 and $3,000, the oil on canvas shows four women nursing and caring for their babies. An additional painting by Nyquist is WPA Era Street Scene. Expected to draw between $2,000 and $3,000, this fine work depicts Tennessee cotton pickers. This painting was formerly a mural executed for a post office in Bolivar, Tenn.

A presentation coin silver pitcher previously owned by Arthur MacArthur, the grandfather of World War II Gen. Douglas MacArthur is another item up for bid. Estimated at $2,000-$3,000, this 19th-century presentation pitcher has a spherical form with repoussé and chased leaves, flowers and a center reserve with the engraving.

A Classical giltwood girandole convex mirror is expected to draw $4,000-$6,000. These Federal-style mirrors, often called girandole mirrors, derive their name from the candle arms, called girandoles, which were originally attached to wall mirrors to reflect light into a room. Circa 1800-1810, this item is composed of white pine and gesso. It is has a circular frame and is carved with a gilt wooden eagle at its apex.

Later examples of American folk art are also highlighted. A 20th-century Gee’s Bend quilt is estimated to sell at $1,500-$2,000. Gee’s Bend is a small rural community along the Alabama River that has received recent acclaim for its striking quilts made by local women. The women of the area developed a characteristic quilting style based on traditional American and African American quilts, blended with a geometric simplicity and bold use of colors, suggestive of modern painting. Each quilt is unique and individually produced. The item up for auction is handmade of cotton with a pattern of four, large concentric circles. It is constructed from multiple folded triangles applied in an upright position creating texture and depth.

Modern American jewelry is another component of the auction. A marquis Ceylon sapphire and diamond ring is estimated at $5,000-$7,000. This item is an 18k yellow gold ring with a marquise-shaped natural Thailand sapphire. 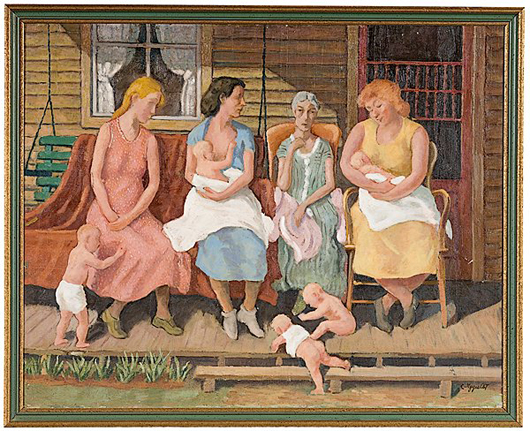 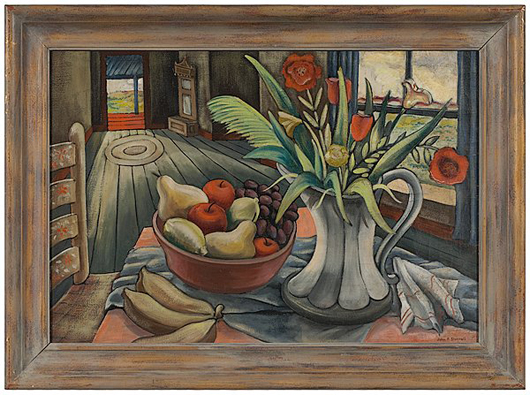 ‘Santa Fe Window’ is emblematic of a style that emerged from John Stenvall’s tenure with a WPA project in Chicago. The signed oil on canvas, 23 inches by 34 1/2 inches, has a $10,000-$15,000 estimate. Image courtesy of Cowan’s Auctions. 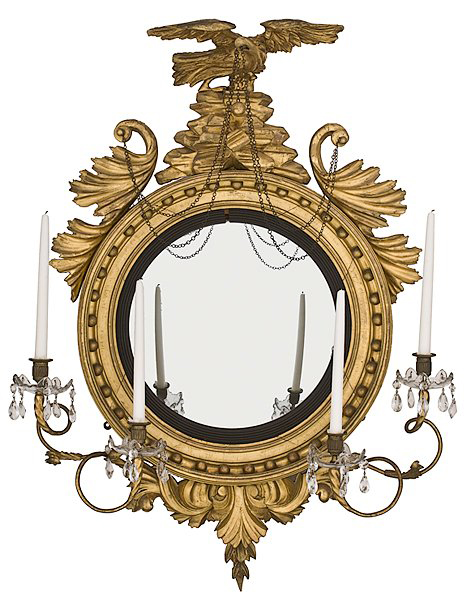 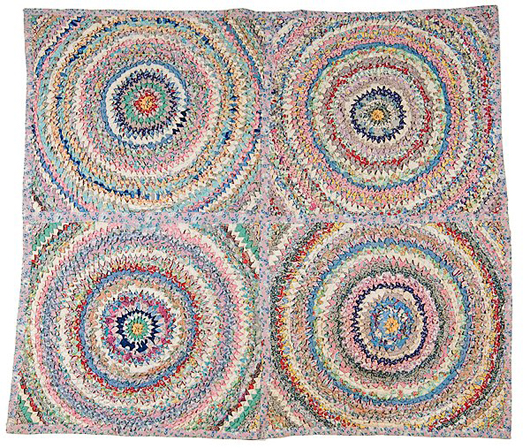 This Gee’s Bend quilt represents a rare variation on the Pine Burr or Pine Cone pattern, the state quilt of Alabama. It measures 82 inches by 69 inches and has a $1,500-$2,000 estimate. Image courtesy of Cowan’s Auctions.