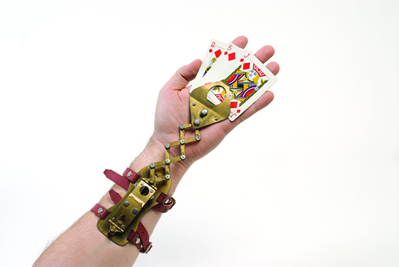 Seldom do devious devices of this nature come up for auction, let alone private sale.

“We’ve occasionally offered rare and collectible cheating devices in past auctions, and they’ve always attracted considerable interest” said Gabe Fajuri, president of Potter & Potter, “but this is our first auction that will feature many of these secret devices.”

A variety of holdouts – mechanical devices worn on the operator’s arm to secretly deliver cards to or take cards from the gambler’s hand without the knowledge of other players at the table – will be offered. One highlight of the auction will be a scarce holdout table (est. $3,000/$5,000) – an apparently innocent card table that secretly delivers a card into the operator’s hand, giving him a supreme edge in any card game.

Some material in Potter & Potter’s sale comes directly from the back rooms of Hunt & Co., one of the best-known makers of gambling equipment – both crooked and straight – of the 20th century. These include a precision-made steel Dice Shaver that can subtly modify dice (est. $1,000/$1,200); an Alnico Dice Charger used by Hunt & Co. to secretly polarize the ferrous material in crooked magnetic or “mag” dice; and a “Ferris Wheel” dice shaver.

Other curious items in the sale include a marked card detector – an optical device used to detect “I.R.” ink on the backs of playing cards; two Juice Joints, electromagnetic devices hidden inside tables which can control the roll of magnetic dice; a gaffed carnival game known as a Camelback Arrow; and tap dice, dice with weights concealed inside which the operator can control.

Rare books on cheating and gambling will also be featured. Chief among these is a first edition of S.W. Erdnase’s Expert at the Card Table (est. $2,000/$2,500). First published in Chicago in 1902, the book has never been out of print, yet fewer than 100 copies of the elusive first edition are known. An aura of mystery surrounds the true identity of the author, which to this day, remains a mystery despite repeated attempts by scholars, journalists and private detectives to determine it. Other important and early works on gambling and card playing dating back to the 18th century will also be offered.

But not everything in the auction will be of the crooked variety. Also offered will be a choice assortment of roulette wheels, slot machines, faro dealing boxes, playing card and gambling-themed novelties and decorative objects, punch boards (straight and crooked), card trimmers and rounders and gambling ephemera.

Complementing the gambling material will be an array of rare and collectible books and periodicals about magic tricks and magicians.

“Like Erdnases’s book, this auction will be divided into two categories,” Fajuri said. “The first will be the card table artifice material – the gambling devices, both straight and crooked. After that comes the legerdemain.”

Among the magic books will be 18th- and 19th-century instructional texts in English and foreign languages, as well as numerous limited edition and collectible publications from every decade of the 20th century. 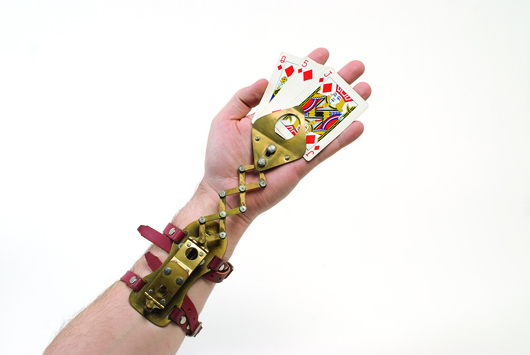