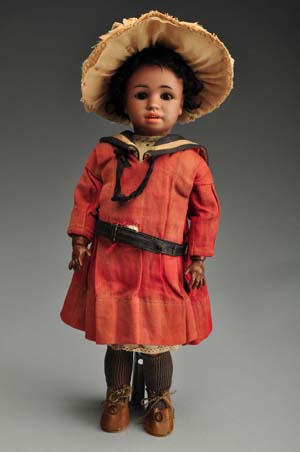 “Helen has always been very discriminating in her buying, and it is a very clean, well-cared-for collection,” said Foulke. “She looked for dolls that were a little bit different – that had an unusual mold number or something else to distinguish it.” Foulke noted that the collector also favored Gebruder Heubach dolls.

The all-bisques in the collection include both French and German examples, some with jointed elbows and knees. Additionally, the collector acquired French fashion dolls. One of the treasures in this category is a Bru fashion doll with jointed wood arms, which comes complete with its original box.

“Helen has always liked for her dolls to be fully, correctly dressed,” Foulke continued. “If they were not fully dressed, she would make the clothes herself. They were always very authentic and beautifully done.”

Several French bebes will be offered in the auction, as well. All are in original condition, including a Jumeau that retains its original box.

Among the most prized items in the collection are a black bisque Simon & Halbig #1358 – which is a premier example amongst black dolls – and a very rare circa-1830s papier-mache doll with a molded bonnet and glass eyes.

Among the German character dolls are a rare Heubach with molded bonnet, several Heubach pouty characters, and an elegant Heubach lady that is rather difficult to find. Another coveted character doll is the N & T girl with molded hair that Foulke says is “a very large size – I’ve never seen one in this size before.” Also to be auctioned are a Dressel pouty character and a Kley & Hahn #546 character with glass eyes.

Another auction highlight is a rare, circa-1850s German china doll with glass eyes.

Two-faced rarities include a Kling lady doll whose painted-on eyes render the impression of being asleep on one side and awake on the other; and a large Max Schelhorn “crying” doll.

The Burton collection also features a pair of highly desirable wax dolls of the French juvenile-literature characters Jean Qui Rit and Jean Qui Pleure – “Jean Who Laughs” and “Jean Who Cries.” The duo will be sold together with a storybook containing the tale of the two boys. Similarly, the collection contains a pair of bisque busts replicating the same characters.

Other wax dolls in the collection include a lady with molded gloves and a boy doll in sailor’s costume. “The little buy is possibly supposed to be one of the grandsons of Queen Victoria,” said Foulke.

Also included is an extensive array of sewing items: antique sewing kits and a few very lovely doll-size sewing cases on legs. One is a 19th-century wood case that opens up like a desk, while the other is of wicker.

A second collection consigned to the June 11 sale consists of American cloth dolls. Three of the highlights are an Izannah Walker doll, a black stockinette and an Alabama Baby. A third consignor was the source for a collection of charming R. John Wright dolls, including an elusive Teddy Roosevelt.

The auction offering is rounded out by a group of 1870s-era Peterson’s fashion magazines, figurines, a few piano babies and several small mechanical dolls.