This U.S. Army uniform was worn by Gary Cooper in his Academy Award-winning role as Alvin C. York in Sergeant York. Pre-auction estimates are $20,000 – $30,000. Image courtesy of Profiles in History.

BEVERLY HILLS, Calif. (ACNI) – For pop culture enthusiasts whose collecting inclinations lean toward the great moments in film history, it’s hard to imagine a more target-rich environment than The Debbie Reynolds Collection, which will be auctioned on June 18, 2011 at The Paley Center for Media in Beverly Hills under the auspices of Profiles in History. LiveAuctioneers.com will provide the Internet live bidding.

Among the more than 3,500 items included in the collection are props, costumes and memorabilia from the Golden Age of cinema, which Reynolds has amassed over five decades. Even by star power alone and not allowing for the connection to specific films, the list of names represented would make this a collection of note, but when taken in total it’s hard to imagine an offering of this size and scope coming on the market again.

Ranging from the silent era to the 1980s, the offerings include many different genres and span multiple remakes of such classics as Mutiny on the Bounty, Cleopatra, and Ben-Hur. In addition to the staggering assortment of costumes, the collection also includes movie cameras from various eras, set pieces, prop miniatures, one-sheets, three-sheets and other movie posters, rare lobby cards, set designs and costume concept illustrations (including work by famed costumer Edith Head), contracts, correspondence, scripts and other specialty items. Selections are also available from the personal effects of such stars as Mary Pickford, Marion Davies, and W.C. Fields.

Whether one collects film or performer-centric items, it is clear that The Debbie Reynolds Collection benefited from Reynolds’ insider position in Hollywood. It is almost just as certain, though, that her eye for great pieces and understanding of film history paved the way for her efforts, which began in earnest in the late 1960s and early 1970s and grew to include the goal of eventually opening a museum for the material.

A native of El Paso, Texas, Reynolds’ show business career began at age 17 when she won the local Miss Burbank beauty pageant. This, in turn, led to a contract at MGM Studios and a career that included films such as Singin’ in the Rain and her Oscar-nominated performance in The Unsinkable Molly Brown, and after 62 years in the business she continues to perform in film, on television, and on stage regularly.

“My love for collecting began early in my MGM career. I used to spend my spare time in the wardrobe department, watching the most talented people create costumes for the actors. I was fascinated by how they were able to translate a simple suggestion in a script, sometimes even a piece of dialogue, into a magnificent costume. I loved everything that went into the process – the sketches, the fabrics, the construction,” Reynolds wrote in her introduction to the auction catalog.

She said her passion for collecting was fueled when the big studios broke up their inventories.

“In 1970 MGM announced it was going to auction off everything except their real estate. I was still under contract at MGM and knew this inventory well. These were the clothes that the studio wouldn’t even lend us to wear to events or parties. Prior to this auction, I was a ‘normal’ collector. After the auction, preserving as many of these costumes as possible became my obsession,” she said.

“After MGM’s auction, the other studios followed suit. I was very for¬tunate that I knew the president of Fox Studios, who allowed me to purchase many items prior to their auction. Over the years, I continued to save as many pieces as I could as the studios threatened their very existence,” she said.

In addition to her comments, the catalog opens with an introduction by writer-producer-director George Lucas, and a note from daughter Carrie Fisher. It then immediately dives into movie history with a Bell and Howell 2709 35 mm motion picture camera circa 1915, Rudolph Valentino’s “Juan Gallardo” signature “Suit of Lights” matador outfit by Travis Banton for the 1922 Blood and Sand, Mary Pickford’s “Dorothy Vernon” period hat from Dorothy Vernon of Haddon Hall, Francis X. Bushman’s “Messala” historic winged charioteer helmet from the 1925 Ben-Hur: A Tale of the Christ, Harold Lloyd’s personal blue suit with signature straw hat dated 1928, a Mitchell Standard Model A 35 mm motion picture camera circa late 1920s, and a 1918 Ford Model T used in Laurel & Hardy films.

The Paley Center for Media is open to the public for previews now through Friday, June 17, from 12 noon to 5 p.m.

The auction begins at noon Pacific Time on Saturday, June 18. View the fully illustrated catalog and sign up to bid absentee or live via the Internet at www.LiveAuctioneers.com.

One of the most iconic images of the 1950s depicts Marilyn Monroe in what is known as the “subway” dress, worn in The Seven Year Itch (20th Century Fox, 1955). Bidding in the range of $1 – $2 million. Image courtesy of Profiles in History.

Worn by Judy Garland during the first two weeks of filming for The Wizard of Oz (MGM, 1939), this outfit is expected to bring $60,000-$80,000 in Profiles in History’s auction of The Debbie Reynolds Collection on June 18. Image courtesy of Profiles in History. 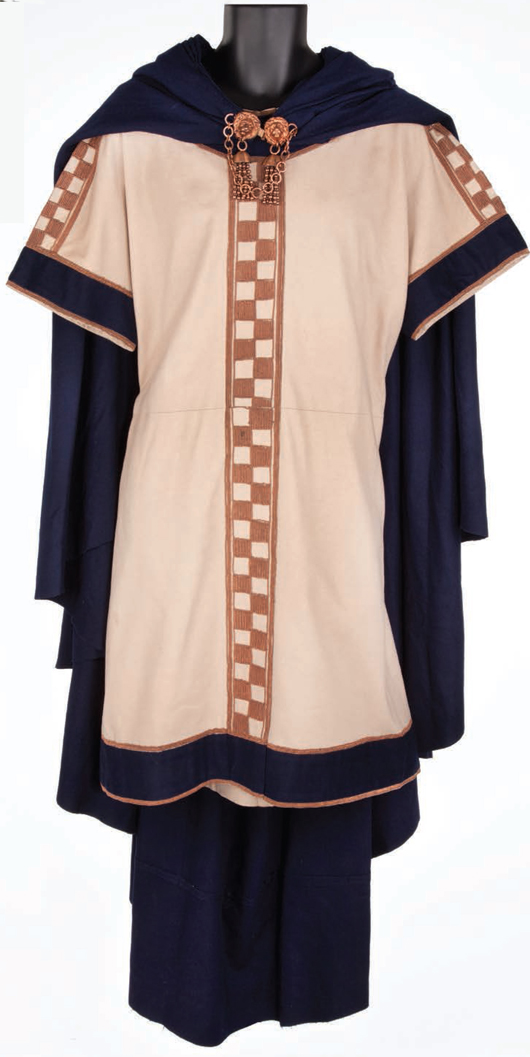