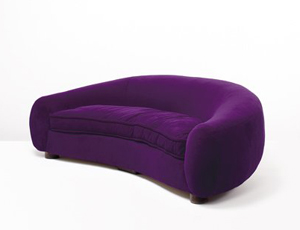 NEW YORK – Building on the success of the recent April London Design sale, Phillips de Pury & Co. has announced highlights from its New York Design sale to be held on June 3, 2009. The auction includes 128 lots with a total presale estimate of $2.7M-$3.7M. Live Internet bidding will be provided by LiveAuctioneers.com.

This sale offers an array of highly select works with a focus on rare and important examples from eminent 20th and 21st century designers. The Design department has broadened its collecting categories to integrate key areas such as contemporary ceramics, Italian glass and artists’ jewelry.

Alexander Payne, Worldwide Director of Design for Phillips de Pury, commented: “In this market on both sides of the Atlantic, the demand is for exceptional, hard-to-find works. This sale meets the criteria.”

Jean Royère’s Ours Polaire sofa, circa 1950, estimated at $180,000 to $220,000, takes its cue from a slumbering polar bear’s round shape and exemplifies the designer’s surrealist sense of humor. Other examples of Ours Polaire sofas have consistently achieved the highest prices among all of Royère’s work on the secondary market. In Phillips de Pury’s April Design sale in London, an important Royère armchair sold for $153,475, more than twice the high estimate.

Jean Prouvé’s Trapèze table exemplifies the designer’s legendary use of sheet metal cantilevered by internal load-bearing supports. It was commissioned and built in the late 1950s for the Commissariat à l’Énergie Atomique (C.E.A.), a French government-funded defense and energy research organization. Prouvé created fifteen known examples of this table in seven variations for the C.E.A. The presale estimate for the example to be auctioned is $150,000 to $200,000.

A designer of furniture, sculpture and jewelry with surrealist inclinations, Claude Lalanne first created her whimsical Grains de Café side chairs, circa 1965, for Olivier de La Baume, director of the French coffee company Maison du Café. The 12 chairs, estimated at $180,000 to $220,000, are supported by curvilinear brass and steel frames, and are fitted with leather pads styled in playful homage to the coffee bean. The Centre Pompidou included a Grains de Café chair in its 2004 exhibition Mobilier National 1964-2004: 40 Ans de Creation.

George Nakashima’s Monumental “Conoid” dining table was designed in 1989, just one year prior to his death. Nakashima’s career crested during his twilight years, and this Conoid table, estimated at $150,000 to $200,000, is an example of his finest work, featuring 15 of his signature rosewood keys which anchor the walnut boards and natural surface fissures. This table will be offered together with its original drawing.

Phillips de Pury & Company will introduce to the market significant, custom-built works by Paul Evans and Phillip Lloyd Powell, two American studio designers from New Hope, Pa., who frequently collaborated on commissions. In the 1960s, the artists designed several pieces for the private Manhattan residence of Dr. Alfred L. Jones. Paul Evans designed his unique, custom-made illuminated cabinet bar, circa 1963, estimated at $80,000 to $120,000, for Dr. Jones’s wine collection. Evans was well known for using multiple materials and techniques within a single piece, and this cabinet bar, with its varied treatment of steel, wood, gold leaf and bronze, is a testament to his distinctive handiwork.

Additional highlights include an important and rare table by Pierre Jeanneret for Le Corbusier, a pair of lamps by Alberto Giacometti, and a Bush sculpture by Harry Bertoia, which join the offering of seminal Mid-Century works.

Two chaise longues designed by Ron Arad, After Spring and Before Summer, balance between sculpture and functional furniture. It is a rare occasion for these two pieces to be in the same sale, for their titles, when read side by side, suggest a paradoxical moment between two seasons. A forthcoming 2009 exhibition at MoMA in New York will showcase the designer’s range of poetically charged and technologically innovative work. After Spring and Before Summer, both from 1992, are offered as separate lots, each with a presale estimate of $130,000 to $150,000.

Marc Newson is a designer known to utilize an economy of means to achieve a maximum sense of volume, or in the case of his Black Hole table, 2005, a sense of infinite void with three holes sinking into the table’s three legs. Black Hole, estimated at $100,000 to $150,000, is to be included in the forthcoming Marc Newson catalogue raisonné of limited editions organized by Galerie Kreo in Paris.

Zaha Hadid’s Swash cabinet, estimated at $70,000 to $90,000, is from her 2006 Seamless collection for Established & Sons, first exhibited at Phillips de Pury & Co. Hadid has created a series of work around the concept of fluidity in which forms and line dissolve into the surroundings.

French artist Lilian Daubisse conjures animal spirits, ritualism and theatricality in his Hérisson, 2004, or “Hedgehog” waistcoat. This corrugated cardboard piece straddles both fashion and performance and is reminiscent of Nick Cave’s Soundsuits. Hérisson has a presale estimate of $20,000 to $30,000.

The proceeds from the sale of Philip Michael Wolfson’s Genoa desk, 2007, will benefit the Make It Right Foundation, founded by Brad Pitt to aid in the reconstruction of New Orleans in the wake of Hurricane Katrina. Phillips de Pury & Co. previously donated proceeds to Pitt’s foundation in June, 2008 after the sale of Wolfson’s Unique LineDesk PINK, which garnered $22,500. The presale estimate for the Genoa desk is $18,000 to $24,000.

The New York sale presents 22 lots from the ceramics collection of Ellen and Dixon Long. Starting in 1987, the Longs adopted an open approach to collecting the finest available works from a broad range of ceramists. Dixon Long writes about his experience collecting with his wife: “In every case I was looking for a signature work by a celebrated or highly regarded artist. This suggests that when collecting with my wife, while she was still living, I was more adventuresome. That is absolutely true. She and I had a rule: we had to agree on every purchase, but if one of us developed an irrational crush it was
okay to go ahead alone.”

The collection also includes 17 ceramic pots by Lucie Rie, a master 20th century potter with a serious and growing collecting base. Her career has been well documented in many books and in her impressive exhibition history including the recent 21 Design Sight Museum exhibition in Tokyo titled U-Tsu-Wa. The National Museum of Modern Art, Tokyo will present a future exhibition dedicated to Rie’s timeless craft.

Fulvio Bianconi was among the most outstanding of Venini’s designers during that studio’s creative apex in the 1950s. During this celebrated period he produced this important and rare Macchie vase, estimated at $30,000-$40,000.

The June Design sale includes a rare and innovative Adam necklace, 1987, by Gijs Bakker, one of the founding visionaries behind Droog, the renowned Dutch design collective. The Adam necklace has a presale estimate of $24,000-$28,000.

Line Vautrin is well known for her mirrors circumscribed by glass and metal, but she began her career as a jewelry maker creating pieces with a fanciful touch. The Planets necklace, circa 1950, is no exception with its emblazoned medallions designed to orbit the neck. This rare work, estimated at $25,000 to $30,000, is one of only five known examples produced.

For additional information on any lot in this sale, call 212-940-1269. To view the fully illustrated online catalog or to sign up to bid absentee or live via the Internet on auction day, log on to www.LiveAuctioneers.com. 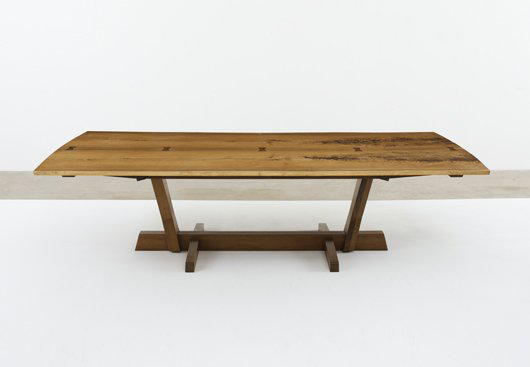 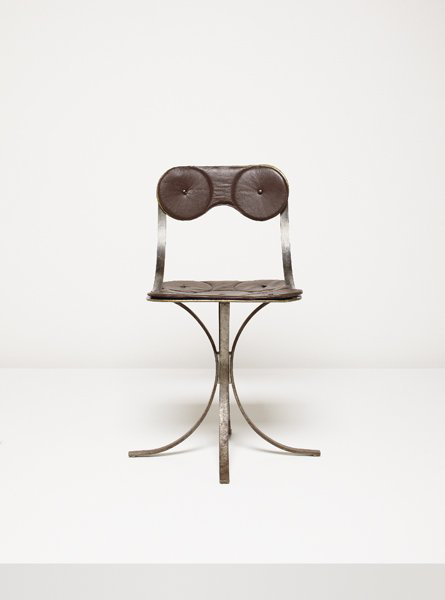 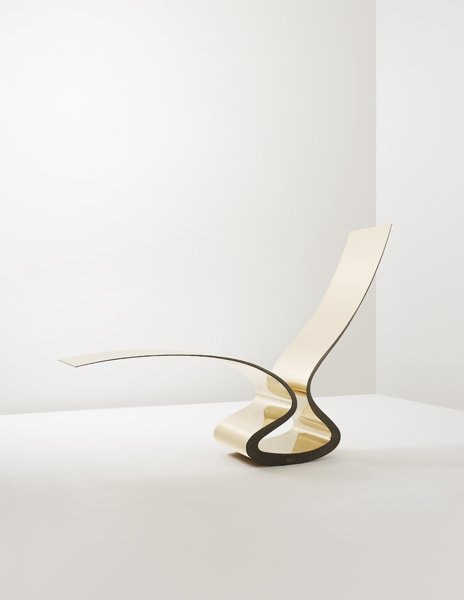 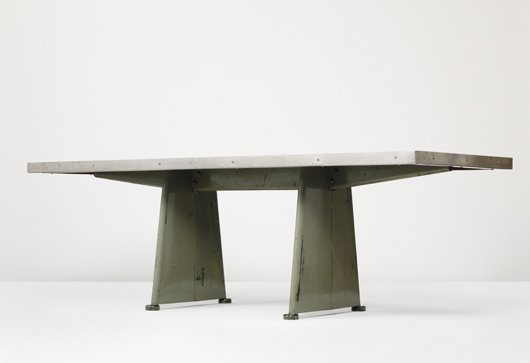