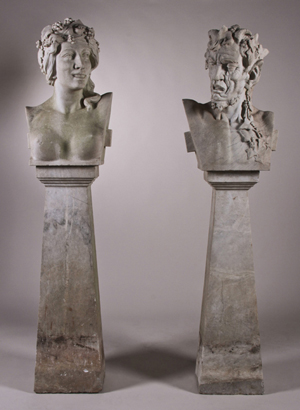 The Italian-born Barbieri (1878-1956) held more than 100 patents, including one issued in 1926 for conical Dixie Cups and the machinery that manufactured them. He also possessed a finely tuned eye for classical art and design.

“He bought the best of everything for his multiple residences, but he was also very generous toward others,” said Myers co-owner Mary Dowd. “His will provided for the establishment of a Dixie employee pension fund, and his Dixie Cup royalties funded an endowment for Italian cultural studies at Trinity College that continues to this day. He also helped to finance the post-World War II reconstruction effort in his hometown of Bologna, Italy.”

Barbieri’s largesse extended to those who cared for him in his declining years, in particular his nurse and companion Anita De Paulis. Barbieri bequeathed to De Paulis the entire contents of both his lavish Manhattan apartment and Villa Barbieri, his estate in Tuxedo Park, N.Y. De Paulis retired to a town near Sarasota, Fla., and after her death in 2011, Myers acquired the Barbieri collection directly from the De Paulis Estate.

Myers has a policy of only conducting a European & Asian Art auction when a collection of exceptional quality is available to headline such a sale. The 480-lot Feb. 10 event is the first of its type to be scheduled in two years and consists of fresh goods acquired almost exclusively from estates.

The featured Barbieri collection includes magnificent paintings, bronzes, antique clocks, Oriental rugs, furniture and carved ivories. Among the top pieces is a graceful marble nude titled “The Flower of the Alps,” by Attilio Piccirilli (Italian, 1886-1945). A similar Piccirilli sold a few years ago at Sotheby’s for $19,000. Myers Fine Art has placed an estimate of $10,000-$15,000 on the signed Piccirilli in their sale. A signed Giuseppe Gambogi (Italian, 1891-1965) statue of Shakespeare’s “Ophelia” carries an estimate of $8,000-$10,000.

An extraordinary artwork from Villa Barbieri, “Portrait of Gabrielle de Bourbon,” depicts the 26-year-old daughter of Louis I, Count of Montpensier, a direct descendant of Saint Louis (1214-1270). The richly detailed portrait, created possibly as early as the 15th century, exhibits an extremely high standard of artistry, evident by the level of detail in the sitter’s ornately embroidered silk dress and ermine-trimmed robe. A gold figural pendant adorns her pearl-trimmed bodice, and pearls embellish her Renaissance cap. The 17 by 12½-inch painting is presented in an elaborate gilt tabernacle frame from the late-18th or early 19th century. It is expected to make $4,000-$6,000.

Other Continental artworks in the sale include an 18th/19th-century French portrait of a lady holding a Cavalier King Charles spaniel, a Charles Cousin (French, 1904-1972) Venetian canal scene, and a J. Eisenhut oil painting of a Venetian doge. Additional enticements include an Italian pietra dura specimen table and micromosaic pieces; French cameo glass, majolica, silver, Louis XV bronze candelabra, and Austrian ivory and wood figures. There will also be fine European porcelain, an inlaid Italian marquetry chest and antique Italian walnut cupboard; and a pair of French Empire bronze table lamps. A Continental relief-carved ivory plaque depicts a frenzied battle scene of warriors on horseback. Dating to the mid-19th century and possibly from Dieppe, France, it is estimated at $3,000-$5,000. Another standout is a signed Tommaso Gentile (Italian, 1853-?) bronze mirror adorned by two nude women. It bears the Kunst-Erzgieserei Vienna foundry mark and is estimated at $6,000-$8,000.

Timepieces include European mantel clocks, a miniature tall-case clock with chinoiserie artwork, and a highly desirable tall-case clock with Joshua Wilson (London) 17th/18th-century movement in a Philadelphia Chippendale walnut case. The musical moon phase clock stands 95 inches tall and, although missing some of its mechanical parts, is likely to achieve $4,000-$6,000.

The sale’s extensive Asian section covers all imaginable forms and media. Ceramics include Japanese Imari, antique Chinese hand-painted plates and a pleasing selection of Chinese export porcelain. Among the carved figural pieces are a 77-inch oxblood Buddha, an ivory Siddhartha bust, jade and hardstone objects, and numerous Chinese and Japanese ivories. Other highlights include a Japanese inlaid and carved screen, a set of four Chinese Qing silk paintings, 19th-century Chinese reverse paintings, a pair of yoke-back armchairs, an early 19th-century Kano school 4-panel screen painting, and an array of Asian bronze and mixed-metal vessels and other items.

Not to be missed if one is considering the renovation of a special room is the lot containing more than 25 rolls of Zuber et Cie. (French) panoramic wallpaper in the “Views of North America” pattern. The rolls were printed from Zuber’s original 19th-century woodblocks.

“In the 1970s, Jacqueline Kennedy chose the very same wallpaper for the White House Reception Room,” said Mary Dowd. “It depicts American scenes such as Boston Harbor, Niagara Falls, and Natural Bridge in Virginia. The rolls we are auctioning are in perfect condition. They were ordered from Zuber in the 1970s but were never installed.”

The garden and architectural category is led by a 19th-century marble bench side support depicting a winged mythological creature, and an impressive pair of 19th-century marble Bacchanalian garden herms topped by carved busts of a satyr and nude maiden. Each herm stands 62 inches tall, and together they tip the scales at 1,000+ lbs. Formerly ensconced at a Southampton, N.Y., estate, the pair is estimated at $6,000-$9,000.

Other items of note include a John Wallace (1841-1905) landscape of a hilltop castle, a carved R.J. Horner partner’s desk with carved griffin legs ($3,000-$5,000), 18th-century ecclesiastical vestments, and a chic F.V. Manti (Italian) 18K yellow gold openwork bracelet adorned with women’s faces ($2,000-$4,000). Last but certainly not least, the sale includes a sporty red 2007 Ferrari F430 with less than 3,000 miles on its odometer – a stylish vehicle in which to transport one’s purchases home on auction day.

Myers Fine Art’s Sunday, Feb. 10 auction of European & Asian Antiques & Fine Art featuring the Cesare Barbieri collection will commence at 12 noon Eastern Time. A preview will be held from 10-6 on Saturday, Feb. 9, and from 10 a.m. till noon on auction day. The gallery is located at 1600 4th St. North in St. Petersburg, FL 33704. For information on any lot in the sale, call 727-823-3249 or e-mail auctions@myersfineart.com. 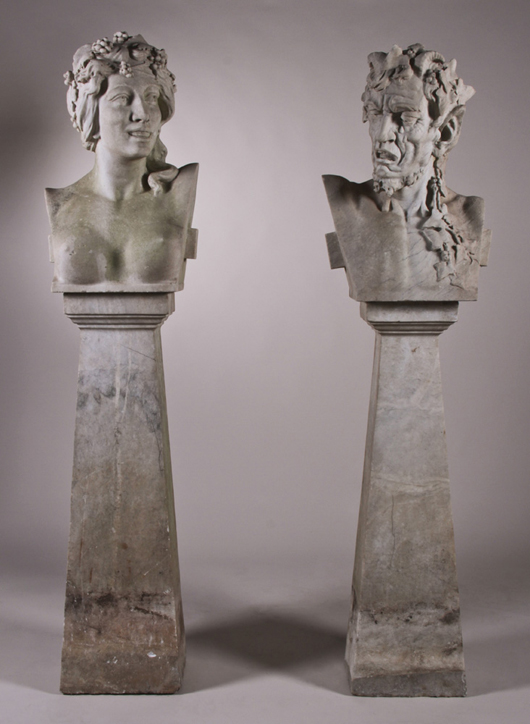 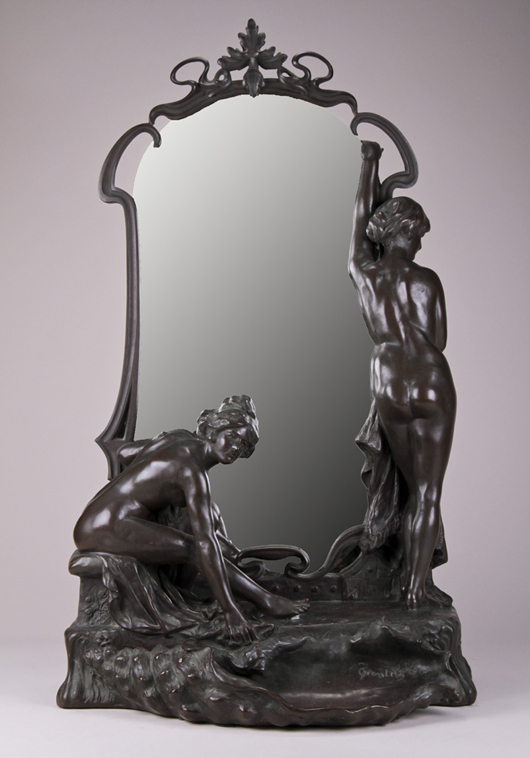 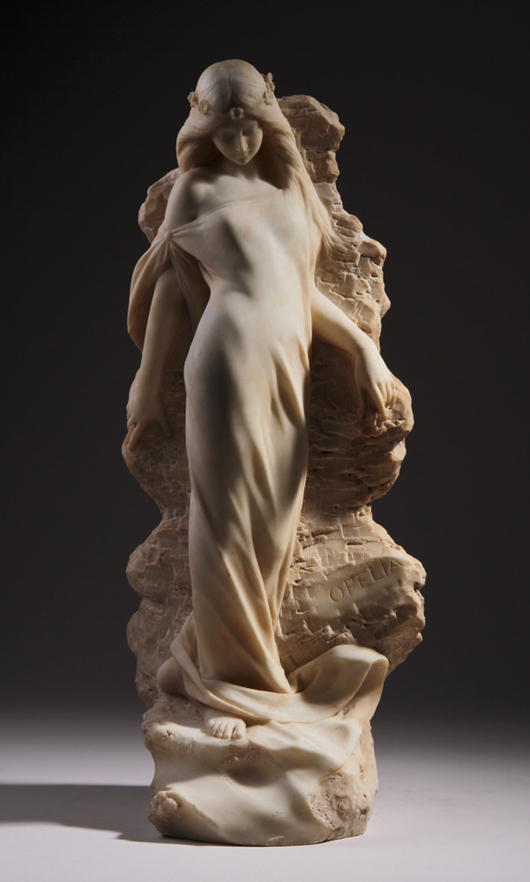 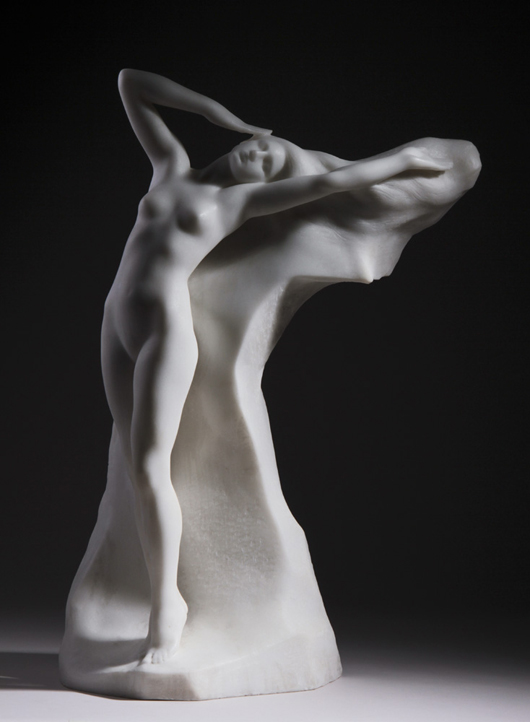 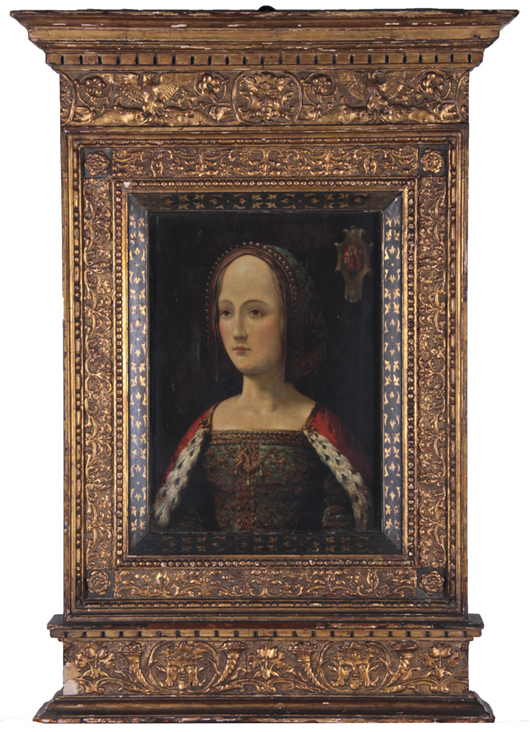 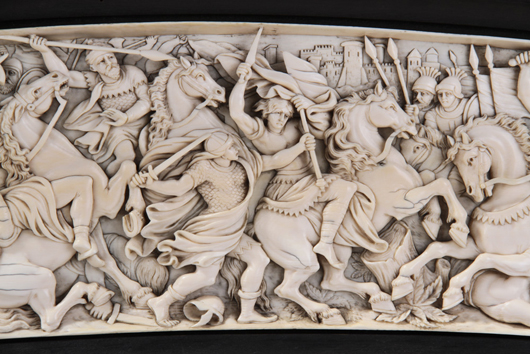 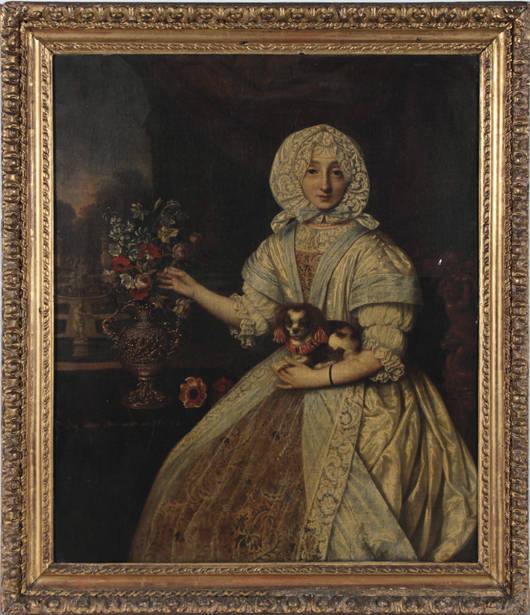 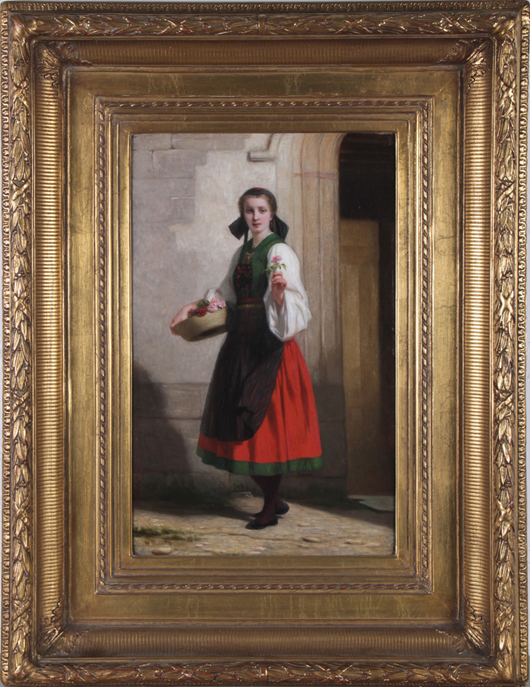 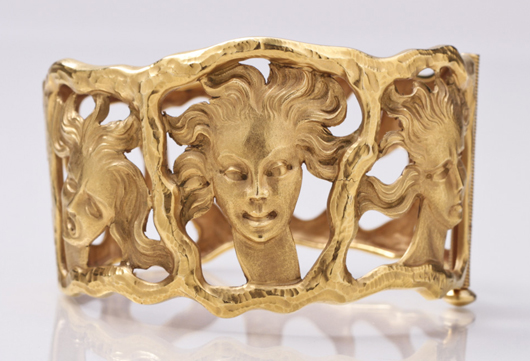 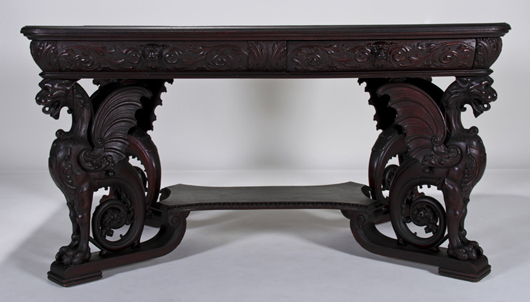 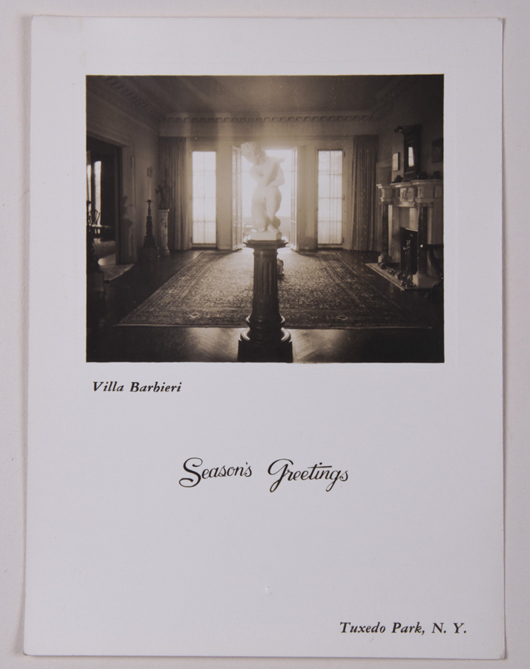 One Christmas during the 1940s, Cesare Barbieri chose a photo of one of the rooms in his Tuxedo Park, N.Y., villa as the main image on his holiday card. The ‘Portrait of Gabrielle de Bourbon,’ in its distinctive tabernacle frame, is displayed above the mantel. Myers Fine Art image. 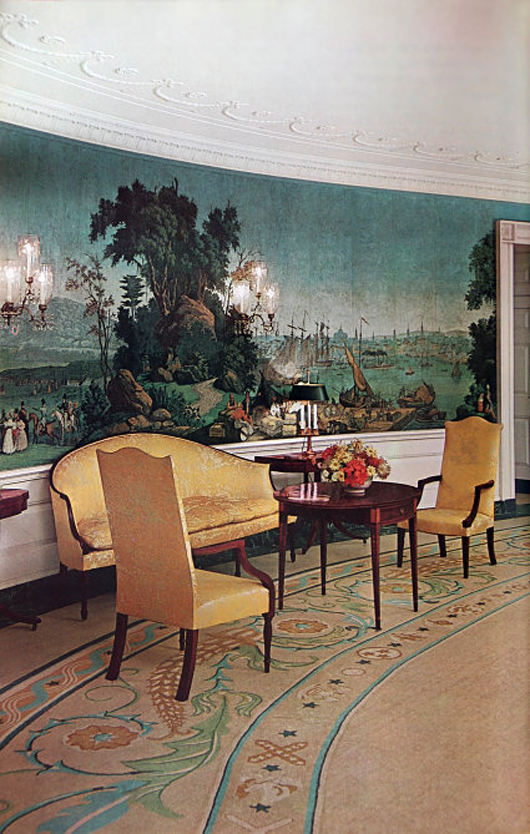 Zuber et Cie. panoramic wallpaper in the ‘Views of North America’ pattern has decorated the White House Diplomatic Reception Room since the Kennedy era. On Feb. 10, Myers will auction more than 25 unused rolls of wallpaper in this very pattern. Myers Fine Art image. 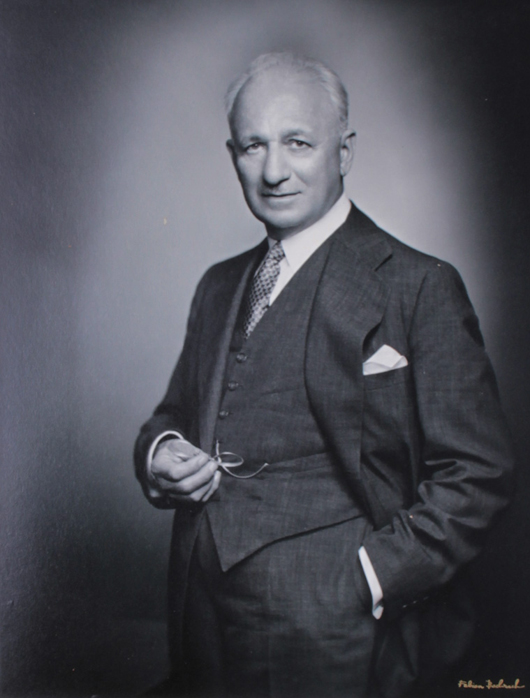