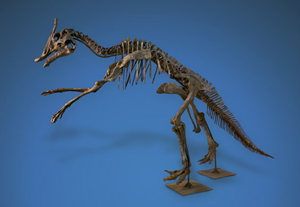 BEVERLY HILLS, Calif. – Arriving fashionably late is nothing new in Beverly Hills, but it becomes big news when it’s a dinosaur who’s making the dramatic, last-minute entrance. In this case, the late arrival is a superb Saurolophus angustirostris known as “Donald the Duck-billed Dinosaur,’ and he just might steal the show at I.M. Chait’s May 6 Natural History auction.

Dating to the Late Cretaceous period, Saurolophus is one of the very few dinosaurs known to have inhabited more than one continent. Found in both North America and Asia, this large species is distinguished by the strange, bony crest projecting back at a 45-degree angle over the skull. The function of the crest has not been determined, but modern studies show evidence that it was hollow, and may have been used either to make sounds or to regulate heat. Estimates of its overall size suggest the Asian species represented here was the largest known at nearly 40 feet long, making it as large as a modern bus.

Saurolophus was a member of the Hadrosaurids, a huge herbivorous dinosaur lineage that includes such famous animals as the “dinosaur mummy” Leonardo, and Hadrosaurus foulkii which in 1858 was the very first dinosaur ever found in the United States, now the state fossil of New Jersey. Like all Hadrosaurs, Saurolophus was herbivorous and possessed a huge battery of chisel-like teeth designed specifically to grind plants to a digestible pulp. It shared its world with a wide variety of other dinosaurs such as the pachycephalosaur Prenocephale, several velociraptor-like Troodontids, Gallimimus the ostrich-mimic depicted in Jurassic Park, and the giant tyrannosaurid carnivore Tarbosaurus.

The first known Saurolophus was described in 1911 from material found in Canada, but more than 30 years passed before new material was found, by the Polish-Mongolian Expedition of 1947. To this day, barely more than 10 skulls are known, and the example in Chait’s May 6 auction is one of only a handful of complete skeletons ever found or mounted, making it one of the rarest of the remarkable, crested Hadrosaurs.

This stunning skeleton is superbly mounted in a dynamic, forward-reaching pose, with superb detail and preparation. The bone which is well mineralized and has beautiful mottled orange and grey color, with a reddish brown patina. It measures 176 inches from head to tail, with a 24 inch skull, and the mount stands approximately 85 inches high by 145 inches long overall: a rare, museum-class, and highly impressive skeleton.

Click to view the illustrated catalog description for this lot and to sign up to bid absentee or live via the Internet at www.LiveAuctioneers.com. 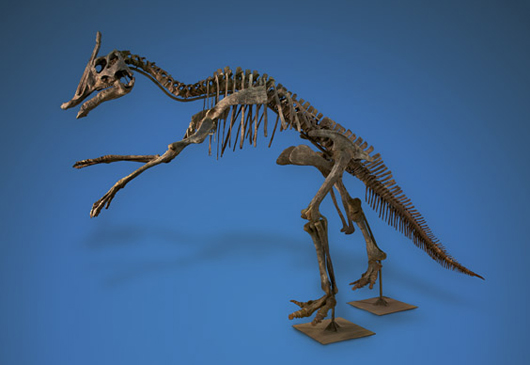 ‘Spartacus’ among nominees for Turner art prize
Scroll to top