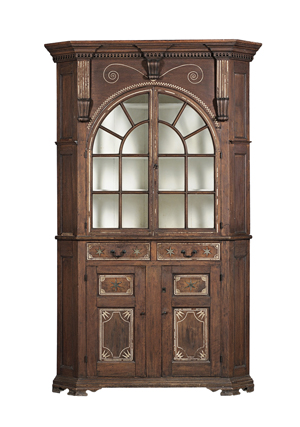 BOSTON – Skinner Inc. will host an auction of American Furniture and Decorative Arts on Sunday, Nov. 7, at 11 a.m. in its Boston gallery. The sale features the extraordinary collection of Arthur E. Beane Jr., which includes early 18th-century painted Massachusetts furniture, Queen Anne and Chippendale furniture from Boston, an assemblage of clocks and 18th-century Rococo mirrors.

Of note in the sale is a rare black walnut carved corner cupboard from Lancaster County, Pa., circa 1790. The consignor’s father-in-law, Dr. Louis H. Mutschler Sr. of Philadelphia, acquired the cupboard when he was married to Lucy Brooks Price. The couple married on Dec. 7, 1907, in Media, Pa., but resided in Philadelphia. Lucy Brooks Price was the daughter of Lucy Adele Brooks and Edward Augustus Price, whose ancestors were among Pennsylvania’s earliest settlers, including Samuel Price, who served on the Committee of Safety and with Chester County Associators during the Revolution. The piece is estimated at $100,000 to $150,000.

Another piece of furniture that’s likely to draw significant interest is a mahogany carved dressing table, possibly by Benjamin Frothingham of Charlestown, Mass. The table was made between 1760-1780 and is estimated at $15,000 to $25,000.

Also of note is a private collection built by Jim and Bernice Miller of Appleton, Wis. The Millers began collecting early Americana in the mid-60s, traveling first from Ohio and Pennsylvania and later to New England to find fine examples of eighteenth and early 19th century American high country furniture and accessories. In 1970, they designed and built the perfect showcase for their collection, a reproduction Connecticut River Valley saltbox. In the mid-1970s they established their own antique dealership, Miller Antiques, which flourished until Bernice’s death in 1999. The collection up for bid includes more than 100 pieces of fine Americana.

Finally, an unsigned 19th-century American school painting, The Great Fire of Utica New York of the Year 1837, will be up for bid as well. The great fire of Utica broke out about 2 a.m. on March 31, 1837 on the second floor of a frame building on the corner of Genesee and Broad streets. The building housed a grocery store, a silversmith, and a jeweler. According to the Utica Observer of April 4, 1837: “… the wind was high from the east and most of the buildings, being of wood (a few have brick fronts), the flames spread with great rapidity, and before the engines could be brought into play, had obtained a mastery that was almost impossible to overcome…” The fire consumed 34 buildings, most of them merchants, and a handful of private dwellings. The painting is estimated at $40,000 to $60,000. 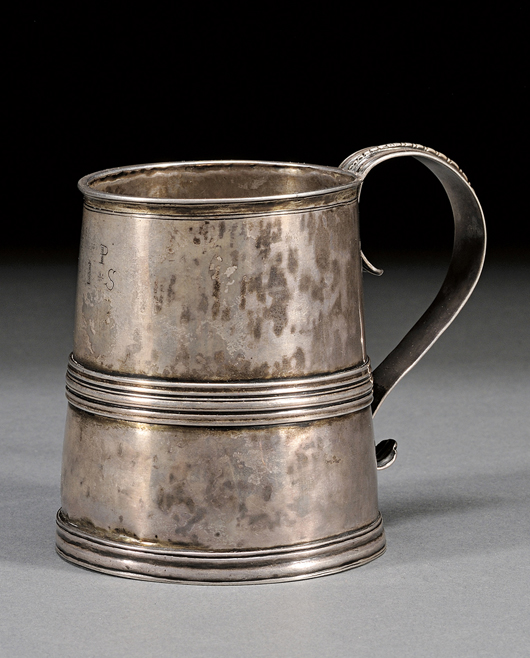 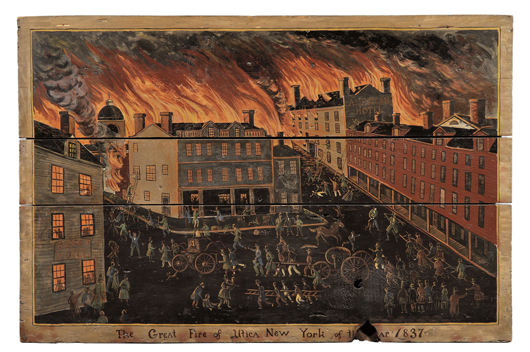 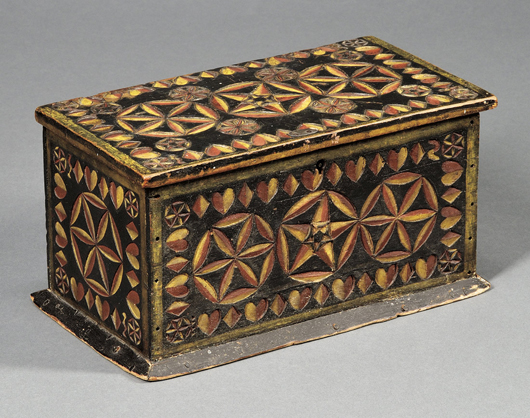