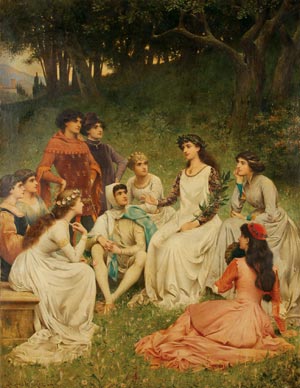 CEDAR FALLS, Iowa – Jackson’s International Auctioneers will host a two-day auction Dec. 2-3 featuring important European and American fine art together with significant Russian works. The sale includes items deaccessioned from the Grandview Trust of Pittsburgh together with property from collections and estates from across the nation. The 1,000-lot sale includes 12th century European works, paintings, bronzes, furnishings and Orientalia.

Following 19th century European paintings is the first of a small but important offering of European works that includes the highlight of the auction: a Limoges champleve enamel gilt copper tabernacle dating to the late 12th or early 13th century. The rectangular tabernacle with pyramidal top with turquoise and dark blue enameled ground set with gilt figures with raised relief elements is 10 inches high and carries an estimate of $40,000-$70,000.

More than 150 lots of Imperial Russian decorative arts and icons will be offered including a scarce breast star and badge of the Order of St. Alexander Nevsky, with swords in its original issuance case, estimated at $25,000-$35,000. Additionally, four gem-set cigarette cases by Faberge in various materials including nephrite and guilloche enamel will also be sold.

A multitude of other exceptional Russian works in silver-gilt and enamel by famous makers such as Ovchinnikov, Sazikov, Saltykov, Sumin and Grachev will be offered. Forms will include boxes, bowls, flatware, cups, cases, kovshi and other objets d’art.

More than 70 Russian icons, circa 1600-1900, will be offered, including a pair of silver-gilt and shaded enamel wedding icons, two cased presentation icons and an exquisite fully enameled silver-gilt icon of the Mother of God. Other icons of note include Imperial workshop-quality icons circa 1900 and a collection of large and impressive Moscow Armory School-style icons, including one example measuring more than 78 inches high.

Old Master paintings will follow Russian works and feature a lovely 16th century Flemish School painting of the Adoration of the Magi, estimated at $18,000-$22,000.

American art will open the second session of the auction, starting with a painting of rolling hills by Iowa artist Marvin Cone (1891-965). The oil on canvas, 15 by 30 inches, retains its original Chicago Galleries Association exhibition label and is estimated at $60,000-$80,000. A large California painting titled The Fading Light, Santa Barbara, dated 1919, by Alexis Matthew Podchernikoff (1886-1933) will follow. Contained in its original gilt frame, it carries an estimate of $5,000-$7,000.

More than 40 fine art bronzes will be featured in the second session, including a large and important group by Albert-Ernest Carrier-Belleuse (French 1824-1887). Depicting Leda and the Swan and measuring 17 by 24 inches, it carries an estimate of $10,000-$15,000.

A collection of more than a dozen19th century hand-woven Oriental rugs includes a rare Caucasian Kazak prayer rug, circa 1865 and in excellent condition, estimated at $18,000-$24,000.

An extensive 197-piece set of Georg Jensen sterling flatware will be offered, as well as other fine silver, including 18th century English examples such as a Hester Bateman jug, a John Denzilow hot water urn and a Daniel Pontifey coffee and tea service.

A monumental Dresden porcelain clock and urn garniture measuring 32 inches high and covered with sculpted cherubs, florals and hand-painted scenes will be sold carrying an estimate of $8,000-$12,000.

Closing out the auction will be a fine collection of Orientalia featuring carved ivory, snuff bottles, gilt bronze deities and export furniture. 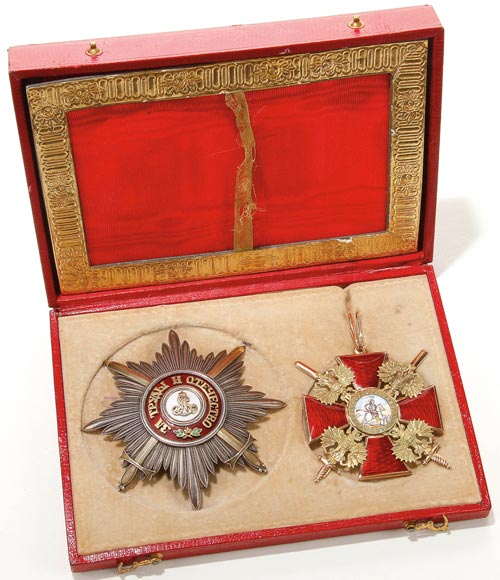 Russian curios include this breast star and badge of the Order of Alexander Nevsky, which are estimated to sell for $25,000-$35,000. Image courtesy Jackson’s International Auctioneers. 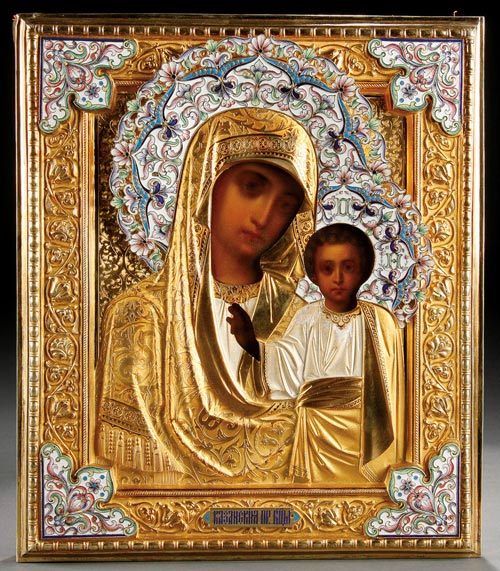 This image of the Kazan Mother of God is one of many Russian icons available on the first day at Jackson’s auction. Image courtesy Jackson’s International Auctioneers.

Marvin Cone’s landscape depicts the rolling countryside of his native Iowa. The oil on canvas, 15 by 30 inches, has a $60,000-$80,000 estimate. Image courtesy Jackson’s International Auctioneers. 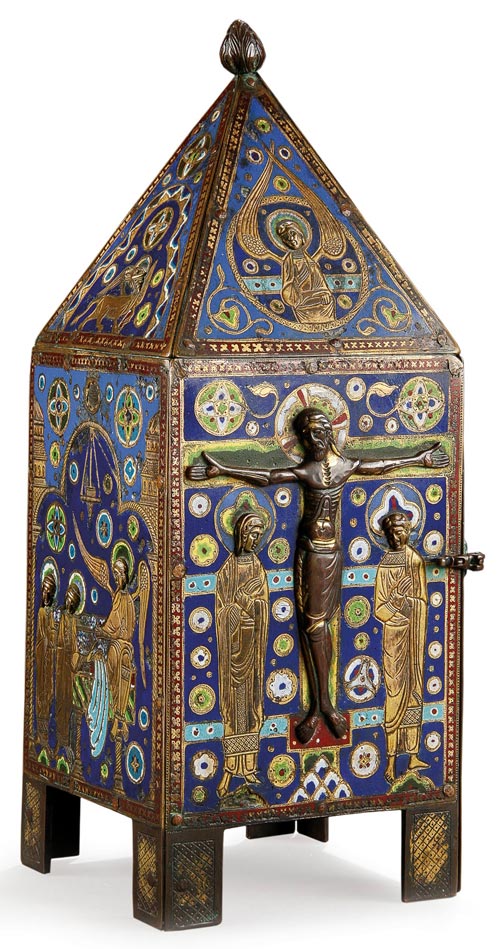 The estimate for this enameled gilt copper tabernacle from the Middle Ages ranges from $40,000 to $70,000. Image courtesy Jackson’s International Auctioneers.