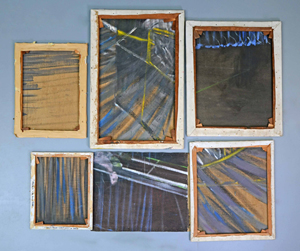 GUILDFORD, England – Canvases cut from “Screaming Pope” paintings by Francis Bacon have emerged and will be sold on March 21 by the Surrey auctioneer who sold other but unidentified fragments of Bacon works for more than £1 million. LiveAuctioneers.com will provide Internet live bidding.

Five canvases, all of which have been authenticated by the Francis Bacon Authentication Committee, will be sold by Surrey fine art auctioneers Ewbank’s on Thursday, March 21. They are estimated conservatively to fetch around £100,000. A sixth canvas from the same source as the others, having recently returned from America so not examined by the committee, is estimated at £5,000-10,000.

All six canvases originated from the studio of Lewis Todd from Cambridge, who as an aspiring painter, had cut them up and used them for his own paintings, which he later sold to visitors and collectors on the All Saints Craft Market and art exhibitions.

Francis Bacon (1909-1992) is known to have painted mainly on the unprimed reverse of canvases and was a ruthless critic and editor of his own work. Anything he was not satisfied with or thought too perfect he mutilated.

Lewis Todd, who died in 2006 aged 81, was well known as a caricature artist for the Cambridge Daily News, now the Cambridge Evening News. After World War II and short of funds, he was encouraged to take up painting in oils by John Kesterton, manager of the Heffer Gallery who gave him his first canvases free because they had only been used on the reverse by Bacon, whom the gallery also supplied with materials, and perfectly suitable for painting on the front side,

The gifts were conditional upon Todd agreeing to cut up the canvases before making use of them for himself. It is not known how Bacon’s used canvases came to be at the Heffer Gallery in the first place.

Said auctioneer Chris Ewbank: “Todd did as he was required and cut the canvases so he could practice on them. At the time Bacon was making his name and his significance as a one of the world’s most outstanding contemporary artists had yet to be widely recognized. It is fantastic to think that these pictures were once part of a much larger painting of historical importance.

Astonishingly, among them and on the reverse of at least one of the original uncut canvases was one of Bacon’s most celebrated and graphic Screaming Pope images. This series of paintings was inspired by Velázquez’s Portrait of Pope Innocent X, and said to be Bacon’s way of expressing the horror of war and its aftermath.

Comparing the fragments to the famous Bacon painting hanging in the Des Moines Art Center in Iowa – Study after Velázquez’s Portrait of Pope Innocent X – the similarities are self-evident. Last November, Francis Bacon’s Untitled (Pope) 1954, depicting a shrieking pontiff, sold in a New York auction for a record £18.7 million.

Chris Ewbank added: “The discovery of these fragments of Bacon-painted canvases represent an important moment in art history. It was no secret that Lewis Todd once used discarded canvases from Francis Bacon’s studio, it was even mentioned in Todd’s obituaries, but to have identified authenticated Bacon pieces which feature one of Bacon’s haunting pope portraits is incredible.

“It also leads to the intriguing speculation that there are more examples of Bacon’s paintings in existence used by Todd for his own purposes, while someone, somewhere might even have a painting by Todd with a pope’s head on the back of it. Anyone who owns a painting by Todd should take it off the wall and check the back of the canvas. Those seemingly random daubs of paint could indicate a work of far greater significance.”

Most valuable of the six oils shows the yellow, white and black edge and leg of a chair, and some of the white papal clothing, on a black and blue ground. It measures 36 by 24 inches, with an additional 3 by 4 inches obscured where the canvas is wrapped and nailed to stretchers. The “right” side shows a still life painted by Todd in 1958, and is signed and inscribed verso, “The Studio at Orchard Avenue.” It is estimated at £25,000-30,000, as is another showing what appears to be the fleshy hand and arm of a Bacon pope. Also visible is the white and green arm of the chair on a black and blue ground. The painting measures 21 by 26 inches and has been removed from its stretchers. On the front is a painting of a house and tree by Lewis Todd.

Estimated at £15,000-25,000 is a canvas measuring 34.5 by 30 inches overall. It shows a set of curtain rings on a black background with three lines of a cube. The use of black as a background and apparent cube structures around figures was frequently employed by Bacon. Similar rings appear in Untitled (Pope) illustrated in Francis Bacon The violence of the real by Armin Zweite plate 10 page 116. Lewis Todd’s painting on the front shows a boy reading a book.

Two other canvases are each estimated at £10,000-20,000. One shows a typical yellow and white edge of a chair from a pope portrait, on a striped purple, black, and blue ground. Bearing similarities to Bacon’s Study after Velázquez’s Portrait of Pope Innocent X (1953), it measures 29 by 24 1/2 inches overall and bears Todd’s portrait of a man wearing a hat on the front.

The other shows typical vertical black stripes in a style used frequently by Bacon as the background for his 1953-54 pope portraits. Written in pencil by Todd is the title of one of his paintings and the words “A Francis Bacon Screaming Pope” inscribed verso. It measures 27 by 21 inches overall and is painted with a still life by Todd.

This and the other four authenticated pieces were included in a PhD research project at Northumbria University sponsored by the Bacon Trust. As part of the research, paint samples from the paintings were collected and analyzed. Preliminary results confirm that all pigments and binding medium used were typical of Francis Bacon works of the 1950s and 1960s.

The sixth canvas from the same source as the others, only recently returned from America and not examined by the Authentication Committee, has deep blue and black vertical lines and is inscribed verso in pen “Apples – by Lewis Todd” and “Francis Bacon – cast off! in 1950’s.” The canvas measures 22 by 18 1/2 inches and is estimated a £5,000-10,000.

Lewis Todd (1925-2006) lived in Over, near Cambridge. He was educated at the Perse School in Cambridge and served in the Home Guard based in Histon. After the war he worked as a graphic artist for the Ministry of Agriculture, Fisheries and Food (MAF) eastern region, and was awarded the British Empire Medal for his work.

He retired in the 1980s, becoming a “Sunday painter,” describing himself as a “late Impressionist,” while his style was likened to that of L.S. Lowry. He and his wife ran a stall at Cambridge’s craft markets for many years.

One of his oil paintings, a scene of people punting on the River Cam behind Kings College Chapel, was purchased on behalf of the Queen Mother and believed to be in the Royal collection, while Prince Charles and Prince Philip were said to enjoy his cartoons done at the East of England Show MAF tent.

Ewbank’s is Surrey’s leading auctioneers of fine art and antiques. They are credited in having established the market for previously unseen and mutilated Francis Bacon canvases. In 2007, they sold a collection rescued from a skip outside the artist’s London studio by electrician Mac Robertson who became Bacon’s drinking partner. Estimated at around £50,000, the collection sold for £1.13 million.

Next came a further six works which were sold by Ewbank’s on behalf of Ron Thomas, a porter at Bacon’s dealers, Marlborough Fine Art. One of Thomas’ duties was to ferry paintings between the gallery and Bacon’s studio and the mutilated canvases were given to him, either to keep or to have the stretchers for his own use. They sold for a total of £32,000.

In 2008, a man who worked in the shop where Bacon purchased his art materials consigned part of one of Bacon’s destroyed canvases dating from about 1985, which showed what appeared to be a “pool of flesh” spread across a black background. It sold for £12,000. 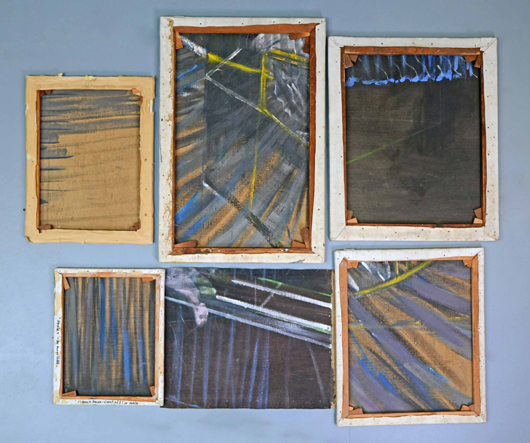 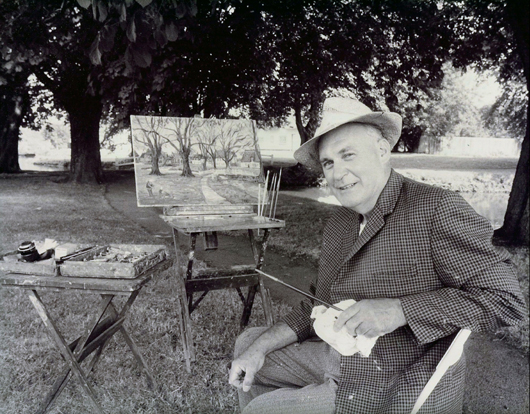 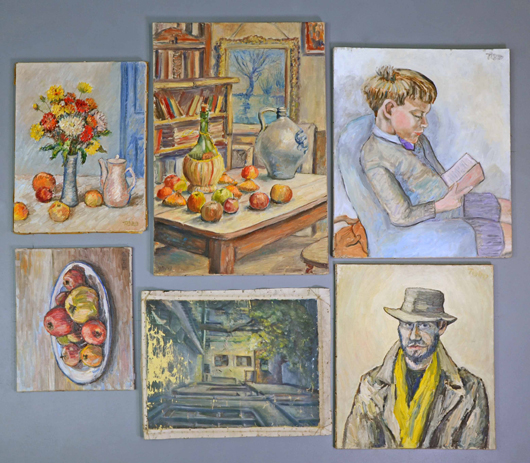