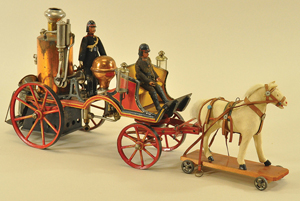 VINELAND, N.J. – From the Fort Knox-style basement of a New York townhouse to the gleaming showcase shelves of a fine country home, a diverse parade of toys has come to Bertoia’s gallery for a Nov. 12-14 auction titled “Toys for the Mantle.” LiveAuctioneers.com will provide the Internet live bidding.

“There’s an abundance of quality, and the mix is just fantastic,” said Bertoia Auctions associate Rich Bertoia. “Every residence and every collection we visited in picking up consignments for this sale was different in a very exciting way.”

The categories represented in the sale’s inventory of 2,000+ toys are: cast-iron, American and European tin, including a selection of Lehmann wind-ups; comic character, European autos and boats, Japanese tin cars, banks, doorstops, pressed steel and battery ops. More than 500 top-quality Christmas, Halloween and other holiday antiques will take the spotlight in the Sunday, Nov. 14 session.

Friday’s lineup includes a host of banks, with cast-iron “still” models headed by an Eiffel Tower, Two-Faced Devil, Town Hall, Hen on Nest and a hard-to-find Sundial. Among the still banks is a private collection examples replicating safes. “Many of these safe banks are very rare and will be the first of their type to see the auction market,” Rich said.

Antique cast-iron mechanical banks came from several excellent collections. Among them are two Jonah & the Whale banks, a couple of Chief Big Moon banks, plus a Darktown Battery, Professor Pug Frog, Stump Speaker and many others.

A well-rounded caravan of European automotive toys includes touring cars, a few luxury limos and an imposing array of fire toys. A star lot is a blue Bing steam-driven Spyder described by Rich as “fabulous – the best of its type I’ve ever seen.”

One of the most varied selections of Marklin toys to be auctioned in recent years includes a fire pumper, a hose-reel fire vehicle, a horse-drawn vegetable wagon with a few of its original produce crates, and the category’s star attractions: two fabulous, all-original Marklin boats with provenance from the collection of Bertoia Auctions co-founder the late Bill Bertoia. One of the rare and coveted boats is the 20-inch Priscilla; the other is a 30-inch ocean liner. “Those boats were in Bill’s collection for many years,” Rich noted. Among the other European nautical toys in the auction are approximately 20 boats from manufacturers such as Bing, Fleischmann and Carette.

The Marklin procession continues with a number of premier train lots. A 5-car brewery set includes among its decorative accents a Rochester Brewing Co. logo on one of the cars, while two very rare summer coaches replicating summer trolley coaches on tracks feature die-cut opened “curtains.”

Another unusual Marklin train has a peripheral military connection and consists of a wind-cutter locomotive and five flatcars that haul airplanes with fold-down wings. Other Marklin train lots include wonderfully detailed train sets, a fruit boxcar, and two screen-design glass-canopy train stations.

Over 100 pieces of cast-iron automotive will be offered, with most of the toys coming from a single collection. A special highlight is the ritzy Packard Straight 8, one of a number of toys to be offered from the collection of the late Bob Turnquist.

American toys will be in abundance, with one of the headliners being a very rare Secor Banjo Player with unusual, original blond hair. A colorful array of Schoenhuts will cross the auction block, including Humpty Dumpty circus figures and a rare 8-figure band of musicians with instruments. The set was created to accompany Schoenhut’s extremely rare and expensive bandwagon.

The comic character section includes a number of Disney and other character toys, including a Distler Mickey and Minnie Hurdy Gurdy, Mickey Mouse “waddler” and Mickey on Rocking Horse; and a Donald Duck on Rocking Horse.

A very scarce 1920s Dollyville set – a small village of paper litho on cardboard buildings – was formerly in the collection of the Washington Doll’s House & Toy Museum. The set forms a compatible neighborhood with the sale’s paper-on-wood Bliss homes and a small flotilla of Bliss and Reed ships. Joining them is an exceptional paper litho on wood version of The Monitor and an 1890s paper litho on wood Brooklyn Bridge (possibly by Reed), complete with a powerhouse.

More than 500 holiday lots will be auctioned on day three. Highlights include two Santa trade stimulators – one of them 45 inches tall; the other, 41 inches tall – and an exquisite 34-inch-tall chalk figure. Another showstopper is the 40-inch display that depicts Santa emerging from a chimney. The Christmas treasure chest also includes more than 75 glass ornaments and 50+ Dresden ornaments.

Halloween antiques from the renowned Claire Lavin collection will add to the session’s festive atmosphere, with glass candle lanterns, jack-o-lanterns, advertising pieces and other novelties on the auction agenda. The day will conclude with uncataloged holiday box lots available only to those who attend the sale in person.

Jeanne Bertoia, owner of Bertoia Auctions, said she is very pleased that the November sale has already generated so much interest. “Buyers are feeling more confident, and collectors who’ve taken a cautious approach to consigning their own collections now realize that the antique toy market is not the part of the economy that needs a stimulus package to help it along. Toy collectors are a very intelligent group of people. They recognize how rare and beautiful these toys are, and when the opportunity arises to buy, they don’t hesitate.”

For additional information on any lot in the sale, call Bertoia’s at 1-856-692-1881 or e-mail Toys@BertoiaAuctions.com. View the fully illustrated catalog and sign up to bid absentee or live via the Internet through www.LiveAuctioneers.com. 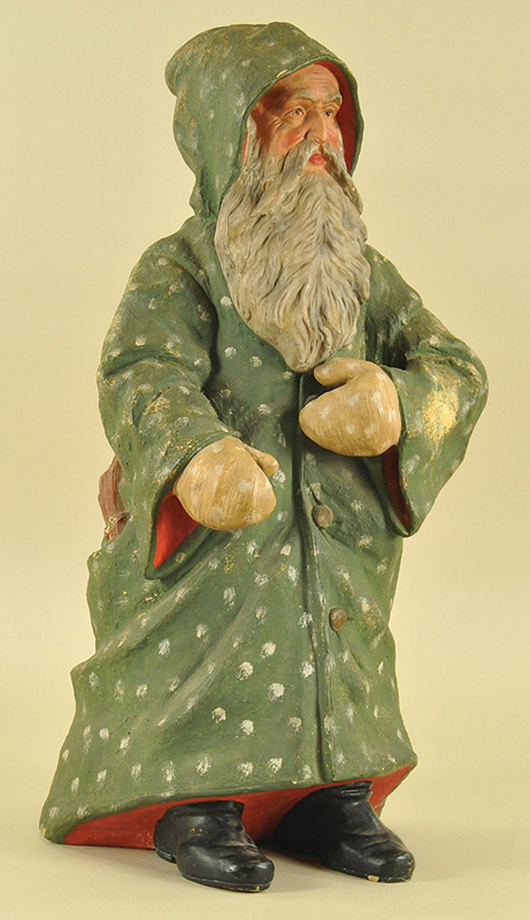 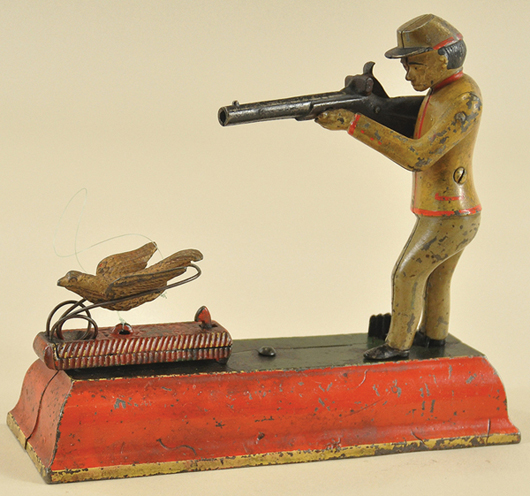 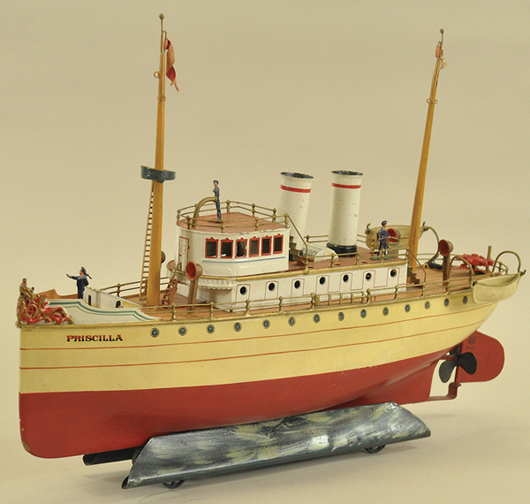 Leading the fleet of more than 20 antique boats from premier German manufacturers is an exquisite circa-1909 hand-painted Marklin “Priscilla” steamboat, 19 inches long, with provenance from the collection of the late Bill Bertoia. Estimate $35,000-$45,000. Bertoia Auctions image. 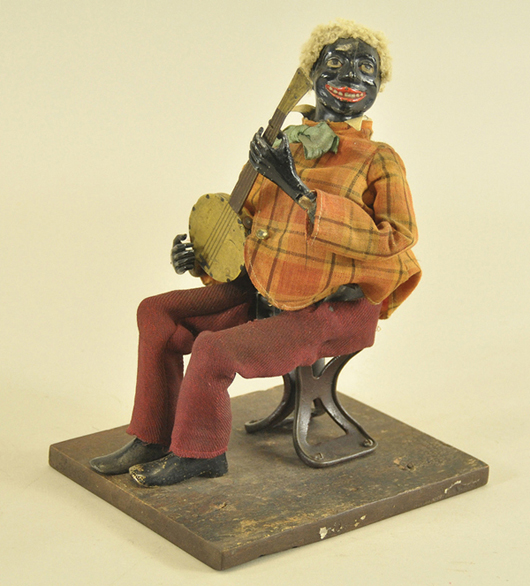 Made around 1870 this 11-inch Secor Banjo Player is constructed of cast iron and lead, and retains its original blond hair and fabric clothing. Estimate $22,500-$27,500. Bertoia Auctions image. 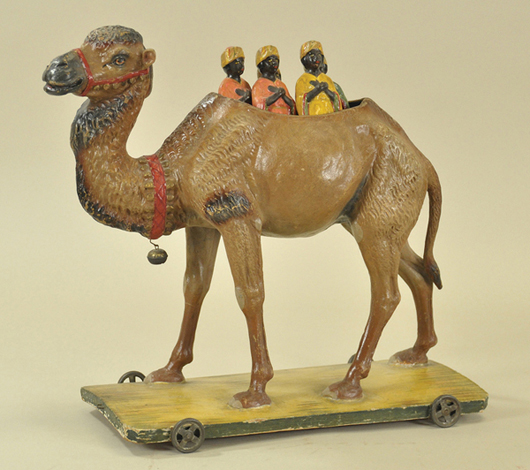 This skittles set consists of a camel on a wheeled platform, with Nubians skittle figures. It measures 15½ inches long by 14¾ inches tall and could bring $5,000-$7,000. Bertoia Auctions image.

Possibly made by Reed, this exceedingly rare paper-on-wood Brooklyn Bridge with powerhouse, 48 inches long, has a hand crank that activates a rope-pull system to move two cars from end to end. Estimate $5,000-$6,500. Bertoia Auctions image. 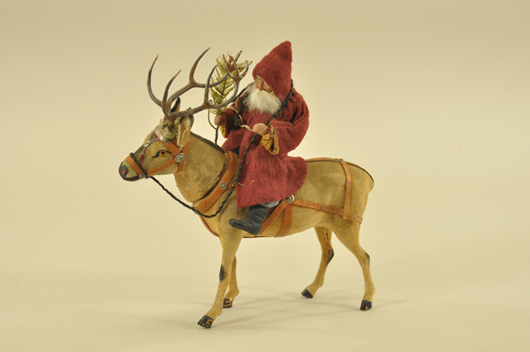 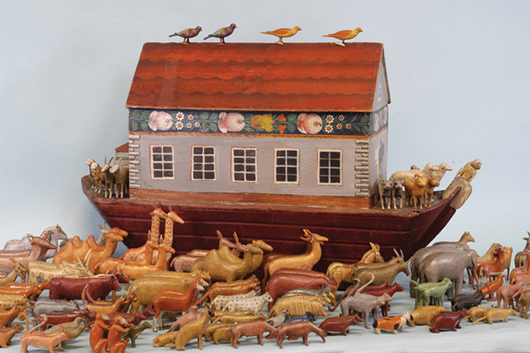