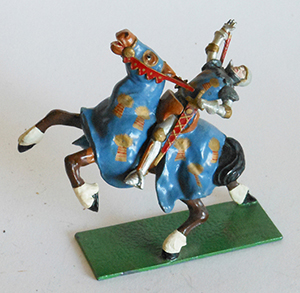 PITTSBURGH – The renowned Dr. Arthur Puglisi collection will serve as the centerpiece of Old Toy Soldier Auctions’ big Nov. 16-18 sale of antique, vintage and contemporary soldiers and figures. In addition to the Puglisi collection, OTSA will offer other important properties during the 1,500-lot specialty event with bidding methods including absentee, by phone or live via the Internet through LiveAuctioneers.com.

The Friday session, which will start at 3 p.m., is devoted to contemporary toy soldiers whose production dateline begins in 1972. There are many examples of popular King & Country figures, as well as soldiers from Nostalgia, Ducal and Lucotte, a French brand that was actually founded in 1785.

“Pre-World War I Lucotte soldiers are very rare, very desirable and very pricey,” said OTSA owner Ray Haradin. “A century later, in the 1990s, Lucotte starting producing figures that were of a higher quality than what many of their competitors were manufacturing. Their range was even more expensive than Mignot’s contemporary line. Where a 1990s set from Mignot typically might have been priced around $200, a Lucotte set would have sold for $300 to $500. Many collectors look for Lucotte soldiers from this era, and we have quite a few in the sale.”

Around 50 sets by Washington, DC master painter and modeler Neil Rhodes will be offered. The sets were created at the behest of a famous Britains collector in Cleveland named William J. Miele, who is actually the consignor.

“Mr. Miele had the largest collection of Britains ever assembled. He sold it in the 1990s,” Haradin explained. “At that time, he commissioned Neil Rhodes to make sets that looked like Britains and titled them ‘sets that Britains should have made.’” Among the sets to be auctioned is a custom-painted Boer War RFA oxen-drawn 4.7 Naval Gun Team with crew, officer and handlers. It is expected to realize $500-$700.

The Saturday and Sunday sessions will be devoted primarily to the Dr. Arthur Puglisi collection, which Haradin described as “heavy on Britains, from the earliest of ‘first versions’ through to the postwar period. Dr. Puglisi has always been a completist who wanted an example of everything.” The collection comprises approximately 540 sets, half of which retain their original boxes.

The collection is rich with highlights, including an extremely rare Britains Set 316 Royal Horse Artillery at the Halt, with original boxes. The set is estimated at $2,500-$3,500.

A very nice array of Courtenay figures will be auctioned, as well as some Lou Steinberg dime store conversion figures. Steinberg figures have done exceptionally well in OTSA’s past events, with one particular figure exceeding $1,000 in the company’s June sale.

Several Timpo sets are in the auction lineup. A highlight is the circa-1955 “Quentin Durward” set, near mint with figures still tied in place in their original box. The set is based on the film version of Sir Walter Scott’s “The Adventures of Quentin Durward,” about the exploits of an honorable but penniless 15th-century Scottish knight.

Additionally, the weekend sessions will include an excellent sampling of Stadden figures – including Super Staddens painted by Charles Stadden himself – some quality Rose figures, and numerous civilian figures by various manufacturers.

There will be many German-made Heyde figures in the auction, including a number of military sets. A Heyde Zoo – with giraffe cage, cat and bear enclosures; and several outbuildings – will go under the hammer on Saturday. 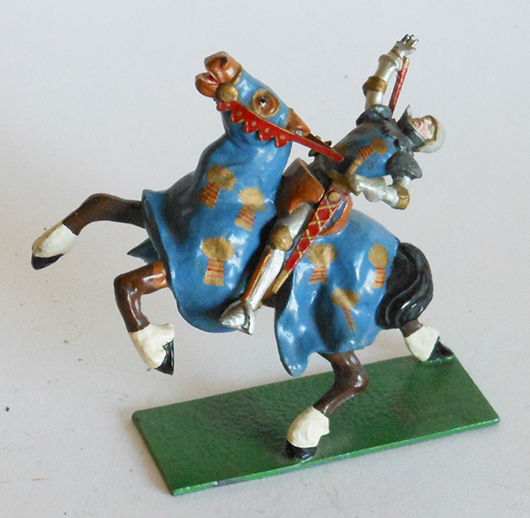 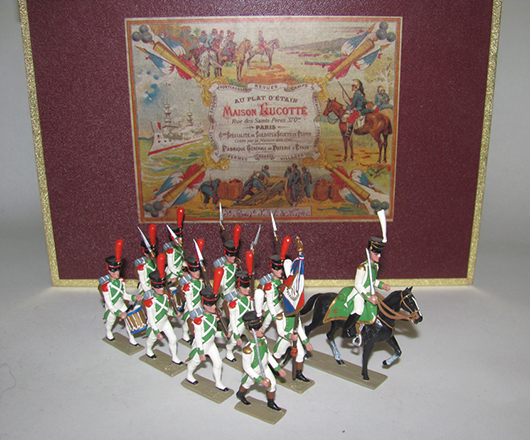 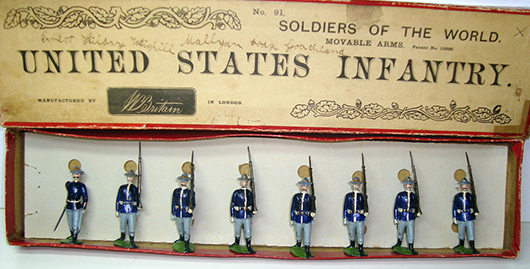 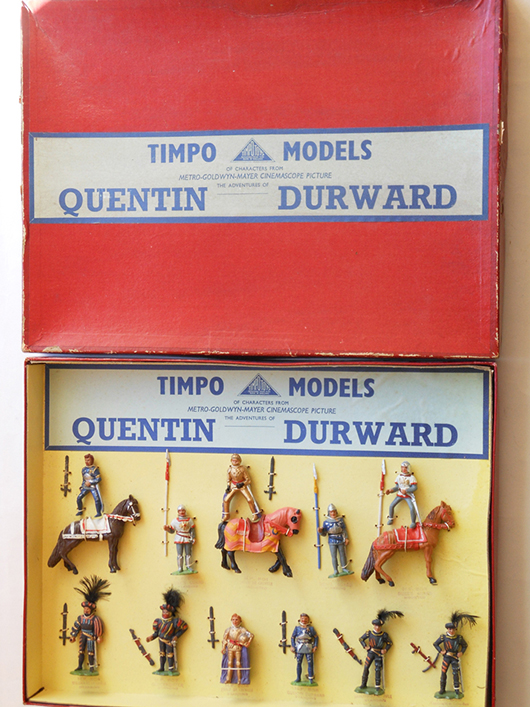