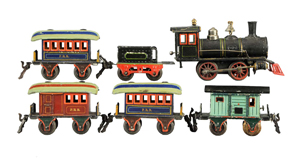 DENVER, Pa. – A remarkable cross-category collection of vintage toy airplanes, three outstanding train collections and more than 400 lots of dolls and accessories will join a widely varied array of other fine toys to form the core of Morphy’s May 11-12 auction. LiveAuctioneers.com will provide the Internet live bidding.

The Friday session starts with a major offering of antique and vintage trains that comprises a good 40% of the 1,615-lot sale. “Every train collector will find something that pleases them,” said Dan Morphy, CEO of Morphy Auctions. “There are hundreds of prewar, postwar and contemporary trains of many different gauges.”

Within the German train group are coveted early Marklin O gauge sets, a handsome Bing 1 gauge set, and half a dozen mostly hand-painted buildings and stations, including a Leipzig station. “Golden age” highlights include an American Flyer President’s Special with original box and a Lionel #400 freight set with some of its original individual boxes.

Most of the early Marklin trains are from the Arizona collection of Ray Dextraze, while many of the Lionel and golden age trains came from New York-based collector Jack Moore. A Pennsylvania collector consigned the contemporary trains.

The stellar Geoffrey “GR” Webster collection is a comprehensive lifetime assemblage of American cast-iron, English die-cast, and pre- and postwar European and Japanese airplanes. More than 50 prized pieces – many of them reference book examples – will go under the hammer during the two-day sale.

Webster is not only a collector but also a highly decorated wartime pilot, aviation scholar and author who built his panoramic collection with an eye toward rarity, originality and historical accuracy. His fascination for flight – which began during childhood as the son of a naval pilot – led to his amassing a world-class collection of aviation toys and models. Portions of the collection are documented in his 2009 book Collecting Vintage Aircraft Toys and a 2011 co-authored edition titled Dinky Toys Aircraft 1934-1979.

The top prize in Webster collection is an ultra-rare 1930s Britains Short Bros. Monoplane Flying Boat with original box. One of only three known to exist, the Bakelite and heavy tin plane is also the only example to be offered for public sale in the last 30 years.

“James Opie, who authored the premier guide on Britains soldiers, rates this toy at the top of rarity for Britains,” said Morphy. “GR’s book example might even reach $20,000.”

A fleet of iconic 1920s cast-iron aviation toys is led by a Hubley America, the largest cast-iron plane ever made. There’s also a massive Hubley Friendship float plane with Amelia Earhart’s silhouette in one window; a Spirit of St. Louis, and numerous other period cast-iron tri-motors and gliders.

Prewar German tin planes include Tippco productions from 1935 to 1942, including a Junkers JU-52, a Siebel twin-engine transport, and the only known surviving example of a Heinkel He-100. There are also rare prewar Rico (Spanish) and Ingap (Italian) craft, including the only known original examples of the CR-42 biplane fighter and the Macchi C.202; and a seldom-seen Chein tinplate Martin seaplane. Arguably the largest tin toy ever produced, a Yonezawa tinplate 10-engine B-36 bomber had plenty of room to spread its expansive wings in the Webster collection. Two boxed prewar Dux constructor planes depict a German Stuka divebomber and civilian Messerschmidt ME109.

“Usually toy plane collectors focus on one category, for instance American cast-iron or British planes. There aren’t many who collect all toy planes, but GR was one of them. His collection is an overview of aviation history in toy form,” Morphy said.

Early German toys include a 1st series Marklin battleship New York, Fleishmann and Carette boats; and many tin autos by such makers as Bing and Fisher. A hand-painted late-19th-century Marklin firewagon, Lutz hansom cab, 30 lots of penny toys and a rare Uberlacher swimming toy set with original toy boats and tin animals round out the selection.

The Saturday session is led by cast-iron still and mechanical banks, including an Uncle Remus, and Hen on Nest; as well as vehicles and airplanes from the Webster collection. An Ives Phoenix horse-drawn fire-ladder toy is another cast-iron highlight.

More than 400 lots of fine dolls, doll clothing, accessories, furniture and wardrobe trunks represent a 200+ year timeline, ranging from 18th-century Queen Anne wood dolls to modern artist dolls. One of the finest dolls in the sale is a 1910 Kammer & Reinhardt 101X – a rare boy character doll with composition body, bisque head and flocked hair. In beautiful condition, it is expected to make $5,000-$6,000. 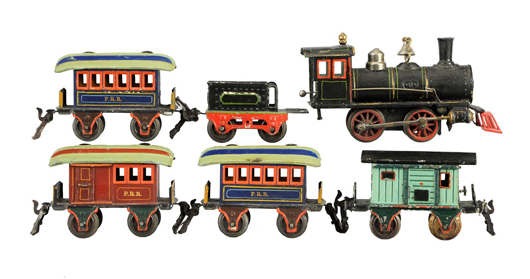 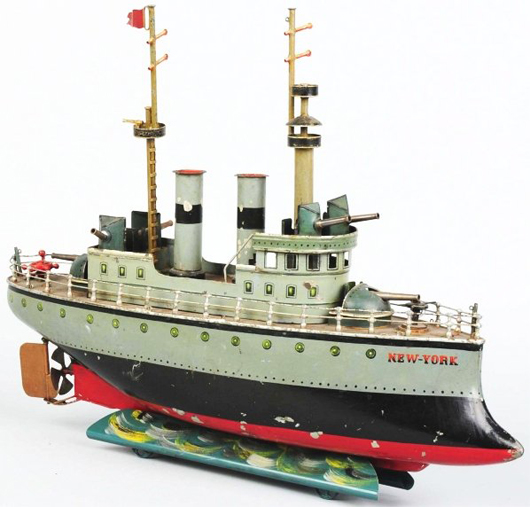 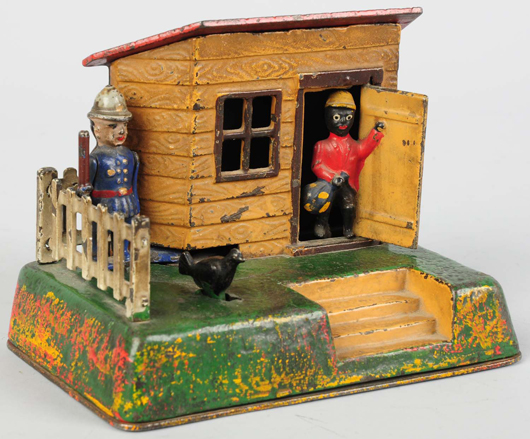 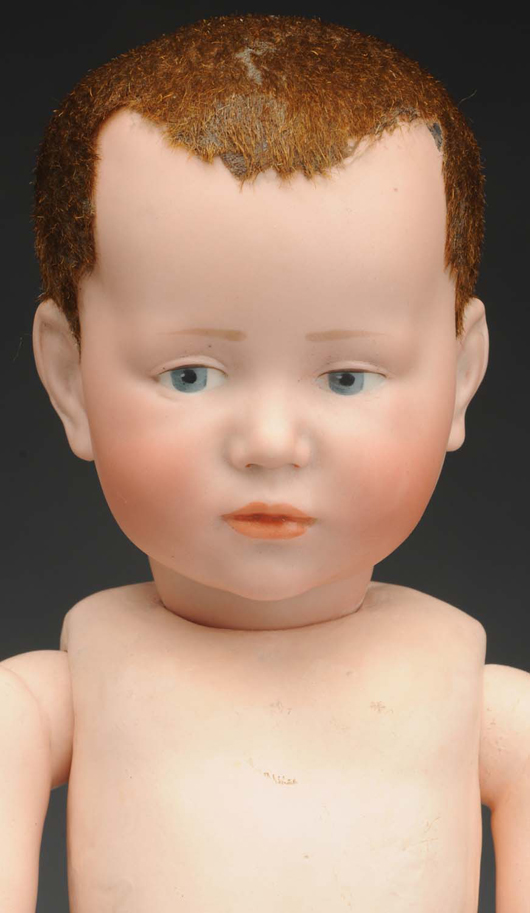 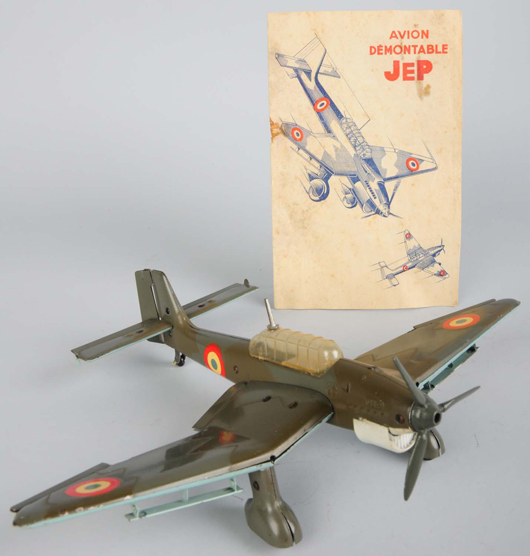 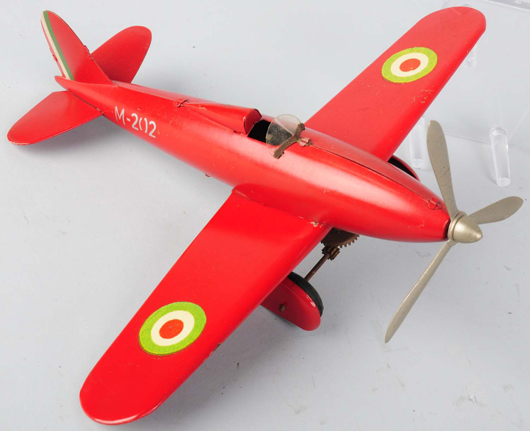 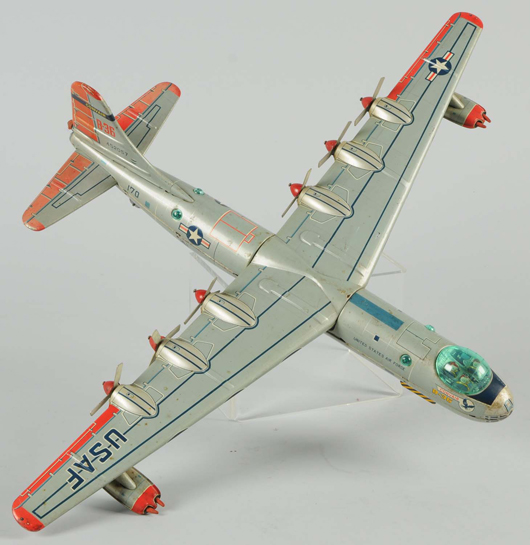