NEW ORLEANS – Over 1,200 lots of quality merchandise in a wide array of categories will cross the block on May 12-13 at Crescent City Auction Gallery, in just the second auction at the firm’s new showroom facility located at 1330 St. Charles Avenue in New Orleans. The May auction will begin both days at 10 a.m. (CST), with Internet live bidding through LiveAuctioneers.com.

Offered will be fine art (to include Part 2 of the collection of Dr. James W. Nelson of Gonzalez, La., who specialized in Louisiana and New Orleans artworks; Part 1 was held in March), silver, estate jewelry, period furniture, Persian rugs, chandeliers and lighting, antique clocks (case and regular) and more.

Also sold will be the estate of a dealer/collector from Hattiesburg, Miss., featuring a huge collection of bric-a-brac. “The more than 150 pieces of high-end bric-a-brac in this dealer’s private collection are sure to attract bidder attention, especially online,” predicted Adam Lambert of Crescent City Auction Gallery. “It’s a wonderful selection — very eclectic and highly desirable to collectors.”

Artworks will be a major component of the auction. One lot expected to garner interest is a signed oil on board by the African-American folk artist Clementine Hunter (La., 1886-1988). The work, titled Saturday Night at the Honky Tonk (circa 1966) was purchased by the current owner’s grandmother from Ms. Hunter at Melrose Plantation in Louisiana circa 1966.

Another noteworthy lot is a pair of monumental arched oils on canvas by Victor Mazier (French), done in 1864 and titled Praying to the Virgin Mary and Priests in Prayer. The latter is signed, dated and marked (Paris). Both paintings are unframed, but they certainly are impressive, at 128 ¼ inches by 58 ¼ inches. “These are large, beautiful works, sure to draw attention,” Lambert said.

Two other artworks bound to do well are a signed 19th century oil on canvas by Wesley Webber (Mass./Calif., 1841-1914), titled Sheep at Pasture, nicely presented in a gilt and gesso frame (11 inches by 14 inches); and a 20th century oil on canvas signed lower right by the late Hungarian artist Maria Szantho (1897-1988), titled Reclining Nude, 24 inches by 32 inches wide.

An expected star of the clocks category is a 19th century carved mahogany tall case clock with the brass and steel dial labeled Thomas Armstrong & Brother, Manchester (88 inches tall). The clock would pair well with the featured fine antique Persian Kashan rug, 10 feet 2 inches by 14 feet, as would the 20th century Chickering ebonized baby grand piano with six Ampico paper rolls they are offering in this auction.

Silver pieces will include a fine Tiffany sterling Art Nouveau center bowl weighing 28.45 troy ounces (circa 1906); and a 97-piece set of sterling flatware by Gorham in the Willow pattern, weighing 97.7 troy ounces (circa 1954). Estate jewelry will feature three ladies’ stainless Rolex wristwatches (two with gold, all mounted with diamonds) and a selection of diamonds, sapphires, emeralds, rubies and pearls.

Returning to artwork, the sale will feature a pair of works by Robert Rucker (La., 1932-2001). One is a 1970 watercolor titled The Shed by the Horse Barn, signed and dated lower right and measuring 14 ¼ inches by 21 ¼ inches. The other is a 20th century oil on board titled Window on the Garden, signed lower right and diminutive at 9 ½ inches tall by 7 ½ inches wide. Fans of triptychs will be intrigued by the three oil on canvases all housed in a single frame by Emile Roy, titled Miracle de sa Charite, St. Elizabeth de Hongrie: son Castel and La Supreme Sacrifice. All three are signed. Also sold will be a bronze work by Antonio Frilli (It., 1860-1920), titled Seated Classical Warrior, signed on the base (21 ½ inches by 9 ¼ inches).

Other artworks deserving mention are a 1997 oil on canvas by Hunt Slonem (La., b. 1951), titled Two Birds, signed and dated en verso (37 inches by 37 inches); an oil on canvas by Florine Hyer (Calif., 1868-1936), titled Still Life of Flowers in a Basket, signed lower right; and a 19th century KPM porcelain plaque of a draped classical nude beauty, reading in a landscape.

For additional information on any lot in the sale, call 504-529-5057 or e-mail info@crescentcityauctiongallery.com. 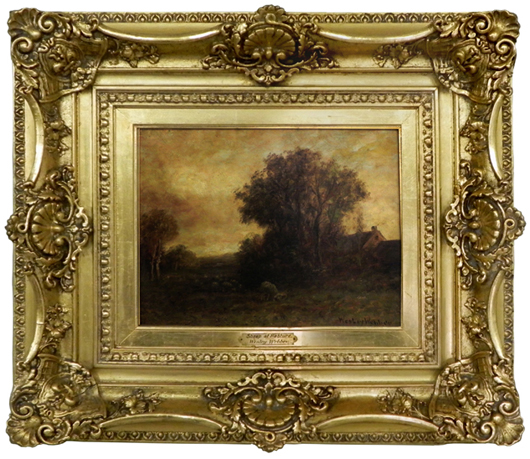 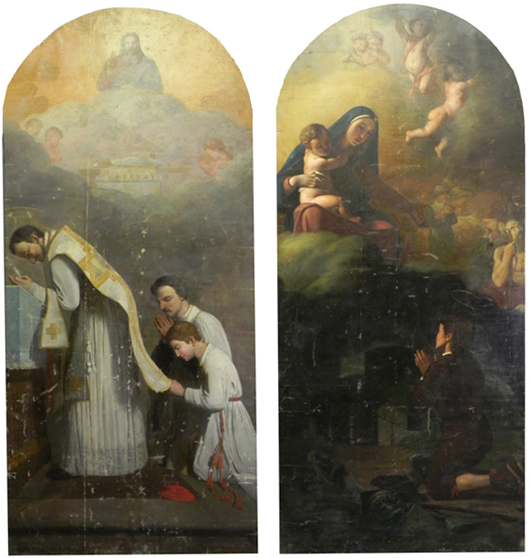 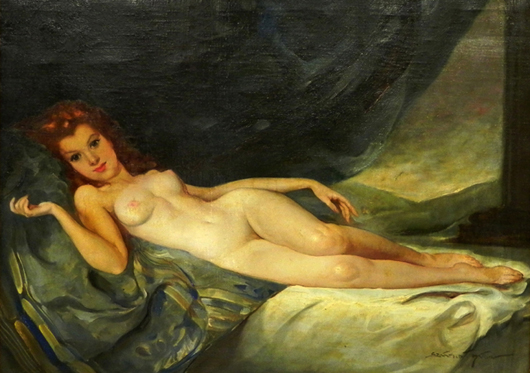 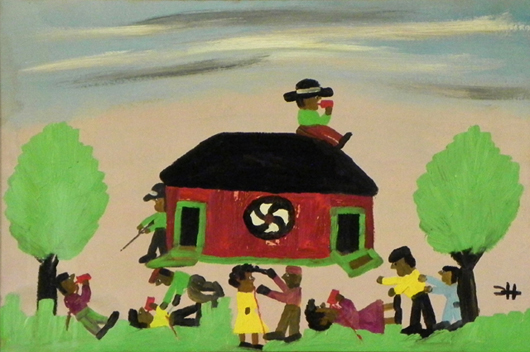