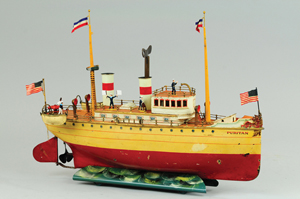 VINELAND, N.J. – There’s a Grand Tour planned for Nov. 11-12, but no passports are required. This particular excursion will bring together from points afar 1,400 lots of rare and beautiful European and American toys, all to be auctioned at Bertoia’s comfortable and spacious New Jersey gallery. LiveAuctioneers.com will provide the Internet live bidding.

“Much of the early American tin came from the late Ralph Tomlinson’s collection, and the cast-iron toys came from another advanced West Coast collector. There are so many highlights. Everything in this sale is extra nice,” said Bertoia’s associate Rich Bertoia.

The cast-iron vehicles to be offered run the automotive gamut from cars and busses to motorcycles and farm toys. “This collector sought both quantity and condition,” said Bertoia. “Some examples are rated ‘pristine,’ and a few come with Larry Sieber provenance, like the Hubley Panama Digger toy.” The collection also includes a few Vindex sample autos formerly in the Donald Kaufman collection.

One of the top cast-iron pieces is a very rare Arcade panel truck advertising Jewel Coffees on both sides. Finished in deep brown with tan, the truck has ribbed white tires not commonly seen on Arcade vehicles. Rich Bertoia believes the toy is one of a kind. “No one has ever seen this truck before,” he said.

A fresh to the market collection of European penny toys will make a timely appearance, as will an estate collection of 100 figural British and Continental biscuit tins. Among the top tins are a racecar, a Crawford’s gold bi-plane, Huntley & Palmers trucks and two segments of Peek Frean’s castle.

Many Lehmann and Martin clockwork toys await the auction spotlight, together with European merry-go-rounds, a Doll et Cie. Ferris wheel, and a host of European limousines and cars by premier makers. An early Marklin water tank auto and a Bing fire hand pumper are worthy of special mention.

A fleet of handsome German-made ships and boats will be dropping anchor at Bertoia’s. Marklin rarities lead the way and include a Puritan oceanliner, Philadelphia battleship and several gunboats.

One hundred cast-iron mechanical banks will cross the auction block, among them an Acrobat, Boy Scout Camp, Butting Buffalo and boxed Calamity.

The auction will feature another fine assortment of American comic character toys from the Ron and Sandy Rosen collection. More than 100 popular TV stars and Marx characters will be available, and as is the case with all of the Rosens’ toys, they are in the best condition anyone could ever hope to find.

Rich Bertoia tipped collectors to be watching for a few “surprise entries” in the early American tin section, which is already confirmed to include some George Brown designs, riverboats, and Ives clockwork trains and walking figures.

Bertoia’s has always enjoyed a strong following among collectors of holiday antiques, who regard the company’s annual November sale as a sort of mini convention. This year, Christmas enthusiasts can look forward to a fine array of early German-made goods. “Everything for the 12 days of Christmas can be found in this sale,” said Bertoia. “There are ornaments of every type – glass, spun cotton, more than 50 Dresdens, and some exceedingly rare moon-face ornaments that double as candy containers.” Trade stimulators and belsnickels round out the Christmas section. Easter and Halloween antiques have been added to the sale, as well.

Many lovely European dolls have been cataloged, from manufacturers such as Jumeau, Steiner and Kestner. Among the highlights are a mechanical bisque doll in original wood box, a very rare 17-inch French fashion doll, a 37-inch Tete Jumeau and a scarce 39-inch wide-eyed Steiner. The category also features several automata.

The Barbara and Chuck Cook cast-iron doorstop collection will debut during the Nov. 11-12 auction. Because the Cooks’ collection is so extensive, Bertoia’s will be auctioning it in three parts, with parts II and III to follow in future sales. Many exceptional florals are included, as well as several 1920s/’30s doorstops in the form of historic New England houses, each hand-painted by Sara Symonds. Additionally, the collection includes a large-size Mary, Mary Quite Contrary, a Wine Man, Hubley Grace Drayton designs and several Hubley Fish productions. A menagerie of animal-theme doorstops starts with “feathered” varieties such as a full-figure pheasant, a Turkey, and a large-size Bradley & Hubbard Rooster. The grouping concludes with depictions of various types of dogs. 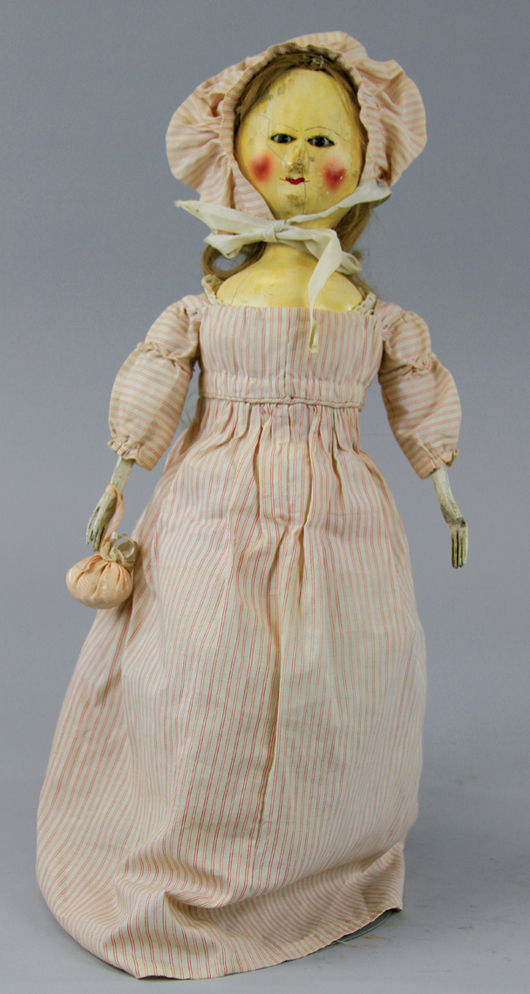 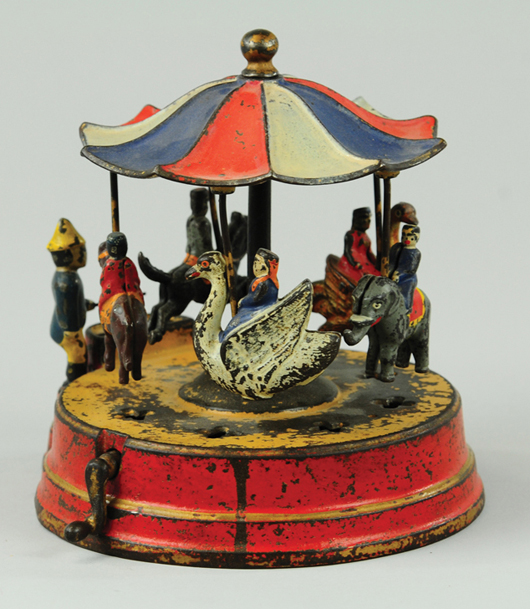 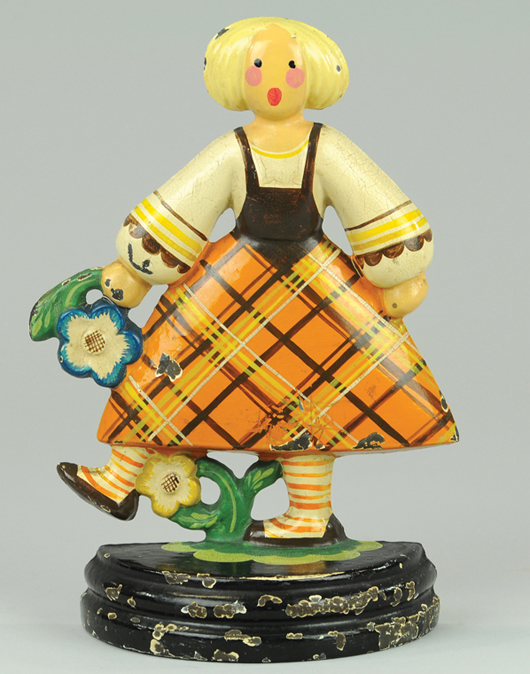 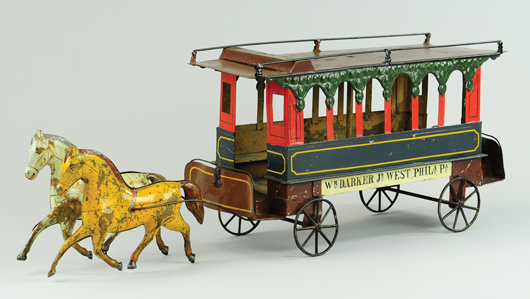 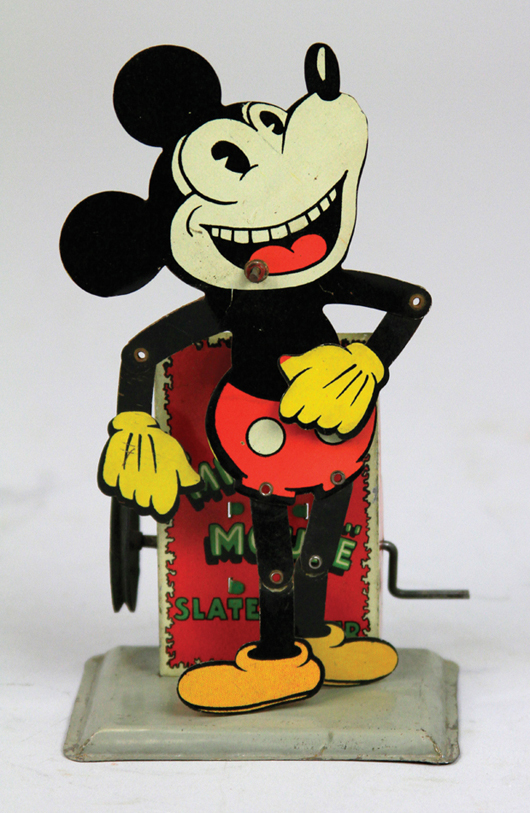 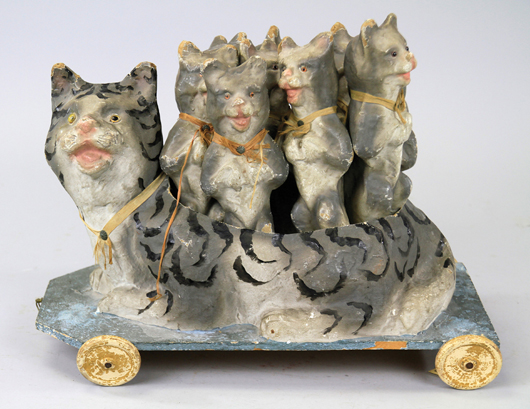