King Bockle, from the Marc Solondz collection to be auctioned Nov. 13-14 by Dan Morphy Auctions.

DENVER, Pa. – Dan Morphy Auctions ventures into the fantasy fringe of Deep Space 9 on Nov. 13-14, with an extraordinary sale of robots, space toys, and Japanese superheroes, die-casts and vinyls. Internet live bidding will be available through www.LiveAuctioneers.com.

The comprehensive sci-fi toy collection of nearly 1,500 toys was consigned by Marc Solondz, a New Jersey-based collector who “flew under the radar for years and made very smart buying choices,” according to Dan Morphy Auctions’ owner and CEO Dan Morphy.

“Although both Marc and his collection later became very well known, he formed the core of his fantastic collection quietly, and made many trips to Japan to purchase superhero toys that were not available to buy in the United States,” said Morphy. “We believe it is the largest single-owner robot, space toy and superhero collection of its type ever to come to auction. It stands apart from any collection we at Morphy’s have ever seen before because it contains so many of the great die-cast pieces made by Bandai offshoot “Popy,” in boxes with Japanese writing that are so desirable to collectors.”

Robot highlights include an X-27 Explorer, Telephone Robot and Mighty 8 – all of which are boxed. Also in the group are a Change Man Robot with lizard head that opens to reveal a man’s head, and a Mr. Atomic. The collection includes Masudaya’s Gang of Four robots: Lavender, Giant Sonic (Train), Radicon and Target.

Tommy Sage Jr., Morphy’s chief operating officer and an expert in postwar Japanese toys, said he believes the superhero category will put in a very strong performance at auction. “It runs the gamut and is about 80 percent boxed,” said Sage. “To list just a few examples, there’s a Golden Bat, Astro Boy, Masked Rider, Barragan, Moonlight Man and Super Kun, plus quite a few Godzillas and Batman toys. There’s also a giant Mirror Man – the mask comes off and there’s a head inside – and a scarce, hand-painted Jetter Car. There are lots of really unusual vehicles in the collection, including airplanes, submarines, speedboats and motorcycles.”

The November auction at Morphy’s will mark a milestone, since it will be the first time a Japanese die-cast and vinyl collection has come to auction. Most of the Japanese die-cast pieces are boxed, and the vinyls are in their original plastic packaging.

“This represents a unique opportunity for collectors, especially those who do not live in Japan. These toys just don’t turn up for sale in the United States,” said Sage. “They have to be bought there and brought back, which is what Marc Solondz did.”

Die-cast toys made by Popy during the company’s golden era (1970s to 2000) are especially desirable to today’s collectors, since Popy was considered the premier brand of its genre. Popy was a trailblazer and even coined the now-mainstream terms “Chogokin,” which means “super alloy metal,” and Popinica, which merges the name “Popy” and the Japanese word meaning “mini-car.”

Alen Yen, one of the specialists who cataloged the die-cast and vinyl toys for Morphy’s, said the Nov. 13-14 sale of the Solondz collection is especially significant because it is “the first time anyone has formally cataloged and priced these types of toys, which finally legitimizes what has been going on for 20 years. There have been private sales in the past, with collectors selling to dealers, or collectors selling to other collectors, including through eBay, but there has never been an entire collection offered at auction.”

Yen noted that Solondz’s massive collection of toys from Popy’s 1970s Chogokin and Popinica series includes several items of extreme rarity – a gold-leg version of Mazinger, a black Reideen, complete series of Ninja Captor and Robocon, and Godaikin deluxe sets, including Combattra, Voltes and Chokinzoku Tetsujin 28. Another prized catch for any collector is a very seldom seen intact example of Takemi Sandaio. Whenever an example of this toy is offered for sale – which is not very often – it almost always exhibits some form of damage.

“There are over a dozen Jumbomachinders, too, for those seeking the 2-foot-tall masterpieces,” Yen said, observing the auction lineup. “These include Getta 2, Dol, Pegas and all of the Shogun Warriors.” Productions from the 1980s are found in the collection, as well, and include Takatoku Valkyries in their pristine original boxes. A headliner within this niche category is a very rare Elintseeker.

There are many highlights among the grouping of vintage vinyls. Some of the top lots include a King Bockle. Karly-seijin, Pegila, Kendorus and Wakuranba, as well as a rare orange and red version of Supersol Kanegon.

The bonus selection of comic character toys to be offered in Morphy’s Nov. 13-14 auction exhibits excellent condition throughout. “Marc’s buying choices were excellent,” said Tommy Sage. “The collection includes a lot of Popeye, Frankenstein and Batman character toys, and all of it is really nice. Collectors will be pleased.”

The buzz in robot and superhero circles is that collectors from Japan and Europe are already lining up to buy airline tickets so they can fly to the United States to attend the auction and other auxiliary events planned by Morphy Auctions.

“This is turning into quite a destination event,” said Morphy. “We love it when collectors use our auctions as a hub for their gatherings and conventions, and that’s what this is turning out to be – an international convention.”

Dan Morphy Auctions’ sale of the Marc Solondz Collection will take place on Friday and Saturday, Nov. 13 and 14. View the fully illustrated catalog and sign up to bid absentee or live via the Internet at www.LiveAuctioneers.com. 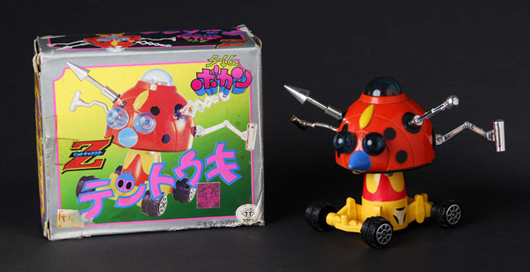 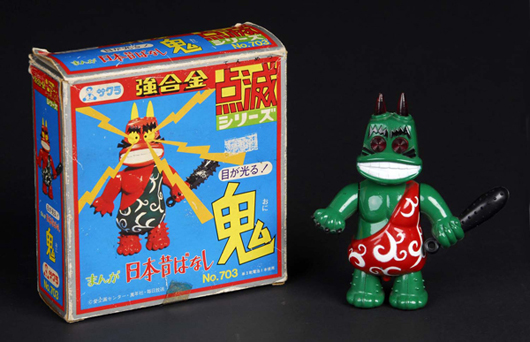 Oni, green version, from the Marc Solondz collection to be auctioned Nov. 13-14 by Dan Morphy Auctions. 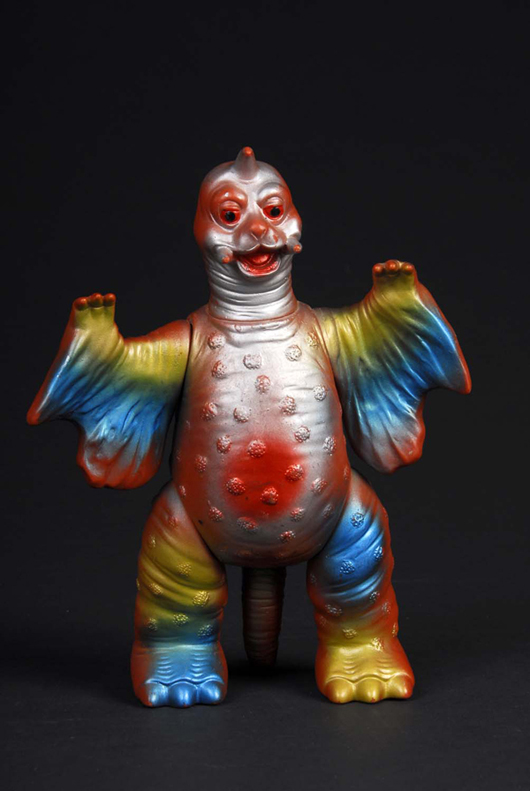 Daiku Maryu DX, from the Marc Solondz collection to be auctioned Nov. 13-14 by Dan Morphy Auctions. 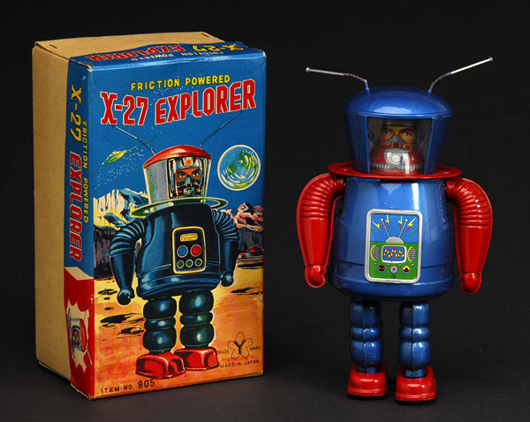 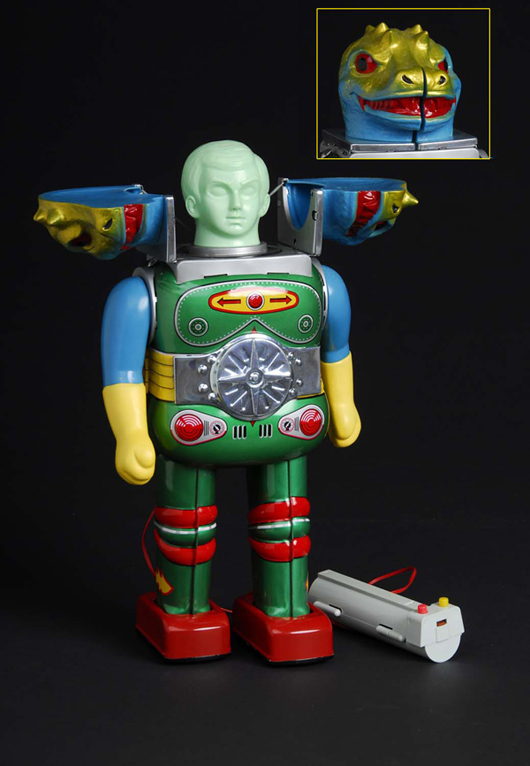 Plastic and tin Change Man robot, from the Marc Solondz collection to be auctioned Nov. 13-14 by Dan Morphy Auctions.

Ambassador Maguma toy, from the Marc Solondz collection to be auctioned Nov. 13-14 by Dan Morphy Auctions. 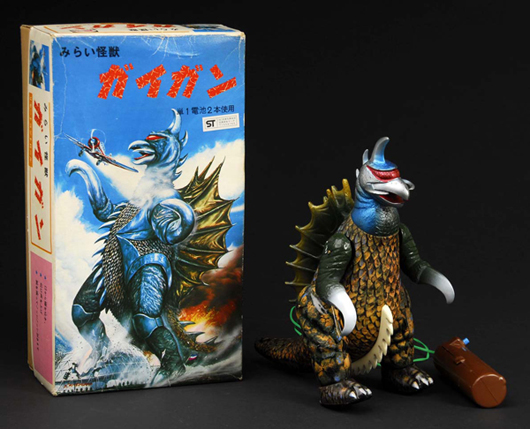 Tin and vinyl Giag toy, from the Marc Solondz collection to be auctioned Nov. 13-14 by Dan Morphy Auctions.