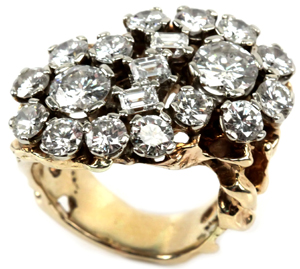 TALLAHASSEE, Fla. – A 10-carat diamond ring that Elvis Presley took from his hand and gave to a fan during a 1975 concert will sell Dec. 6 at a catalog auction to be conducted by Affiliated Auctions. Internet live bidding will be provided by LiveAuctioneers.com.

A unique and original piece of Elvis Presley-worn memorabilia, the ring was given to the consignor, Lloyd Perry, by Presley during a concert in Asheville, N.C.

It will be auctioned together with a complete file of provenance from the consignor, including an autographed copy of Lee Cotton’s 1975 book Did Elvis Sing in Your Hometown, Too (in which the gift event is referenced on page 208); three copies of the Asheville Citizen-Times and Bristol Herald Courier, both of which include stories about the event; more than 40 original photographs of the event as it occurred, other photos of Elvis wearing the ring at other venues, original tickets from the concert, and a letter of authenticity signed by the consignor.

The following account relates how the consigner became the owner of this ring, in his own words:

“Elvis was coming to Asheville, N.C., for three nights on July 22nd, 23rd, 24th 1975. A friend of mine got us tickets for the 24th and, believe it or not, it was front row seats, right in the middle of the stage. I could reach out and touch him we were so close. Of course, when Elvis came out the crowd went wild. We noticed he kind of looked at our group there in the front. Maybe it was the light and he could see us. Well, two or three songs into the show he turned, walked back to the center of the stage, and then turned around and threw his guitar toward me and this other guy seated next to me. We both caught it and played around with it. It was an old scratched up Gibson guitar, with Elvis Presley written in pearls down the neck.

“Although the other guy kept the guitar, I think Elvis wanted me to have it. After a couple more songs, all of a sudden my wife nudged me and said Elvis is motioning for you to come to the stage. Well, I looked up and went to the stage to shake hands with him, and to my absolute surprise, he was trying to put this ring on my pinky finger. I got him to put it on my ring finger while I was shaking like a leaf. I then went back and sat down.

“I remember the crowd was going wild. Afterwards Elvis walked back across the stage, shrugged his shoulders and said, “Aw, what’s $16,000.” Well, that night Elvis gave away his Gibson guitar and the ring, and the night before is when he gave JD Sumter the horseshoe ring. An amazing night I will never forget.” – Consignor: Lloyd Perry.

A member of the 506th Parachute Regiment, 101st Airborne Division, removed the tapestry from Himmler’s residence in Berchtesgaden in 1945. It is approximately 7 feet x 9 feet.

“This tapestry is a unique piece of world history, produced by a well-known tapestry maker at the time. You will not find another like it. I expect serious collectors and museums will express heavy interest,” said John Wright, lead military cataloger for Affiliated Auction Galleries.

For details contact Affiliated Auctions by calling 850-294-7121 or e-mail Malcolmm@affiliatedauctions.com. 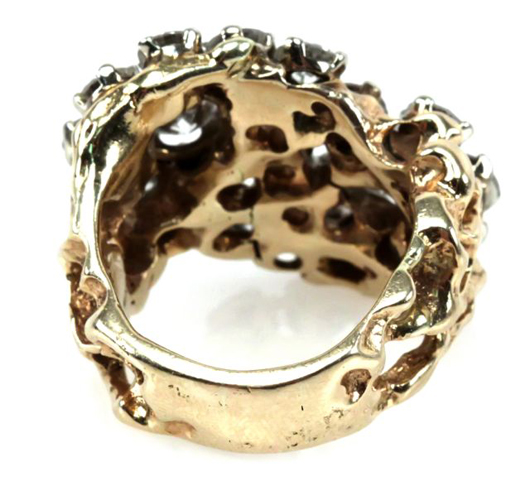 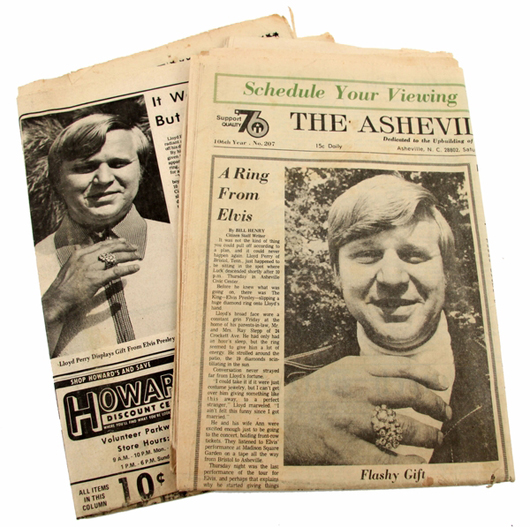 Local newspapers pictured Elvis fan Lloyd Perry wearing the diamond ring Presley gave him during a concert. The newspapers are among memorabilia to be auctioned with the ring. Image courtesy of Affiliated Auctions. 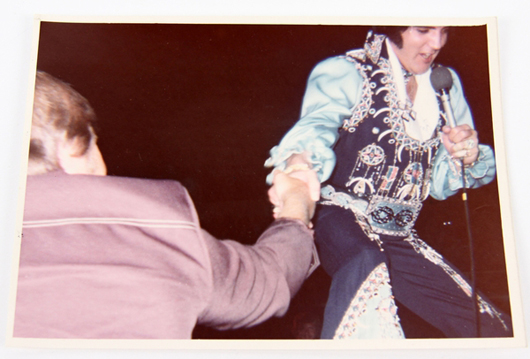 The King looked very regal the night he shook hands with Lloyd Perry, who was in the front row at the Elvis Presley concert July 24, 1975. Image courtesy of Affiliated Auctions.