DENVER, Pa. – Peter D’Acosta, whose 25-year collection of antique candlestick phones is featured on day two of Morphy’s Dec. 6-7 Fine & Decorative Arts Auction, says it was a classic American TV show that inspired him to “dial in” to the quaint early devices.

“In the late 1980s and early 1990s, I was running a TV station in Wichita Falls, Texas. I wanted to start a hobby that had something to do with the business of communications,” D’Acosta said. “Then one day while on a conference call, I glanced over at the TV that was always on in my office, and there was Andy Griffith [Sheriff Taylor on The Andy Griffith Show], talking on his candlestick phone. I thought, ‘How cool is that!’”

Before long, D’Acosta was scouring antique shops around Texas in pursuit of old phones. “This was in the days before eBay. You had to really look to find them,” D’Acosta said.

While hunting for new acquisitions, D’Acosta also became a knowledgeable historian on the subject of telephones. He briefly explained the timeframe surrounding his collection. “In 1876, Alexander Graham Bell was granted a 17-year patent on his telephone – the most valuable patent of all time. When the patent expired, so did his fundamental protections,” D’Acosta explained. “In 1892, Bell introduced the first upright tabletop telephones, replacing wall-mounted crank phones that were in common use, and in the 15 years following the expiration of Bell’s patent, more than 12,000 independent telephone companies sprang up around the United States.”

Hundreds of manufacturers began making new telephones for Bell’s competitors, but one by one, the smaller telephone companies folded because of the mammoth Bell AT&T monopoly. As Bell either acquired the local carriers or crushed them with their competitive muscle, the smaller companies’ telephones became obsolete and were destroyed. And that is why so many of the phones in Peter D’Acosta’s well-refined collection are so rare and desirable.

“The phones I specifically wanted for my collection were the beautiful upright candlestick phones. For each of them, I would seek out documentation to learn about their history,” D’Acosta said. Scans of the documentation are freely accessible on D’Acosta’s website (www.oldtelephones.com).

Every phone in D’Acosta’s collection has a special story, like Lot 801, a Western Electric No. 1 speaking tube desk telephone, which was Alexander Graham Bell’s first upright desktop model; and Lot 802, an American Bell No. 2 speaking tube desk set. Model No. 1, a Potbelly design, was probably introduced between 1893 and 1894. In fantastic original condition, it is one of the rarest telephones in the collection and is estimated at $20,000-$25,000. Model No. 2 was designed with an attractive swirl base. D’Acosta’s example is the earliest original American Bell desk stand known to exist in a private collection. It is the most valuable phone in the auction, estimated at $30,000-$40,000.

Other rarities in the D’Acosta offering include Lot 749, a 1903 Automatic Electric Company “Strowger” set, referring to Almon Brown Strowger’s innovative sunburst dial; and Lot 801, an 1897 Western Electric No. 9 Potbelly long distance desk phone. Each of the two phones is entered in the auction with an $8,000-$10,000 estimate. Yet another rarity is Lot 803, an 1897 N. 88-C “San Francisco Potbelly,” which was designed by California Electrical Works – a joint venture between Western Electric and Pacific Telephone. Of an unusual bronze-alloy construction in which the base and shaft are one piece, this phone could ring up a winning bid of $7,000-$9,000.

D’Acosta estimates that approximately 30 of the telephones in his collection are sole survivors. His hope is that they, and all of his other phones consigned to Morphy’s Dec. 7 auction session, will pique the interest of new collectors who will appreciate their historical importance.

Lots 926 through 932, inclusive, are from a different consignor but add very nicely to the historical timeline covered by D’Acosta telephones. The seven additional lots are museum-quality experimental phones attributed to visionary tinkerer and inventor Daniel Drawbaugh (1827-1911), who waged an eight-year battle against Bell Telephone Co., over the invention of the telephone. In 1888, the case was heard by the US Supreme Court, which found in Bell’s favor by a one-vote margin.

Dan Morphy, president of Morphy Auctions, noted that Drawbaugh lived in Harrisburg, Pa., and that his experimental phones previously had been purchased at the Bowman family estate sale. The Bowmans owned a prominent department store that opened in Harrisburg in 1871.

The Peter D’Acosta Antique Telephone Collection plus the additional selection of Daniel Drawbaugh experimental telephones will be auctioned on Sunday, December 7, 2014 (day two of Morphy’s Dec. 6-7 Fine & Decorative Arts) sale. The event will begin at 9 a.m. Eastern Time. Absentee and Internet live bidding will be available through LiveAuctioneers.

For additional information on any item in the sale or to reserve a phone line for live bidding on auction day, call 717-335-3435 or email info@morphyauctions.com. 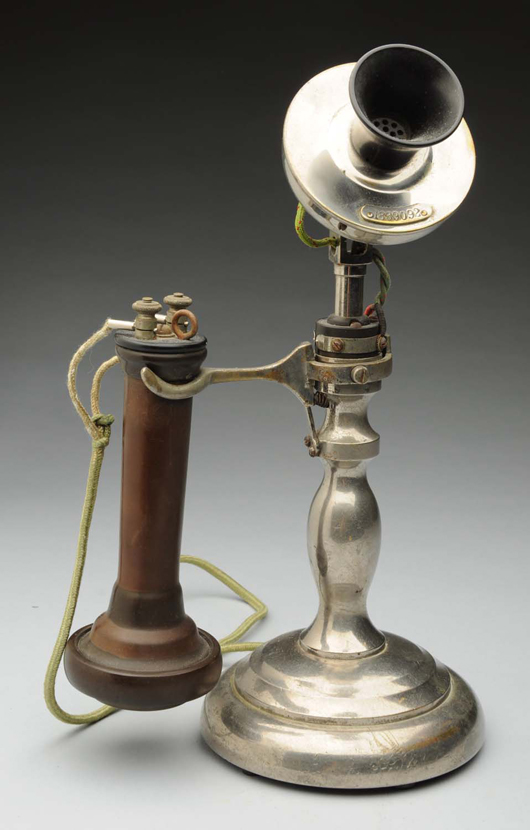 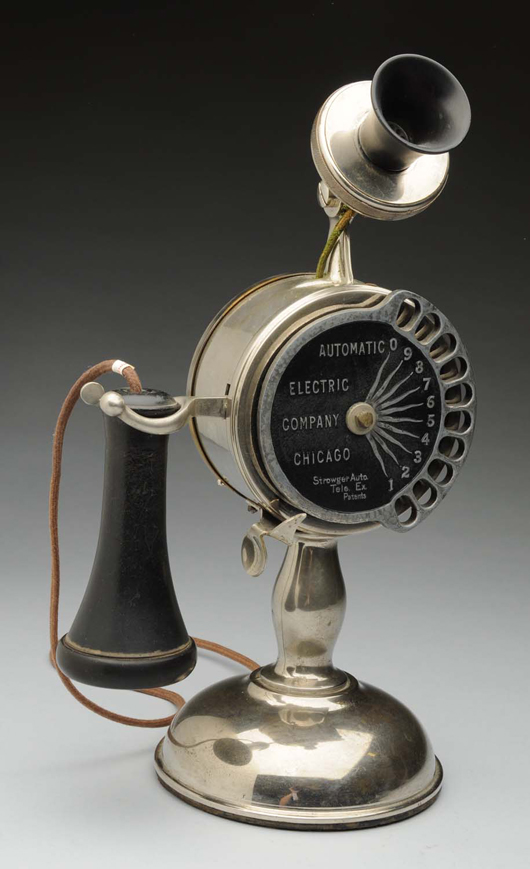 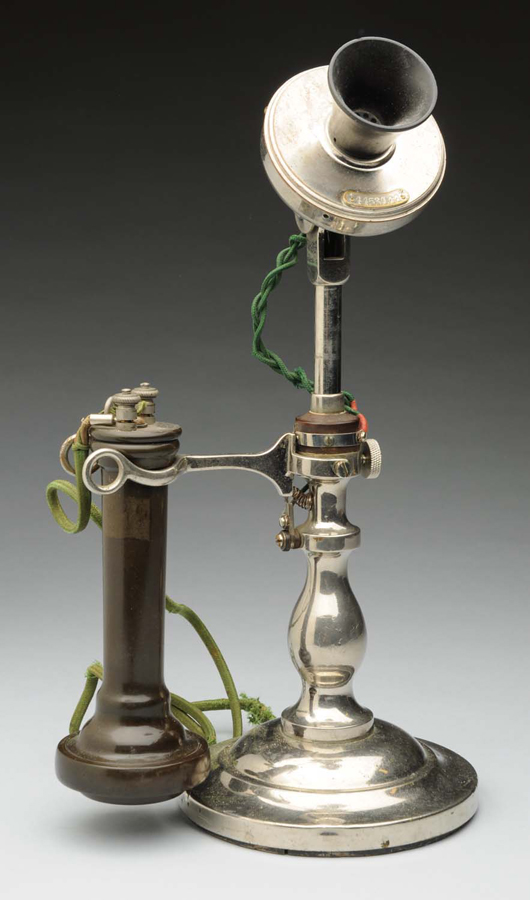 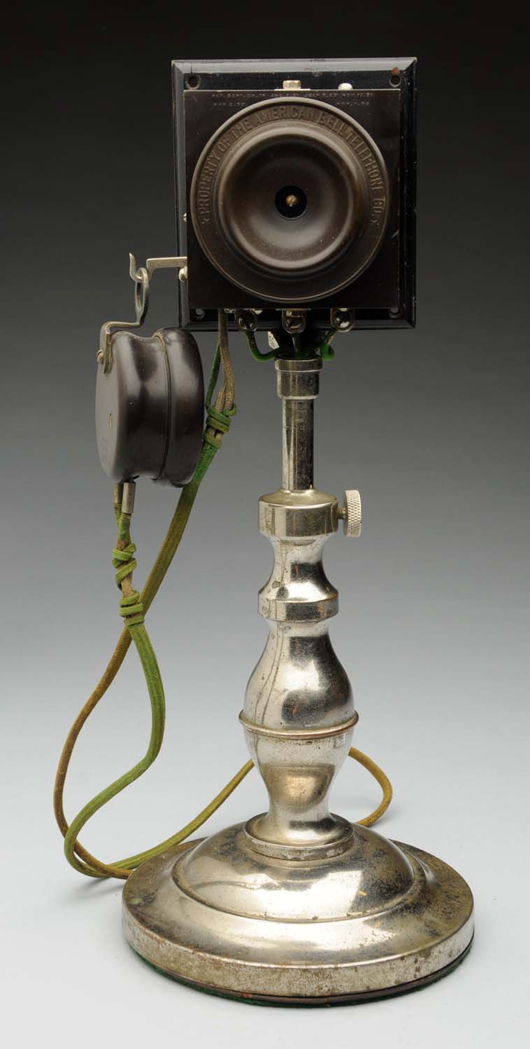