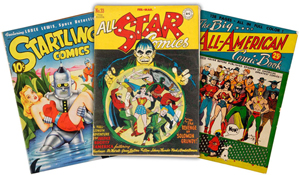 (Left to Right) Startling Comics, All Star Comics and The Big All-American Comic Book – examples from a fresh-to-market collection consigned by the family of the man who bought the comic books straight off the newsstand in the 1940s. In all, 300 lots of comics will be auctioned. Morphy Auctions image.

DENVER, Pa. – Mickey Mouse, a formidable legion of comic book Superheroes, and a classic 1950s Lavender Robot will all be on board when Morphy Auctions presents an Aug. 12-13 auction of antique and vintage toys, banks, marbles and comics. More than 1,100 lots will be offered in the mid-summer sale, with Internet live bidding through LiveAuctioneers.com.

The bus stops at Morphy’s on Aug. 12 for the sale of one of the most comprehensive toy bus collections known. The Wayne Mathias collection includes more than 100 toy depictions of Greyhound, Continental Trailways and other buses. A scarce plastic mold of a Greyhound Scenicruiser – one of several that were sent to Greyhound’s top 50 sales offices in the late 1950s – is expected to make $1,000-$3,000.

American and European trains – both prewar and postwar – will be next across the auction block, with highlights including a standard gauge 400 series loco and tender ($1,500-$2,500) exemplifying the largest steam engine ever made by Lionel. A one of a kind, museum-quality motor coach train made in 1932 by Russel Nord of Quincy, Mass., was modeled after one of the first known passenger trains, the DeWitt Clinton. Estimate: $1,000-$3,000.

Displaying unmistakable Continental style, an array of 25 European tin toys includes such favorites as a Lehmann Zig-Zag ($800-$1,200) and a menagerie of fabric-over-tin Schuco wind-up toys. Two German-made Carette cars – one with a roof rack for luggage; the other an open tourer – come with figures of drivers and passengers. Their estimates range from $1,200 at the low end to $2,500 at the top.

Japanese old-store-stock tin friction toys and wind-up vehicles will motor past the podium, with premium lots to include an 18-inch 1961 Yonezawa Cadillac Fleetwood and an 11-inch red Cadillac convertible by Alps. Both are accompanied by beautiful pictorial boxes and carry individual estimates of $800-$1,200.

More than a dozen robots await their day at auction, with the premier entry being a boxed 15-inch Masudaya Non-Stop (a k a “Lavender”) Robot. This striking member of the Japanese large-bodied, postwar robots known collectively as the “Gang of Five” could realize $4,000-$8,000.

Saturday morning starts off with 150+ lots of marbles, including sulphides, swirls and lutzes. A very rare sulphide with the suspended figure of a flying bat could reach $2,000-$3,000.

An exceptional and complete Lionel Walt Disney Mickey Mouse Circus Train has its original tin wind-up train, colorfully decorated circus tent, gas station and other accessory pieces, including the all-important composition figure of circus barker Mickey. Described in the catalog as “one of the nicer sets we have ever offered for sale,” the factory-boxed set comes to auction with a $4,000-$8,000 estimate.

For further information call 717-335-3435 or email serena@morphyauctions.com. View the fully illustrated catalog and sign up to bid absentee or live via the Internet at www.LiveAuctioneers.com. 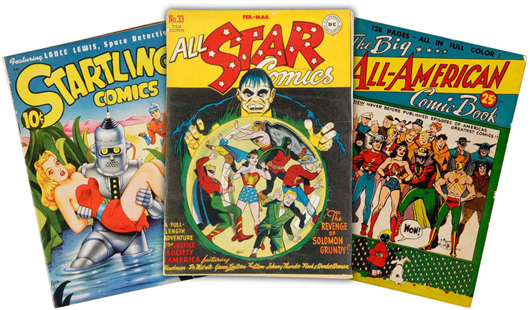 (Left to Right) Startling Comics, All Star Comics and The Big All-American Comic Book – examples from a fresh-to-market collection consigned by the family of the man who bought the comic books straight off the newsstand in the 1940s. In all, 300 lots of comics will be auctioned. Morphy Auctions image.