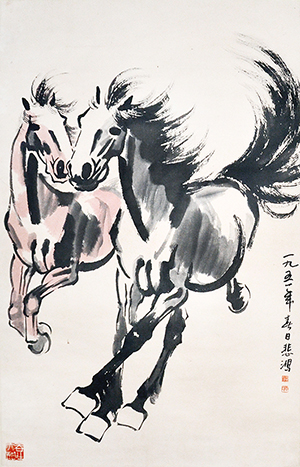 The morning season of paintings is well-rounded with figurative works by known Chinese modern artists, traditional landscapes and works of calligraphy, both historic and contemporary.

Leading the figurative paintings is Lot 32, Galloping Horses by Xu Beihong (1895-1953). The monochromatic ink-on-paper scroll dated 1951 is among the final works of the artist who was one of the first to articulate an artistic expression that reflected a modern China. Well traveled and extremely proficient in calligraphy, Chinese painting and Western oil techniques, Xu Beihong’s works have become increasingly more desirable in recent years. This painting of two horses in full gallop is signed “Beihong” and carries three artist seals. It bears the provenance of a Toronto collector and carries an estimate of $300,000 to $400,000,

Another highly collectable artist, Qi Baishi (1864-1957), whose works consistently break auction records, is represented by Lot 9, Bodhi Under Linden Tree. The ink-and-color on paper depicts the enlightened one wrapped in a cloak of blue, eyes closed and head resting on chest in a serene sleep. Set against a tree rendered in bold monochromatic strokes, the painting carries an inscription signed Qi Hurang, the artist’s original name, as well as two artist seals. Bodhi Under Linden Tree is expected to fetch between $100,000 and $150,000.

Another Qi Baishi work, Leaves and Insects, in the minimalist manner that came to be the artist’s signature-style, is positioned at Lot 26. Flourishes of brown, coral and red depict a tree in autumn, its sparse foliage attracting interest from a dragonfly and preying mantis. The ink-and-color on paper, signed Qi Baishi with one artist seal, is aptly valued at $60,000-$80,000.

Also among the figurative scroll paintings from the pantheon of modern Chinese painters is Lot 49, Zhang Daqain’s (1899-1983) portrayal of Sun Wei Resting Under Tree. It is stellar in its use of color, swathing a black-haired and mustached Sun Wei in a turquoise robe that falls onto a throw of blue. Red slippers carefully placed nearby complete the vignette that is set against a singular weathered tree trunk canopied with blue-green leaves. Powerful in its simplicity, the ink-and-color on paper is dated 1925, signed “Daqain, Yuan.” It carries three artist seals. The catalog estimate of $60,000-$80,000.

Lot 38 is a 13th century Yuan Dynasty ink-and-color on paper by Zhao Mengfou of Jiao Yuan and Stallions. It is the day’s most highly valued lot. With the provenance of New York’s noted Sai Yan Tang Collection, the delicately drawn painting in neutral colors with pink is signed Zhang and carries six collectors seals. It is expected to fetch as much as $8 million.

Meanwhile, for knowledgeable collectors seeking both beauty and solid investment art, the collection of landscapes offers values at a more accessible level. For example, Lot 39, the Qing Dynasty work by Wang Hui titled Mountain River, dated 1670, is a classic view of majestic mountains giving way to a vibrant river in which two small boats make their way. With one colophon by Wang Shim and three sales, it will command $40,000-$50,000.

The art of cursive script calligraphy is personified in Zhu Yunming’s Ming Dynasty three-panel scroll that presents a Huiqui poem. Lot 56 is inscribed and signed by Zhashan, Yunming. It has two artist seals, three Emperors seals, 16 collectors seals and one colophon by Bi Yuan. Calligraphy in Cursive Script of Huiqui Poem is set to go off at $100,000-$150,000.

Immediately following the paintings portion of the auction, collectors will find broad collection of Chinese ceramics and works of art, including deities and jewelry, that reflect the interest generated by the current raft of museum exhibitions at the Metropolitan and Rubin Museums of Art in New York City, the Nelson-Atkins Museum in Kansas City and the Asian Art Museum in San Francisco.

For instance, Lot 213, is a large gilt bronze figure of Vajrabhairava Yamantaka with Consort, one of eight Tibetan Buddhist protectors. Known as Manjshuri, the God of Wisdom, the frightful mythological figure is known for taking-on Yama, the god of death, thus preserving the triumph of knowledge and wisdom over death, also known as ignorance in Buddhism. Concurrently, in his form as Vajrabhairava, the deity is also associated with Bhairava, a form of Shiva who destroys the universe at the end of each Hindu epoch. In this duality, he is one of the most powerful gods of Tibetan lore. This sculpture presents Vajrabhairava with 35 arms, each holding a different implement, standing warrior-like atop a lotus base that supports a variety of prostrate figures. The deity’s primary arms, which are moveable, grasp his consort while holding a curved knife and skull cup. The highly articulated sculpture is clad in a belt of bones, skulls and snakes. Its wrathful face is surmounted by hair that rises into a flaming chignon of skulls. A remarkable example of bronze casting, the sculpture is composed of separately formed and moveable parts. Vajrabhairava Yamantaka with Consort is expected to fetch $40,000-$60,000.

Other deities in the sale include Lot 212, a silver figure of Vajrasattva. She stands on a double lotus blossom, hands holding varja and wearing a robe with delineated pattern adorned with gems. The bands on her arms are also set with gems as is the tiara that is topped with a varja finial. Weighing 1,278 grams (about 42 ounces) the silver deity is expected to reach as much as $10,000. Another deity is lot 211, a Qing Dynasty gilt bronze figure of Bodhisattva atop a plinth decorated with mythical beasts. The estimate is $3,000-$5,000.

Carved jades get off to a strong start with Lot 289, an unusual pair of Song Dynasty white jade dragons with fairies atop their backs. The powerfully carved beasts with bulging eyes, flared nostrils and bared teeth are captured mid-flight with their manes and tails flying. Each has a medallion on its shoulder and haunch. Placed nose-to-nose they appear to be combative. The stunningly handsome pair is of translucent jade with opaque buff inclusions. Measuring 3 1/2 inches high by 7 inches long, the pair carries an estimate value of $80,000-$100,000.

Moderately valued jade carvings include Lot 270, a set of seven carved jade bi plaques; Lot 264, a fine white jade carving of Hehe Exrian – two laughing boys seated on a lotus pond; Lot 266, a Neolithic Oijia-culture recumbent sphinx with hair in a bun, and Lot 267, an archaistic carving of Bixie. All are all valued at well under $10,000.

As the market for fine Chinese ceramics continues to swell, buyers will consider the merits of Lot 203, a masterfully potted five-spout Famille Rose lime-turquoise bottle vase. Of the Qing Dynasty and featuring stylized lotus blossoms amid dense scrolling foliage and intertwined vines, the vase is 6 1/2 inches high. Is of the period and has the six-character Qianlong mark. The catalog estimate is $30,000-$50,000.

The counterpoint is Lot 202, a Qing Dynasty lavender glazed quatrefoil vase delicately incised with a roundel of dragons and phoenix among a Shou character. At 6 3/4 inches tall, of the period and bearing the Qianlong six character mark, the vase will command between $3,000-$6,000.

Lovers of scholars objects will find Lot 188, a Famille Rose double peach brush washer, to their liking. Growing out of a gnarled branch base, the finely enameled vessel is adorned with dense scrolling bats and vines, double symbols of longevity. Of the Qing Dynasty and market with the Yongzheng four-character mark, it carries an evaluation of $6,000-$8,000. Of the same genre, Lot 192, a Ming Doucai brush washer with phoenix and peonies, is estimated at $1,000-$2,000.

Mid-level collectors will appreciate Lot 291, a 1928 Famille-Rose porcelain plaque depiction the god of longevity and a young boy. Inscribed with a poem and a long calligraphy inscription, the artist’s signature. a wuchen date (1928) and two seals reading Tao and Zhai, the nearly 14-inch-tall plaque (16 inches, with frame) is expected to bring $6,000-$10,000.

Typical of Gianguan auctions, the highlights are merely the tips of deep collections that will appeal to entry-level collectors as well as seasoned collectors. Specialty collections such as teapots and scholar items and gilt vessels are too numerous to mention here.

Chinese snuff bottles also command a presence in the auction. Lots 161, 162, 163 & 164, rare examples that range in value up to about $4,000, must been viewed for their unique beauty, coloration and craftsmanship.

Finally, the Gianguan Auctions June sale also features a collection of fine wristwatches and jewelry. Among the best are Lot 175, a diamond encircled Piaget yellow gold and diamond Polo ladies wristwatch, valued at $10,000-$15,000. Lot 176, a ladies Rolex gold DateJust wristwatch with diamonds in place of numerals carries a value of $5,000-$8,000. Two men’s wristwatches – Lot 177, an AMG Ingenieur Special Edition, and Lot 178, a Panerai Ferrari Guaranturismo Chronograph in a limited edition of 80 – are both excellent values at between $13,000 and $20,000.

For condition reports and detailed information, contact the gallery director at 212-867-7288 or email info@gianguanauctions.com. 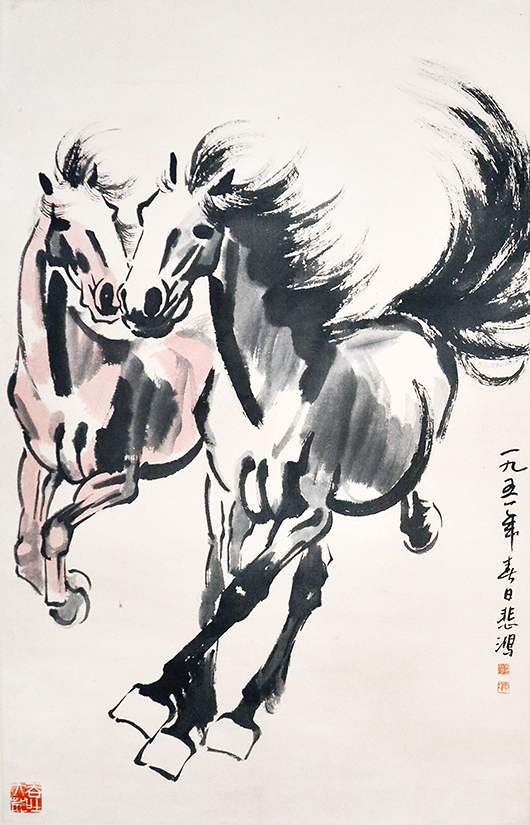 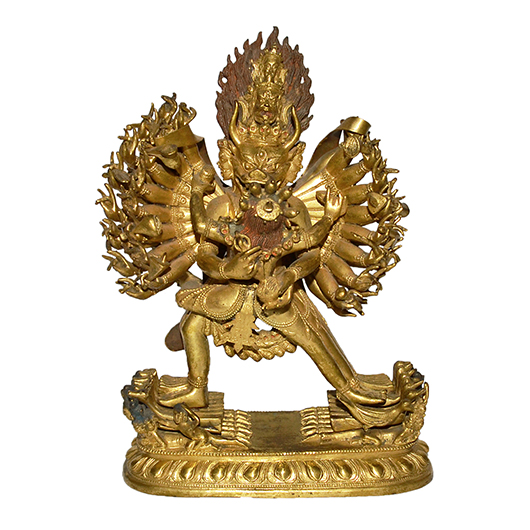 Lot, 213 is a 35-arm Tibetan gilt bronze deity in the form of Vajrabhairava Yamantaka with Consort. The multiple arms used for fighting off cosmic forces have moveable parts. It is of the Qing Dynasty, 9 1/2 inches tall. Estimate: $40,000-$60,000. Gianguan Auctions image.

Lot 289, an unusual pair of Song Dynasty white jade dragons driven by fairies and captured mid-flight. Each has a medallion on its shoulder and haunch. Of translucent jade with opaque buff inclusions, the pair is 3 1/2 inches high by 7 inches long. The estimate is $80,000-$100,000. Gianguan Auctions image. 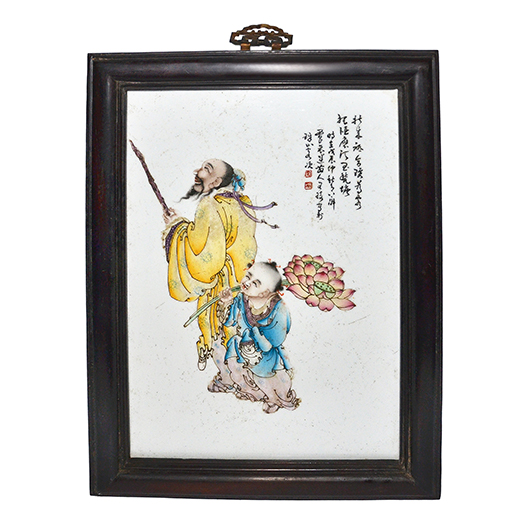 Lot  291, a 1928 Famille Rose porcelain plaque depiction the god of longevity and a young boy. It is inscribed with a poem and a long calligraphy inscription, the artist’s signature and two seals reading Tao an Zhai, the nearly 14-inch tall plaque  is expected to bring $6,000-$10,000. Gianguan Auctions image.