NEW YORK – Gianguan Auctions, specialists in premium-quality Asian art, is pleased to announce that its Asia Week Sale on Sunday, March 18 will open with a morning session of 86 Chinese paintings. Included are four by Zhang Daqian and six by Qi Baishi. Both Zhang Daqian (1899 – 1983) and Qi Baishi (1864-1957) made headlines in 2011 for breaking the auction records of Pablo Picasso and Andy Warhol.

Kwong Lum, proprietor of Gianguan Auctions, said the collection of Chinese scroll paintings, dating from the Qing Dynasty to the Republic Period, includes properties for both elite buyers and mid-range collectors. The catalog cover lot is Lin Fengmian’s Beauty, an oil on silk full-length portrait of a Chinese woman in evening attire against a night sky.

Among the landscapes are Ma Yuan’s Cliff Mountain, (Lot 53) and Shangri-la by Ni Yuanlu (Lot 80). Estimates on these lots are also by request. Zhang Daqian’s Ink Splashed Mountains, offers a modern treatment of the traditional subject matter with splashes of blue and teal clouds against the monochromatic mountainous landscape. It carries a $150,000 low estimate.

The landscapes continue with a Qing Dynasty painting Plum Blossom and Bamboo, by Wang Shishen. Through his hand the attributes of spring burst forth in a monochromatic scheme. Similarly, a more modern painting, Sunset on Ridge, 1948, by Pan Tianshou offers a modernist, nearly abstract portrayal of the countryside. Both are estimated at $50,000 to $60,000.

Meanwhile, collectors leaning toward prestige paintings will find the Emperor Qianlong’s Script Calligraphy of a Poem, 1757, accessible at between $15,000 and $20,000. Modern paintings include Cheng Shiafa’s Visitors, 1982, portraying Chinese women sharing a moment by an open fire, (Lot 62), and Peach for Longevity, (Lot 34) both with catalog estimates of $20,000 – $30,000.

While some collectors will find the Xu Wei’s Ming Dynasty Chrysanthemum and Rock, dated 1591, compelling, others will be attracted to a contemporary rendering of the natural world. Autumn Lotus Pond, by Wu Qingxia, dated 1978, is a colorful and spare study of cranes and birds among lotus.

Yet another favorite subject, scholars, is brought to life in Fu Baoshi’s A Gathering of Three Scholars. The ink and color on paper presents the trio in a naturalistic setting with tree branches and rock defining the space. It carries a catalog estimate of upwards of $100,000.

‘Imperial Hawk,’ by Zhao Ji (Song Huizong) dates to the Northern Song Dynasty. Ink and color on silk, inscribed and signed with one artist seal and four inscriptions. Image courtesy of Gianguan Auctions. 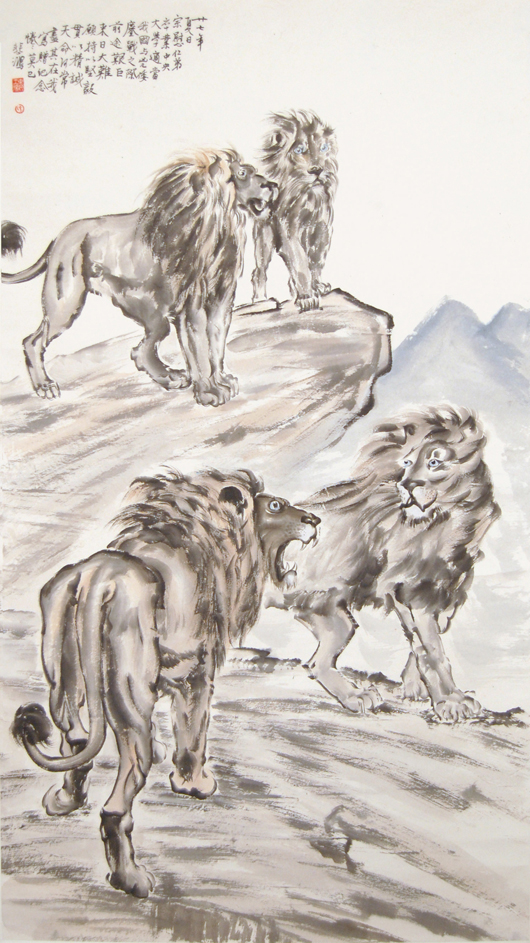