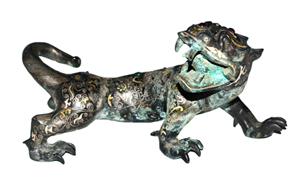 The morning session of paintings is one of the strongest in recent memory, mixing works from the Song, Ming and Yuan Dynasties with a field of modern and contemporary paintings. Later in the day, the decorative arts, including Chinese bronzes, antique porcelains, carved jades and luxury brand items, come under the hammer in what promises to be a lively session.

Several of the marquee lots reflect benchmarks in the evolution of Chinese history and art. For example, Lot 61, Stallion and Attendant, a Yuan Dynasty work by Zhao Lin, metaphorically challenges the Mongol influence by depicting a regal horse rearing against reins held by a fierce looking keeper. Intricately colored and meticulous in its detail, the painting carries one artist seal, eight collector seals and 11 emperor seals plus five colophons. It will command $400,000-$500,000.

Lot 51, “Mount Huangshan Amidst Cloud,” a Qing Dynasty landscape by Hong Ren, captures the mountain’s jagged peaks and plateaus in an early example of geometric abstraction. The ink and color on paper is titled, inscribed and signed. With two artist seals, two collector seals and one colophon by Cheng Zhenghu, it is valued at $600,000-$850,000.

Works by 20th century blue-chip artists include three by Li Keran (1907-1989) whose insights and knowledge of water buffalo and their young herders come through in the work. Lot 17, Cross the Willow Pond, is a study in movement as herder and water buffalos make their way through deep water. The catalog estimate is $80,000-$100,000. Lot 49, Autumn Leaves Color captures the light-heartedness of herders atop water buffalo reveling in a swirl of orange autumn leaves. Its estimate is $60,000-$100,000. Finally, Lot 67, A Shepherd, is a tour de force of humor in ink. A young herder contemplates a mountainous landscape while propped precariously in a gravity-defying pose on the side of the water buffalo. In the inscription, the artist compares himself to an overgrown school child. The estimate is $50,000-$80,000.

The ever-popular and prodigious Qi Baishi is represented by Lot 28, Rooster and Cockscomb. In an asymmetrical take on the subject, Qi Baishi, cocks the rooster’s head so that it can peer into a tree in the background, parodying, perhaps, the legend that roosters have eyes in the back of their head. Signed Qi Huang, the painting has one artist seal and is estimated $50,000 to $60,000. Lot 35, Chrysanthemum and Wine, a Qi Baishi still life, stresses longevity and good fortune. Its value is $50,000-$80,000.

Highlights of the afternoon session include exceptional Chinese porcelains from the Ming, Song and Qing dynasties. Lot 215 is a magnificent Ming blue and white lobed bowl. The 16 lobes are finely painted with 22 children playing in a court garden scene. At the center of the interior four children play. This auspicious sign is surrounded by Lingzhi and plantain. Of the period and bearing the Xuande six-character double-circled seal mark, the bowl is anticipated to command $400,000-$600,000.

Lot 222 is a pair of Cizhou carved green-glazed meipings. Of potted form, the vases are carved with wide bands of lotus spray. At the shoulder and foot are line borders and scrolling leaves. Ten inches high and of the Song Dynasty, they are valued at $15,000-$20,000.

Lot 204 is a fine yellow ground and green enameled Qilin vase. Of bulbous form with canted shoulder and long neck, the vase is decorated with the mythical hooved chimerical beast known as a Qilin. Of the Qing Dynasty, it bears the Yongzheng six-character mark and is valued at $4,000 to $5,000.

A mythical beast of gilt and silver inlaid bronze embellished with hard stone with dragon head and tiger body at Lot 248. Of the Warring States period and decorated with scrolling clouds, beasts and geometrics, the animal stands fore square and ferocious. Measuring 5 inches high and 10 inches long, the bronze beast is valued at $80,000-$100,000. A similar mythical beast, also silver inlaid bronze resides at Lot 253. Of the Warring States period, its estimate is $30,000-$50,000.

Meanwhile, Lot 250, a carved neolithic bone of the Liangzhu Culture (3400-2250 B.C.) will draw attention from natural history collectors. Retaining the shape of a lower jawbone with teeth intact, the specimen is carved with a Taotie mask. Its catalog estimate is $10,000-$20,000.

With the 2014 International Chinese Snuff Bottle Society meeting set for October in Hong Kong, interest in the collection of snuff bottles may soar. Prime items include Lot 270, a carved green-overlay on white glass Famille Rose painted snuff bottle. The Qing Dynasty bottle carries the Qianlong four-character mark. Its value is $3,000 to $4,000. Another excellent example is Lot 272, a pouch-shaped bottle with enameled cartouches depicting western figures of mother and child. The metal stopper has an integral finial and collar decorated with floral blossom. It is of the Qing Dynasty and has the Qianlong four-character mark. The estimate is $2,000-$3,000.

An extensive collection of carved jade personal items such as pendants, thumb rings, garment hooks, jewelry and a white jade belt. This is followed by carved hard stones seals. Outstanding among them is Lot 154, a Qing Dynasty, Jixue boulder carved in relief with nine dragons chasing flaming pearls on a beige Shoushan stand carved with dragon tortoise. It is estimated at $6,000-$10,000. At Lot 193, the carver’s art is distinguished by a Shoushan set of 12 military officials in full armor. Each is crowned with a zodiac animal head and is surmounted on a wooden stand. The set is valued at $6,000-$10,000.

The Sept. 14 sale will be held live at Gianguan Auctions, 295 Madison Ave in Manhattan, with Internet live bidding available through LiveAuctioneers. 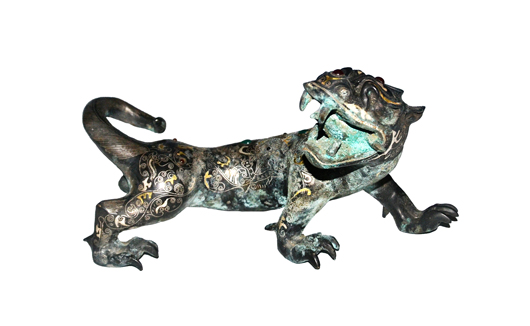 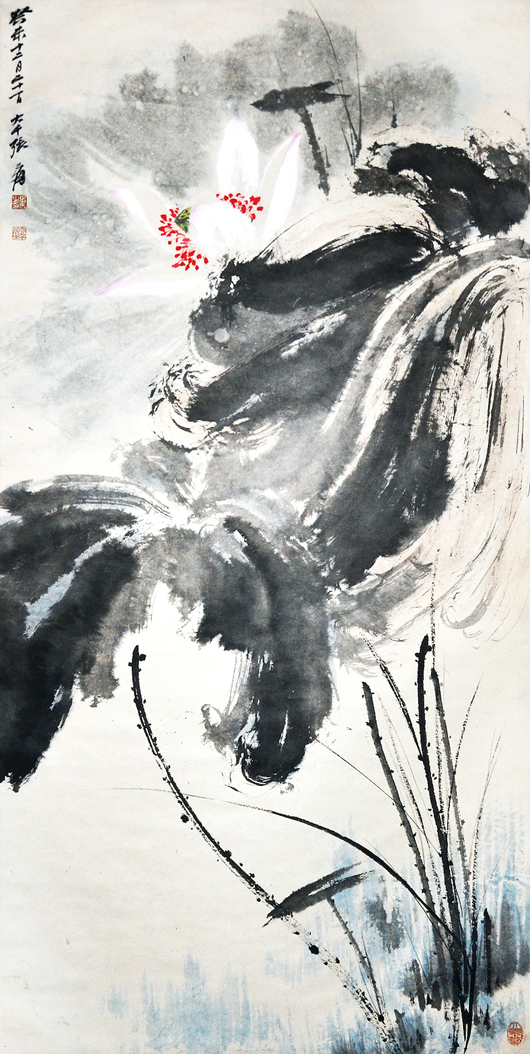 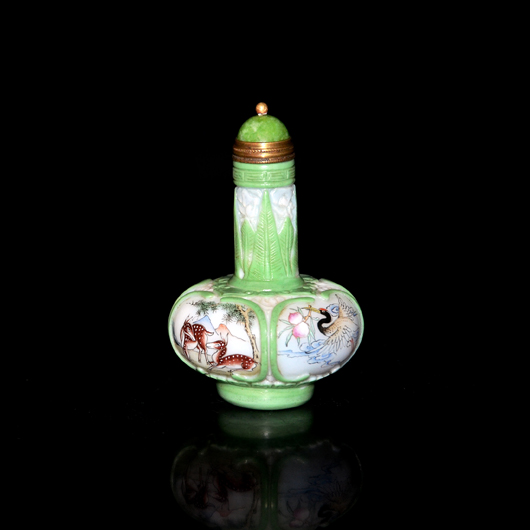 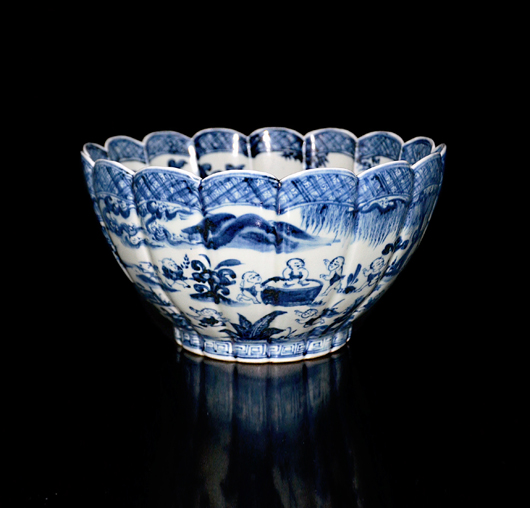