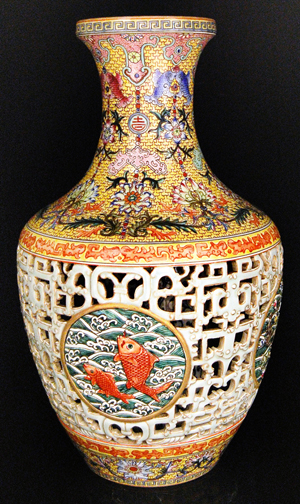 NEW YORK – When the afternoon session of Gianguan Auctions’ Asia Week sale opens on Sunday, March 18, all eyes will be on the yellow Qing Dynasty Famille Rose double-walled vase similar to the one that commanded £43 million, ($69.3 million) in Bainbridge, England, last fall. LiveAuctoneers.com will provide Internet live bidding.

Carrying an estimate that is offered only by request, Kwon Lum, proprietor of Gianguan Auctions, stated that the rare, reticulated vase (Lot 296) is a masterpiece of Qing Dynasty potters. Of ovoid form, the vase has a flaring neck decorated with ruyi and bands of floral bloom and twin fish. Jumping fish carved in relief amid incised turbulent waves decorate the vase’s body. An inner mallet vase in underglazed blue with scrolling floral sprays can be seen through the openwork piercings.

Preceding it is a seldom-seen Yuan Dynasty octagonal blue and white Meipng portraying six legendary Chinese figures. Unearthed in Hebei Province in 1964, the vivid freehand motifs depict Chinese figures riding a horse, carrying a sword, carrying a lute or a flower basket amid bamboo and rocks. Similar works are referenced in the Encyclopedia of Historic Relics, Volume of Porcelain, Plate 544/Page 330, complied by China’s National Bureau of Cultural Relics Administration.

Other highlights include a dodecahedral Junyao 12-petal planter with an extraordinary reddish-purple glaze in a cascading water effect. Both the design and the glaze represent the highest achievement of Junyao craftsmanship in the Southern Song Dynasty. It is Lot 269, estimated at a quarter of a million dollars.

Since only one buyer can own the planter, under bidders will take advantage of values among Chinese porcelains in the $20,000 to $40,000 range. Lot 298, for instance, is a rare Wanli period, Ming Dynasty Zhadou vessel of copper red undulating waves and blue and white mythical beast.

Among the antique bronze offerings is a Phoenix-head ewer with gold inlaid phoenix motifs (Lot 308). Well-cast as a phoenix standing facing forward with open beak as spout holding and a dragon tail handle, the well-cast bulbous ewer is then gold inlaid with a phoenix in flight encircled with clouds, birds and mythical beasts. On the side, are inscriptions and dragon motifs.

At Lot 305, a bronze recumbent buffalo inlaid with silvery phoenix motifs accented with incised Leiwen, is another fine example of the early art casting bronze. Lot 322 is a bronze ritual food vessel, Fang Ding, set upon four curling elephant trunk legs and cast with taotie masks. Each is expected to fetch $20,000 or more.

Among the Chinese niche specialties is a collection of rhinoceros horn carvings, including an exquisite pair of cylindrical perfumers featuring openwork carvings of writing dragons chasing pearls. Lot 196, estimated at a low of $15,000.

Subsequent rhino horn items include naturalistically carved wine cups translucent in color, with natural veining for about $7,000. A collection of smalls includes a well-carved figure of Buddha, wine cups and a figure of a lohan taming the dragon. These are all valued at less than $2,000.

Carved jades, those perennial favorites that are climbing in value, are well represented and most, like Lot 125, a white jadeite Qilin resting on its haunches, are valued at $5,000 or less. A finely reticulated Hetian white jade finger-citron vase, with a monkey clambering out a rock vase, is valued at a high of $2,500. And several glass jadeite lavender bracelets (Lots 132, 135, 167) range from $600 to $1,200 in value. 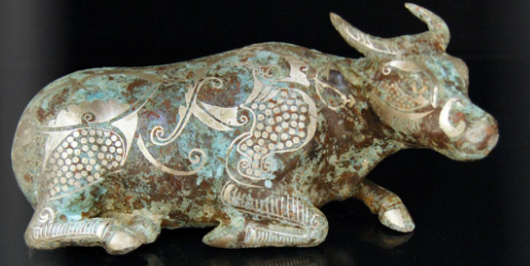 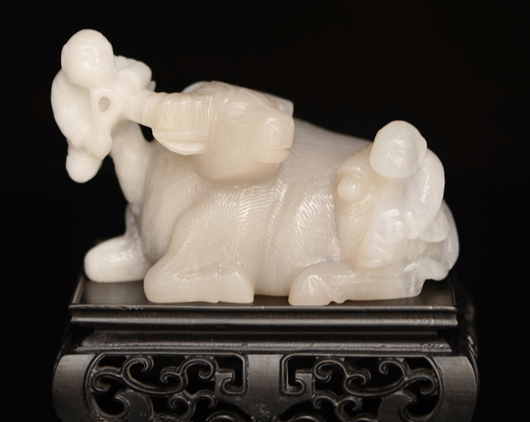