NEW YORK – Gianguan Auctions captures the best of the autumn Asian art season with a mixed sale of highly provenance Chinese traditional paintings,  ceramics, bronzes and carved jades, all supported by collections of  contemporary jewelry and decorative items. The sale is slated for Saturday, September 17, and absentee and Internet live bidding will be available through LiveAuctioneers.com. 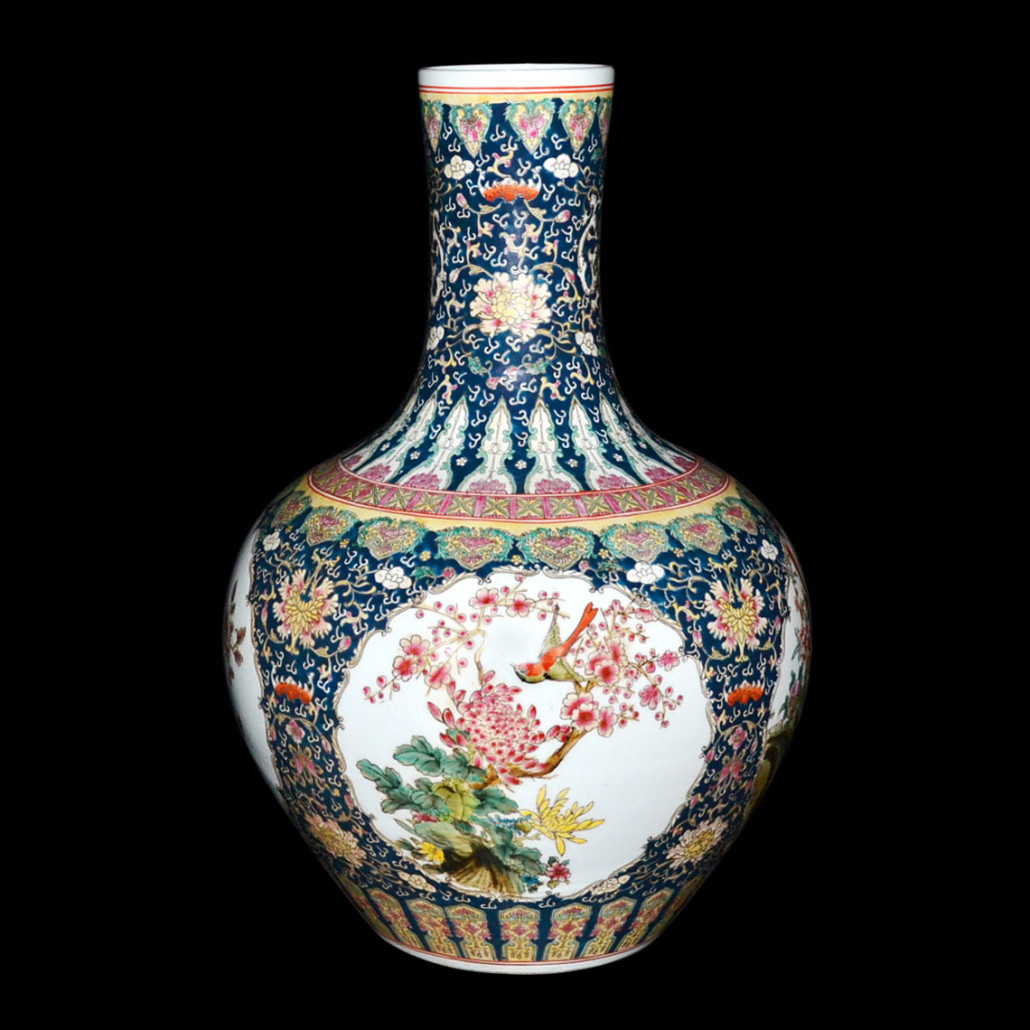 A sumptuous Qing Dynasty famille rose vase (shown above) headlines the Chinese ceramics. Standing 22½ inches tall, the long-necked bottle presents a ground of sacrificial blue against which four tian bai panels are decorated with stylized prunus, peonies, chrysanthemum, phoenix and birds. Overall, the vase feature nine layers of decoration, each painted and fired individually, in a range of emblems and florals. Of the period, the vase is authenticated by a blue reign mark, the Qing Dynasty and Qianlong six-character mark. Lot 241 is valued at $1.5 million to $2 million. 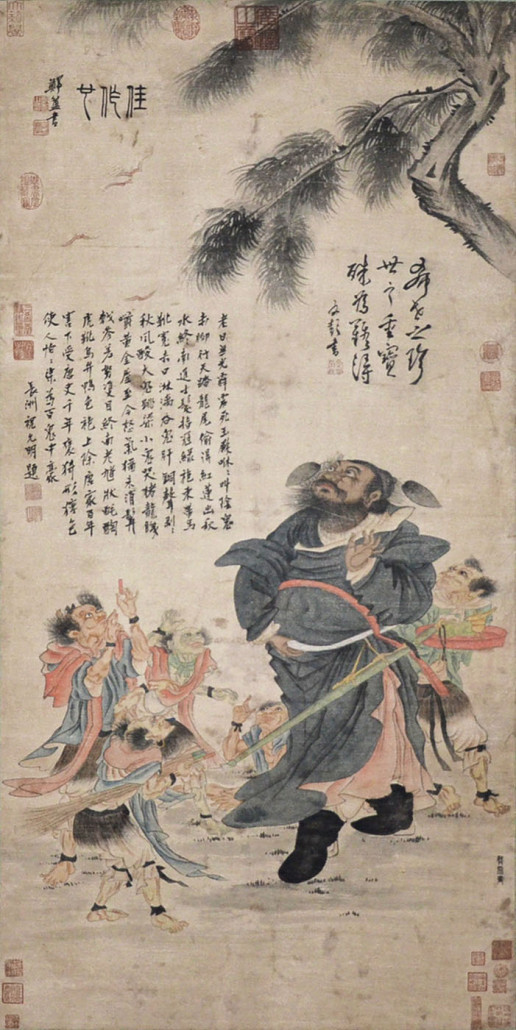 Gong Kai Draws on a Bat for Good Fortune, by Gong Kai (1222–1307) leads the paintings. Signed by the artist with eight Emperors Seals, 12 collectors seals, and colophons by Weng Peng and Zheng Fu. Estimated at $1.3 million to $2.8 million

Shown above, a Song Dynasty artwork titled “Gong Kai Draws on a Bat for Good Fortune,” by Gong Kai (1222–1307), leads the paintings. A Song military official, Gong Kai went into exile during the Yuan Dynasty and became a scholar/amateur artist. This work depicts a large, unkempt man in loose robes surrounded by small, balding apparitions. All appear frantically animated as they peer upwards towards an unseen bat. The ink-and-color on paper is most likely a protest statement against Mongol rule. The work is signed by the artist. Provenance is provided by eight Emperors Seals, 12 collectors seals, and colophons by Weng Peng and Zheng Fu, Lot 203 valued at $1.3 million to $2.8 million.
At the top of the collection of seals, and inch-for-inch the most valuable property in the auction, is an imperial spinach-green seal carved with a recumbent mythical ox-head mythical beast. Drama weighs heavily in the scaly body, furled ears and bifurcated mane. Of the Ming Dynasty, the 4-inch-square seal is of even tone, weighs 2609 grams and is carved in relief, zhuwen, with the Hongwu Imperial six-scrip seal. It is Lot 199, valued at $1,000,000-$2,000,000. 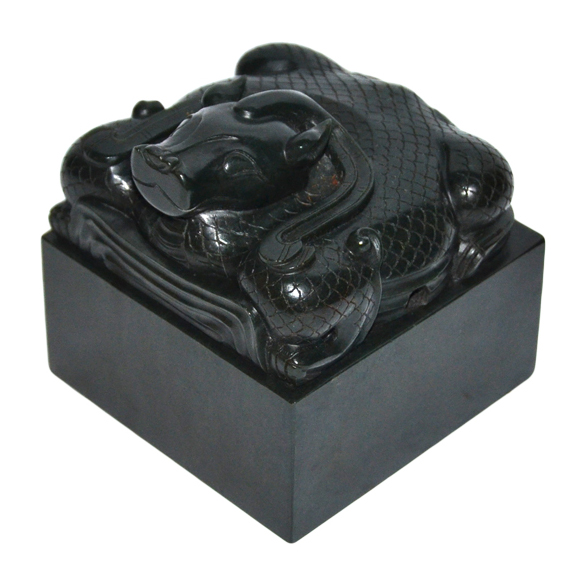 Adding to the charm of this sale is a single-owner collection of Warring States garment hooks. Acquired over many years by a California collector, the daigous are crafted of gilt bronze inlaid with gold and silver, turquoise, jade and mother of pearl. Their form alludes to dragons, qilin and tigers, all made for the ruling elite as symbols of power and nobility. Cataloged individually, the collection begins at Lot 140 and continues through Lot 155. The catalog high estimate for the whole collection is upwards of $30,000. 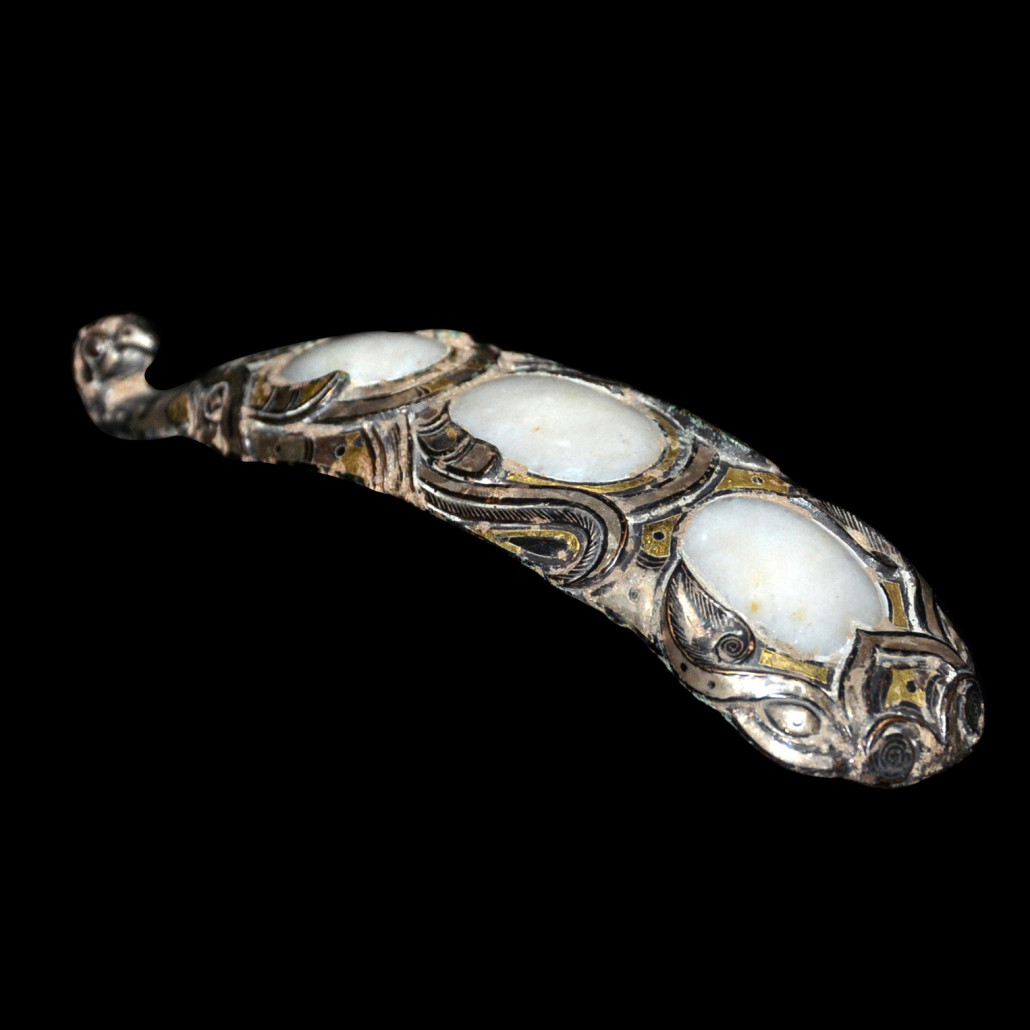 Highlights of the paintings, which are interspersed throughout the catalog, include a masterpiece by Zhang Daqian titled “Waterfall.”  Zhang painted this artwork in his later years with acrylic, a new medium he acquired during one of his trips to New York. While there, he met up with Kwong Lum, a student of his artist friend, Y Y Ding. Lum introduced him to Walasse Ting, another artist, and he visited their studios, where he saw them using acrylic. Inspired by this new-found medium, acrylic paint, and being a versatile artist, he applied it to his landscape paintings as splashes to affect the swirling cloud mood. “Waterfall” is a result of his exploration of splashed acrylic color. Without entirely abandoning figuration, he had scholars strolling along the paths. Painted with gold wash, “Waterfall” truly ‘procures the essence and transcends the phenomena.’ Entered as Lot 181, the painting is expected to command upward of $300,000.
Meanwhile, “Longevity,” a 1942 work by Qi Baishi, leads a collection of works by the artist. In this depiction of mother and child, the mother, seen from the back, is rendered in bold brush strokes. The child, with topknot of black hair and ruddy cheeks, peers out over her shoulder to see from whence they have come. Clad in a red shirt, the infant holds a branch with two blossoms. Lot 121 is inscribed and signed “Baishi” and has four artist seals. It is valued at $150,000 to $200,000.  (Six more Qi Baishi paintings run from $10,000 to $80,000. Check the catalog images and details.)

Li Keran’s legendary ability to evoke emotion is on display in “Laughing Monk,” a full-frontal depiction of an open-shirted monk caught in a moment of mirth. The work is entitled, inscribed Keran and bears two artist seals.  Lot 127 is expected to command $40,000-$50,000.
In  Cui Zifan’s “Autumn Color”, the artist employs a powerful a style of brushwork to evoke the colors of fall as stylized butterflies remind us of the ephemeral quality of all life. Lot 210 bears a modest estimate of $3,000-$4,000.
A pantheon of archetypal Chinese beasts are depicted in a semi-translucent carved jade wine pot. A phoenix-head spout erupts from the ovoid body that is embellished with writhing dragons while a curled bixie handle balances this. An archaic dragon commands the domed cover. In an unusual move, the antics put the reign mark on the cover’s rim. The stone is buff-white with russet inclusions. Lot 192 will fetch $80,000-$120,000.
The catalog cover lot is a carved jade sculpture of a pig nestled inside a coop basket with handle. The obverse of this Ming symbol of wealth and prosperity is an intricate basket-weave pattern adorned with a with Shou character.  The sculpture is 7 1/2 wide by 3 inches tall. It weighs nearly six pounds. Lot 136 has pre-sale expectations of $30,000-$40,000.
Even the most particular of connoisseurs would relish a rare spinach-green jade censer with flaring strap handles and cover. Of the Qianlong period, it is carved in narrow bamboo sections that stand as concentric rows of petals. A single ruyi decorates the cover.  At 5 ¼ inches tall, Lot 197 is entered with a $40,000-$50,000 estimate.
Magnificent examples of Chinese ceramics span dynastic tradition. Of the Song Dynasty, a pear shape, lobed Guanyao vase displays the era’s slightly bluish gray-green glaze suffused with a network of luminous lavender crackle. It bears the mark of Xiuneisi kiln at the Phoenix Mountain on the recessed bottom. Lot 158 carries a pre-sale value of $60,000-$80,000.
Similar in design and workmanship to two masterpieces in China’s Palace Museum in Beijing and Shanghai Museum is a blue and white dragon vase, 15-inches tall. As the symbol of Imperial power, the dragons on the vase compete for flaming pearls. Although a familiar theme, these dragons are rendered with strong expression and stance. Finely potted with two rims at the neck, the artistic measure of the vase is evident in the freehand flourishes of the master painter. Of the Qing Dynasty, with Kangxi six-character mark and of the period, Lot 157 is set to sell for $50,000-$60,000. 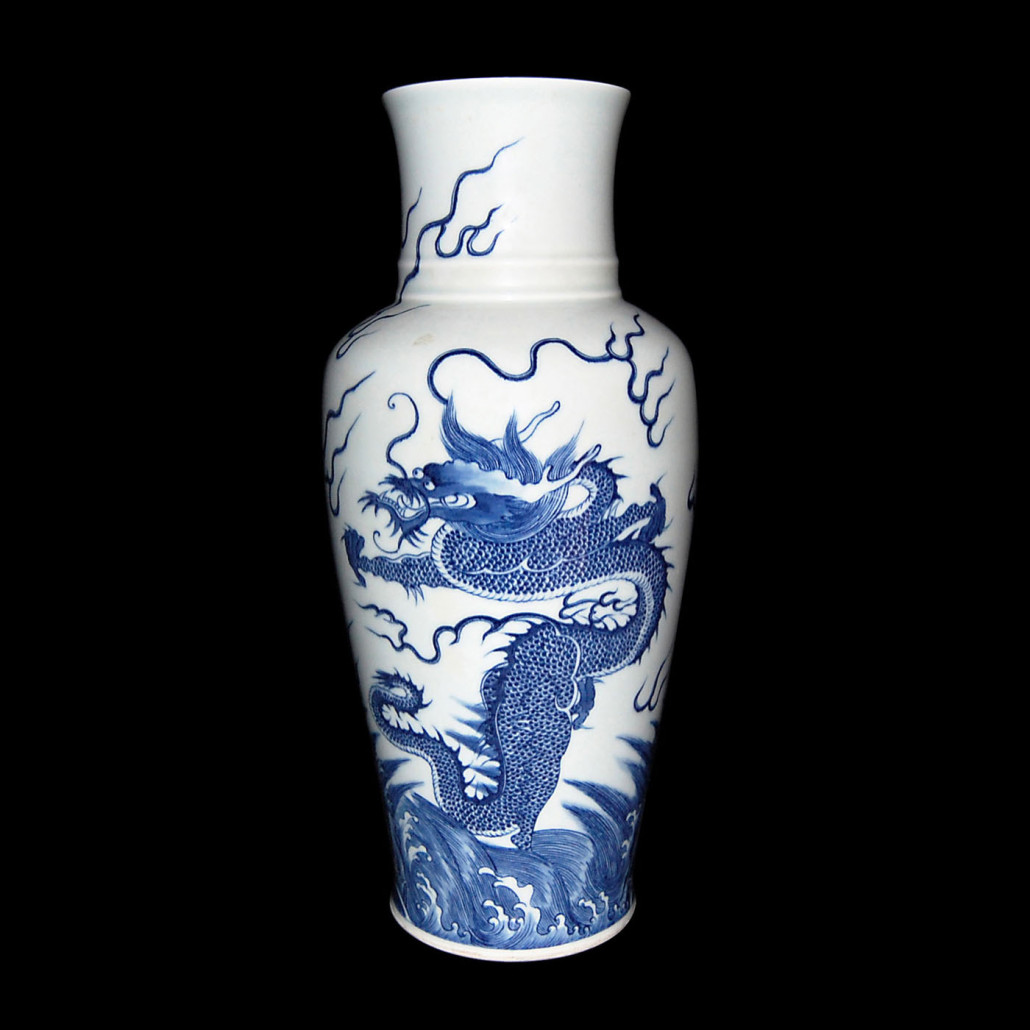 Blue and white dragon vase, 15 inches tall. Similar in design and workmanship to two masterpieces in China’s Palace Museum in Beijing, and Shanghai Museum. Qing Dynasty, with Kangxi six-character mark and of the period. Estimate $50,000-$60,000

Smaller, more manageable ceramics include a pair of translucent famille rose bowls decorated with prunus branches and bamboo shoots. Enameled in pink, yellow, brown, green and black on a white ground, the round bowls are of the Qing Dynasty, bearing the Yongzheng Four-Character Double Circles Mark. Lot 146, they are $8,000-$15,000.
The technique of producing copper red culminated during the Qing Dynasty, inspiring the archaistic-shaped pair of dragon vases that appear as Lot 149. With angular sloping shoulder above rounded base, the pair is decorated with dragons and key frets. They have a blue and white reign mark and the Qianlong six-character mark. The value is $6,000-$8,000.
Long China’s national treasure as well as personal trophies, jade jewelry at all price points will surely attract bidders. Lot 1 is a jade leaf pendant valued at $2,000. Lot 25, a jadeite and diamond leaf pendant cum ring may reach or exceed $15,000; while Lot 21, a jadeite leaf ring, is expected to reach $4,000-$5,000.
Rounding out the sale are collections of cloisonné snuff bottles, Shoushan stone seals, Neolithic earthenware ewers and jars, brush washers and scholars items. For additional information on any piece in the auction, call Mary Ann Lum at 212-867-7288 or email maryann@gianguanauctions.com.