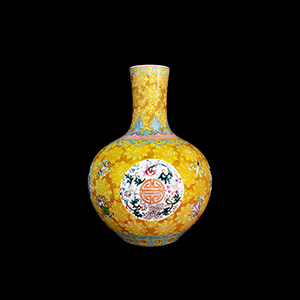 NEW YORK – ’Tis the season for collectors of Chinese and Korean works of art and estate jewelry to think of ways to best bestow good fortune and longevity through holiday gifts. To meet their needs, Gianguan Auctions will offer more than 300 items in their Dec. 8 sale. Many of the works of art are imbued with auspicious symbols. LiveAuctioneers.com will provide Internet live bidding.

The Asian art and collectibles span the centuries and dynasties, surfacing both high-level rarities and moderately estimated items, according to gallery director Mary Ann Lum.

The day’s morning session features 76 lots of Chinese paintings, a specialty for which Gianguan Auctions is becoming known. Among the highlights is Lot 14, a 1994 hanging scroll with one seal by Xu Beihong, master of both oils and Chinese ink. Painted from life studies, the cats are done in Chinese brush work with a Western perspective. Firm and bold brush strokes precisely delineate the forms. The catalog estimate is $60,000-$80,000.

Among the period paintings is Lot 17, a Qing Dynasty work by Hua Yan (Xinluo Shanren) titled Trekking in the Snow with Camel. The scroll portrays a man leading his camel in deep snow through tall mountains. It contains colophons by Tang Hanti, Jiang Que, Zi Qing, Shen Shuyong and Wu Yun. The estimate is $40,000-$50,000.

The ever-popular Qi Baishi is represented by Lot 22, Cicada on Maple, an ink and color on paper signed Qi Huang. It has two artists seals and a colophon by Yu Feian and is estimated at $50,000-$60,000.

In the same price range is Wu Changshuo’s Wisteria, Lot 26. The hanging scroll in and ink and color on papers inscribed and signed by the artist and bears two artists seals.

Although this scan of the high-level offerings is impressive, collectors can be assured that many other paintings are accessible, falling in the range of less than $20,000, such as Lot 25, Water Buffalo, a collaboration between two modern masters and close friends, Li Keran and Huang Zhou. They co-founded the Research Institute of Traditional Chinese Painting and made outstanding contributions to the preservation and promotion of national art, as depicted by the water buffalo and the colophon, ever serving the people.

Many smaller jewelry items of jade run through the second session. One of the more unusual is Lot 241, a carved turquoise cicada pendant portraying the insect nibbling on lotus leaves. It carries the Zhenghe Yu Wan mark and is estimated at $1,000-$2,000. Other bracelets and pendants that range from $600 to $3,500 are fully described and shown in full color in the catalog.

For the serious jade collector, Lot 245 is a magnificent and massive hetian white jade ruyi scepter in the form of a Lingzhi fungus. The reticulated surface is decorated with bats, peaches and pomegranates, all symbols of longevity. The end of the scepter is a large lingzhi. Notably, most ruyi scepters are rarely carved of a jade boulder such as this, which leads experts to believe that this one was probably for a person of high rank or commissioned by same for a special occasion to bestow good fortune. Its estimate is $50,000-$60,000.

A collection of Chinese ceramics kicks off with Lot 266, a pair of exceptionally rare Song Dynasty Qingbai figures of Fairchild Fairies. Glazed all over in transparent tones of pale blue, the reclining male and female figures, guardians of the Guanyin in Chinese mythology, are posed in reclining positions. They wear loosely draped robes and are rendered with serene expressions. Each figure is 7 5/8 inches long. The estimate for the pair is $4,000-$5,000.

Meanwhile, Lot 284 is a charming and rare Jiang Rong melon-shape Zisha teapot in the form of a Cicada, a symbol for immortality. The elongated lobed teapot has a looped handle in the form of a leafy branch. Its spout is a cicada head. The finial is a molded cicada. The Jiang Rong mark is on the underside. Estimate: $30,000-$40,000.

The porcelain marquee item is Lot 277, a magnificent famille-rose enamel Shou Vase with yellow ground. Masterfully potted, the large globular body has a tall waited neck. The decorations are stylized medallions of meandering floral bloom encircling a gilt Shou emblem, the symbol for longevity. There is ruyi head collar at the shoulder and a band of lotus skirting the base. The body is entwined with auspicious Bajizang motifs. Of the Qing Dynasty, the Shou vase carries the six-character Qianlong mark and is of the period. It is 14 1/2 inches tall. The estimate is $800,000 to $1,200,000.

Among the deities, the standout is Lot 327, a Qing Dynasty gilt bronze Guanyin. Seated and with broad face and downcast eyes, her hands in dhyanasana,the guanyin is loosely dressed and has a ruyi chignon. At 14 1/2 inches tall, the gild deity bears a Qianlong Imperial six-character impress mark and is of the period. It is expected to fetch $8,000-$10,000.

Several of the Korean antiques were sold through China Guardian Auction House in the early 1990s. The offerings include Lot 247, a 16th or 17th century Korean ceramic censer with cover in the traditional gray-white glaze. Just over 5 inches tall, it is of circular form with a cover pierced with trigrams and surmounted with a hexagonal bud finial. The catalog estimate is $6,000-$8,000. Lot 246 is a Korean blue and white Phoenix jar of ovoid form with faceted body and upright neck, decorated with confronting phoenixes writhing among clouds. Of the Joseon Dynasty, the estimate is $4,000-$5,000. Lot 251 is an unusual blue and white floral oil lamp, 5 1/2 inches tall, also of the Josean Dynasty. Its catalog estimate is $2,000 to $3,000. Lot 280 is a charming 17th century barrel-shape oil lamp with two lobe handles connected by wire. Of the Joseon Dynasty, the grayish-celedon glazed ceramic carries a $2,000-$3,000 estimate.

Session One begins at 11 a.m. Eastern on Saturday. 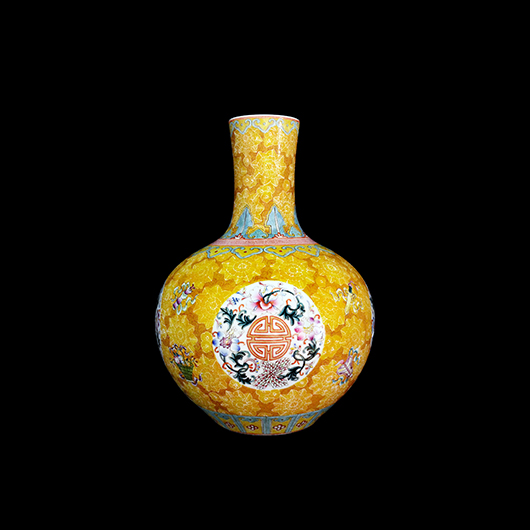 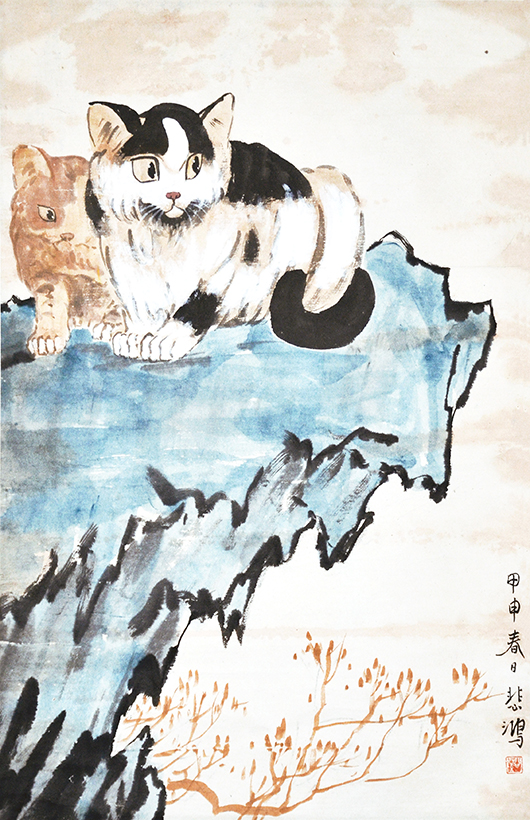 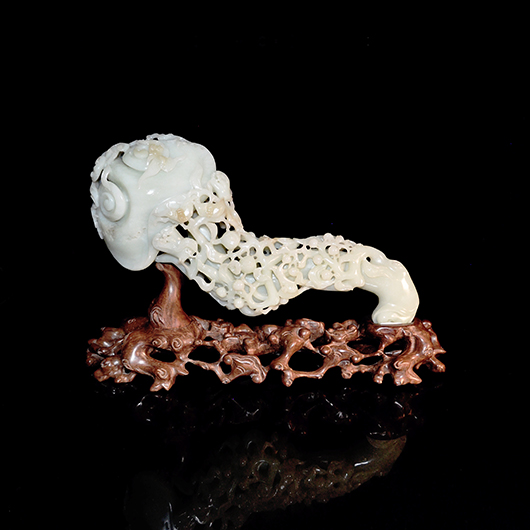 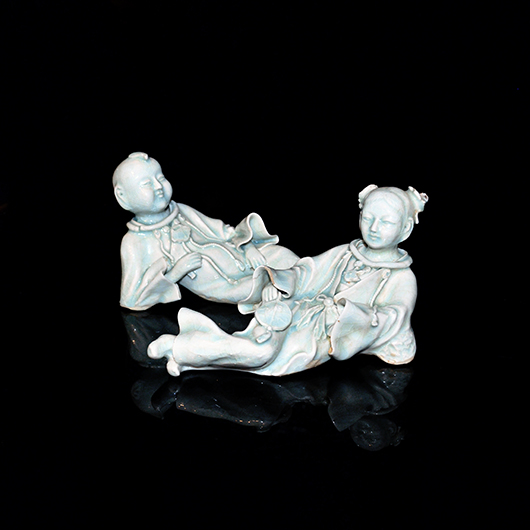 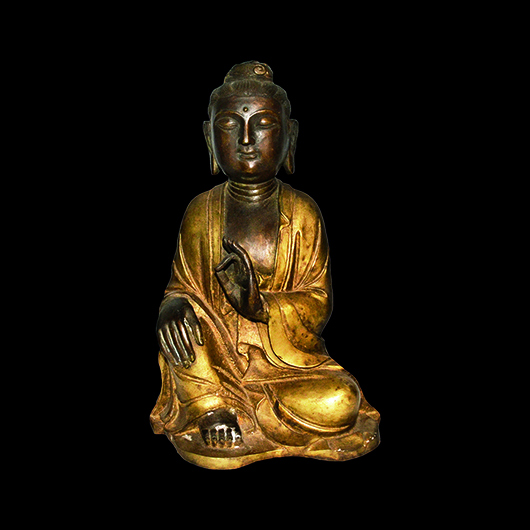