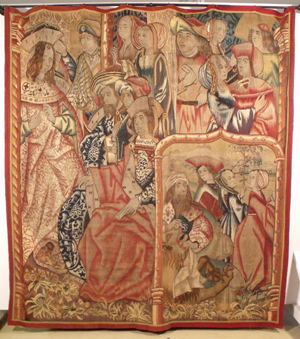 CLEVELAND – Gray’s Auctioneers of Cleveland, Ohio, will inaugurate the 2010 auction season on Saturday, Feb. 27 with one of the company’s most anticipated offerings to date. Internet live bidding for the sale will be provided by LiveAuctioneers.com.

The centerpiece among the 376 lots to be offered is an extremely rare late 15th/early 16th-century Franco-Flemish Gothic Biblical tapestry fragment depicting the life of David the shepherd boy, who became the King of Israel.

“It is our sale’s big superstar,” said Gray’s gallery associate Jennie Doran. “It depicts courtly figures with lavish robes and headdresses, in a field of flowers. The panel may have formed part of a larger narrative tapestry depicting the life of King David. This type of textile is known as a stage-set or altar tapestry and is characterized by jeweled columns separating various life scenes.” A similar tapestry, which illustrates “The Virtues and the Vices” may be seen at the Detroit Institute of Arts.

Doran said the King David tapestry, which measures 90 inches high by 83½ inches wide, has garnered considerable attention and promises to create “a particularly exciting moment” when it crosses the auction block on the 27th.

Other needlework will be presented as well. A charming collection of embroidered samplers stitched by young girls from the 18th, 19th and 20th centuries show the evolution of children’s education through alphabets, stitched imagery and poetry.

Another high note in the auction is the bronze sculpture by the Impressionist painter and sculptor, Edgar Degas. Titled Le Tub, the work depicts a woman reclining in a basin, bathing. It was created from the original Degas casting at the Hebrard Foundry sometime between 1919 and 1937. Truly one of Degas’ finest sculptural works, it has been authenticated by the Metropolitan Museum of Art’s Curator of European Sculpture, Clare Vincent, as well as the world’s leading authority on Degas sculpture, Walter Maibaum. It is entered in the sale with a $20,000-$25,000 estimate.

Additional sculptures to be auctioned include a bronze titled Bust of John Carroll, by Cleveland sculptor William McVey. The bust is a miniature of one that is held in the collection of the John Carroll University. McVey’s work is held in collections nationwide. He held a number of teaching posts including assignments at the Cleveland Institute of Art and Ohio State University.

Among the other fine art offerings is the oil-on-canvas painting Arc de Triomphe by Andre Gisson (American, 1928-2004).

Gray’s February auction is also notable for the more than 100 lots of stunning jewelry pieces featured. These include a beautiful and rare David Webb Ladies 18K yellow and white gold diamond melee ring, estimate $5,000-$7,000. Another David Webb piece design is a ruby and white enamel frog ring. A striking single-strand necklace of 8mm Tahitian grey pearls will also be sold. The necklace is particularly beautiful for the subtle pink overtone of the pearls.

Of course, the offerings don’t stop with artwork. Outstanding furniture and decorative items further illustrate Gray’s current catalog. Among the furniture offered is a Chinese walnut dining suite by Edward Wormley for Dunbar that includes an extension table and 10 dining chairs. Two other Dunbar lots round out the dining configuration, including a Chinese walnut 2-drawer cabinet, and a 6-drawer silver chest. A beautiful Gothic Revival-style mahogany trestle table with parquetry inlay is expected to make $1,000-$1,500.

For additional information on any lot in the sale, call 216-458-7695 or e-mail jennie@graysauctioneers.com. View the fully illustrated catalog and sign up to bid absentee or live via the Internet at www.LiveAuctioneers.com. 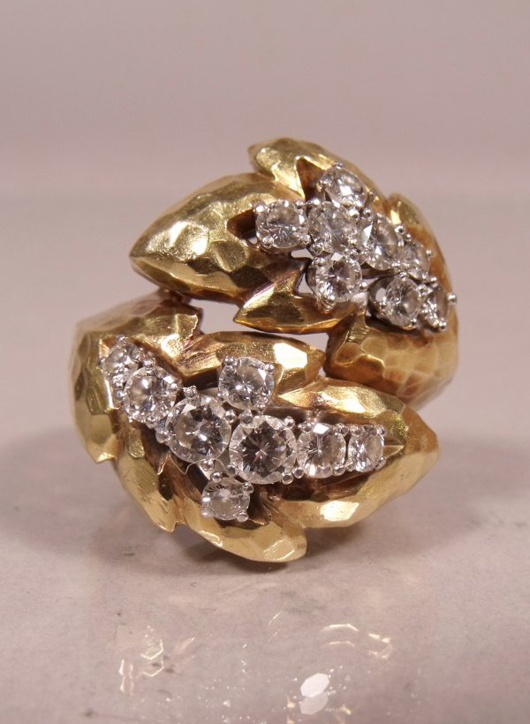 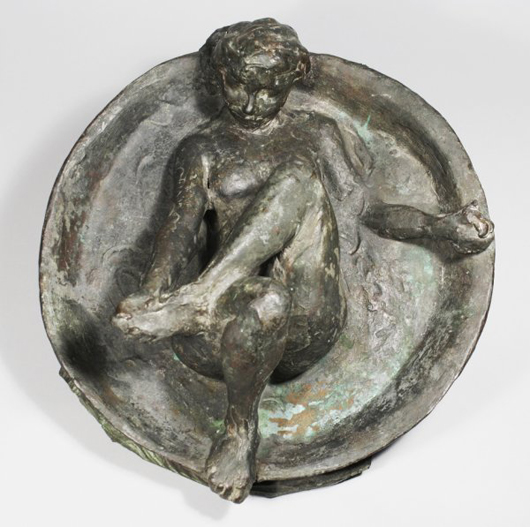 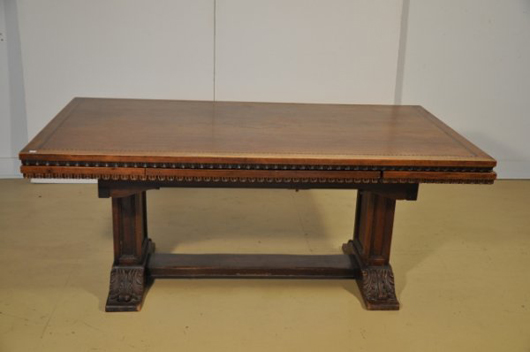