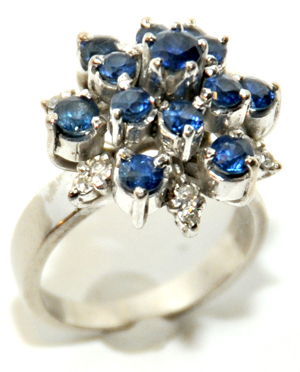 CLEVELAND – Gray’s Auctioneers’ sale on Wednesday, May 25, will feature fine works of art, decorative arts and furniture – and many of the lots have been donated to benefit the Cleveland Play House, America’s first regional theater, founded in 1915.

“The Cleveland Play House is like many cultural institutions facing reduced funding,” said Gray’s Auctioneers CEO Serena Harragin, who is also a director of the theater. “Deba Gray and I came up with the idea to have board members, subscribers and enthusiasts donate items instead of cash.”

Deba Jean Gray is president and auctioneer at Gray’s Auctioneers.

Gray’s Auctioneers is contributing their services to the fundraising effort, including free written and illustrated appraisals.

“More often than not, people donated something,” said Harragin, noting that donated items are tax deductible. “We’re making it an open-ended offer. We conduct an auction every month, so anyone can donate at any time.”

This month’s auction will feature a large antique Kerman Shah rug in the Tree of Life pattern. In Islam, Tree of Life rugs remain an important metaphor for the pathway between Heaven and Earth. Harragin said the rug at Gray’s is a beautiful example of its type, with depictions of animals around a bountiful tree. The rug, which shows normal fading and wear, measures 18 feet 3 inches by 12 feet. It is estimated at $3,000-$5,000.

A hand-signed and numbered Marc Chagall color lithograph titled The Tribe of Dan is another highlight. The lithograph on Arches Vellum is from the artist’s designs for stained-glass windows he created for the synagogue of the Hadassah Ein Kerem hospital in Jerusalem. Printed by Charles Sorlier and published by Fernand Mourlot, the lithograph comes with sound provenance and is included in Chagall: The Lithographs: Catalogue Raisonne. It has an $8,000-$9,000 estimate.

An artist’s proof of a Clement Meadmore (Australian, 1929-2005) bronze sculpture on a marble base is attracting attention. “The great thing about this work is it seems to defy the material it’s made of. It’s elegant and dynamic, but it’s a piece of bronze. Unlike the artist’s large outdoor installments, this 1984 work titled Open End measures only 12 inches wide and 5 inches high and 8 inches deep. It has a $10,000-$15,000 estimate.

“Meadmore’s work is nicely in demand now and this is one of his early works when he was designing outdoor installations (of this type),” said Harragin.

Another sculpture – this one of glass – came directly from the studio of Dominick Labino (1910-1987), the Toledo, Ohio-based inventor and designer. Labino developed the technique that produced the internal veiling in this 7 1/2-inch-high work from his Emergence Series. It will be sold with an autographed and dated studio catalog dated Dec. 16, 1982.

“Pieces from his Emergence Series have come up for auction before, but not this particular design. It’s absolutely beautiful, and I think it will do very well,” said Harragin. It has a $3,000-$5,000 estimate.

A choice example of the furniture available is an Osvaldo Borsani (Italian 1911-1985) mid-century modern T69 dining table, circa 1964. The 54-inch circular tabletop of solid walnut rests on elegantly shaped chrome-steel legs. It carries an $800-$1,200 estimate.

“It throws a wide arc of light while providing direct light for the person seated beneath it,” said Harragin. ““Reproductions of this iconic lamp are currently selling for $3,000. This is an original from the early ‘60’s and is estimated at $800-$1,200.

An 18th-century French provincial long bench is so choice that Harragin suspects it might end up being shipped back to its country of origin.

“It has lovely wormholes and all the things you look for in something like that,” said Harragin. The 92-inch-long bench is estimated at $500-$700.

More than three dozen lots of jewelry will be sold including a stunning 18K white gold, sapphire and diamond cocktail ring. “It’s from the 1960s, that era of Elizabeth Taylor and Richard Burton. It’s so beautifully done and it looks fabulous when you wear it,” said Harragin. The size 5 1/2 ring has a $400-$600 estimate.

The auction will conclude with two unusual lots that have a fascinating story behind them. The larger is a trophy tiger rug taken in India by Mary Lou and Jack Denton Scott, authors of Forest of the Night, a nonfiction book published in 1959. A copy of the couple’s memoir, which is in good condition and complete with dust jacket, is included with the lot. It recounts the actual hunt that took down the big cat that was terrorizing a village, said Harragin. More than 9 feet long from head to tail, the trophy rug has a $2,000-$4,000 estimate.

The final lot is a leopard trophy rug, also taken by the Scotts in India circa 1967 and just over 6 feet long. It, too, will be offered with a copy of the Scotts’ memoir, in good condition with dust jacket. The rug is estimated at $600-$1,200.

For additional information on any lot in the sale, call 216-458-7695 or e-mail info@graysauctioneers.com. 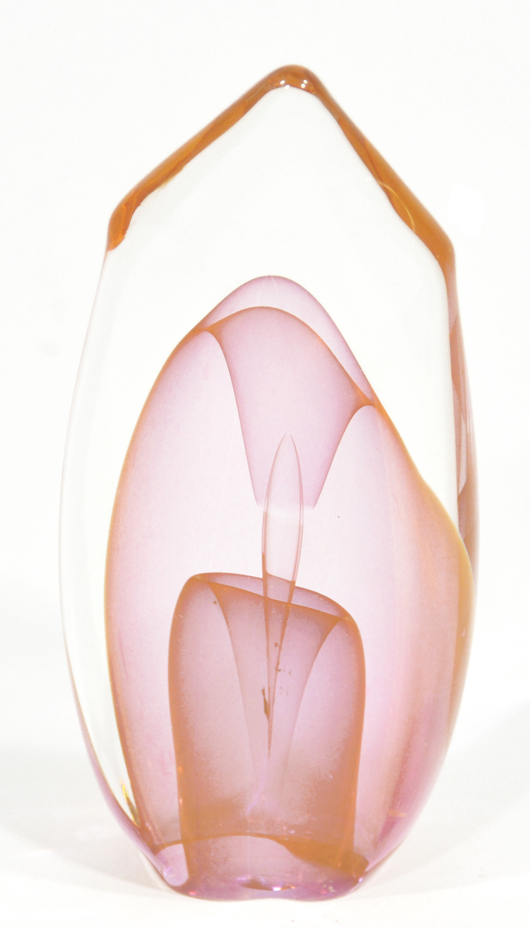 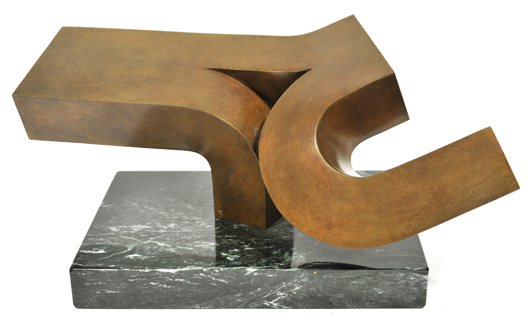 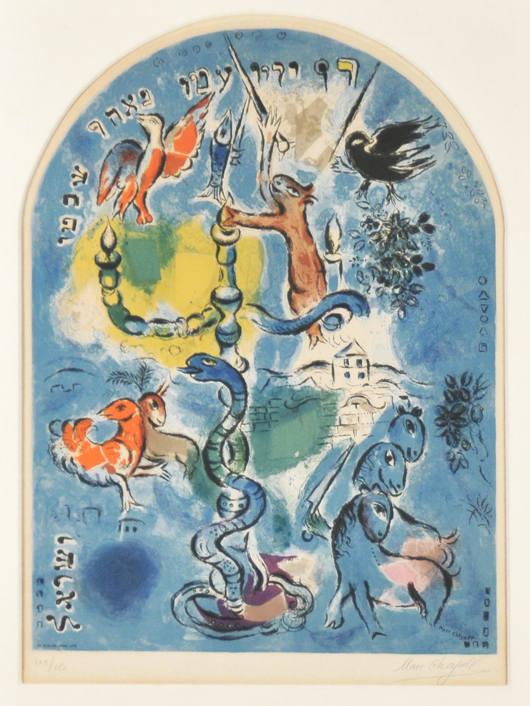 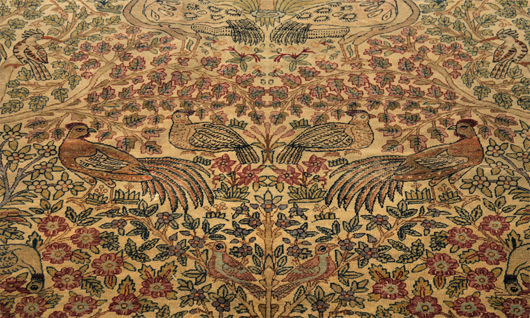 This detail shows the central design of the room-size Kerman Shah Persian rug in the Tree of Life pattern. Estimate: $8,000-$9,000. Image courtesy of Gray’s Auctioneers. 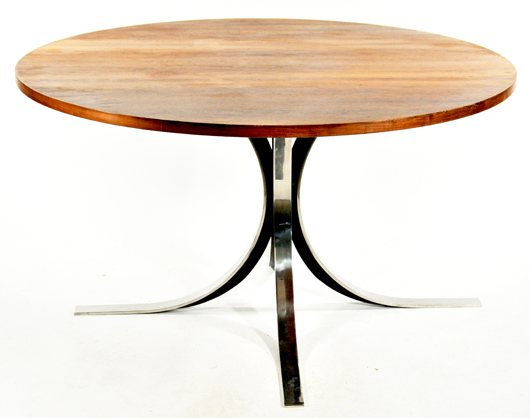 The solid walnut top on this circa 1964 Osvaldo Borsani T69 dining table is 54 inches in diameter. It stands on shaped chrome steel legs. Estimate: $800-$1,200. Image courtesy of Gray’s Auctioneers. 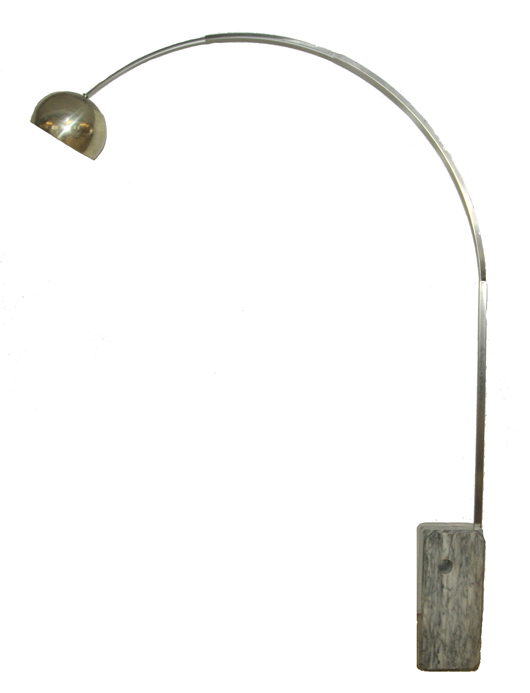 After 75 years it’s clear: Lucite is tough and beautiful

Unabomber belongings to be auctioned online
Scroll to top