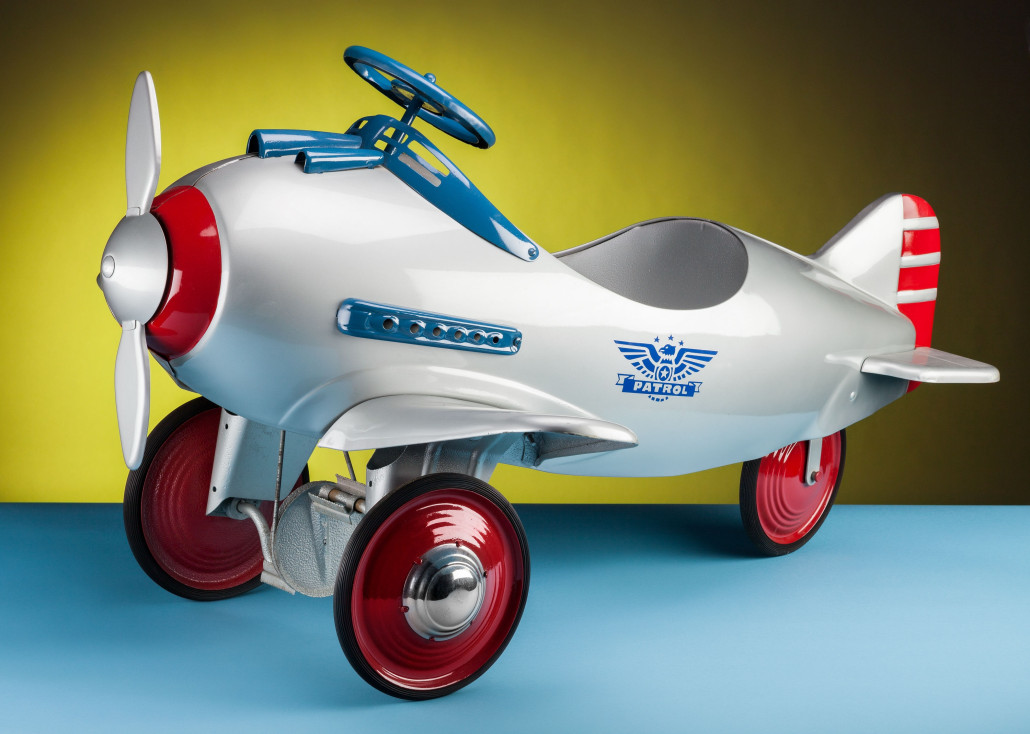 Viktor Schreckengost’s iconic Pedal Pursuit Plane, 1941, was put into mass production by Murray Ohio Manufacturing Co., for whom he worked for more than three decades as its most influential innovator. The auction marks the first time the artist’s own 1941 first-issue model has ever been made available to collectors. Estimate: $3,000-$5,000. Heritage Auctions image

As the first public auction ever dedicated to Schreckengost’s art, and drawn exclusively from his estate, the sale offers a near-comprehensive cross section of his achievement in all, media ranging from his student work in Cleveland and Vienna to his Art Deco period work contemporary with his iconic Jazz Bowl created for Eleanor Roosevelt, to his startlingly modern American dinnerware designs and bicycles, to his magnificent ceramic figures and vessels and award-winning paintings.

Alongside his acclaimed figurative Deco sculptures such as The Seasons (Summer, Fall, Winter and Spring), 1938, (est. $150,000), one finds original concept sketches, theater puppets, gorgeous bicycles, as well as work by his talented brothers, Paul and Don, who were also dinnerware designers. 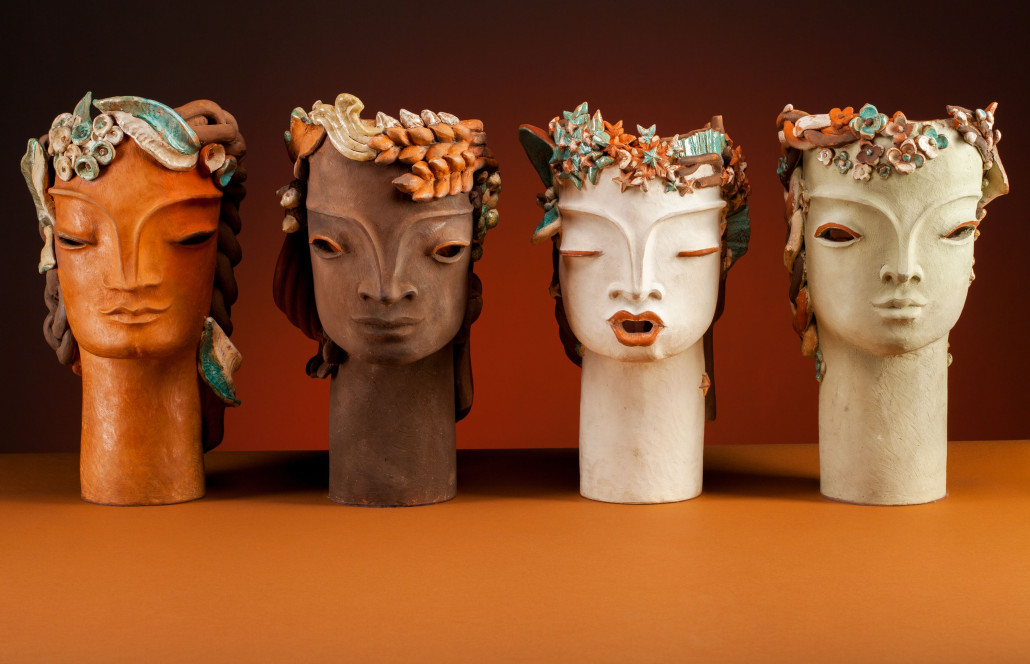 Schreckengost’s Art Deco sculpture titled ‘The Seasons,’ 1938, which is expected to sell for $150,000. Heritage Auctions image

“Viktor Schreckengost’s talents knew no bounds. His gifts for designing familiar items we use every day, so that they were not only more beautiful but also more functional, gave him a lifetime of joy. For products ranging from pedal cars to automobiles to dinnerware,” said Marianne Berardi, senior fine arts expert at Heritage Auctions, “Viktor developed streamlined designs with a modernist flair that forever changed the face of American products. Viktor also loved the idea that great design didn’t have to be reserved for expensive items. Embracing this populist idea, he was way, way ahead of his time. He imparted his ideas over the course of a 75-year teaching tenure to hundreds of students at the Cleveland Institute of Art, where he founded the first Industrial Design department in the United States.”

Unlike the other giants of industrial design who were his near-contemporaries, Schreckengost maintained a steady production of fine artwork in addition to his life in the commercial design world. 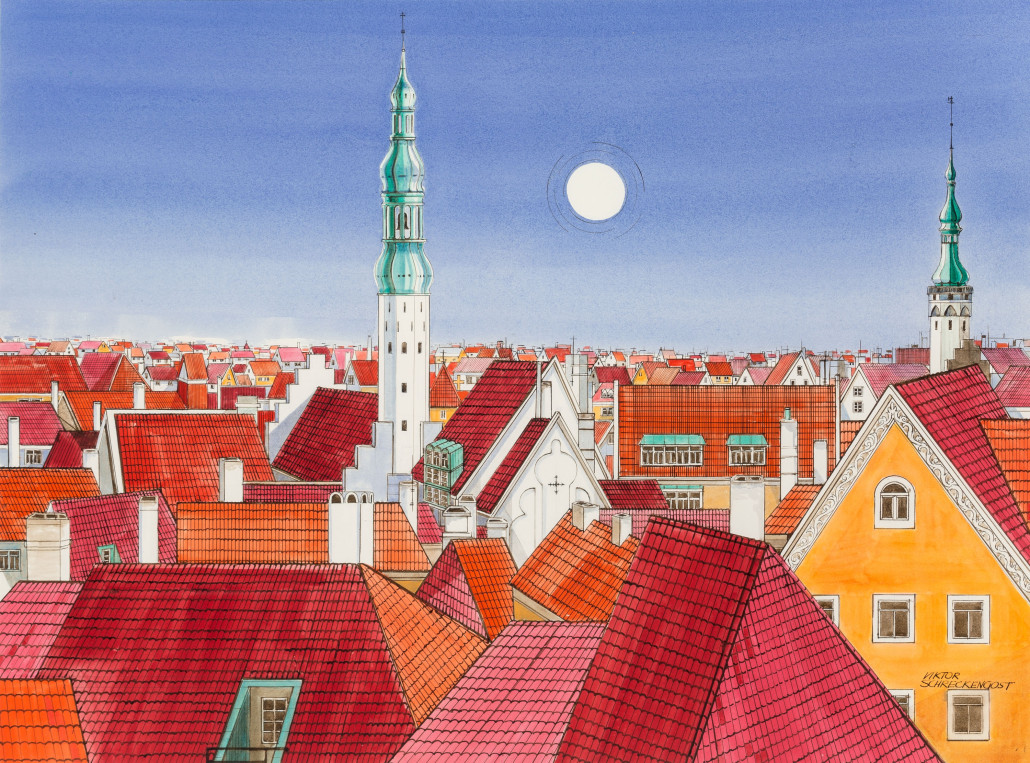 ‘Old Town,’ 1992, a vivid watercolor records a panoramic view of tile roofs and green spires which caught Schreckengost’s eye in the Old Town of Tallinn, the capital of Estonia. Estimate: $10,000-$15,000. Heritage Auctions image

His stunning pottery and sculptures – both on a small scale and on a monumental architectural scale – earned him critical acclaim for most of his life, even while he was heavily engaged in product design. His sculpture The Seasons (Summer, Fall, Winter and Spring), 1938, was so well received it was responsible for the creation of The Four Elements, another suite of four clay heads, that surmounted a towering, 10-foot-high display and dazzled millions at the 1939 New York World’s Fair.

Birth of Boogie Woogie, 1942, pays homage to the artist’s life-long love affair with jazz music. The sculpture is a fusion of jazz’s African origins and its unique transformation of musical culture in America (est. $25,000-$35,000).
A lifelong resident of Cleveland, Ohio, Viktor was often called on to create distinctive additions to civic projects and a set of four Original Presentation Models for the Cleveland Zoo Bird Tower, 1950, were used to fashion monumental 5 x 8-foot glazed terracotta wall reliefs (est. $10,000-$15,000).