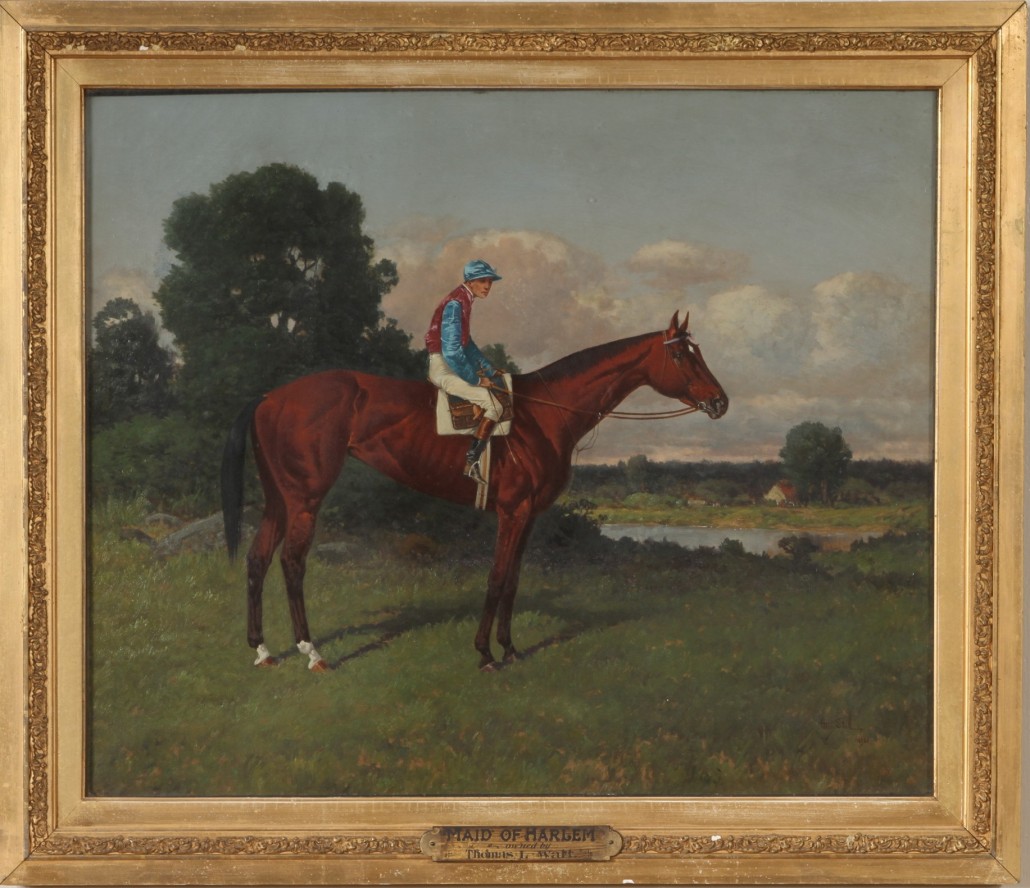 BRIDGEPORT, Conn. – Harlem’s rich historic past meets Cuban art and much more at Black Rock Galleries (BRG) during their Fall Estates Auction taking place on Sunday, Nov. 8 at 1 p.m. Eastern. Bidders may participate via LiveAuctioneers.com either by absentee bid or by Internet live bidding as the sale is taking place.

BRG will offer this fine collection of art, estate jewelry, antiques, and decorative arts to the highest bidders. Many of the lots offered in this auction hail from Harlem’s historic Watt-Pinkney family, including the estate of Beverley Lopez, great nephew of Archibald Watt and renowned artist in his own right. The Watt family farm and breeding stable was once the largest single property in Harlem.

“With this caliber of never before offered pieces of art held in multigenerational private collections, including Henry Stull equestrian works and Esteban Chartrand paintings, we believe collectors and art enthusiasts will be very excited to bid on these really incredible examples of fine and rare works,” said Grant Panarese, one of BRG’s managing partners. “We anticipate a lot of interest in many of the lots being offered and expect to see some really intense bidding on some of these pieces.” 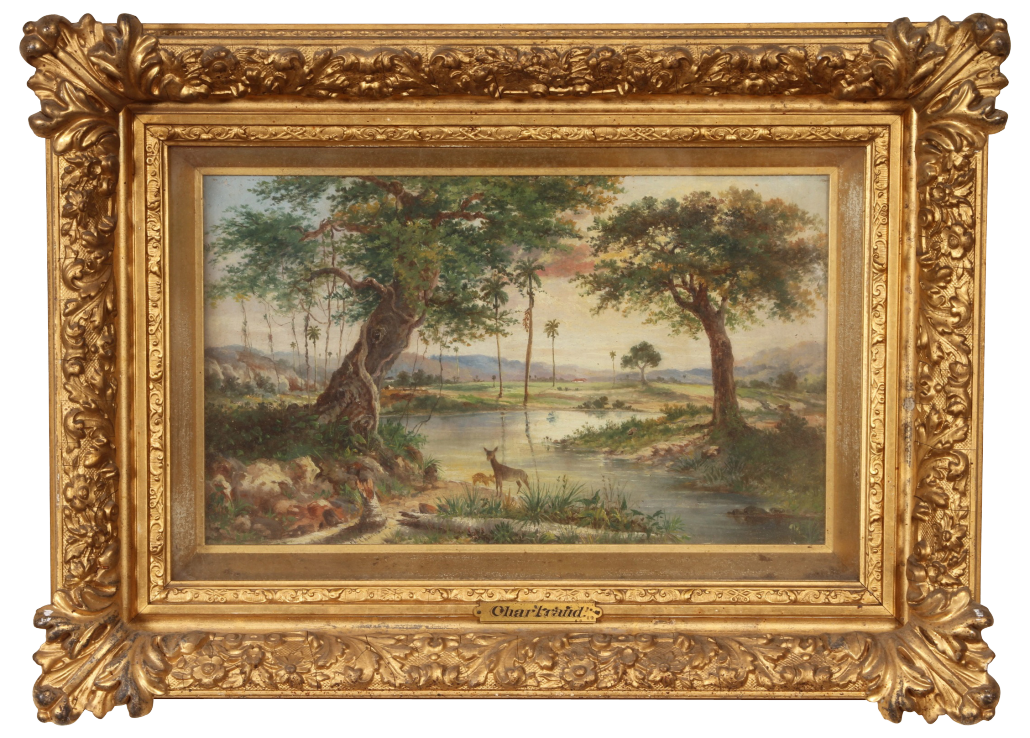 Auction highlights include:
— Five magnificent Henry Stull (Canadian, 1851-1913) paintings commissioned by the Watt-Pinkney family, who owned much of what is modern-day Harlem. The family bred renowned thoroughbred horses including “Maid of Harlem,” one of the featured pieces in the offerings;
— Three pristine Esteban Chartrand (Cuban/American, 1840-1884) oil on wood paintings depicting Cuban landscapes – all hailing from the estate of artist and descendant of the Watt-Pinkney family, Beverley Lopez;
— A detailed pen, ink and dry brush sketch, Dun Gone, by Edward Borein (American, 1873-1945) featuring a cowboy on a bucking horse;
— Two impressive Carl Kauba (Austrian, 1865-1992) cast bronze sculptures of native Americans;
— An oil on canvas attributable to Wifredo Lam (Cuban, 1902-1982) titled Barcelona Harbor, 32 inches by 39 1/2 inches, from a private collection of television producer, Pedro Font;
— Stunning estate jewelry including a 3.93 carat diamond platinum-set engagement ring, a 2 carat marquis diamond ring, and a gold and diamond bracelet;
— Two military commission documents: a Pinkney appointment to first lieutenant dated 1802, signed by Thomas Jefferson as president and countersigned by Henry Dearborn, secretary of war and the other an appointment to colonel for Ninian Pinkney dated 1821, signed by James Monroe as president along with a John Calhoun, secretary of war countersignature;
— A George III mahogany bookcase owned by John D. Rockefeller Sr. at his Water Street New York City building and was acquired by the Lopez family around 1911.
— A pair of Carlyle Hotel conference chairs used by President John F. Kennedy on Sept. 24, 1961 during his meeting with disarmament advisers Arthur Dean, John McCloy and Secretary of State Dean Rusk;
— A rare silk and stump work with oil paint highlights of the Watt-Pinkney Mansion in Harlem circa late 1800s. 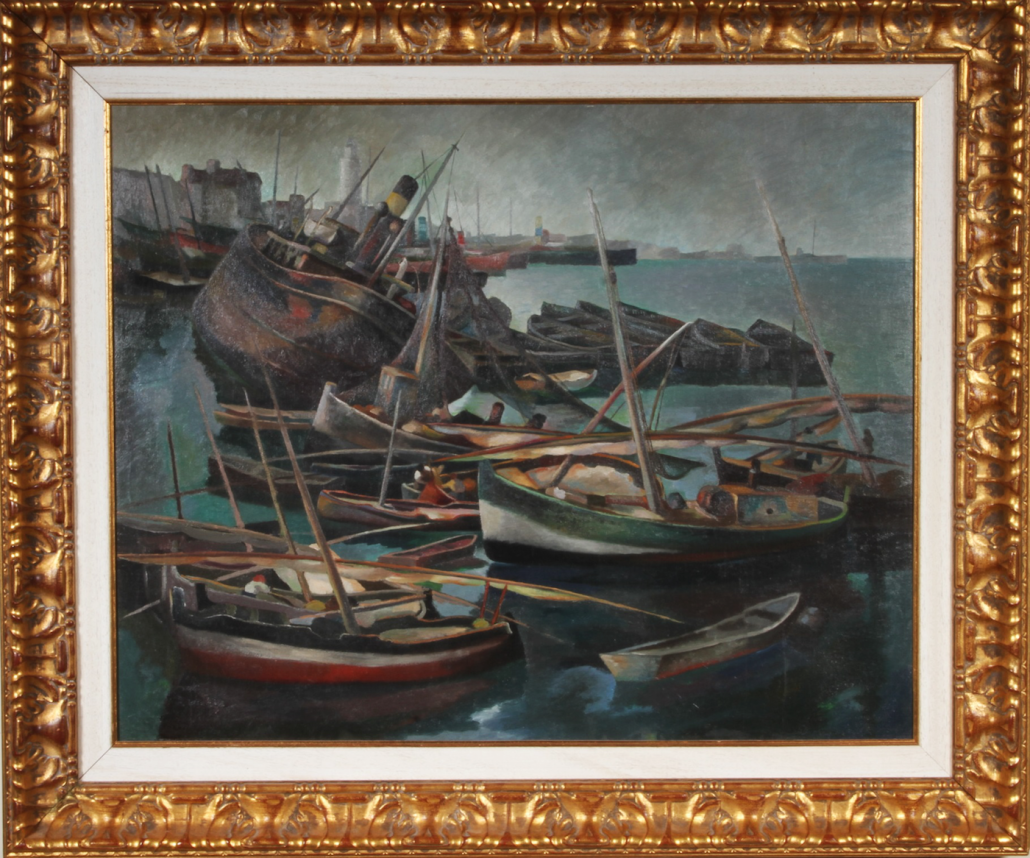 “One piece I’m really excited about is the Barcelona Harbor, said Panarese. “Although this piece (above) is unsigned, it’s arguably attributable to Wifredo Lam based upon the known provenance and other information provided by the estate. We anticipate a lot of interest in it and because it’s a great piece to place your bet upon.”