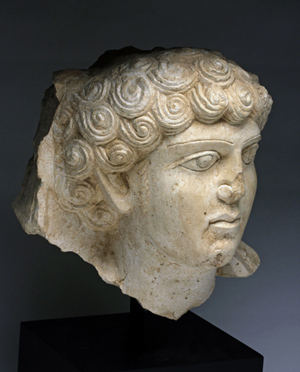 BOULDER COUNTY, Colo. – Following two stellar performances in previous Antiquities Saleroom auctions, Part III of the 30-year Pre-Columbian art collection of an Emmy Award-winning writer/director will take center stage alongside other prestigious collections of ancient art and antiquities on October 10 and 11. Antiquities Saleroom will conduct the important two-day auction as an online event, with bidding available through LiveAuctioneers.

The 500-lot auction has been divided into two sessions, each having its own focus. Day one will feature ancient art of Europe, Asia and the Middle East, with selections from a major New York collector and a number of other individual consignors. Day Two will be devoted exclusively to Pre-Columbian art from the Ancient Americas.

The October 10 session will open with stone implements and several exceptionally large, museum-quality fossils of megalodon (prehistoric shark) teeth. They will be followed by an outstanding array of Egyptian, Greek, Roman, Etruscan, Middle Eastern and Asian antiquities and ancient art, starting with Lot 23, a 700-330 BC Egyptian mummy mask. Made of linen and gesso, the funerary mask with painted, gilded face would have been placed over a mummy before burial. Estimate: $7,000-$10,000.

Lot 34, a Greek figure of a 3-inch-long horse cast in bronze and dating to the 10th-7th century BC might remind some of a primitive Giacometti. Its anatomy features long, lanky legs, tail, neck and snout, a style typical of the classic Geometric Period. With an illustrious trail of provenance, it is expected to make $10,000-$15,000.

Another Greek treasure, Lot 46, is a 5th-4th century BC Attic silver skyphos with applied silver handles. Likely a cup offered in tribute to a wealthy Greek at a temple or grave, it is delicately engraved in a floral pattern. Very rare and beautiful, it is estimated at $4,000-$6,000.

A striking Ancient Roman (1st century BC to 1st century AD) bronze Isis Aphrodite figure, 8¾ inches tall, shows an Egyptian influence that was prevalent during the “Isis cult” period. It is comes with provenance from a prominent New York City Gallery and is entered as lot 86. Estimate: $18,000-$25,000.

A marvelous object discovered in a field in Heworth, Yorkshire, England, Lot 90 is a bronze chariot fitting fashioned as a bas-relief boar’s head. With its front paws extended, the boar renders the illusion of charging forward. “This piece probably was not made in Britain; it is far more likely that it came to Britain with the Romans. A fitting this elaborately and finely crafted would have adorned the chariot of a very senior military person,” said Bob Dodge, co-founder of Antiquities Saleroom. Estimate: $6,000-$9,000.

Asked how entry-level collectors might dip their toes into the Roman artifacts market, Dodge replied, “With something like Lot 99, a terracotta antefix (roof-corner decoration) from the 1st century. They’re extremely well made and highly decorative. The Getty Museum in Malibu has a large collection of them. Usually they are carved with the heads of humans or mythological characters. The one in our sale is in the form of an upright palmette that emerges from the head of Medusa. Its estimate is $1,500-$2,000.”

Lot 108 is one of the auction’s top prizes – a Palmyran limestone relief of a man’s head, possibly a prince or other nobleman. The life-size head has finely incised features, including almond-shape eyes, a bulbous nose and “hair” sculpted in tight curls. “This is an artwork that will transport you back in time when you look at it,” said Dodge. It carries a presale estimate of $20,000-$25,000.

The October 11 session features Pre-Columbian art from the Ancient Americas and is led by Part III of an exceptional collection amassed by an Emmy Award-winning writer/director (“The Simpsons”) who is now executive producer of the NBC hit “Parks and Recreation.” A second featured collection includes important pieces with provenance from Chicago’s Adeon Gallery, a prominent establishment of the 1970s/’80s.

The latter collection was the source of several spectacular examples of Pre-Columbian stonework, including Lot 309, an Olmec jade bowl whose smooth finish might have taken months to achieve. “The Olmec people went to great lengths to quarry jade for use in creating their most treasured objects, and they didn’t have Dremels or diamond bits,” said Dodge. “They used hand tools and a laborious pecking process to work away at the stone until its finish looked smooth and polished.” The jade bowl is estimated at $8,000-$10,000; while Lot 310, an Olmec brownstone bowl, could reach $4,000-$6,000.

Also from the Adeon Gallery collection are Mezcala/Guerrero figures, 400-100 BC, known as axe gods. Crafted in various body shapes and poses, with an axe-blade shape at one end, axe gods were never meant for battle. They were “purely ceremonial, maybe tomb offerings,” said Dodge. Lot 332, a monumental 9in Mezcala anthropomorphic axe god, is cataloged with a $2,000-$3,000 estimate. Additionally, the sale includes approximately one dozen lots of Costa Rican axe gods of jade and jadeite. Lot 384 is a 7 3/8-inch-high jade axe god whose form morphs from bird to human. With provenance from private collections in France and Scottsdale, Arizona , it is estimated at $8,000-$10,000. Note: A near-identical example sold at Christie’s in 2004 for $16,730.

Several extremely desirable Mayan ceramics were consigned by the aforementioned Hollywood producer, including Lot 438, a 9¼in cylinder probably used for the consumption of cocoa. It is adorned with a band of hieroglyphs and an abstract bearded serpent of the underworld in profile. Estimate: $3,500-$5,000.

Lot 454 is a remarkable example of Zapotec art recovered many decades ago from Monte Alban in the Mexican state of Oaxaca. The large, elaborately carved urn effigy depicts a regal figure wearing a cape, ear spools and an extravagant “feathered” headdress. This rare survivor could command a top bid of $7,000-$10,000.

Another superb carving is Lot 461, a Remojadas (Veracruz, Mexico) hollow terracotta head of a young male warrior wearing a banded helmet and large, round ear disk. The lifelike visage has downcast eyes, an aquiline nose and parted lips that display the youth’s two front teeth. Ex Adeon Gallery, it is estimated at $1,200-$1,800.

The last of the featured highlights is Lot 495, a world-class Aztec obsidian core the size of a football. Mesoamericans would have shaved off thin blades from such a core for use in surgery, warfare and various domestic purposes. “Blades from obsidian are sharper than even today’s surgical-steel blades,” Dodge noted. Perhaps the largest known core of its type, the lot is estimated at $4,000-$6,000.

Antiquities Saleroom’s October 10-11 auction will commence at 11 a.m. Eastern Time on both days. Bids may be placed absentee or live via the Internet on auction day through LiveAuctioneers. 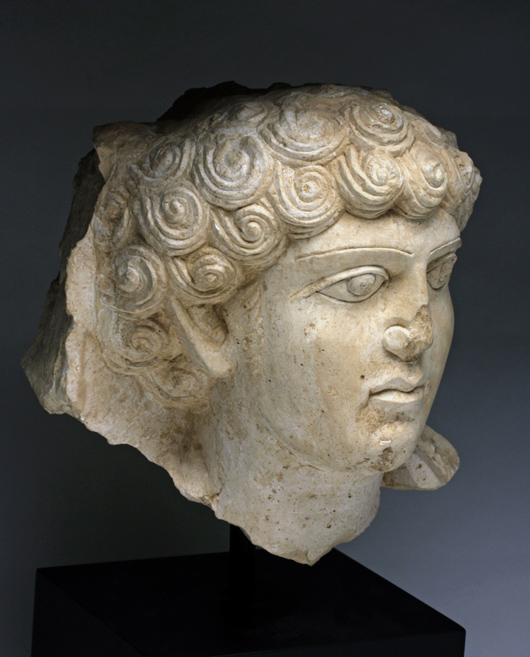 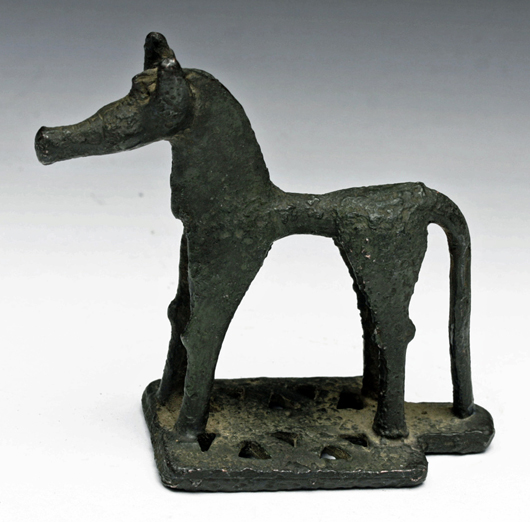 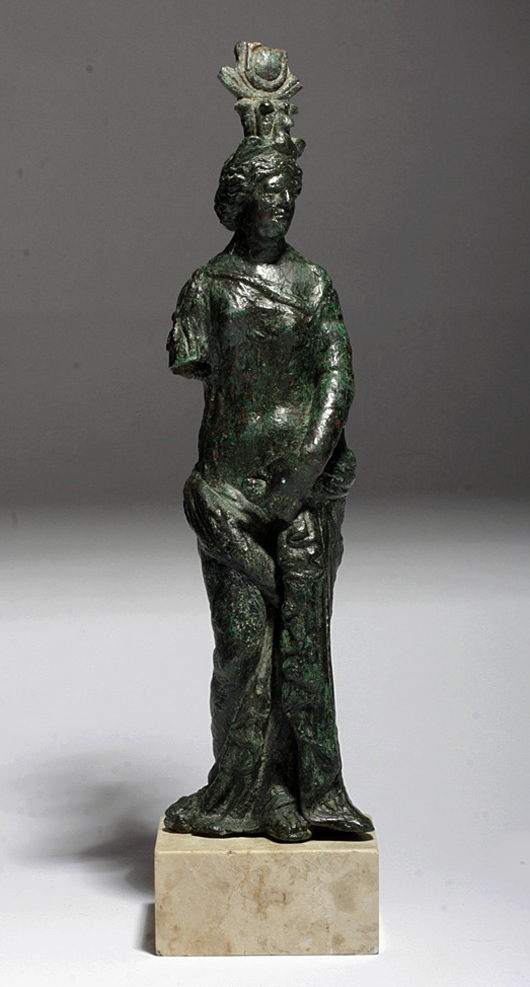 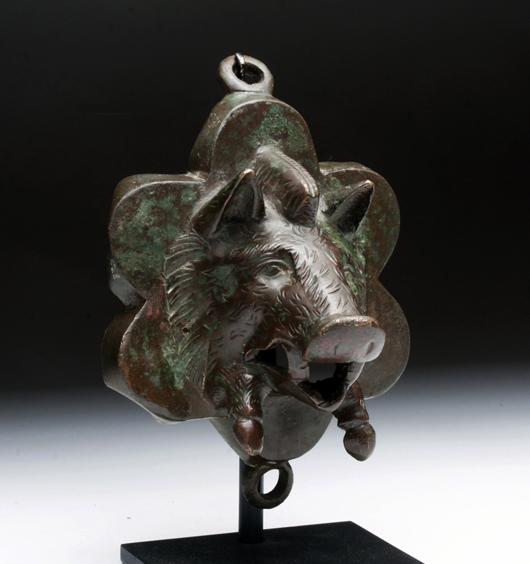 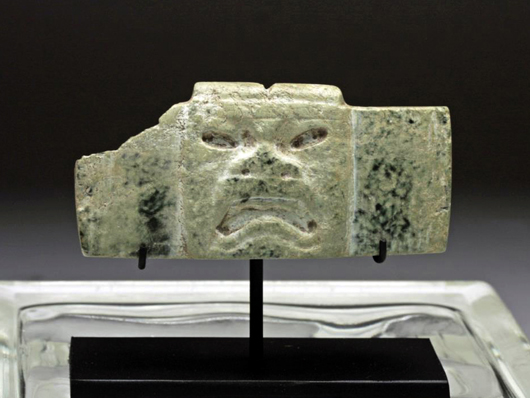 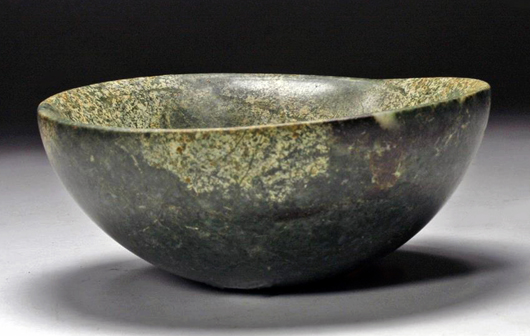 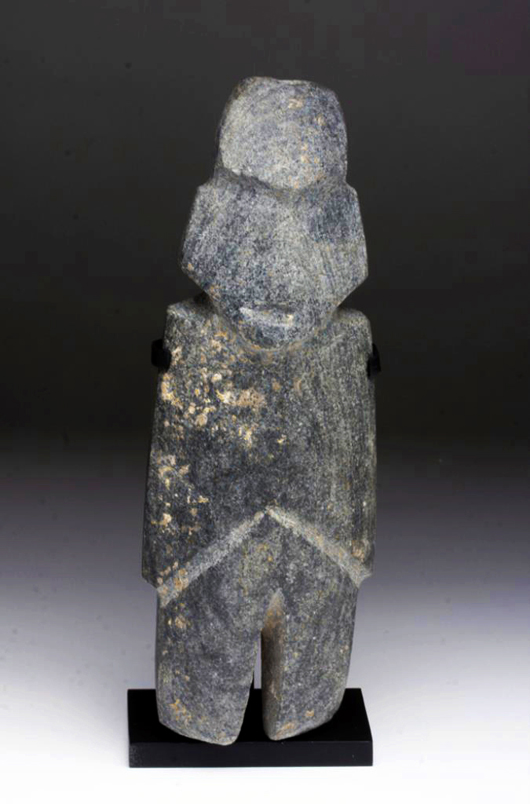 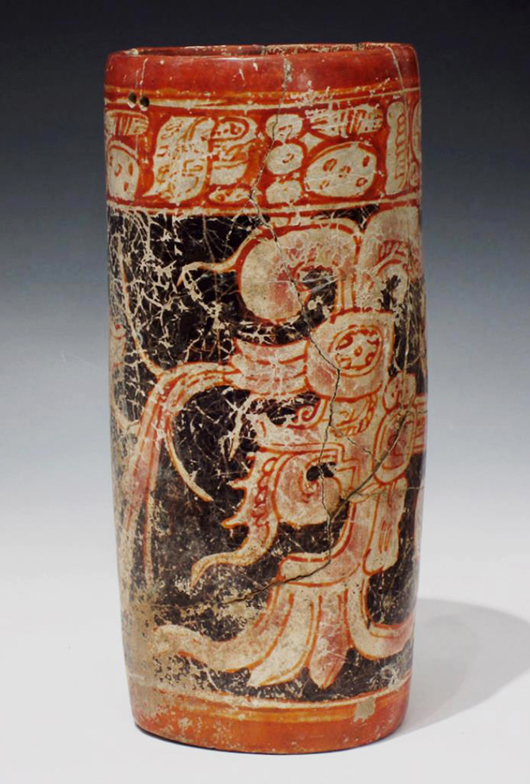 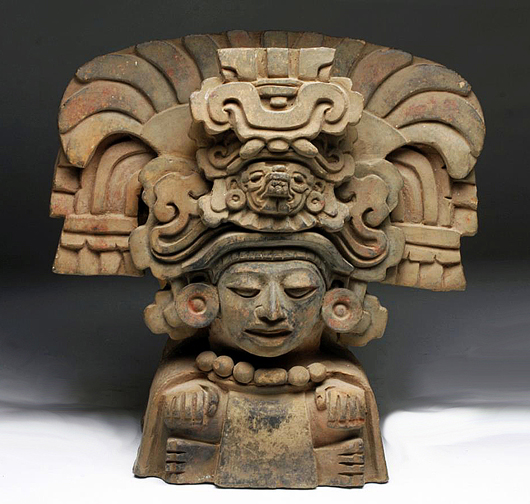