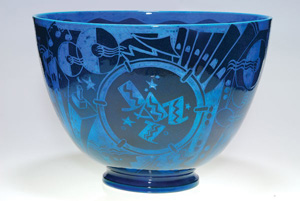 Rare and important Cowan Jazz bowl designed by Viktor Schreckengost and executed at Cowan, circa 1930. Height 12 inches tall and over 16 1/4 inches in diameter. Estimate: $40,000-$70,000. Image courtesy of Humler and Nolan.

CINCINNATI – Humler & Nolan will hold its annual auction of Rookwood pottery, American and European ceramics and art glass at its showroom, located in the Tower Place Mall, 28 W. Fourth St. in downtown Cincinnati on June 4 and 5.

Humler & Nolan, who auctioned Rookwood pottery, art glass and other ceramics for nearly 20 years at Cincinnati Art Galleries, is now an independent company, but with the same auction staff. The 1,300-lot sale will be held at their showroom at Fourth and Race streets, convenient to many attractions, restaurants and hotels.

Saturday, June 4, begins with the Keramics section. Some excellent examples of Weller pottery will be presented, including a Hudson vase colorfully decorated with a peacock by Mae Timberlake (est. $4,000-$6,000). Also charming is a Dancing Frogs lawn ornament, estimated at $7,000-$9,000, so the high bidder probably won’t display this happy pair on his lawn.

A large group of Cowan pottery pieces, most from a single collector couple, will prove interesting. A large Jazz Bowl, an Art Deco icon, is predicted to sell for between $50,000 and $70,000. The first of these was ordered by Eleanor Roosevelt for her husband, and the small number of subsequent examples are all individually decorated and unique. A pair of Gothic Monk bookends, with a brown crystalline glaze, is scarce and appealing (est. $1,500-$2,000). Selections from other potteries – George Ohr, Fulper, Newcomb, University of North Dakota, Saturday Evening Girls, Tiffany and Doulton – will also be offered.

On Saturday afternoon, the art glass portion begins with a nice variety of works from accomplished artisans, including Steuben, Galle, Tiffany, Lotton, Labino, Daum Nancy, Lalique, Loetz, English cameo and Orientalia. A Galle cameo vase featuring a small hamlet abounds with charm (est. $3,500-$4,000) as does a scenic vase with two rowboats (est. $2,500-$3,000). Also interesting is a Loetz vase ensconced in an Art Nouveau-style pewter mount, estimated at $900-$1,200. Quite striking is a Tiffany Lily Pad bowl replete with vines and leaves and estimated at $2,000-$3,000.

A new entry in the sale is a group of World War II era posters from the collection of Vernon Rader. The Cincinnati Enquirer and USA Today recently profiled Rader and his posters in an article by Cliff Radel.

Sunday, June 5, brings over 400 lots of Cincinnati’s own Rookwood Pottery. Gracing the cover of the printed catalog is a 17 1/2-inch-tall decorated porcelain vase, crafted by John Dee Wareham in 1924. Wareham encircled the vessel with lush grapes, vines and leaves against a mottled maroon ground (est. $8,000-$10,000).

A rare French Red vase decorated with incising and painting by the creative Sara Sax displays detailed carving and lavish use of color and is estimated at $8,000-$10,000. A standard-glaze vase with a full-length portrait of a Native American member of the Ute tribe, by Grace Young, is estimated at $20,000-$25,000, while a portrait of a Maori mother and child of New Zealand is predicted to bring $2,000-$3,000.

Another standard-glaze vase, with a trio of barn swallows and having sterling silver overlay by Gorham, displays great detail and color use ($4.000-$5.000). Carrying the same estimate is a vase attributed to Jens Jensen featuring Pablo Picassoesque faces and having descended in the family of one of the Rookwood Pottery’s last owners. Spectacular describes a sea-green vase decorated with five white geese flying around the shoulder. Decorated by Amelia Sprague in 1899, it is estimated at $9,000-$12,000. A wide variety of styles, glazes and estimates are available in the generous selection of Rookwood. 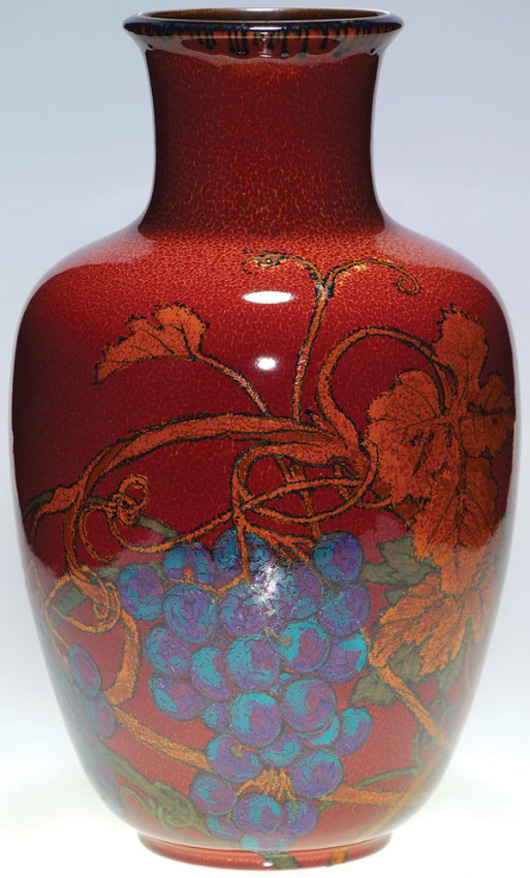 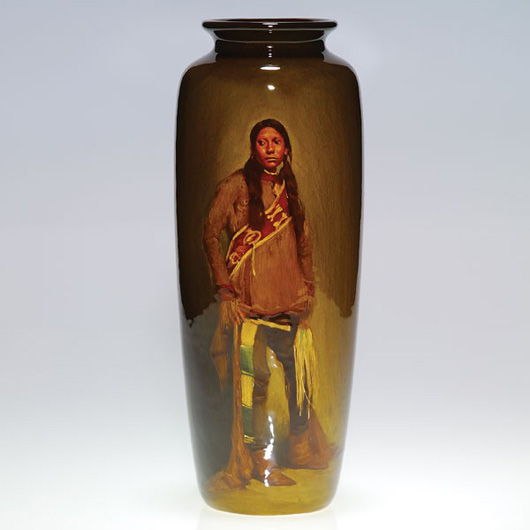 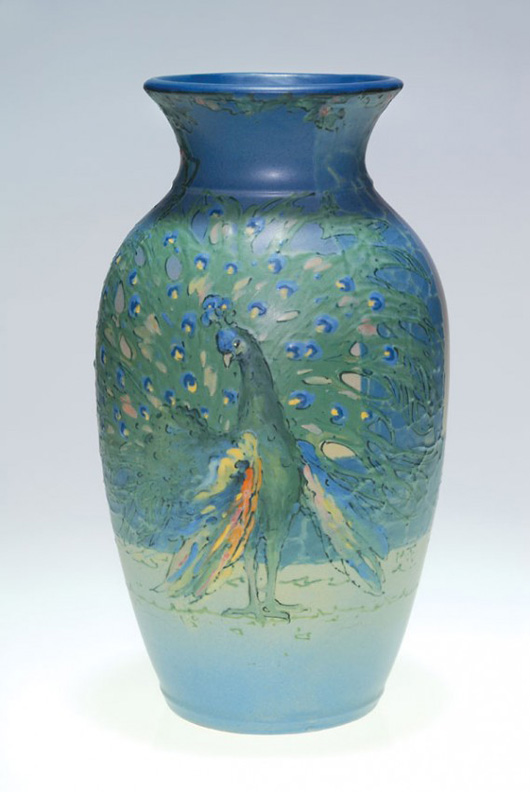 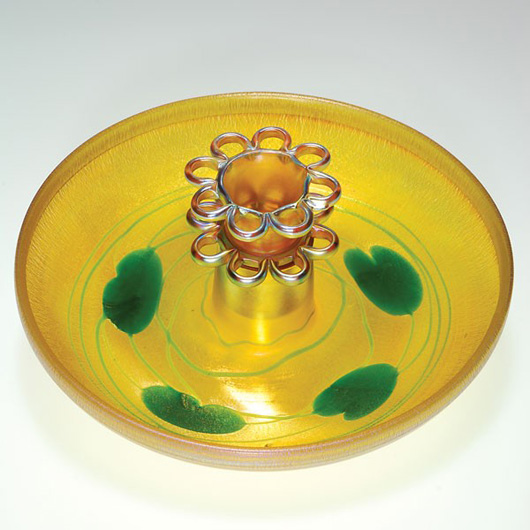 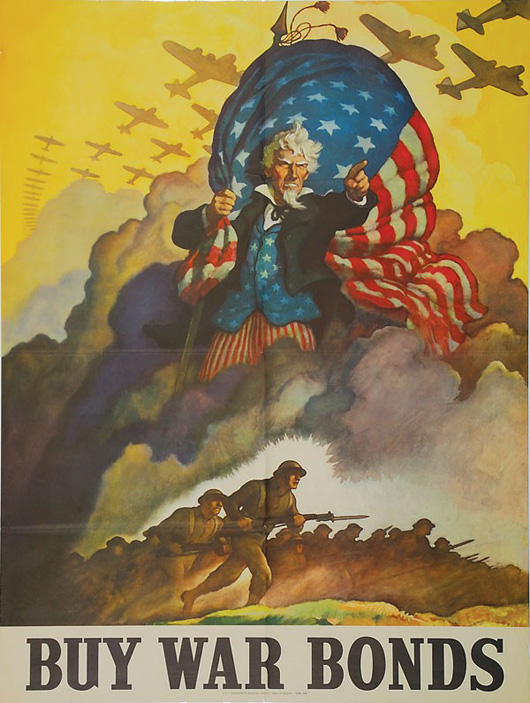 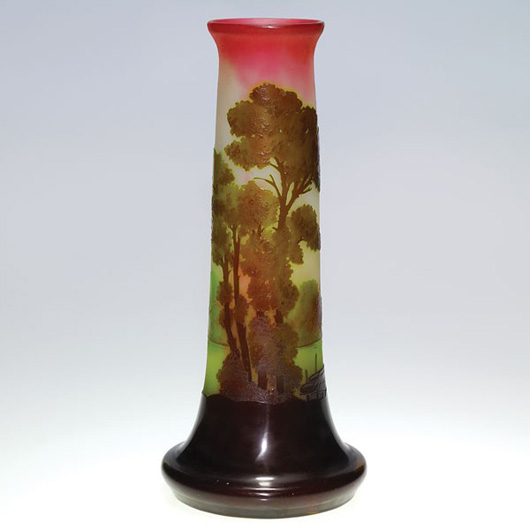 Galle four-color cameo vase, 14 inches tall, with logo that reads ‘Fabrication Francaise’ and the Cross of Lorraine acid pressed beneath the base. Estimate: $2,500-$3,000. Image courtesy of Humler and Nolan.

Specialists of the South to facilitate downsizing effort June 11