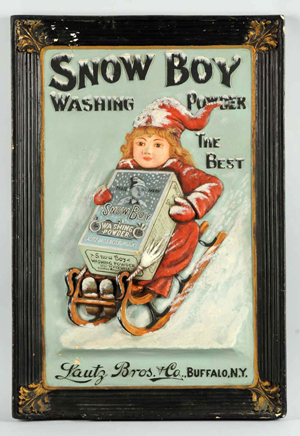 DENVER, Pa. – Riding on the wake of a buoyant million-dollar advertising sale in February, Morphy’s is gearing up for another wide-ranging advertising auction, with the added bonus of Part II of the David Silverman pinball collection. The April 26-27 event will feature 1,660 choice lots of antique advertising, coin-ops and figural cast-iron pieces. Internet live bidding will be available thrugh LiveAuctioneers.

Day one will open with a selection of more than 600 lots of soda pop signs and related items. Both an extremely rare 1930s Dr. Pepper porcelain triangle truck sign and a 1936 Orange Crush embossed tin sign are entered with individual estimates of $2,500-$3,500. Another scarce Orange Crush sign, made of tin over cardboard, is expected to make $3,000-$4,000. Although sampling the contents is not advisable, an extremely rare, unopened 6-pack of Dr. Pepper cone-top cans could rise to the $3,500-$5,000 range.

A 40-year single-owner collection of more than 100 early syrup dispensers features many seldom-seen types – among them, one of very few known examples of a Fan-Taz 5-cent “DRINK of the FANS” dispenser in the form of a realistically “stitched” baseball with bat motif. Made around 1900 and retaining its original pump, it carries a $30,000-$60,000 estimate.

Other top syrup dispensers include: Chero Crush, $20,000-$30,000; Cherry Chic, $12,000-$18,000; and World Liquid Force, which is shaped as a globe of the world with bas-relief continents, $14,000-$25,000. Morphy Auctions’ founder and president, Dan Morphy, noted that there are many other dispensers whose estimates are well within reach of beginning and intermediate collectors. “It’s a really beautiful collection with impressive examples at every price point. They’ve been on display here at the gallery and the compliments have been constant,” Morphy said.

Moving into the Coca-Cola category, the highest-estimated lot at $10,000-$15,000 is a large, 1930s stainless steel and neon outdoor sign made by Flexlume Electrical Advertising Co., of Buffalo, New York. Other desirable Coke signage includes a 1931 cardboard cutout easel sign with the image of a bathing beauty with sunburst parasol, $3,000-$5,000; and a 1935 shield-shape porcelain Fountain Service sign, $2,500-$3,500. From the late 19th century, an extremely rare “Hutchinson-style” bottle, with a straight-sided as opposed to cabriole shape, will be offered with a $2,500-$4,500 estimate.

The Saturday session will wrap with more than 150 lots of tobacciana. One of few known examples of a Sweet Violet Tobacco vertical pocket tin is estimated at $1,000-$2,000. A Mayo’s Plug “Cock o’ the Walk” porcelain sign features an appealing image of a crowing cockerel, while a Buster Brown cigar tin displays an amusing image of comic strip character Buster Brown and his trusty bull terrier Tighe. Each of the two lots is estimated at $2,000-$3,000.

Bidders will want to reserve as much pocket change as possible for the 200+ lots of gambling machines and coin-ops that follow. The highest-estimated item in the auction, at $100,000-$120,000, is a superb Caille double-upright floor model slot machine that combines a 5-cent Centaur and 25-cent Big Six in its gold-plated oak casing. Another handsome upright model, a Mills “Two Bits Dewey Jackpot” upright slot machine, is estimated at $25,000-$30,000. Among the most desirable snack-vending machines are a Ryede Gum, Peanut and Candy dispenser, $12,000-$15,000; and a circa-1899 Wrigley’s Gum slot machine/trade stimulator that was given to retailers if they ordered ten cases of gum, $2,500-$4,000. 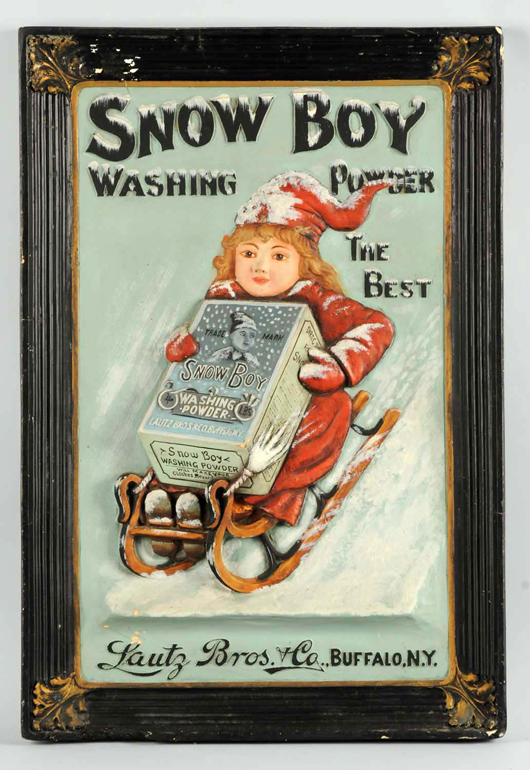 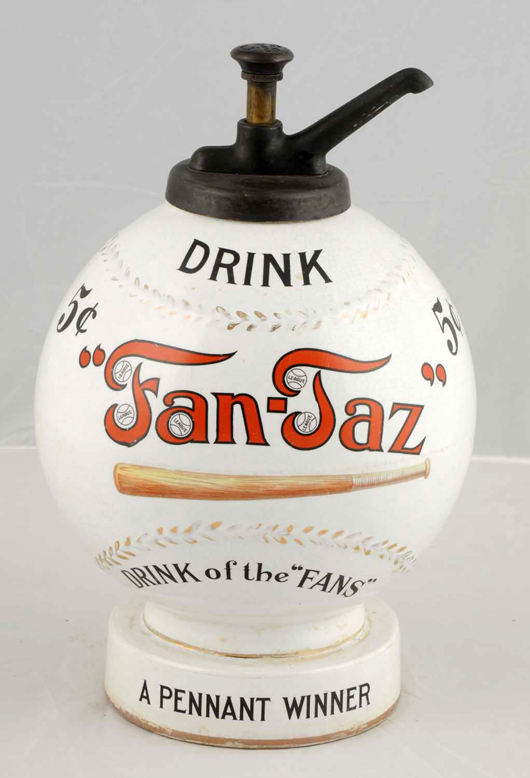 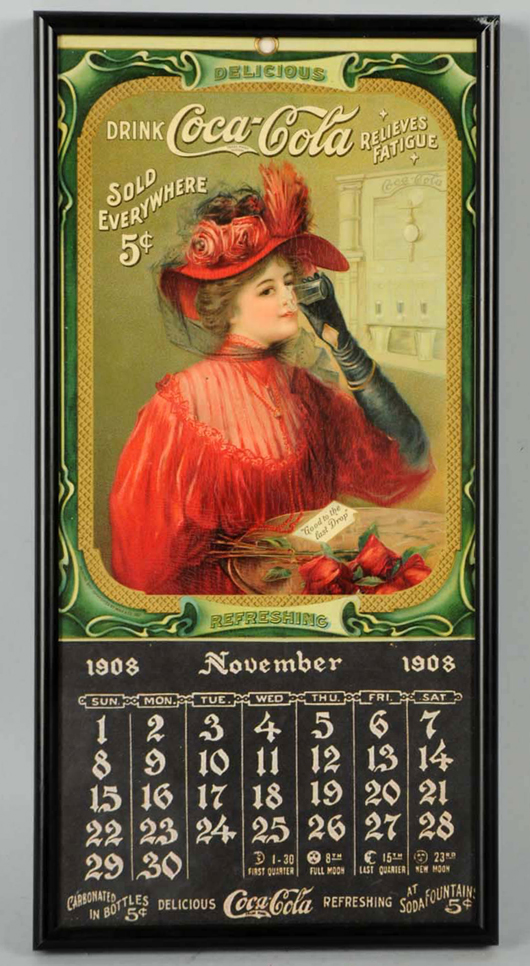 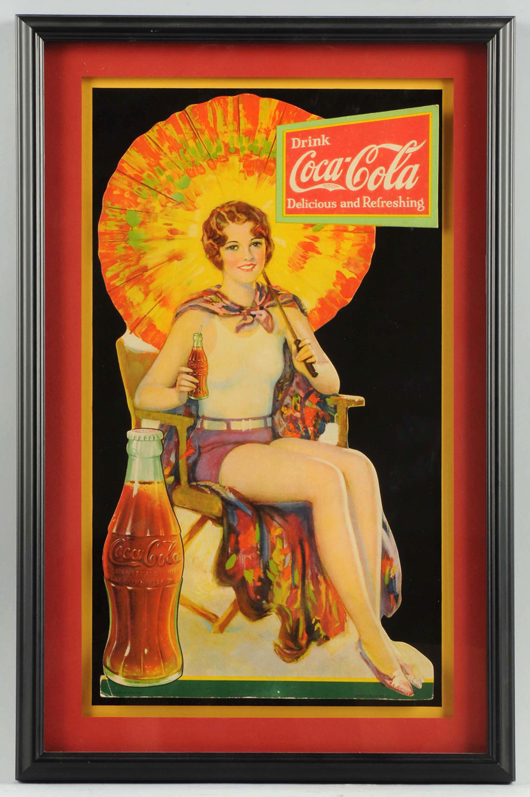 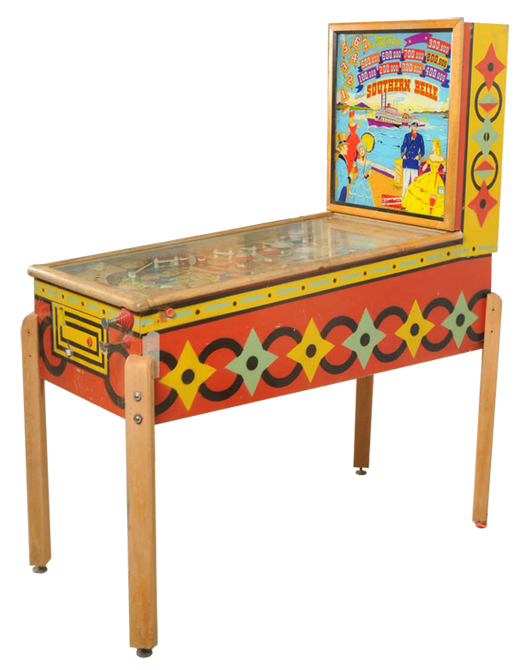 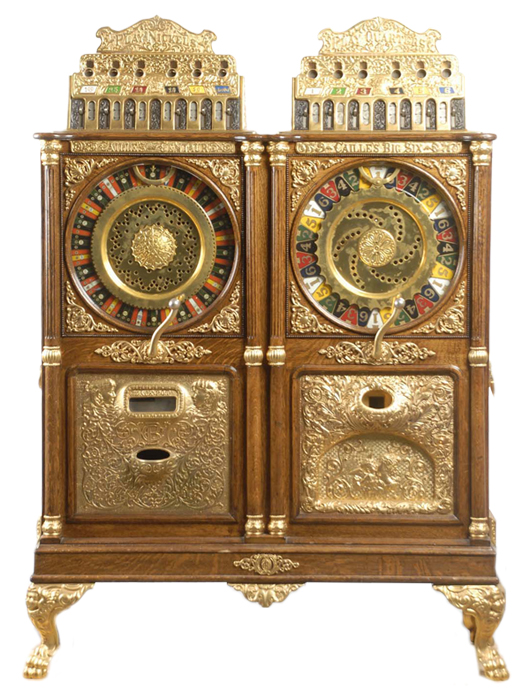 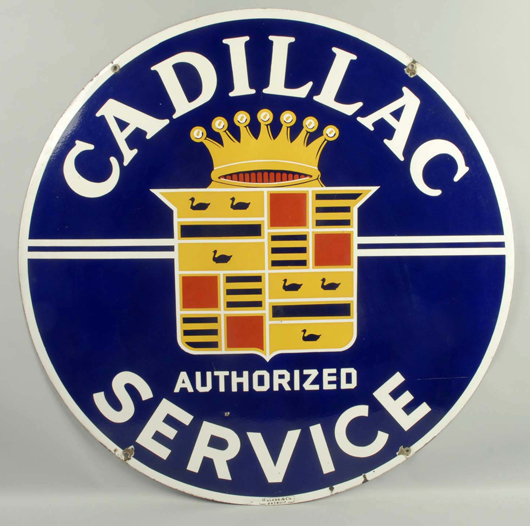 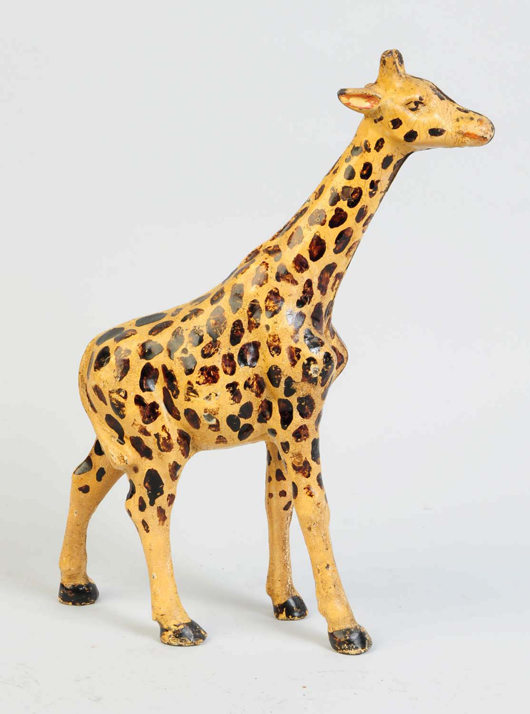