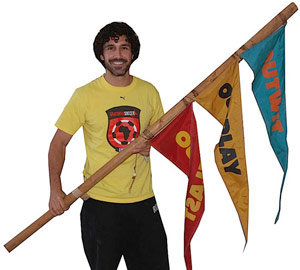 SPEONK, N.Y. – A collection of iconic objects used during the taping of the CBS Television reality series Survivor is a featured attraction in Grey Flannel Auctions’ live sale of coin-ops, antique advertising, toys and entertainment memorabilia to be held Dec. 14 in Speonk, N.Y. Absentee and live Internet bidding through LiveAuctioneers.com will also be available.

The Survivor collection was started after the series’ third season, when producer Mark Burnett donated props from the show’s taping in Africa to the Elizabeth Glaser Pediatric AIDS Foundation. The props were sent to auction, where the consignor bought the pieces that formed the core of his collection. He acquired additional items from later charity auctions containing donations of Survivor objects from Burnett, as well as private-treaty sales with people who worked on the show’s production crews.

As part of his research in documenting the collection’s contents, the consignor reviewed Survivor footage and made close-up comparisons to photos on CBS Television’s Web site. From torches to flags, tribal council stools to Thai lion sentinels, all of the Survivor props will be immediately recognizable to the legion of viewers who have followed the ground-breaking series since its beginning. All items from the third-season Survivor: Africa episodes come with certificates of authenticity signed by Ethan Zohn, the former professional soccer player and million-dollar winner of that particular season’s competition. Zohn personally inspected and vouched for all objects in the sale that came from the episodes shot in Africa. Zohn’s AIDS-related charity, Grassroot Soccer, and the Elizabeth Glaser Pediatric AIDS Foundation are two of the beneficiaries that will share proceeds from the Survivor section of the sale.

The auction also features many unusual entries that fall under the category of “Unique Antique Amusements,” which is the sale’s official title. Coney Island items include an actual car from the ride known as The Whip, a turnstile, and a completely restored cast-iron parking meter. A fully laid-out 1940s casino roulette table with wheel, and a genuine craps table are symbolic of Nevada’s heydays, while a framed, personally autographed print portrait of the original Mr. Las Vegas, Elvis Presley, bears a lengthy, authenticated hand-written inscription from the entertainer to the March of Dimes.

Coveted early coin-ops run the gamut of categories, with fortunetellers, a “Love Analyzer,” Selector-Scope and Mutoscopes among them. Additionally, there are cranes, pinball machines, a Seeburg jukebox, razor blade and postage stamp dispensers, and even a 1930s 1-cent foot massager.

A sizable selection of circus and carnival material features vintage Ringling Brothers posters, a Hunt’s Circus bass drum, oversize clown shoes and a bright red Mills Circus clowns’ chariot. There’s more fun to be had with the automata in the sale, which include a “Scary Zombie,” acrobat clown and blond Mod girl.

Other novelties include a Fire Chief pedal car kiddie barber chair, an old Western Electric coin phone booth with bi-fold doors, a bound copy of Grateful Dead Comix signed by Jerry Garcia, and the actual costumes worn by the Brady Bunch in the talent-show scene of The Brady Bunch Movie. Of great historical importance is a gauge found in the rubble after the tragic 1937 crash of the Airship Hindenburg at Lakehurst Naval Air Station in New Jersey. The German-made gauge, which came from the Hindenburg’s cockpit, is mounted on a plaque with an inscription: From The Hindenburg, May 6, 1937, Lakehurst, New Jersey.

“Every lot in the sale is interesting and unusual,” said Grey Flannel’s president, Richard E. Russek. “This auction, which is located at the gateway to the Hamptons, will be a great way to enjoy a Sunday afternoon, meet our staff and make new friends.” 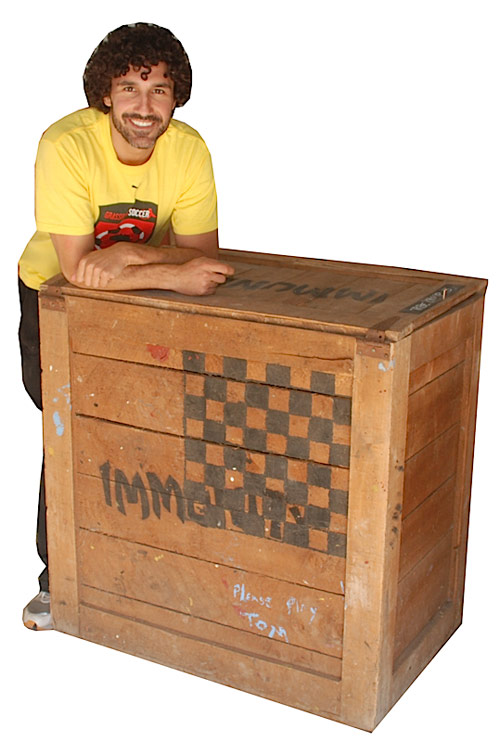 Ethan Zohn, million-dollar winner of Survivor: Africa, authenticated all auction items from the third season of the long-running reality show. Zohn autographed the 25-inch by 36-inch wood crate seen here, which was prominent in multiple episodes of the series. Introduced during the third season, it played a key role in the show’s immunity challenge. Image courtesy Grey Flannel Auctions. 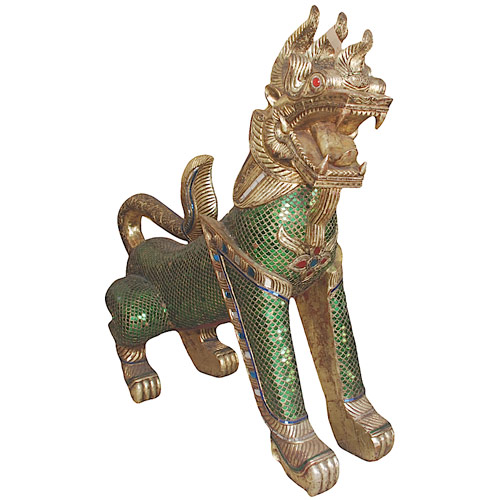 This is one of a pair of magnificent 5½-ft.-tall lion sentinels that guarded the entrance to Survivor Thailand’s tribal council area. Seen weekly in that season’s opening credits, its gilded appearance is beautifully enhanced with a multitude of brightly colored mirror fragments. Each figure will be auctioned with a $600-$800 estimate. Image courtesy Grey Flannel Auctions. 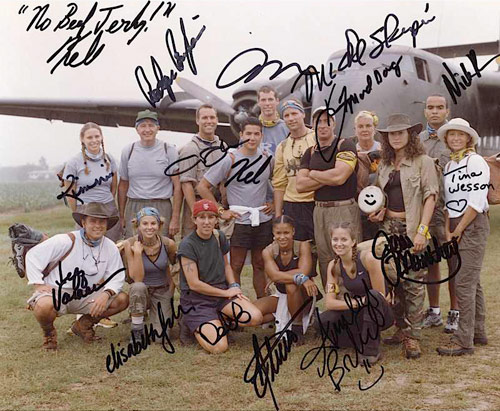 This color photograph was autographed by all 16 participants of the Survivor: Australia season. Estimate: $300-$400. Image courtesy Grey Flannel Auctions. 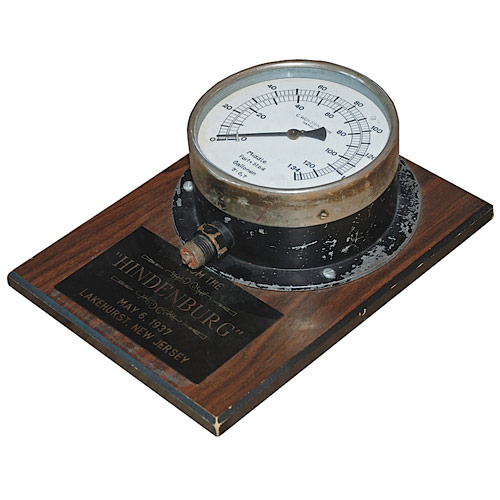 This German-made cockpit gauge was found in the rubble after the tragic 1937 crash of the Airship Hindenburg at Lakehurst Naval Air Station in New Jersey. It is mounted on a plaque with an inscription: From The Hindenburg, May 6, 1937, Lakehurst, New Jersey. Estimate: $1,000-$1,500. Image courtesy Grey Flannel Auctions. 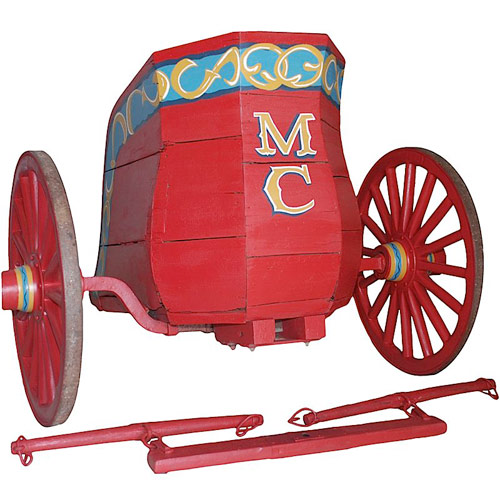 A unique and well-constructed turn of the 20th century piece, this chariot that probably transported clowns was made to be pulled by a pair of horses. The artwork is original, and “MC” insignia represents Mills Circus. Estimate: $500-$750. Image courtesy Grey Flannel Auctions. 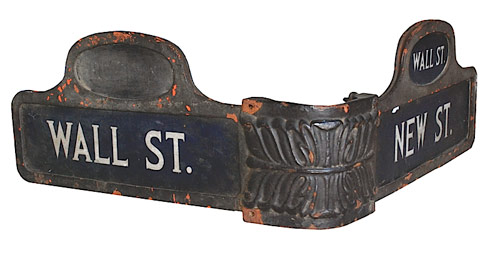 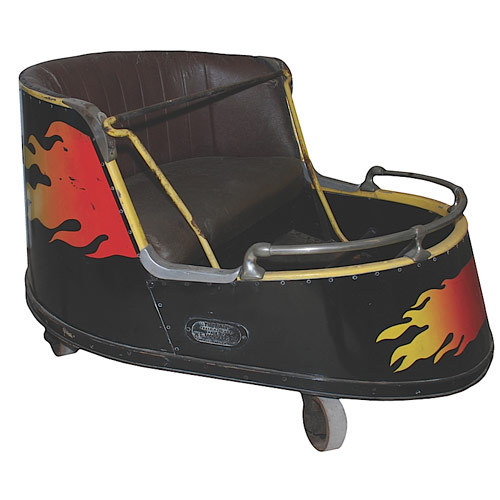 Marketed by Buddy L in very limited quantity in 1935-1936, the Burlington Zephyr train could be pulled by its handle with a child sitting atop the engine, or the youngster could propel forward using foot power. A classic Art Deco toy, it is estimated at $2,000-$3,000. Image courtesy Grey Flannel Auctions. 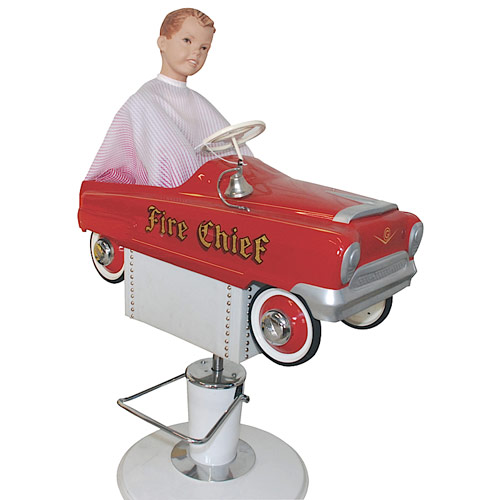 Produced by Williams, this 2-cent Selector Scope Fortune Teller gave men a choice of five questions to ask, such as, What are my lucky numbers? Women might ask, Am I the romantic type? The gypsy fortuneteller responds with an answer that lights up on the screen. Estimate: $750-$1,000. Image courtesy Grey Flannel Auctions.

Galleries wonder whether Art Basel will draw buyers this year