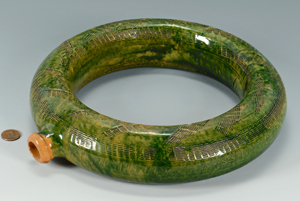 This rare Tennessee ring jug is the most elaborately decorated Southern example of the form found to date, and was made by Civil War era potter Christopher Haun. Est. $16,000-$18,000. Case Antiques image

KNOXVILLE, Tenn.— An exceptionally rare Southern pottery ring bottle discovered at a local appraisal fair leads a lineup of more than 800 lots of fine art and antiques at the Summer Case Antiques Auction, set for July 19 at the company’s gallery in Knoxville. Internet live bidding will be available through LiveAuctioneers.


The copper oxide and lead glazed earthenware bottle was made in the shape of a ring, which allowed it to hang easily from a saddle. Although a utilitarian form, company president John Case said it is the most elaborately decorated Southern ring bottle discovered to date, and the only such known form by Tennessee potter Christopher Haun. Haun is remembered not only as an excellent potter, but also for his role in Civil War history: he was part of a group of Union sympathizers executed for burning the Confederate-controlled Lick Creek Bridge in Greene County, Tennessee, in 1861. Haun’s pottery is highly sought after by collectors, and this ring jug is estimated at $16,000-$18,000. Pottery is a specialty at Case, so auction-goers can expect to find other examples of antique Tennessee, North Carolina, Georgia and Midwestern pottery in the sale.

Fine Art constitutes the largest category in the auction. American paintings include an oil on canvas marine scene by influential artist Albert Pinkham Ryder (1847-1917), originally owned by sculptor Henry Augustus Lukeman (1872-1935); it is accompanied by extensive provenance documentation and a radiography report and estimated at $30,0000-$40,000. A bronze sculpture, “The Star,” by American female sculptor Harriet Frishmuth (1880-1980), fresh from a Tennessee estate, is expected to be another key lot, along with a sharecropping scene by William Aiken Walker (1839-1921), and an original drawing by French Impressionist master Camille Pisarro (1830-1903), depicting the artist’s mother. A still life by Ralph Wormeley Curtis (1854-1922), harbor scene by Hayley Lever (1876-1958), landscape by Carroll Thayer Berry (1886-1978), 3 pencil drawings by Alfred Hutty (1877-1954), and duck hunting scene by Aiden L. Ripley (1896-1969) are also featured. Western art includes a Harry Jackson (1924-1911) bronze figure of John Wayne, works by Howard Rogers (b. 1932), Lowell Ellsworth Smith (b. 1924) and Gerald Farm (b. 1935), and 2 cowboy paintings by Carl Hantman (b. 1935), one of which was used as the cover illustration for a Western novel. Art and Military collectors alike are expected to compete for a 19th century portrait of Confederate General Robert E. Lee by Cornelius Hankins (1863-1946) and a William Cary (1840-1922) painting of Teddy Roosevelt and his Rough Riders storming San Juan Hill.

The sale also features a larger-than-usual selection of 20th century art from the Nashville collection of Stephen and Lisa Steiner Small, many of it by Southern artists: a trompe l’oeil “Punch and Judy” scene and a “Humpty Dumpty” scene by Werner Wildner (1925-2004), a Circus Parade scene by Kentucky memory painter Helen LaFrance (b. 1919), an abstract by Kentucky artist Henry Faulkner (1924-1981), and two works by Noel Rockmore (1928-1995; an urban landscape and a portrait of two New Orleans Preservation Hall jazz musicians). The collection also includes a folk art landscape by Charles Wysocki (1929-2002), and surrealist works by Carlo Canevari (1922-1996), John Foote (1921-1968) and Aaron Bohrod (1907-1992).

European paintings in the auction include Paris views by Jules Rene Herve (1887-1981) and Antoine Blanchard (1910-1988), a large oil of a little girl with her doll by Edmund Adler Rode (1876-1965), a 16th century Italian portrait after Antonio Maria Crespi (Il Bustino), a large Battle of Waterloo scene by Charles Hoffbauer (1875-1957) and a pair of 19th century “nature morte” game still lifes by English painter George Morland (1763-1804). A collection of Salvador Dali works including a gold sculpture “Christ of St. John on the Cross,” 2 bas relief silver plaques “Lincoln in Dalivision” and “Last Supper”, and a tapestry, “Battle Round a Dandelion”, all with authentication, plus serigraphs by Robert Rauschenberg and Andy Warhol and 2 lithographs by Joan Miro, round out the art highlights.

“This is Case’s largest offering to date of mid-century modern material, not just art but also furniture and accessories,” pointed out Sarah Drury, Case’s Vice President for Fine and Decorative Arts, adding that demand for 20th century items is increasing as well. Among the expected highlights is a “Frenchman’s Cove” cherry dining table made by George Nakashima in1968 for NASA research pilot Philip Brown of Atlanta. There are also 3 tables by Philip and Kelvin Laverne, Knoll and Eames chairs, midcentury posters, a collection of Bjorn Wiinblad ceramics (including a life size figural sculpture) and 20th century art glass by Lalique, David Hutchthausen, and Charles Lotton.

Adding sparkle to the sale is a 5.06 carat diamond ring with full GIA report, estimated at $30,000-$40,000. The oldest piece of jewelry in the sale is an 18K gold ring by William Fearn of London, dating from 1835, but other periods are represented as well. There are several Art Deco brooches and a 1.65 carat diamond and sapphire ring, a 3-stone mine cut diamond ring, and even a rare 19th century jeweler’s lathe. A vintage Patek Philippe pocketwatch and other vintage wristwatches, groups of jewelry by John Hardy and David Yurman, Southwestern and sterling jewelry, and a good selection of vintage costume and bakelite jewelry, are also for sale.

Civil War material and historic documents are an increasingly important category at Case. This auction includes an archive of letters related to the Tennessee 8th Infantry with graphic descriptions of the war’s toll, photographs including a half-plate tintype showing a cannon and several soldiers from the Keystone Battery of Pennsylvania, along with a collection of Civil War battle maps issued in the 1870s, and an 1809 map of Virginia by Samuel Lewis. Other interesting ephemera includes documents signed by Patrick Henry, Andrew Jackson, James K. Polk, John F. Kennedy, John Sevier, and Mark Twain, and a land grant signed by Sam Houston two days before he officially became Tennessee’s governor. There are also about two dozen historic firearms in the sale, including a Civil War brass frame revolver (possibly Griswold), 9 Colt Army, Navy and pocket revolvers, and a Sharps Model 1859 Carbine.

A stunning 6-piece coin silver tea service made by Charles Burnett, a leading silversmith of Alexandria, Virginia, is one of nine silver tea services in the auction. There is also a New York coin silver tea service by John and James Cox, an 18th century Boston tankard by William Simpkins, and coin silver from Tennessee, Kentucky and South Carolina (mulberry pattern). A large collection of sterling hollowware by S. Kirk and Sons and Steiff in the Repousse and Baltimore rose pattern includes a tea service, candlesticks, and various bowls, plus 3 flatware services in those popular patterns. Also offered are flatware and hollowware from other American makers such as Gorham and Wallace, and a large Kirk Castle pattern centerpiece.

Tennessee’s Milligan College selected Case to sell several Chinese items they are deaccessioning, among them a Qing Civil Officer’s Surcoat and leggings and a silk robe with undergarments and a rare Manchu official’s winter hat. Other Asian arts items in the sale include a rare large Chinese export Hawthorne bowl, Famille Rose jars, plaques and bowls, a collection of Imari and Canton porcelain, and white and green jade carved objects.

Other notable offerings are a rare Tennessee needlework house sampler, a pair of hand carved black ventriloquist’s dummies once used in a Tennessee traveling minstrel show, a collection of Bohemian/Moser glass, a Federal carved work table attributed to Salem, Mass., a brass ship’s wheel from the USS Yosemite, ship lanterns and other nautical collectibles, and oriental rugs. 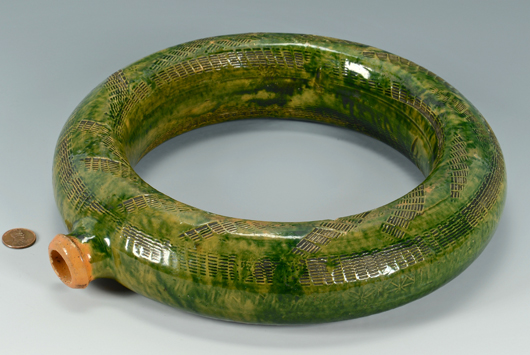 This rare Tennessee ring jug is the most elaborately decorated Southern example of the form found to date, and was made by Civil War era potter Christopher Haun. Est. $16,000-$18,000. Case Antiques image 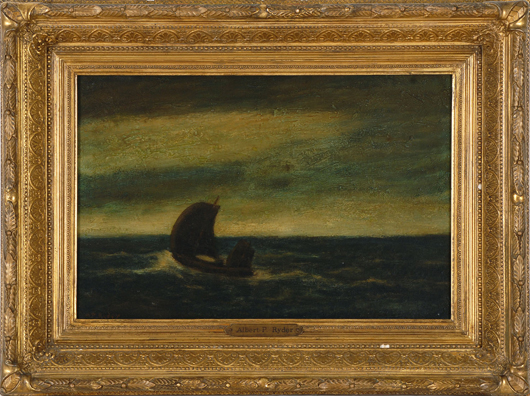 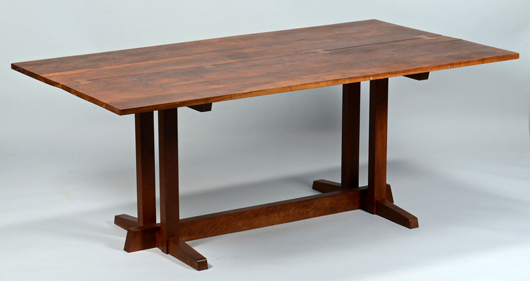 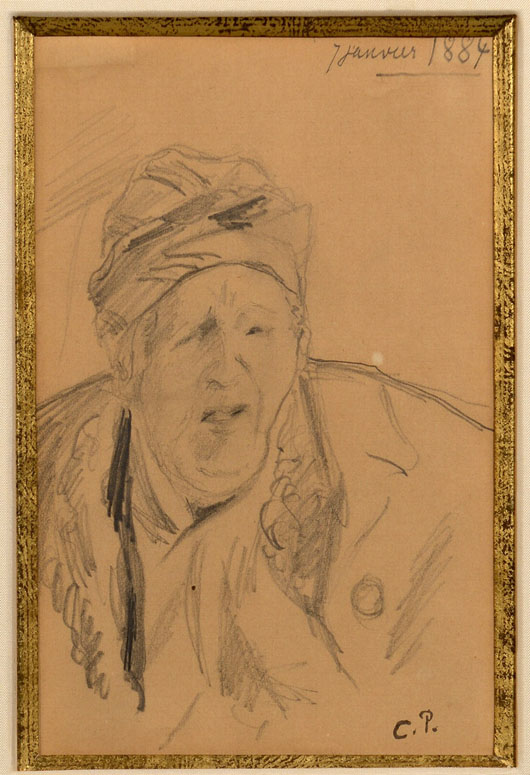 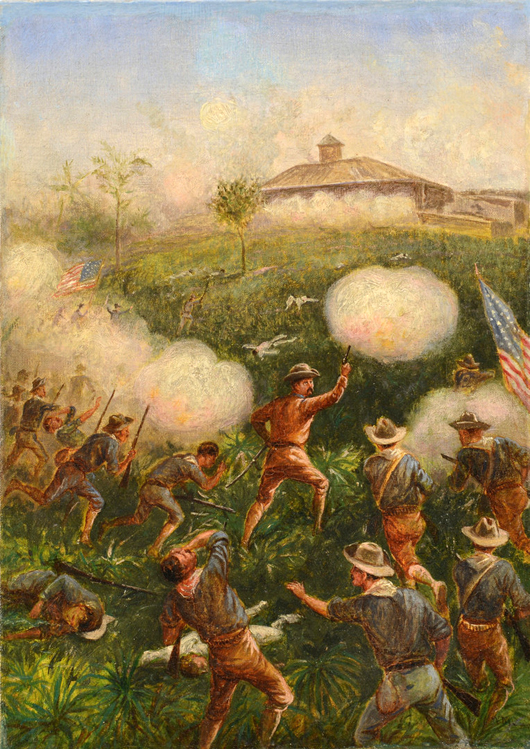