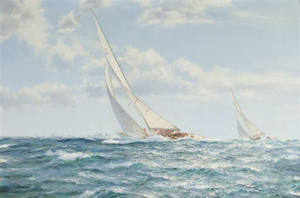 CLEVELAND – Gray’s Auctioneers will conduct their Fine Art, Antiques and Decorative Arts Auction, on Wednesday, May 15, 2013. The auction features an eclectic array of art objects from across the globe, including African masks, Chinese jade, Persian rugs and German bisque dolls, as well as an impressive collection of paintings spanning the breadth of art historical periods and styles.

One of the most important artworks included in the auction is Lot 29, a painting by notable British painter, Montague Dawson. The subject of Dawson’s image is the fiercely contested final race between two great sea yachts, Australia’s Gretel and the United States’ Weatherly, in the last round of the 1962 America’s Cup. Dawson is well known for his work as a maritime painter and his expertise is evident in this beautiful rendering of the two graceful ships. President and Mrs. John F. Kennedy were famously in attendance at this historic race, the first time an Australian vessel had qualified for the final. In the end, it was America’s Weatherly that took the top prize.

Another stunning canvas featured in Gray’s May 15 auction is Lot 54, The Seamstresses, painted in 1954 by famed African-American artist and master of the Harlem Renaissance, Jacob Lawrence. Lawrence gained national acclaim as a painter while still a young man in his 20s when a portion of his work from the Migrations Series, a suite of paintings depicting the early 20th-century passage of African-Americans from the Deep South to the urban North, was featured in a 1941 issue of Fortune Magazine. His paintings illuminate the black and working-class experience in the United States and he is recognized among the greats of African-American artists alongside Augusta Savage and Romare Bearden. The New York Times has called Lawrence “one of America’s leading modern figurative painters” and “among the most impassioned visual chroniclers of the African-American experience.”

Fine examples of work from the contemporary art world include Lot 89, a Damien Hirst low edition original Lambda print on gloss Fuji archival paper titled Opium, from the artist’s Spot Series, and Lot 146, a 1991 cast and sandblasted glass sculpture with acid polish called Untitled (Blue) from the artist Steven Weinberg, whose works are in the collections of the Musee Des Artes Decoratifs at Palais du Louvre in Paris, the Metropolitan Museum of Art in New York, the Victoria and Albert Museum in London, and the Smithsonian Institute in Washington, D.C. Notable fine art photographers Ruth Bernhard and Harry Callahan are also represented in the auction with two gelatin silver prints, Skull with Rosary and Chicago Loop – Lots 80 and 81, respectively.

In addition to this stellar collection of paintings and sculpture, the May 15 auction also features a spectacular collection on non-Western art objects, such as Lot 229, a Thai green celadon Kendi, or pouring vessel, in the form of a Hamsa Bird, circa 14th – 16th century, or Lot 192, a Chinese carved jade mountain from the late 17th – early 18th century. Lot 245 is a buff sandstone figure of Vishnu, an aspect of the Hindu Supreme God, from 10th century India. The figure appears crowned with an elaborate sculptural halo. In his two upper hands he holds the chakra and the mace, two elements of the god’s iconography that identify his purified spiritual mind and divine power.

Gray’s will be hosting a special preview party event at their 10717 Detroit Ave. location on Friday, May 10, from 5 – 8 p.m., featuring a guest lecture given by Wendy Partridge and Heather Galloway of the Intermuseum Conservation Association: “What’s that painting worth …and why?” The talk will begin at 6 p.m. with conversation and continued preview to follow.

For more information contact Serena Harragin at 216-458-7695, or by email at serena@graysauctioneers.com. 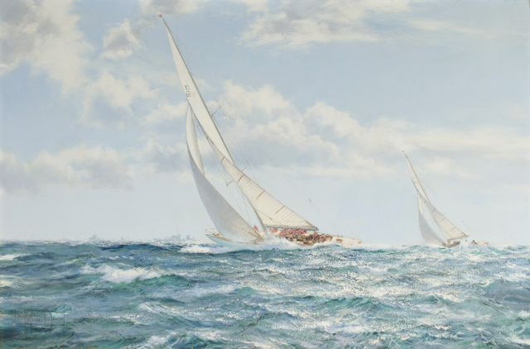 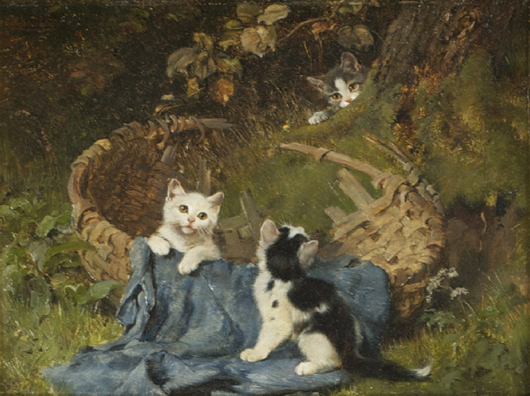 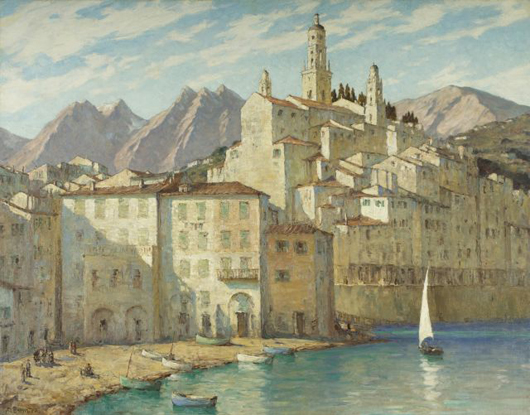 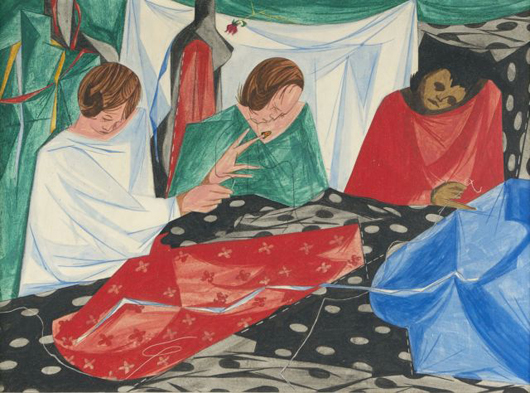 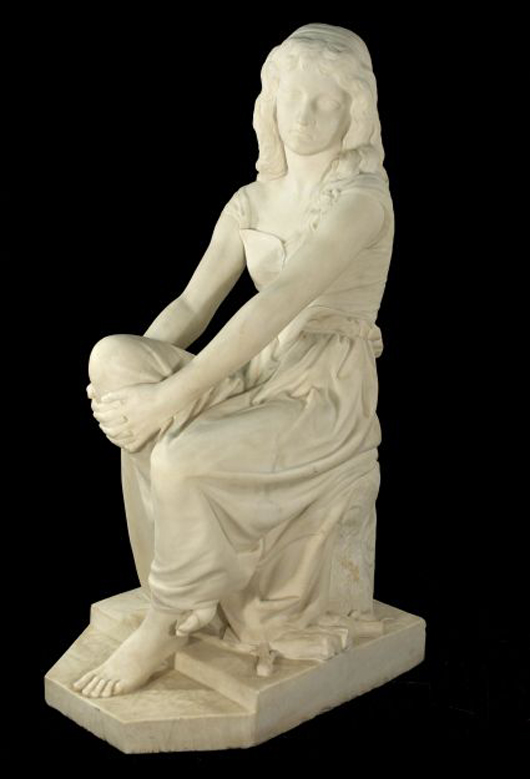 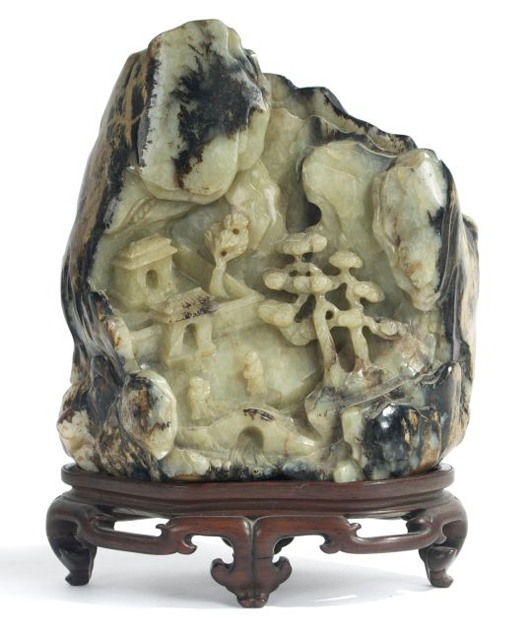 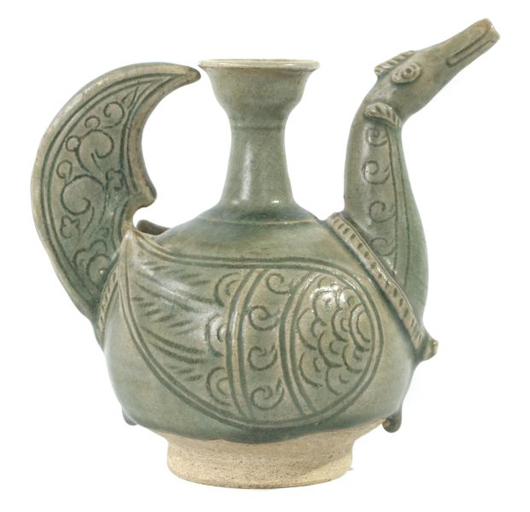 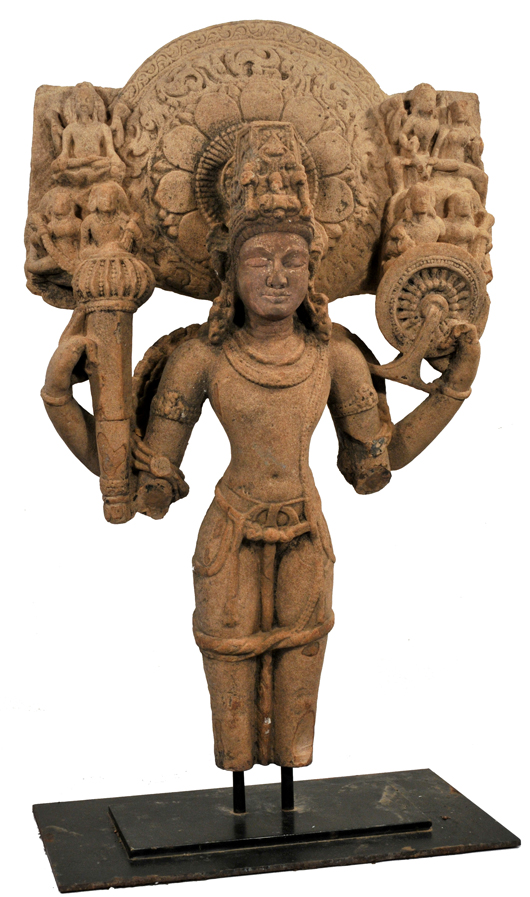