ALAMEDA, Calif. – A Friday, September 9 Inspiring Interiors auction has been added to Michaan’s auction calendar. It will take place one day before Michaan’s estate sale.  Michaan’s Fine Art and Furniture and Decorative Arts departments will participate in both auctions, presenting items of refinement from collections of note. Absentee and Internet live bidding will be available through LiveAuctioneers.

Interiors that once graced The Sherman House in San Francisco and a sprawling mansion in Palm Beach contributed numerous pieces of excellence in the Inspiring Interiors sale, joined by property from the Pacific Heights residence of the family of Andrew F. Burke. A gem from this historic family residence with lineage dating to the 19th century is found in a Maison Krieger-attributed mounted vitrine cabinet (Lot 3149, $40,000-$60,000).  The circa-1880 Louis XV style tulipwood cabinet features gilt bronze ornamentation that includes scrolling rocailles, acanthus leaves, anemone and floral swags and palm frond details surrounding a central convex glazed door.  This exquisite cabinet exhibits the most admirable craftsmanship and beauty, and is an important example of the work of the period. 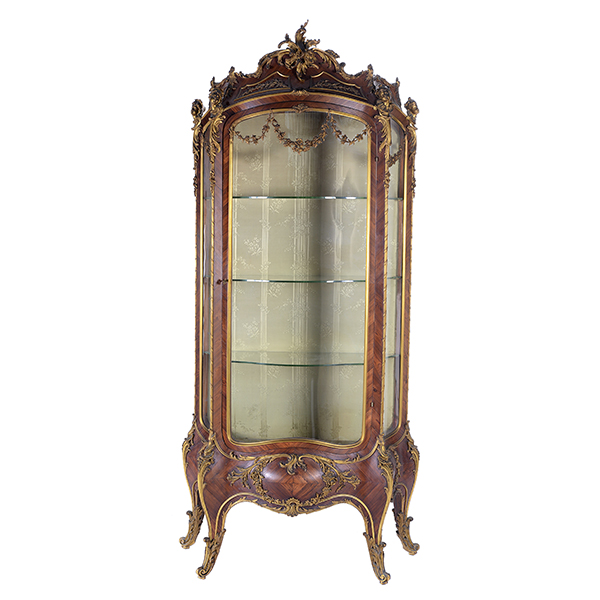 Antoine Krieger and his brother Nicolas debuted Maison Krieger in 1826 at 17 rue Saint-Nicolas in Paris. Counted among one of the most important and influential cabinetmakers of the third quarter 19th century in Paris, Maison Krieger was once patronized by the wealthy, royalty and important ébénistes and marchand-merciers such as Joseph-Emmanuel Zwiener, Paul Sormani and François Linke. At the 1851 Great Exhibition in London, Maison Krieger given an award for an oak sideboard commissioned for a client from the Ottoman Empire. The firm continued to exhibit at all major exhibitions of their category in the 19th century, up to and including at the 1900 Exposition Universelle.

Two exciting auction collections are featured in the decorative arts section. From a San Francisco-based dealer of fine Tiffany Studio glassworks, there is a table lamp featuring an iridescent gold pulled shade (lot 3217, $9,000-$11,000). 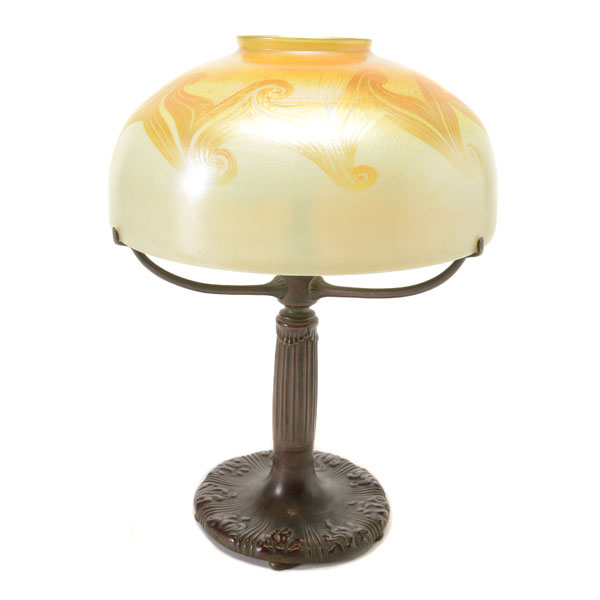 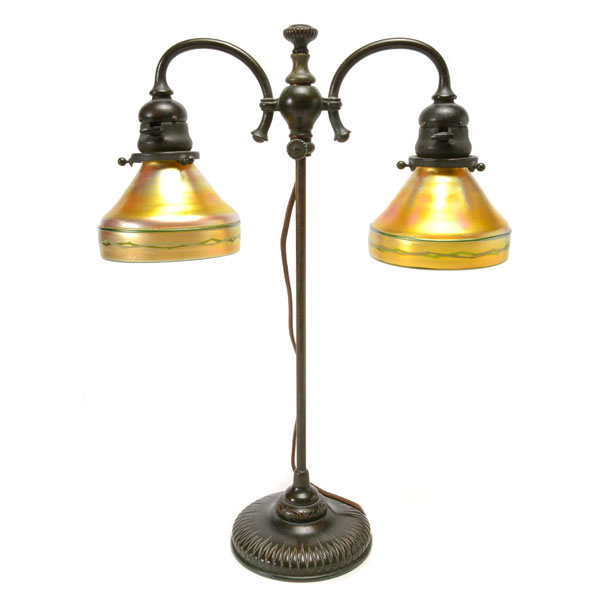 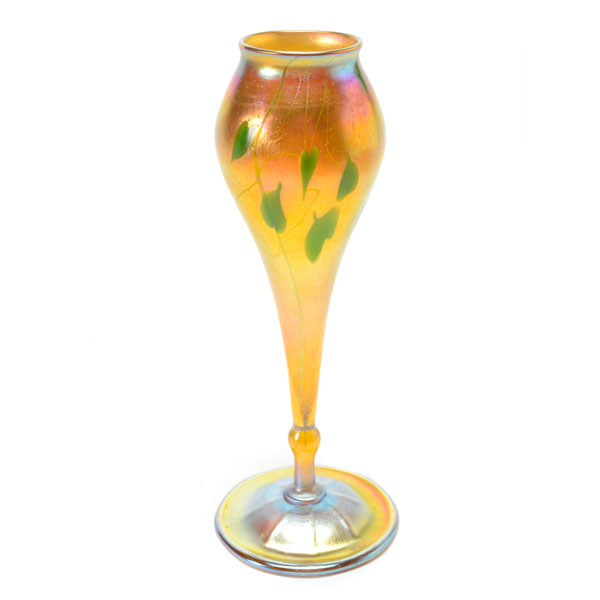 Artworks of excellence have been chosen for the September 9 Inspiring Interiors sale, with artists’ names such as Eduardo Kingman, Charles Cousin and Edgar Bundy spanning the primarily European and American selection. However, an exciting presence of Latin artists graces the sale, as well. Works include: Cirilo Martinez Novillo’s Figuras en Playa (lot 3254), estimated at $2,500-$3,000. 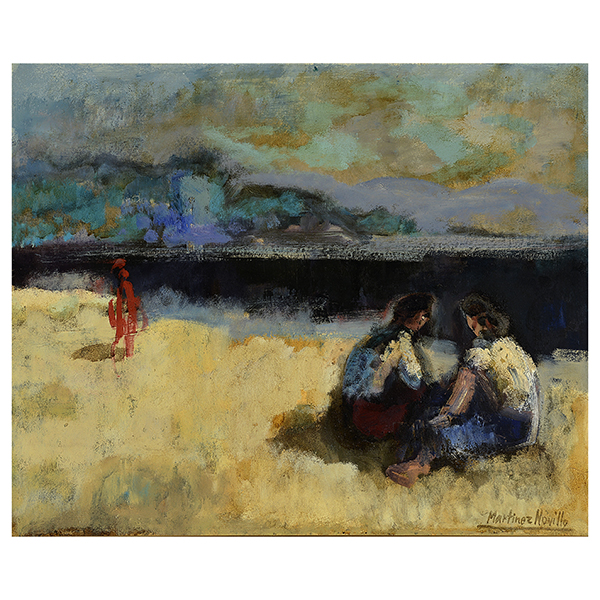 Maria Antonia Dan’s La Danza (lot 3253, $2,000-3,000), a tapestry of Salvador Dali imagery produced by Suzy Langlois titled Persistence of Memory (lot 3300, $1,500-2,000), and a Francisco Zuniga charcoal on paper titled Coloquio (lot 3252, $2,000-$3,000) add even more quality to the selection.  But perhaps the star of the fine art sale section is in the vibrant Jose Maria Mijares oil on canvas En La Playa  (lot 3256, $6,000-$9,000). In this painting, a gathering on a summery shoreline is nuanced by bold primary colors and svelte geometric depictions of neatly positioned people and foliage upon the sand. The result is both linear and fluid, balanced yet carefree, standing as a joyful and vibrant expression by the artist. 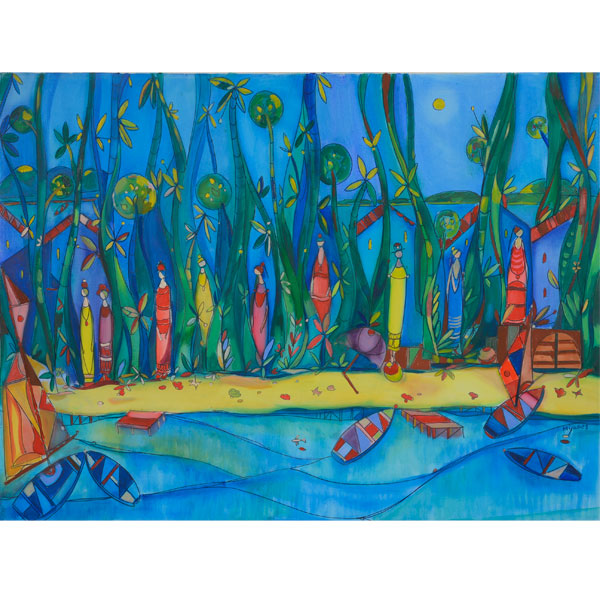 Yet another Mijares at sale is found in an untitled oil painting, also holding an estimate of (lot 3255, $6,000-$9,000).  The subject of this fanciful piece is a reclining woman, executed in Mijares’ confetti of thoughtful geometrics in bold primary colors. Both works by Mijares are accompanied by Mijares Certificates of Authenticity issued by Maria A. Cabrea de Mijares from the Mijares Art Gallery, verified in 2016.

Bid absentee or live online through LiveAuctioneers.com. For additional information on any item in the auction, call 510-740-0220, ext. 0; or email info@michaans.com.