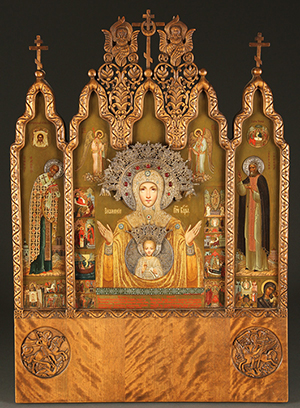 CEDAR FALLS, Iowa – Jackson’s International will conduct an important two-day fine art auction on Nov. 13 and 14. Including over 1,100 choice lots and featuring the collections of Sidney Port and Dr. Vienna Cobb Anderson, the estate of John Brandeis-Baer, as well as items deaccessioned from an East Coast museum, this sale of “World Treasures” is fittingly titled, as important lots from Russia, Europe, Asia and America will all be represented. LiveAuctioneers.com will provide Internet live bidding.

The sale begins with an impressive collection of Russian works, including those belonging to the Rev. Dr. Vienna Cobb Anderson. The Rev. Dr. Cobb Anderson of Richmond, Va., a Yale and Princeton educated Episcopal priest, has passionately collected for many years throughout her travels and is offering her collection to the market for the first time. Complementing Cobb-Anderson’s collection is a collection of icons deaccessioned from an East Coast museum.

The sale will feature over 140 Russian icons, circa 1600-1917, including many rare and exceptional examples. Most notably, an extremely important Imperial Russian presentation icon triptych, from the Fabergé workshop and signed by court iconographer Nikolai Sergeevich Emelianov, circa 1912. This icon is rich in history, given by Empress Alexandra Feodorvona to the administrator of Tsarkoe Selo, Col. Dimitry Nikolaevich Loman (1868-1918). The beautiful icon features the Sign Mother of God in the central reserve, characteristically painted with a gem and pearl encrusted veil.

Also included in Russian works are over 50 pieces of Russian silver and enamel alone including works by Fabergé (including a nice silver and translucent enamel frame), Ruckert, Ovchinnikov, Khlebnikov, Kurlykov, Britzen, Hahn and many others. Russian Imperial porcelain, militaria, Imperial photos and correspondence as well as over 50 pieces of Russian lacquerware and other objets d’art will be offered. Russian jewelry will also be represented including a Grand Duchess Maria Alexandrovna presentation brooch, the Order of St. George and a Galitzine family gold and diamond pendant among other pieces.

Russian artwork will also be represented including two works by Pavel Tchelitchew (Russian 1898-1957) including a watercolor study for Fata Morgana. A nice Russian bronze after Grachev of Cossacks around a campfire will also be offered. Another interesting lot is a large and impressive Russian silver-gilt equestrian covered trophy cup by Pavel Ovchinnikov originally belonging to noted horse trainer and owner Mr. David J. Schneider as a First Place trophy for winning the 1954 McLennan Handicap at the Hialeah Park Racetrack in Hialeah, Florida.

A great sampling of Old Master and European paintings will also be offered. A large Emile Munier (French 1840-1895) oil on canvas highlighting a sweet scene of a mother feeding a small child from a private collection in Chicago will be sold with an estimate of $20,000-$30,000. Also being offered is an Arthur John Elsley (British 1860-1952) oil on canvas of two young girls bottle feeding lambs. This painting is out of a private collection in Ormond Beach, Fla. A Holy Family scene attributed to Giorgio Vasari (Italian 1511-1574) will also be sold.

American art will also be represented including some nice works fresh to the market. A pair of Fern Isabel Kuns Coppedge (American 1883-1951) arrive on the scene for the first time since the owner’s family, the Pendleton’s of Lawrence, Kan., acquired the pair (presumably directly from the artist). The first, October, features a quaint fall landscape and includes an exhibition label from the National Association of Women Painters and Sculptors, New York. The second, The Golden Hour, features a sunset harbor scene.

Also interesting in American art is a pair of John Steuart Curry works that are also appearing on the international market scene for the first time. Both pieces were acquired directly from the artist by Dr. Wellwood and Genevieve Nesbit of Madison, Wis., (staunch supporters of the arts and known friends of Grant Wood, Thomas Hart Benton and the offered artist) and have descended through the family until coming to market. The first is an oil on canvas titled, The First Snow, that was featured in Laurence E. Schmeckebier’s book John Steuart Curry’s Pageant of America. The second is an interesting political sketch, Sketch for Progressive Party Rally, which was a preparatory work for the oil on canvas of the same name.

Modern art will also be represented with works by Picasso, Dali and Hockney as well as two interesting works by Vietnamese artists Le Pho (1907-2001) and Mai-Thu (1906-1980).

What is likely one of the most important ivory collections to come to market in recent times is being offered at Jackson’s during this auction. The collection of Sidney Port, Santa Monica, Calif., features European ivories and works of art. The UCLA mathematics and statistics professor and published author amassed an impressive and important group throughout his collecting history. Some highlights in the ivory category include a French Napolean III Dieppe carved ivory mantel clock (23 3/4 inches), a French Renaissance-style carved ivory sideboard charger (15 1/2 inches) and a German carved ivory and silver mounted tankard with a Roman battle scene (16 1/2 inches). This impressive offering also features figurines, triptychs, diptychs, portrait miniatures and plaques.

European works are also an important part of this sale including an exquisite and important matching French silver-gilt, enamel and ivory chalice, ciborium and monstrance set, Brunet Paris, circa 1920. There is also a nice collection of religious wood carved statues, ivories and Limoges enameled plaques. Three Jean-Lambert Rucki bronzes of St. Peter, the apostle St. John and St. Anthony of Padua will also be sold.

Art pottery and art glass will lead off day two of this sale of World Treasures. Leading the way is a very fine Grueby American art pottery floor vase. Works by Pairpoint, Handel, Tiffany, Daum Nancy, Galle and others will also be sold.

Viennese enamel will also be offered with a pair of palace-size lidded urns, an interesting architectural table clock (possibly by Hermann Bohm), a cornucopia horn attributed to Hermann Bohm, a wood miniature table chest, a harp timepiece and several other interesting pieces will all cross the block.

A large and impressive pair of Continental silver Renaissance-style figural candelabra will start the sale of a nice grouping of silver objets d’art. Also being offered is a magnificent English silver-gilt covered loving cup by Hunt & Roskell. Wine coolers, silver saltcellars, centerpieces, coffee and tea services, tankards, flatware sets and figural groups will all be offered.

A small group of furniture will also be offered from several different collecting categories. An interesting collection of Tyrolean furniture will be offered comprising a few bedsteads and armoires. Also some modern furniture by well-known designers will sell including a Ueli Berger for DeSede sofa with 25 zippered sections, leather and wood armchairs attributed to Donghia, and several sofas and armchairs designed by Edward Wormley for Dunbar.

A small collection of Asian works will round out the trip around the globe for this sale including carved ivory and jade, blue and white porcelain, gilt bronze pieces, famille rose porcelain and other pieces including a very fine Qianlong enameled a gilt bronze five-piece garniture of the period.

As always with auctions at Jackson’s International, all items are available to view in person the entire week prior to the auction for extended hours. For details contact Jackson’s at 800-665-6743. 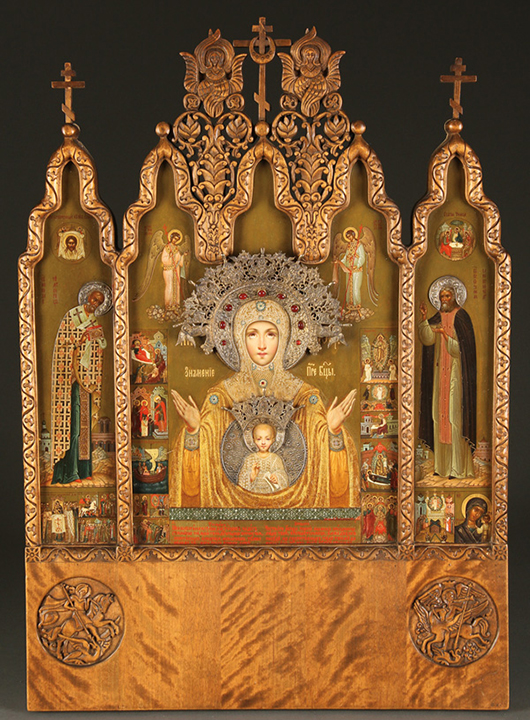 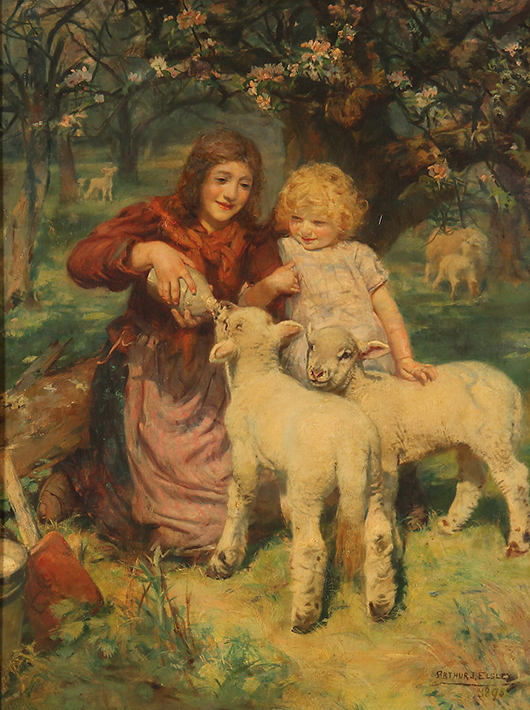 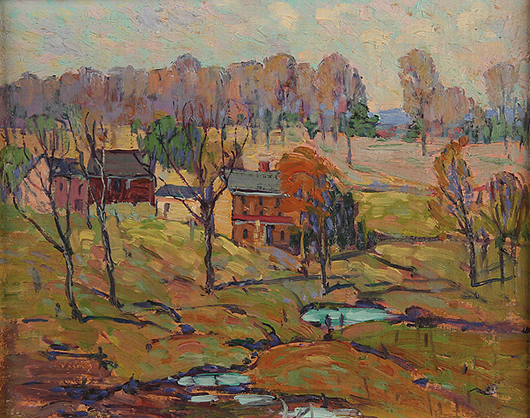 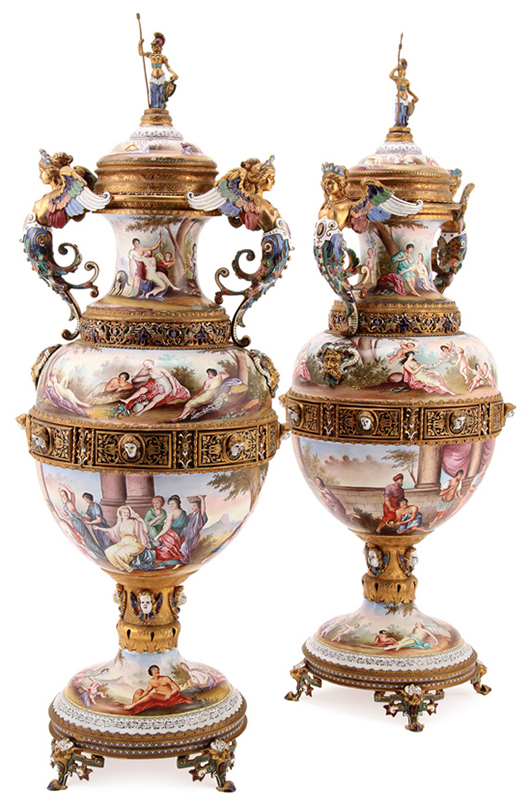 This pair of palace-size Viennese enameled and gilt bronze lidded urns in the manner of Hermann Bohm will be offered at Jackson’s Nov. 13-14 auction. Jackson’s International image. 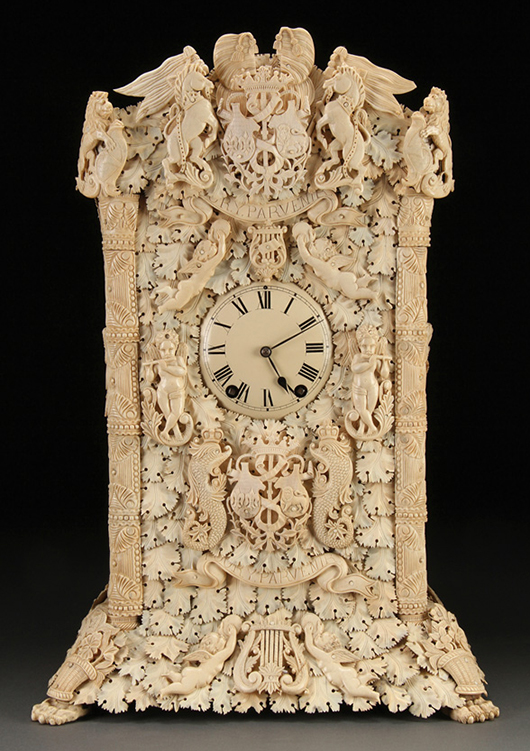