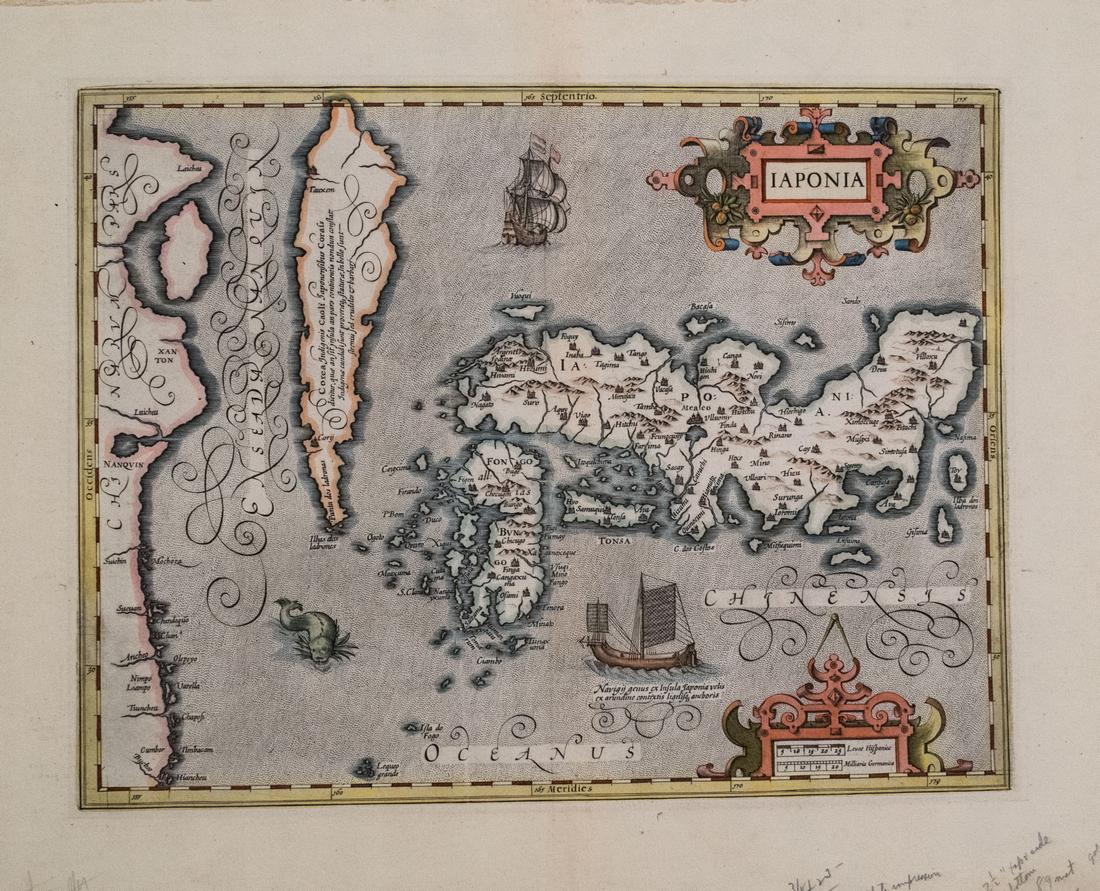 NEW YORK – World travelers can explore both land and sea with a collection of antique maps that will be sold in an online-only auction on Sunday, Feb. 12, by Jasper52. Absentee and Internet bidding is available through LiveAuctioneers.

Unlike current maps, these original engravings trace borders as they were being charted. The 1630 Hondius/Mercator map of Japan and Korea, as an example, shows the latter as an island, but a notation by the cartographers acknowledges the uncertainty whether Corea (Korea) is an island or a peninsula. This map (above) is richly ornamented with two strapwork cartouches, one European (Dutch galleon) and one Japanese junk-style ship, and a sea monster.

Jumping ahead 250 years, the Jasper52 auction is also offering a map of Tokyo in the form of a Japanese woodblock print. This elaborate map of the city has an insert of the port of Yokohama. As was the style of many Japanese city maps, the text radiates from the center of the map, which in this case is the Imperial Palace of Tokyo. Surrounding the map (below) are 20 engraved views of various places around the city. 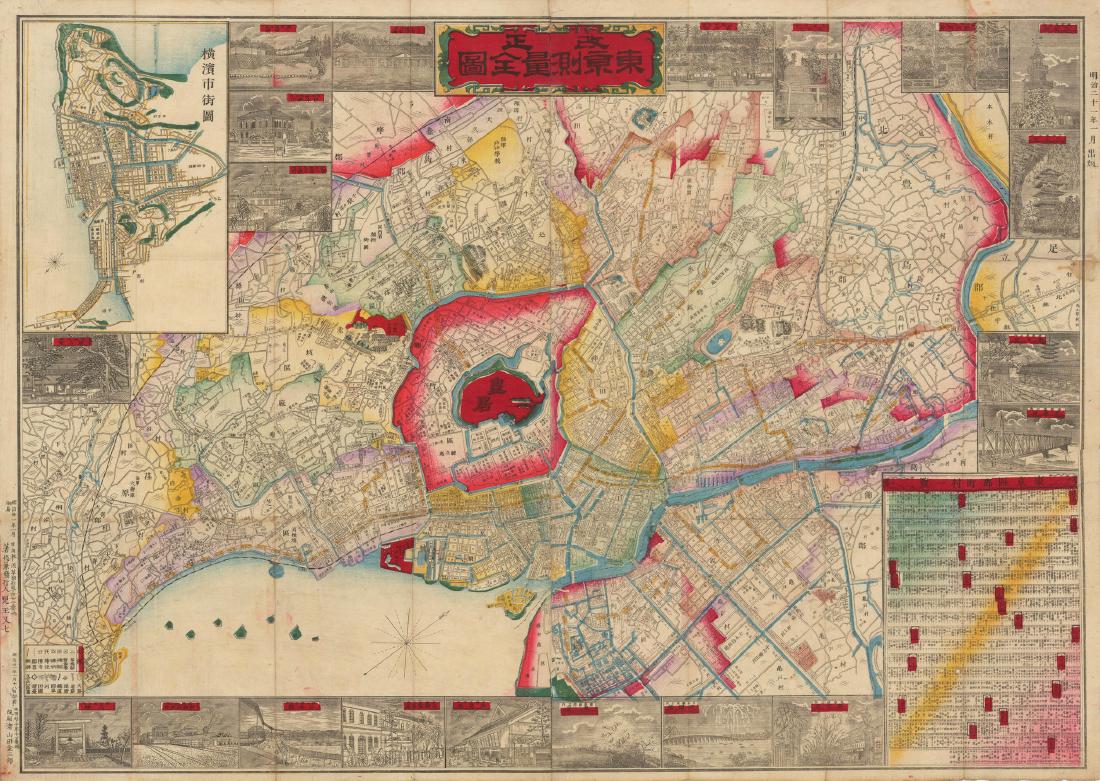 Sailing south, the auction includes Henri Jacques Chatelain’s 1791 map of Southeast Asia. Published in Amsterdam, this fine map features Southeast Asia and includes Thailand, Cambodia, Vietnam, and the Malay Peninsula and the Gulf of Bengalin the north, to Java and Sumatra in the south. The map (below) is centered on Malacca and Borneo. Chatelain depicts even small islands, sea routes, shoals and other places which might threaten the safety of voyagers at sea. 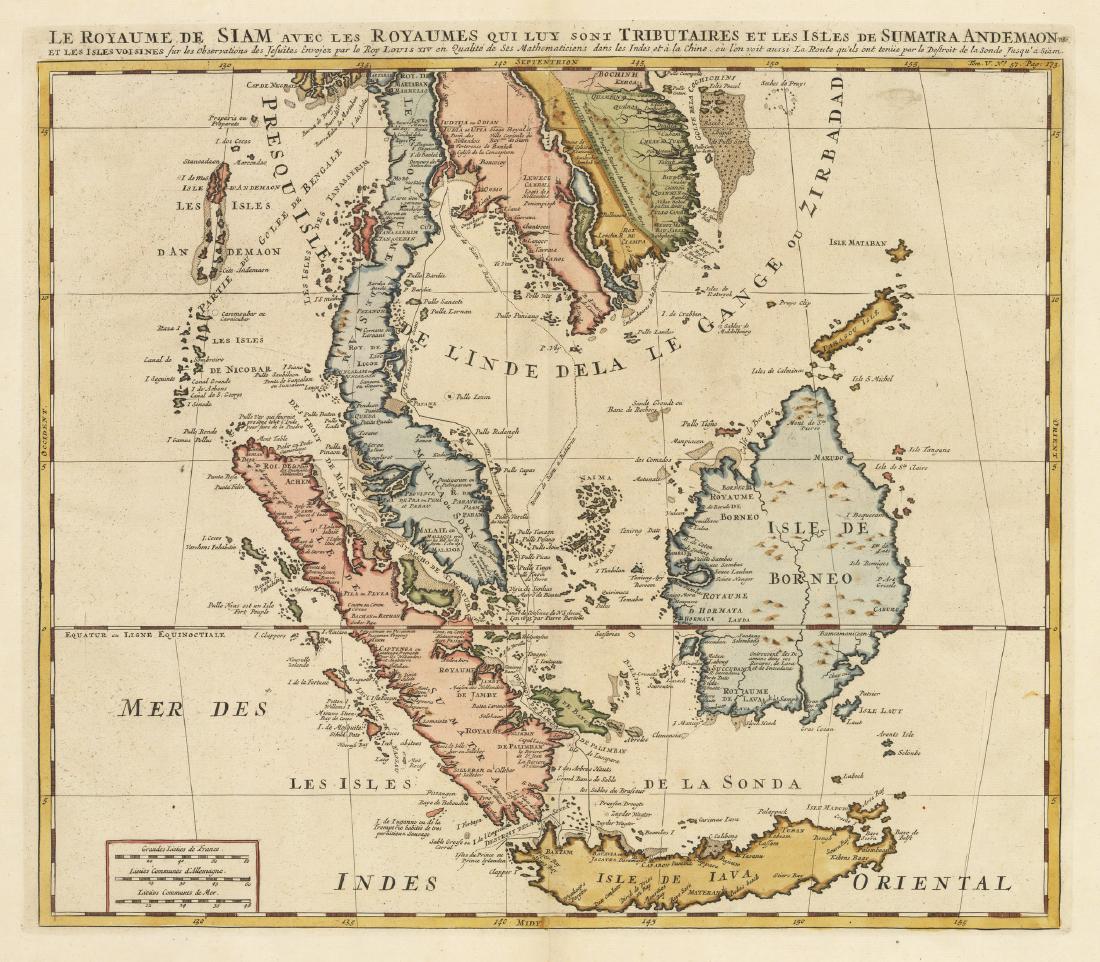 More treacherous water is charted in Gerard Mercator’s 1613 map of the Strait of Magellan, which separates mainland South America to the north and Tierra del Fuego to the South. This map (below) bears a southern projection with North pointing toward the bottom of the map. Not only is this the first map of the Strait of Magellan to appear in a commercial atlas, it is one of a few sea charts produced by Mercator. For over 100 years, the Strait of Magellan was believed to be the only sure way to sail from the Atlantic to the Pacific. The title cartouche is that of early Baroque style and is flanked by two penguins. 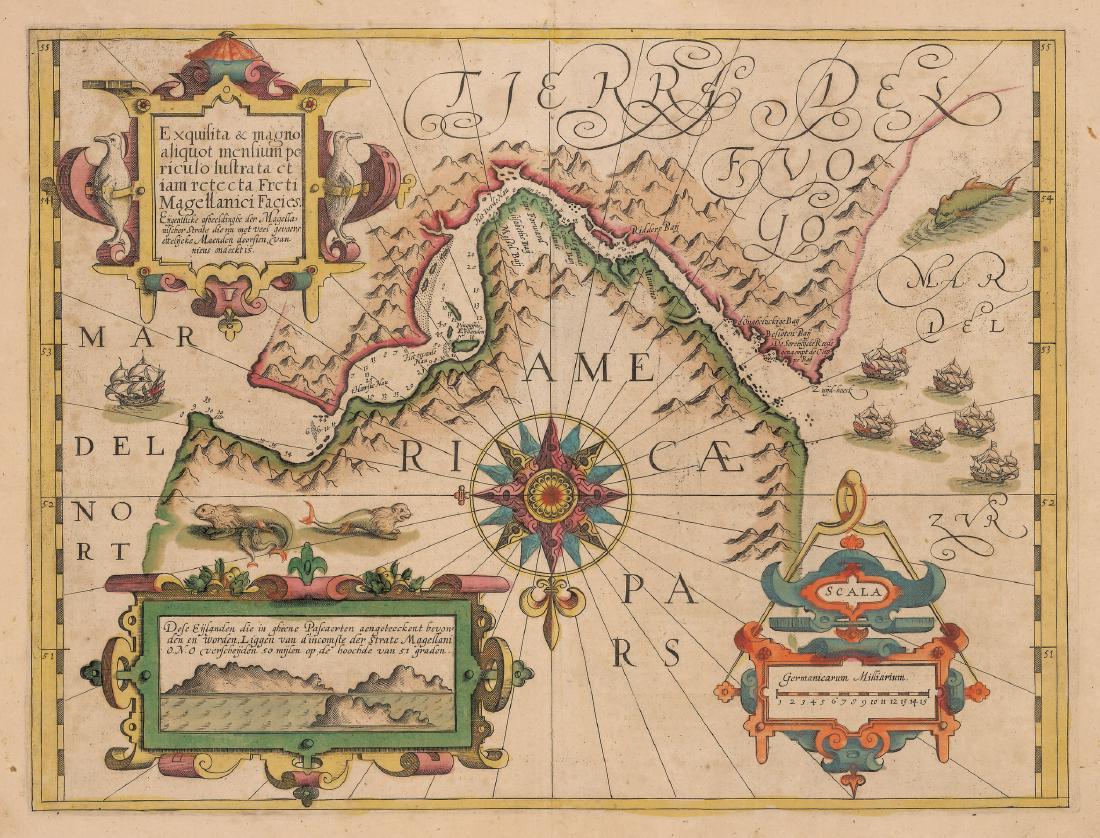 Christopher Columbus would have found R. & J. Ottens map of Cuba, Hispaniola and Florida helpful. The original copperplate engraving was published sometime between 1725 and 1750. The map (below) has insets of St. Augustine, Havana and Santo Domingo. Ahoy, pirates and treasure hunters: the map includes routes of the Spanish galleons. 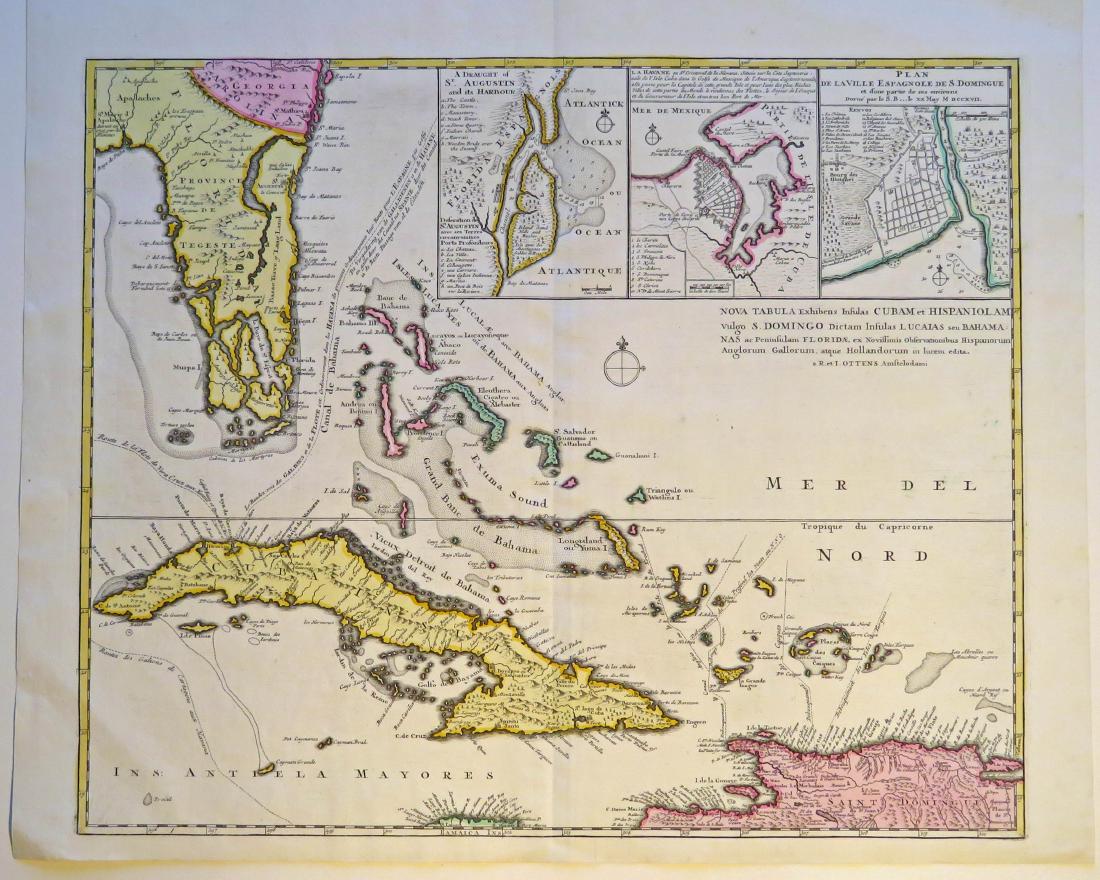 For those inclined to be politically correct, there’s Thomas Kitchen’s 1749 A Correct Map of Europe, a four-sheet political map (below) that divides the continent into its empires and kingdoms. 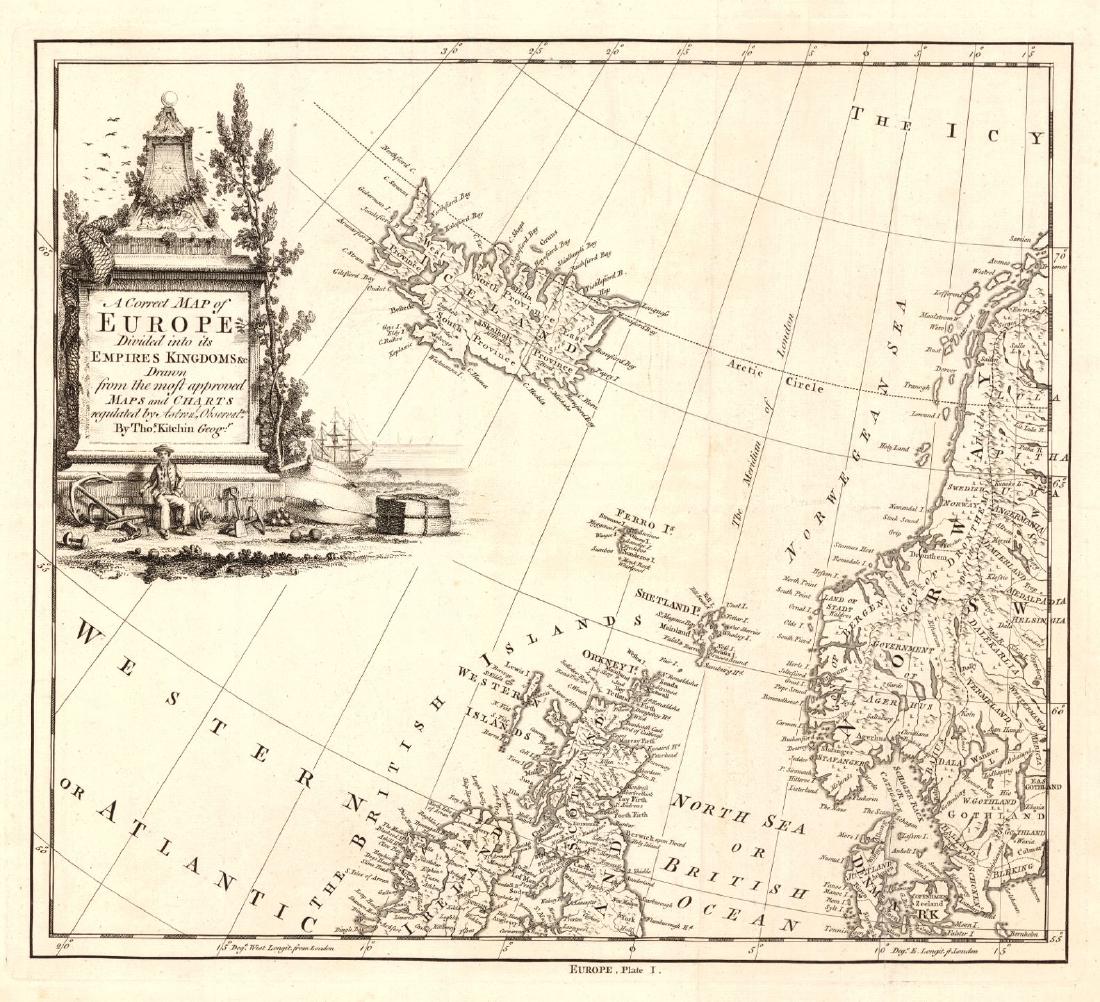 Not only will these maps serve as decorative pieces, but they also will reveal innumerable ways to view the world.