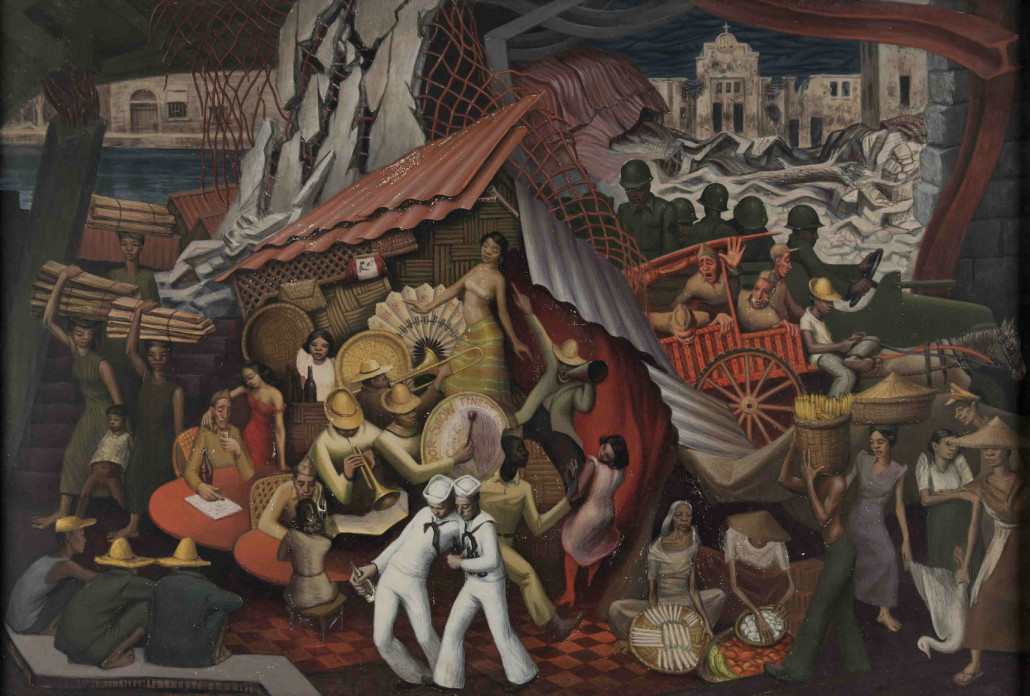 DURHAM, N.H. – Hundreds of works by the late Regionalist-Modernist painter and longtime University of New Hampshire art professor John W. Hatch will be sold at an exhibition, sale and auction of his work on Saturday, Oct. 1, at noon Eastern.

The event will be held in the Fellowship Room of the Community Church of Durham, located at 17 Main St., just off the UNH campus. It is timed to coincide with UNH’s homecoming weekend, giving students, alumni and art collectors a rare opportunity to acquire an original artwork by Hatch.

John McInnis Auctioneers will conduct the auction, which consists of nearly 250 lots. Absentee and Internet live bidding will be available through LiveAuctioneers.com.

Hatch was a beloved figure who instructed more than 5,000 art students over the course of his 36-year teaching career. The works date from when he started out as an artist at 16 years of age, through his student work at Yale University, then into U.S. Army service during World War II, and concluding with his tenure at UNH (1949-1985) and retirement.

The collection, which has been in the hands of Hatch’s family since the time of his death and has never before been offered for sale, will include figure studies and portraits, scenes of the South Pacific from his time in service during World War II, Modernism, mural studies, still lifes, abstract works, landscapes and more – hundreds of works, executed in multiple genres.

Some of the pieces in the collection will be offered for sale, at a fixed price that will range from just $25 to around $200. These will include sketches, drawings, portfolios, sketch pads and a few watercolors. The subjects will mirror those being sold in the live auction, slated to begin around 3:30 pm, with estimates there ranging from $40 to $6,000. 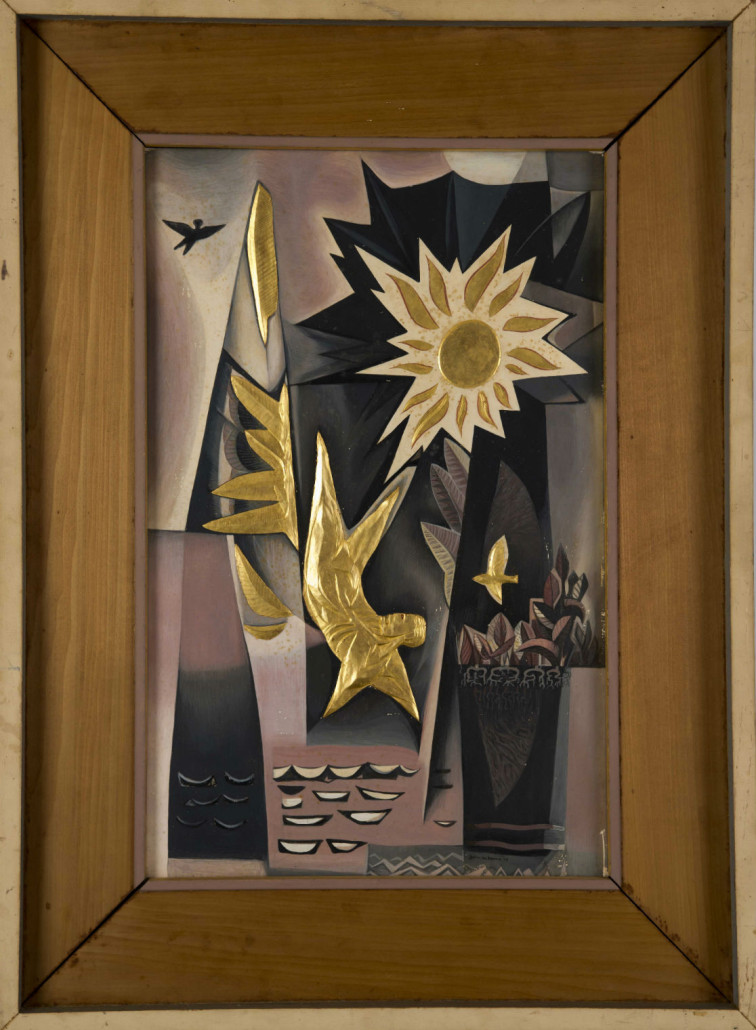 “October 1st will be a once-in-a-lifetime chance to choose from over 245 drawings, watercolors, collages and oil paintings by this truly gifted artist and educator,” said Jay Williamson of John McInnis Auctioneers, the Amesbury, Mass.-based firm handling the auction component, and himself a UNH graduate (Class of 1986).

A lecture preceding the auction, from 11:30 a.m. until noon on auction day, and from 7-7:30 pm on the evening prior (Friday, Sept. 30), will be given by Sam Cady, a former student of Hatch’s. “He was a wonderful mix of jokester and sage,” Cady said, “a man who loved people and loved teaching. Many artists teach by necessity, and resent what they see as a drain on their creative energies. But John found great fulfillment both as an artist and a teacher.”

It’s been said that John W. Hatch was a man of style and a man of many styles. His repertoire included German expressionism, cubism and Chinese “po mo,” among others. Over the course of his rich, 50-year career, he explored the people, the landscape and the seascape around him. His effectiveness in these areas were tied to his ironclad commitment to use his talent to help others.

Through watercolor, ink and sand, he depicted the grandeur of the White Mountains. His acrylic and tempera paintings reflected the crisp light and distinct topography of the Isles of Shoals and Great Bay Estuary. Hatch’s ability to convey the enormity of mountains and the sea, juxtaposed the fleeting nature of human life, serves as a reminder that nature is to be revered and preserved. 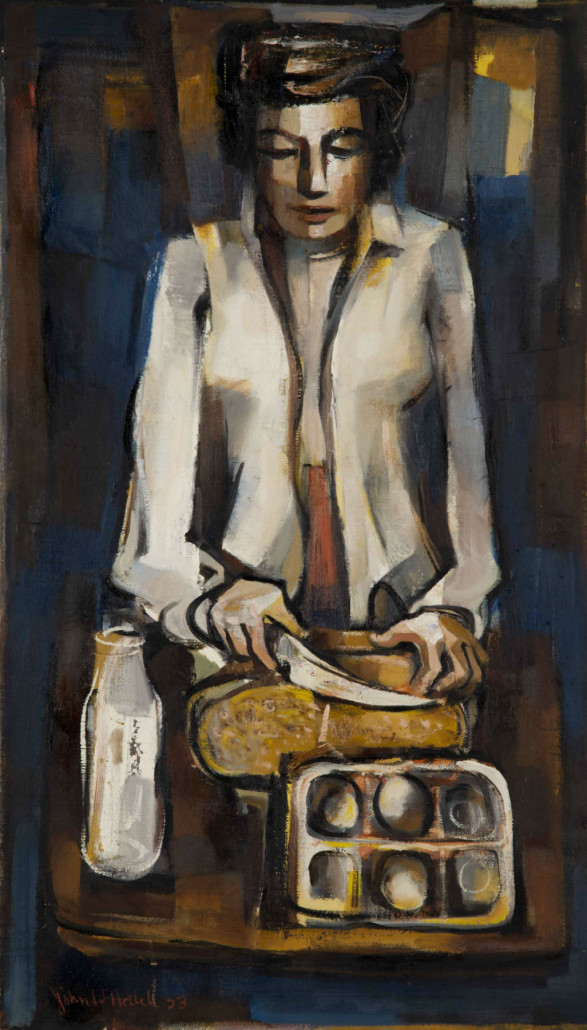 The paintings up for auction will include stunning renderings of the Isle of Shoals, Monhegan Island, Durham, China, Maine, Manila, Cuba, the Connecticut coastline, the White Mountains, New York City and Canada.

Hatch’s resume is both extensive and impressive. He graduated from the Massachusetts College of Arts in 1941, then spent four years fighting in World War II. In 1946, he enrolled at the Yale University School of Fine Arts, where he received bachelor’s and master’s degrees in painting and art history.

Hatch was a draftsman, an artist and a muralist. His works can be found in public and private collections throughout the region. He exhibited at the New Hampshire Art Association; the Currier Gallery of Art (1949-1965); the United States Information Agency in Russia (1961); the De Cordova & Dana Museum (1962, 1964); and the Boston Museum of Fine Arts (1967-1969). 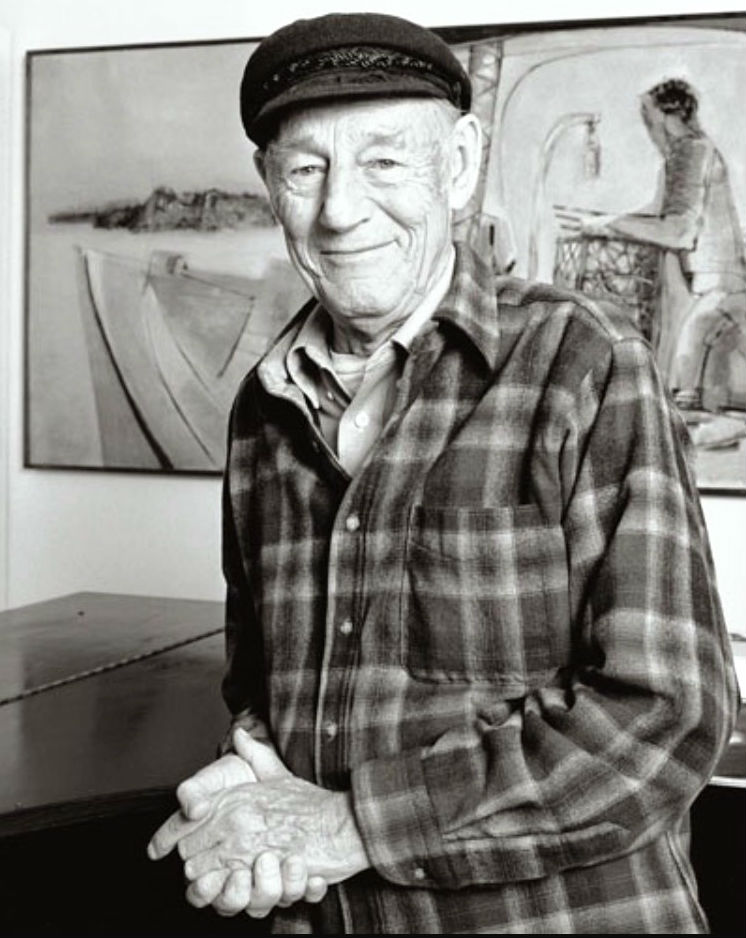 John W. Hatch was an accomplished artist who taught at the University of New Hampshire, Durham, for 35 years. Photo credit: Gary Sampson

Hatch’s work appears in the collections of the Phillips Exeter Academy; Portland (Maine) Museum of Art; Addison Gallery of American Art (Andover, Mass.); Currier Gallery of Art (Manchester, N.H.); the Pennsylvania Academy of Fine Art; and the University of New Hampshire in Durham. He was deeply involved with his community, as an art historian and an environmentalist.

For details contact John McInnis Auctioneers at 978-388-0400 or email mcinnisauctions@yahoo.com.