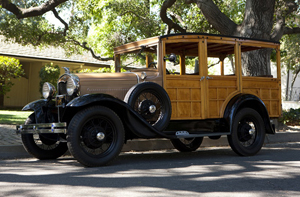 PASADENA, Calif. – John Moran Auctioneers will sell Property of the Estate of Ernest A. Bryant III on Nov. 12. The auction will celebrate the life of a passionate collector and outdoorsman. LiveAucitoneers.com will provide Internet live bidding.

Ernest Albert “Ernie” Bryant III was born in 1931 in Pasadena. As a fourth-generation rancher and a third-generation art collector, Ernie inherited a rich legacy of stewardship of the land as well as an appreciation of culture and beauty from his parents. While the Bryant side of the family had deep ties to California ranching, the Tilt side of the family, founders of the Tilt Galleries in Pasadena, had a strong affinity for craftsmanship and the arts. This combined family history influenced Ernie’s interests, adventures and acquisitions throughout his lifetime. Once proclaimed a “collector of collections” by his friends, Ernie’s acquisitions reflect his deep respect and love of art and artists, ranching, and the West. He built genuine friendships with many of the artists and craftsmen whose work he collected and the gallery owners with whom he did business. In the 1960s, he began collecting and driving horse-drawn carriages and buggies. He was a lifelong horseman, and his interest in driving a team began in his teen years.

Session I of the Nov. 12 sale features prime selections from Ernie’s collection of 19th and 20th century European and American paintings and sculptures in styles both traditional and Modernist, retablos, Japanese netsuke and Persian rugs, as well as British, Continental and American furnishings and silver, as well as eclectic items reflecting his great sense of fun, such as a 1930s motorized model of a runabout boat and a large fiberglass trout by artist Roger Kuntz.

Fine furnishings include an exceptional 17th or early 18th century iron-bound walnut Spanish vargueno, expected to find a buyer for a hammer price between $4,000 and $6,000. A mahogany Spanish Revival refectory table, dating to the 1920s and signed by noted Pasadena designer and craftsman George S. Hunt carries an estimate of $1,000 to $2,,000. Also in mahogany, a late Georgian sideboard will make a gorgeous addition to any collector’s dining room (estimate: $1,000 to $1,500). The sideboard is just one of many lots of English furniture dating from the 17th, 18th and 19th centuries, ranging from finely crafted, elegant pieces such as Georgian dresser bases, to charming provincial pieces in oak, elm and walnut, such as a Charles II paneled oak chest dated 1670 (estimate: $500-$700).

Bidders seeking quality silver will find in Session I a gleaming bounty of breathtaking depth and quality, representing a broad range of types and nationalities, and featuring well-known makers and designers. Many pieces are from Britain’s Georgian period, including a set of four plates by Paul Storr, dated 1808 and decorated with robust piecrust rims (estimate: $5,000-$8,000). Continental silver is highlighted by a set of four German .800 silver figural candlesticks, each measuring 14 inches high (estimate: $2,500-$4500), and a large number of magnificent bird-form table ornaments from the 19th and 20th centuries, including a German silver stork, estimated to find a buyer for between $600 and $900, and a pair of silver pheasants, estimated at $1,000 to $2,000.

Some of the most heated battles in the saleroom, however, will be waged over the several items from the workshops of Georg Jensen. An early example of his “Grape” wine coaster dated 1919 and offered for $6,000-$9,000, is sure to enthuse collectors of Jensen’s iconic designs, as will a double-handled center bowl from the 1930s designed by Jensen workshop member Harald Nielsen (estimate: $2,000-$3,000). An enormous service of flatware in Jensen’s popular Acorn pattern, is offered for $6,000-$9,000, and is complemented by additional lots of Acorn barware and salt and peppershakers.

Just a few of the many other silver highlights are as follows:

Session II of the sale is devoted to Western items. In the late 1970s, Ernie Bryant began assiduously building his collections of early California paintings, Western fine art and sculpture, saddles and horse tack, American Indian artifacts, American and European firearms, and vehicles. Items within this session are sure to excite all those with an affinity for ranchero culture. Several Edward H. Bohlin sterling silver belt buckles, some featuring gold or ruby accents, are sure to turn heads. A number of bronzes by Edward J. Fraughton depict broncos, packhorses and Native Americans. Estimated to earn between $5,000 and $7,000 at the block, a Ben Wagner scale model of a Wells Fargo heavy Concord coach makes an intriguing addition to the catalog and reflects Ernie Bryant’s passion for wagons and carriages.

A cowboy hat and jacket, signed by Frank Tenney Johnson, Joe D. Paxton, and many members and affiliates of the Rancheros Visitadores, an exclusive ranching social club which meets yearly in Santa Barbara, is a wonderful and unusual find. Decorated with original drawings from some of those who signed it, the set is estimated to find a buyer for between $1,000 and $1,500. A stunning parade saddle by Visalia Stock Saddle Co. features tooled roses in the black leather and 80 conchos with Rancho Visitadores horse heads throughout, is expected to hammer for $3,500 to $5,500.

The Bryant collection of works by Edward Borein is extensive, including etchings, drawings, drypoint prints, and watercolors. Offered with an estimate of $20,000 to $30,000, Borein’s watercolor work “The Trail Boss” is a quintessential scene from the artist: a cowboy mounted on horseback watches a distant herd while an expansive Western landscape rolls out below him. Other Borein works included in the offering depict Santa Barbara mission scenes, wagon scenes, and of course, cowboys roping, riding, and herding. 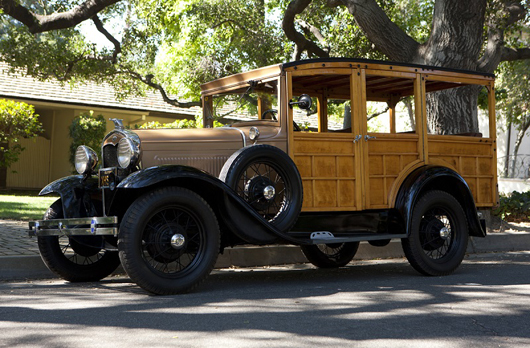 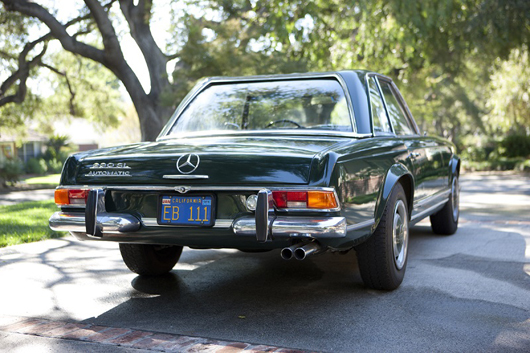 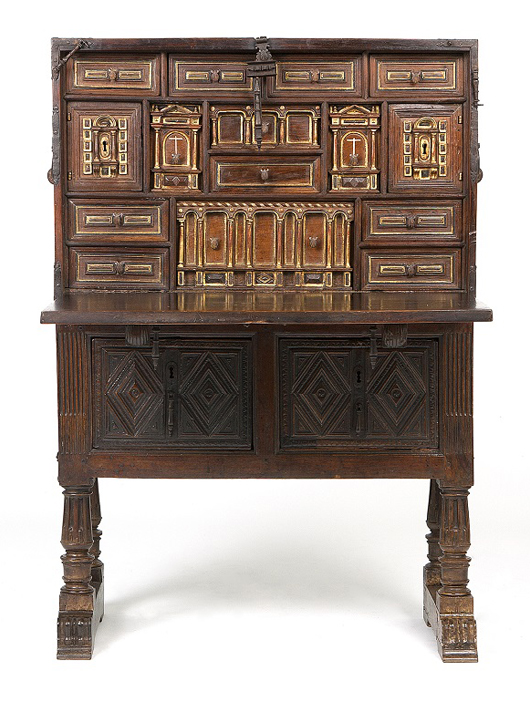 A fantastic Spanish walnut vargueno, dating to the 17th century, is expected to hammer between $4,000 and $6,000. John Moran Auctioneers image. 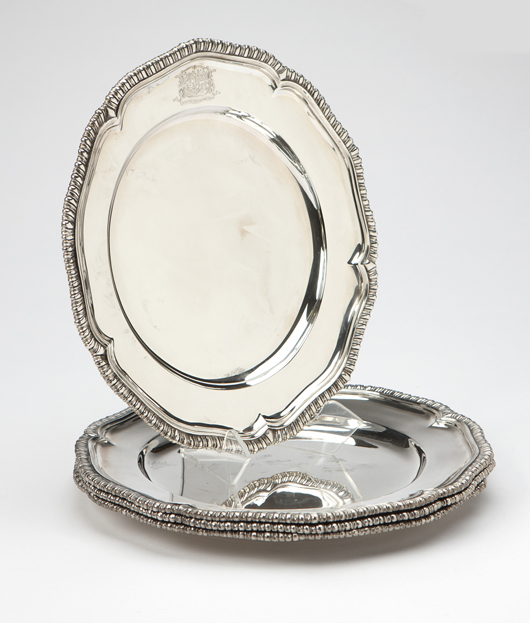 These heavy sterling plates, one of the many lots of Georgian silver, bear the mark of Paul Storr and date to 1808. John Moran Auctioneers image. 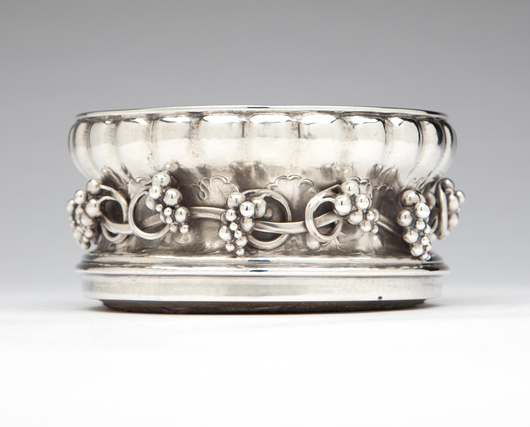 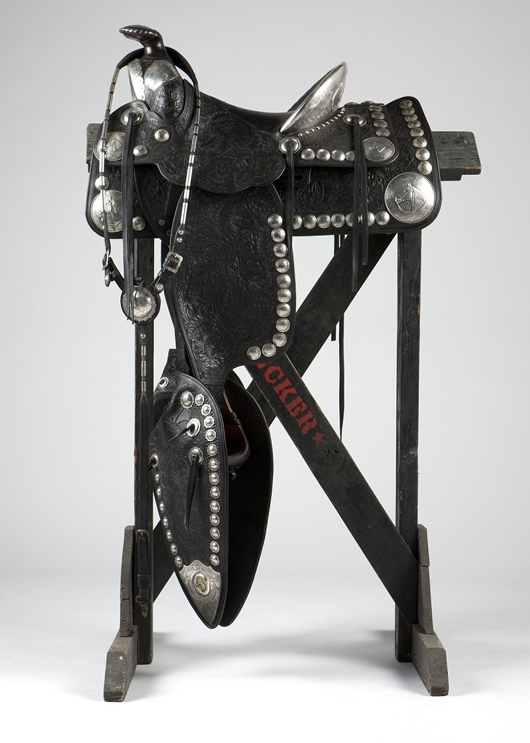 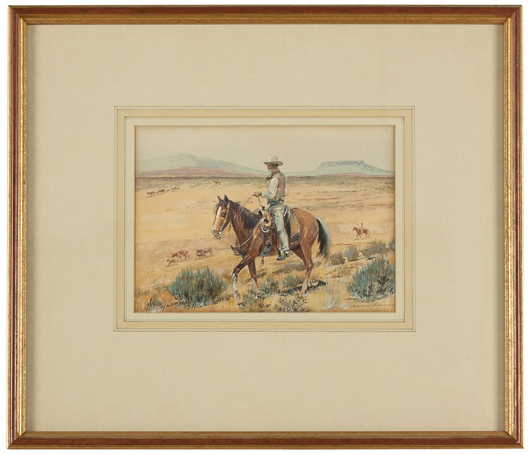 ‘The Trail Boss,’ a watercolor by Western genre master Edward Borein, is one of an extensive collection of works slated for sale by the artist (estimate: $20,000 to $30,000). John Moran Auctioneers image.