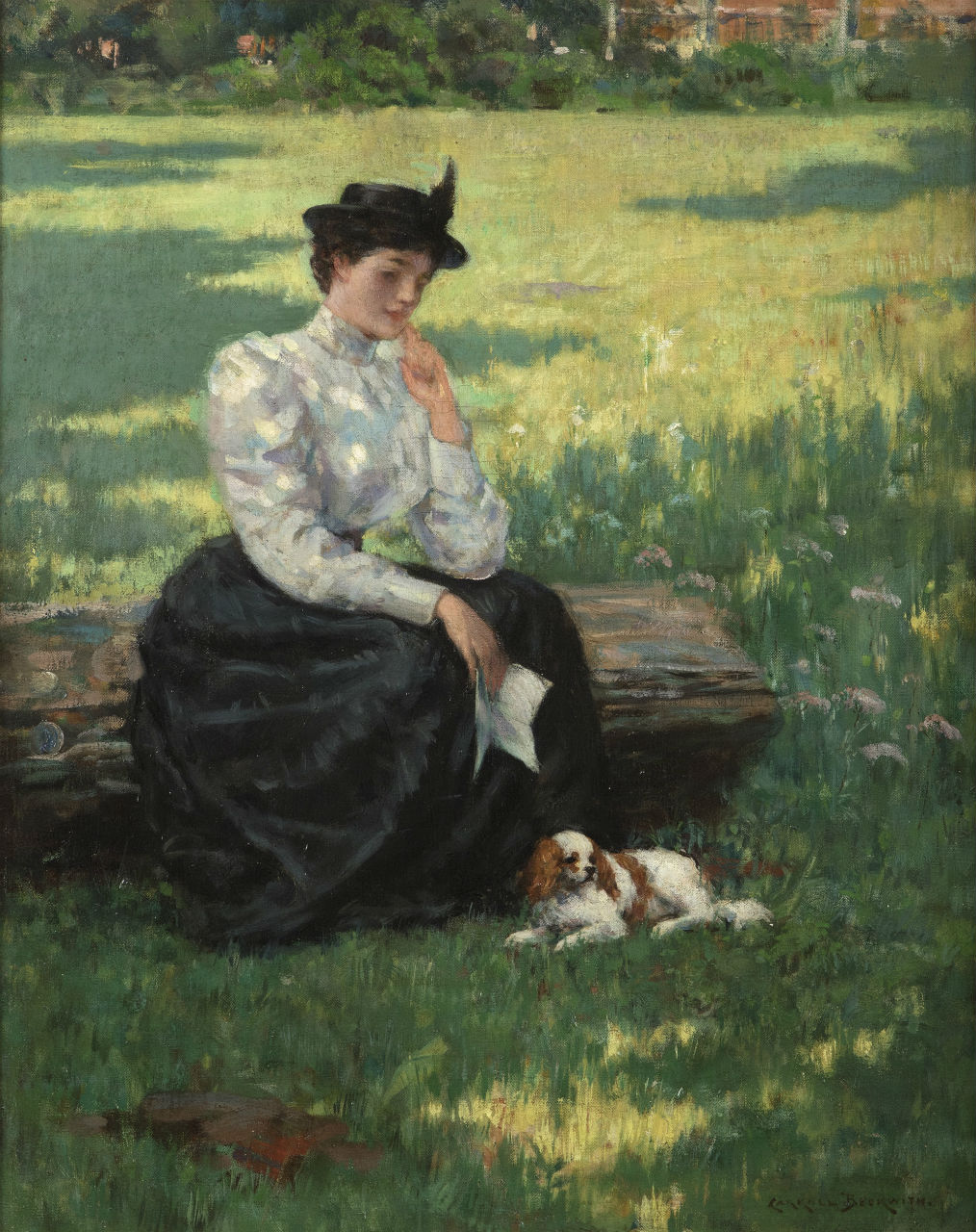 The first session, titled “An Artist Collects,” will be devoted to works of art from the private collection of California watercolorist and educator Gerald Brommer and his wife, Georgia, and comprises approximately 70 lots. The second session comprises approximately 200 works from private collections and estates, among them the Los Angeles-based Goldfield collection, the Fairbanks, Alaska collection of James and Ruth Barrack, and a handful of works from the well-respected University Club of Pasadena.

As a highly esteemed watercolorist and educator of watercolor methodology, it is only natural that Gerald Brommer and his wife would hold a special affinity for artists who prefer to work in the same medium; An Artist Collects includes paintings by local Southern California watercolorists such as Phil Dike, Millard Sheets, Milford Zornes and many others. As longtime patrons of the arts, the Brommers collected many of the pieces included in this session directly from the artists who created them.

Watercolor highlights from the first-session offerings include a wonderful depiction of Bunker Hill, skillfully executed in watercolor by Los Angeles artist Emil Kosa, Jr. (1903-1968); the work carries a $6,000 to $8,000 estimate and is sure to woo Angelino collectors (below). 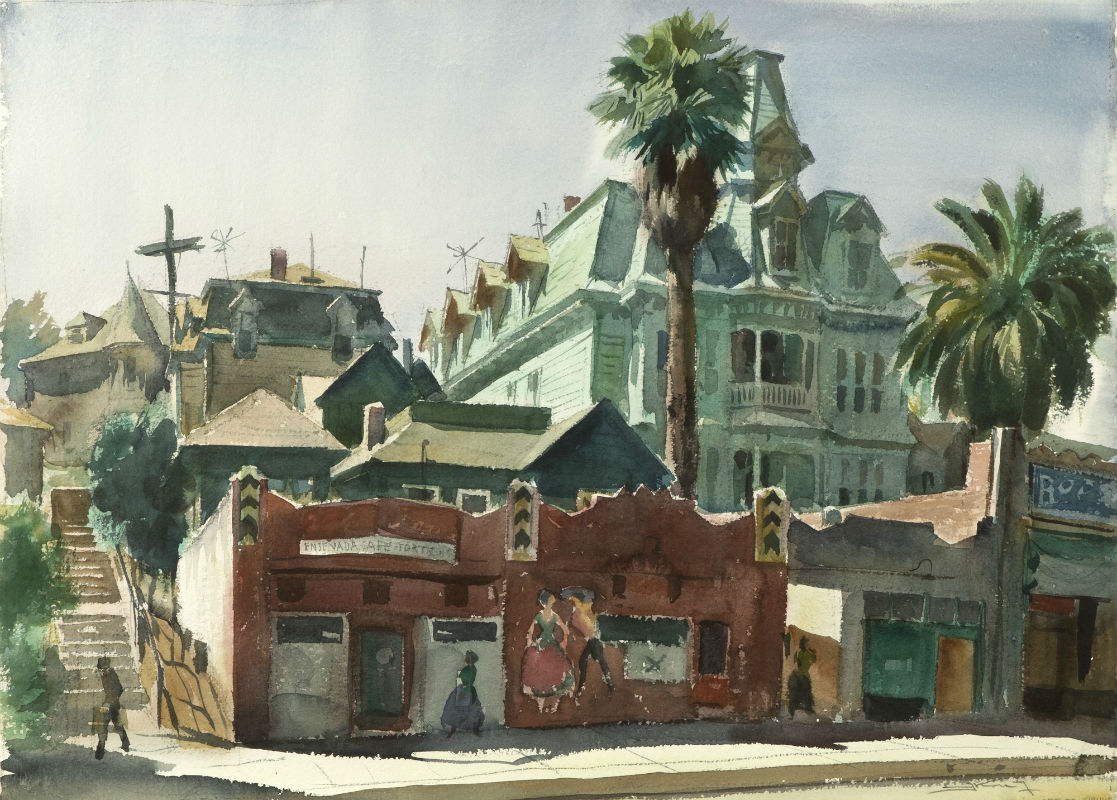 A departure from the other first-session offerings, a singularly striking charcoal and graphite portrait by Nicolai Fechin (1881-1955 Taos, N.M./Los Angeles, Calif.) will head to the block with a $7,000 to $10,000 estimate.

The second-session offerings include approximately 20 works from the estate of James and Ruth Barrack. James Barrack, who purchased Fairbanks, Alaska’s historically significant Samson’s Hardware store in partnership with his father in 1915, was integral in the growth of early Fairbanks. James and his wife, Ruth, continued to be deeply committed to fostering the growth of the interior throughout their lifetimes, not only through their business ventures, but also via investment in higher education, philanthropy and direct patronage of the arts; the fruits of which will be on full display in Moran’s March 21 sales.

The Barrack Collection includes works by many celebrated artists based in the Pacific Northwest and Alaska, such as Sydney Laurence, Harvey Goodale, Jules P. Dahlager and others. Perhaps the most coveted work from the collection is by itinerant Alaskan painter Theodore Roosevelt Lambert (1905-1960 Levelock, Alaska), depicting a dog sled team under an illuminated, orange-tinged polar night sky (below). The artist no doubt drew from his own experience as a one-time dog-sled postman when executing the scene; titled Arctic Night Dog Team, the Lambert will be offered with a $25,000 to $35,000 estimate. 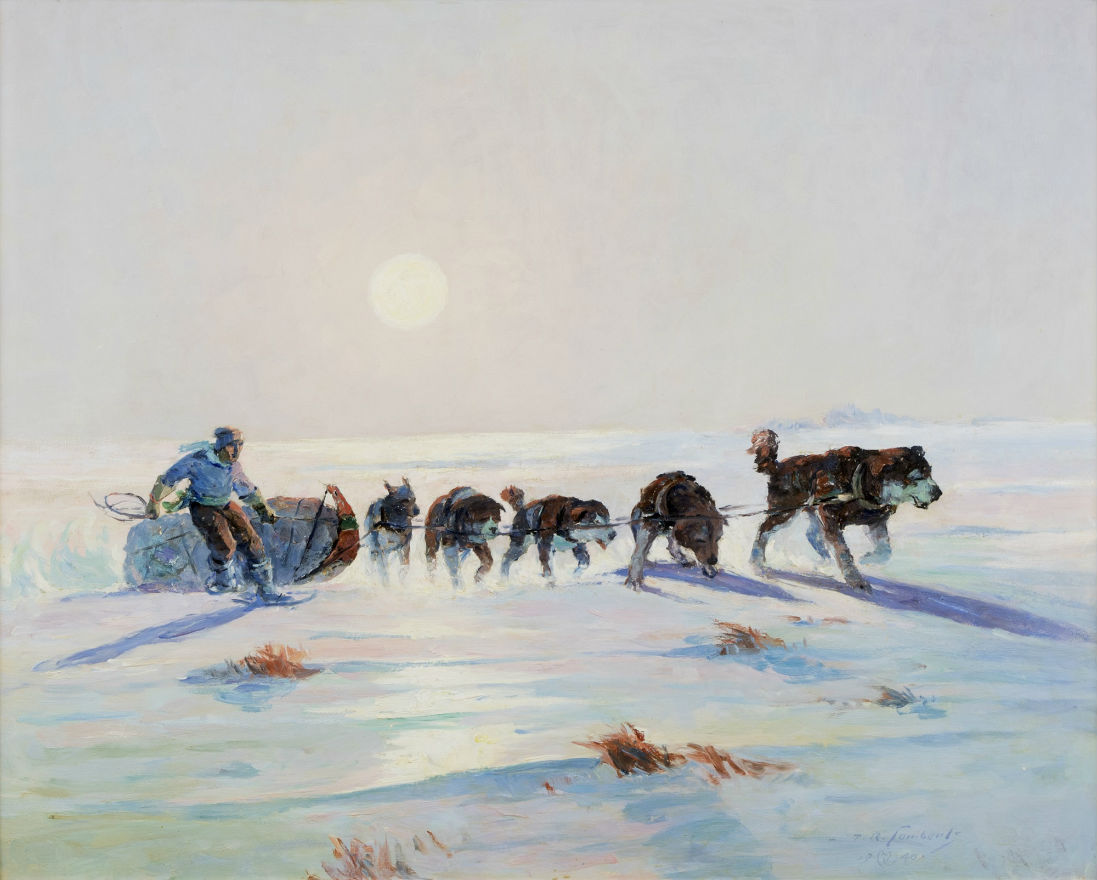 Sydney Laurence (1865-1940 Anchorage, Alaska), will be represented in the catalog with a nocturnal view of a snow-covered cabin in the woods, seemingly illuminated only by the North Star. Estimated to bring $18,000 to $22,000, “Mystery of Light” is a fine example of Laurence’s demonstrable skill in portraying the light conditions native to the remote Arctic.

A number of works by Eustice Paul Ziegler (1881-1969 Seattle, Wash.) are offered with conservative estimates, including Back to Talkeetna, a painterly image of a rider and a team of pack horses trekking through a windswept, snow-dusted landscape; rising up behind the horses and rider is the angular face of Mount McKinley. Back to Talkeetna is expected to hammer between $15,000 and $20,000.

Works by California artists dominate the offering; an exciting example of Franz Bischoff’s (1864-1929 Pasadena, Calif.) hand-painted porcelain is expected to turn heads at Moran’s March 21 event. The unusually shaped Limoges porcelain vase features a tapering neck over a wide, molded foot, and is painted throughout with burgundy and yellow roses. Hailing from a private Florida collection, the vase will head to the auction block with a $12,000 to $18,000 estimate (below). 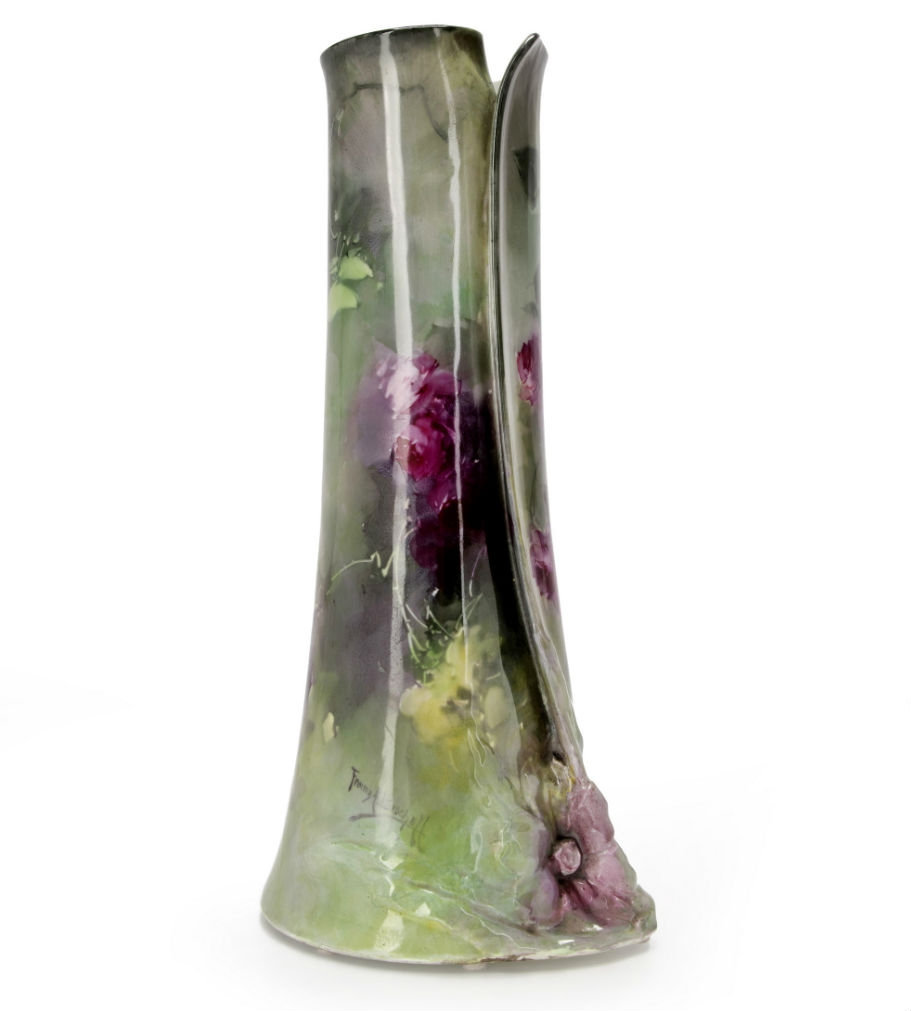 Oriental Synchromy by early 20th century American modernist Stanton MacDonald-Wright (1890-1973 Santa Monica, Calif.), consigned from the Goldfield Collection, will be brought to the block with a $50,000 to $70,000 estimate (below). A figural composition from the artist’s transitional period between the Synchronism style (forged by Macdonald-Wright and fellow artist Morgan Russell) and his later more oriental-influenced approach, the artist uses angular swaths of color to eke out, obscure or highlight nude female forms. 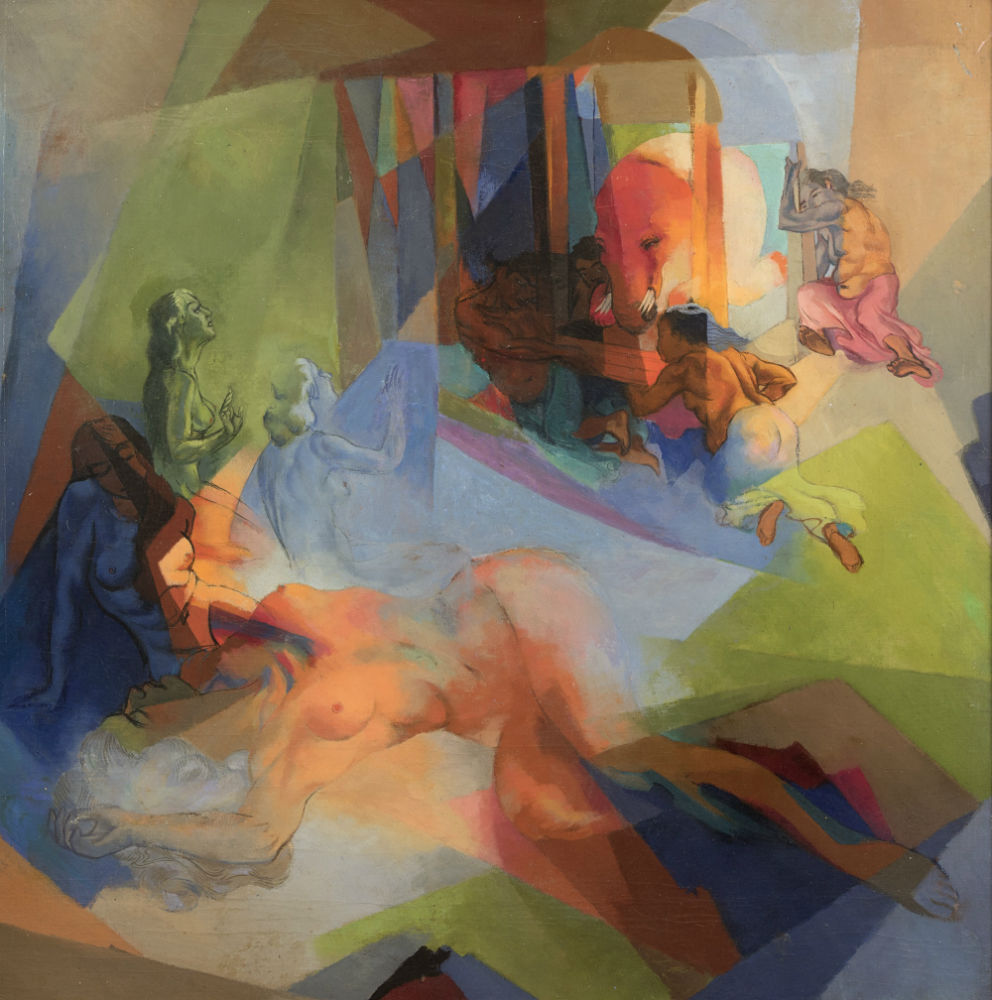 Collectors of works by East Coast artists will find a few gems within the pages of Moran’s March catalog. Venerable New York artist James Carroll Beckwith’s (1852-1917) charming oil painting of a seated woman with her dog in a verdant park is offered with a $100,000 to $150,000 estimate. In The Letter, Beckwith has captured his subject mid-rumination, with an opened letter dangling from the fingers of her right hand; soft, dappled light filters down from the treetops above, underscoring the pleasant charm of this candid moment.

John Moran’s two-session March 21 auction will kick off with “An Artist Collects: Featuring property from the private collection of California artist Gerald Brommer and his wife Georgia.” This session will commence at 6 p.m. Pacific Time (9 p.m. Eastern).

The second session will begin promptly at 7 p.m.