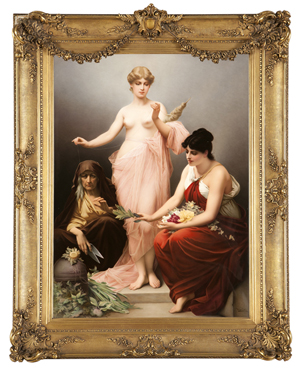 PASADENA, Calif. – Continuing the momentum of an exciting sale season that has already seen the house set several world records for decorative and fine arts, John Moran Auctioneers is preparing to present yet another sale of exceptional property gathered from private collections and estates. Moran’s June 17 Antiques and Decorative Arts Auction will feature 200 lots of carefully selected Arts and Crafts and mid-century modern design, Native American artifacts, Continental furnishings, porcelain, silver and bronzes, and a large and varied array of American and European fine art.

Modern design selections are led by several lots of pottery by Kitaoji Rosanjin (1883-1959). One of Japan’s most famous artists of the 20th century, Kitaoji Rosanjin was a multitalented, self-taught genius, a master of not only of ceramics, but also of painting, lacquerware and calligraphy. He was equally renowned as a gourmet, pioneering the art of ”bishoku,” an aesthetic fusing the culinary and visual arts through the careful selection of ceramic dishes to enhance gustatory pleasure, and likewise the careful selection of food to enhance the visual charm of the dishes. In 1920 he opened his first of several restaurants, a private dining club called the Bishoku Club, over his gallery. As chef and manager, he created seasonal menus of exquisitely composed delicacies served on his own collection of traditional ceramic dishes. When the earthquake of 1923 destroyed his collection, he was inspired to make his own ceramics. Achieving fame for his often daringly simple original designs, which were always primarily inspired by bishoku, he is now credited with the revival of Japanese ceramic arts in the 20th century. In postwar Tokyo he was discovered by Americans in the upper ranks of the occupation forces, and accepting an invitation by the Rockefeller Foundation to hold a solo exhibition at the Museum of Modern Art in New York, made his first trip to America in 1954, determined to demonstrate to the West the superiority of Japanese culture. Twice offered the title of National Living Treasure by the Japanese government, he rejected it both times, but his legacy is honored by shows and holdings in permanent collections at major museums in Europe, America and Japan, and by the high prices his works command at auction.

Moran will offer six lots of pottery by this master craftsman, all purchased at an exhibition in Japan and consigned from the estate of the owner, including two striking, unglazed Bizen-ware vases, one estimated to realize $4,000-$6,000, the other estimated at $3,000-$5,000.

Other modern design highlights include:

– A desk and cocktail table by David Rivera, each made of black and clear acrylic, that appeared in the 1981 motion picture Sharky’s Machine, directed by and starring Burt Reynolds (estimates: $900-$1,200 and $600-$900 respectively).

Modern art collectors will also be delighted by the selection of paintings, sculptures and works on paper, represented by Alexei Jawlensky, Marc Chagall, Salvador Dali, Rufino Tamayo, and Pablo Picasso among others. A kinetic sculpture in polychrome-painted steel depicting a New York cityscape with King Kong, made by Fredrick Prescott (b. 1949 New Mexico), lends a whimsical note, and is expected to fetch $2,000-$3,000.

Aficionados of the American Arts and Crafts movement will find a Dirk Van Erp copper and mica table lamp (estimate: $5,000-$8,000) and three lots of oak furniture by Gustav Stickley, all in original condition, including a circa 1910-1912 chest of drawers, model no. 906, featuring handsome “banded’’ iron hardware (estimate: $6,000-$8,000) and a child’s dresser, model no. 921 and chair, model no. 398 (estimate $2,000-$3,000). Other temptations include gilt bronze accessories by Tiffany Studios in the Zodiac and Grapevine patterns and a large Quezal iridescent glass lampshade.

Traditional Continental decorative arts from the 19th and early 20th centuries, always eagerly anticipated at Moran’s antique sales, will be represented by Louis XV- and XVI-style furniture, including an 18th century provincial walnut commode, an army of French patinated bronze scuptures, and good examples of Sevres-style and Meissen porcelain. Two Berlin / KPM porcelain plaques are finely painted with The Three Fates after the German artist Friedrich Paul Thumann, showing the three allegorical figures spinning the thread of llfe, measuring and cutting it. The larger of the two plaques, an impressive 21 3/4 by 16 1/4 inches, is signed “Wenzel,’’ and is offered for $10,000-$15,000. The smaller version, unsigned, is estimated to bring $3,000-$5,000.

In the category of Native American and Western artifacts collectors will find several Southwest weavings, ranging in estimates from $700 to $2,000; baskets, including Apache figural baskets; and pottery vessels. The latter are highlighted by an Acoma seed pot (estimate: $1,000-$1,500), a San Ildefonso brown ware jar by Carmelita Dunlap (estimate: $800-$1,200), and a large Zia pot by Jose de la Cruz Medina, polychrome-painted with spirit dancers (estimate: $3,000-$5,000). The star lot, however, is a Northwest Coast ceremonial rattle, carved of cedar and polychrome-painted. This rare object is expected to bring $10,000-$20,000.

An item of personal property of one of the most infamous of the mafia leaders of the prohibition era is also offered up: a copper-mounted Western parade saddle that was custom ordered from Texas maker Tex-Tan circa 1944 by Joseph Zerilli (1897-1977). An immigrant from Sicily who rose to become one of the most prominent members of the Italian-American crime families from the 1930s through the ’70s, Zerilli assumed leadership of the Detroit mob, known as the Detroit Partnership, in 1964. He posed as a bread baker and businessman while making as much as $150 million a year from illegal enterprises. Though he spearheaded numerous criminal schemes, including loan sharking, extortion, racketeering and bookmaking, and was suspected in many murders, the only criminal charges he was ever convicted of were speeding and carrying a concealed weapon. Moran’s expects the saddle, which is accompanied by a later associated headstall and reins by Clint Marrs, to realize $4,000-$6,000. 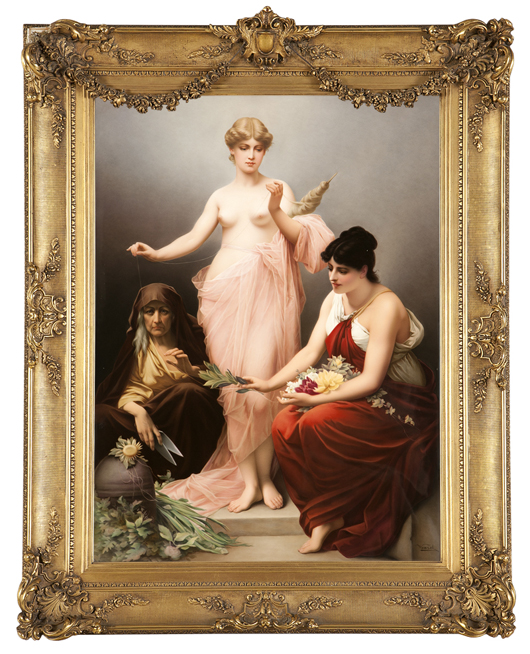 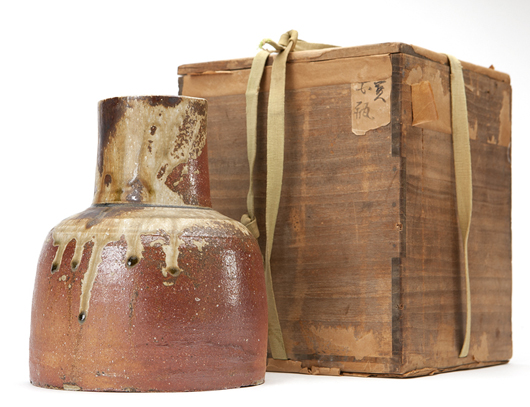 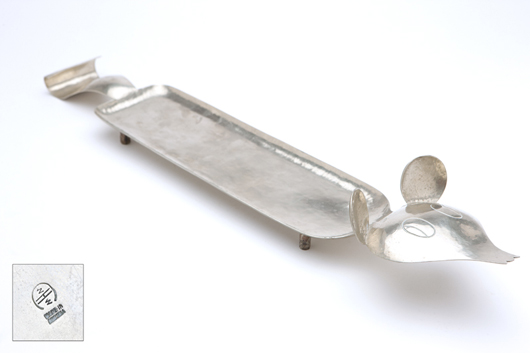 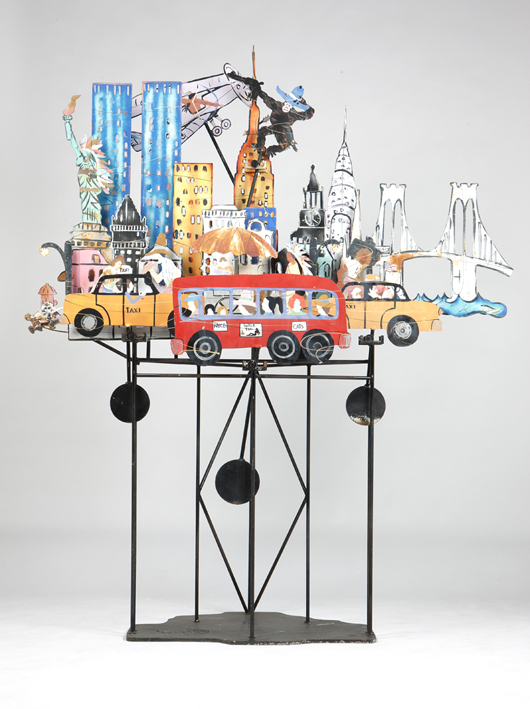 This amusing kinetic sculpture by Fredrick Prescott (b. 1949 New Mexico) is built with swiveling supports so that King Kong can wave from the Chrysler building. Estimate: $2,000-$3,000. John Moran Auctioneers image. 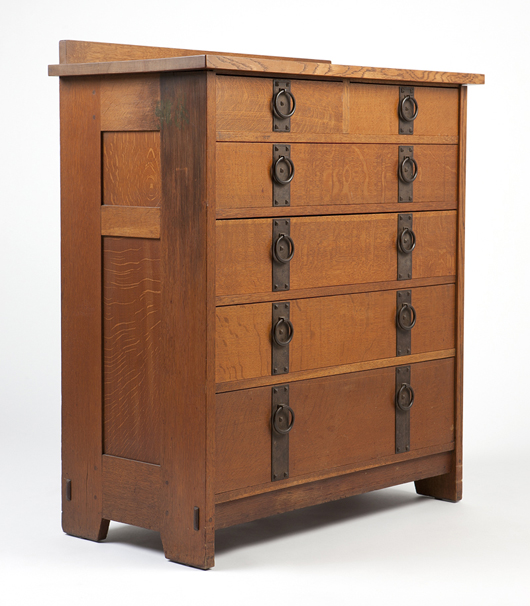 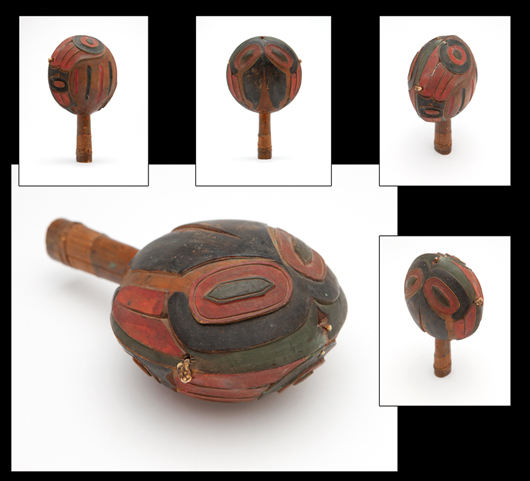