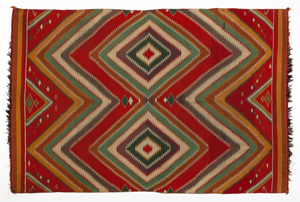 Also noteworthy is a distinguished group of estate silver and Asian objects, offered alongside more than 50 European and American paintings and a selection of Continental decorative objects, American furniture and a variety of highly desirable estate property.

Moran’s has been a magnet for high quality Native American artifacts since making international headlines in June 2012 with the sale of a Navajo First Phase chief’s blanket for $1.8 million, a record for a Native American textile.

The expertly vetted June 18 sale includes approximately 30 blankets and rugs, as well as baskets, pottery, carvings and beaded items, all consigned fresh from private collections. A circa 1890 Germantown Eye Dazzler woven in red, mustard, brown, cream, grey and green wool leads the textiles this time around, carrying an estimate of $6,000-$8,000. Offered at $2,000-$3,000 and featuring a nicely balanced design is a wonderful example of Navajo Crystal weavings measuring in at 7 feet 8 inches by 5 feet 5 inches. The top Native American lot by value is a fully beaded Sioux horse mask dating to the late 19th century. In very good condition, the mask is decorated with American flags, and features, unusually, sewn-on triangular earflaps over the cutout ear holes. This rare museum-quality piece is estimated to sell for $12,000-$16,000.

Other prime examples of Native American art are a Tlingit carved wood and abalone-shell hawk effigy bowl attributed to Augustus Bean and Rudolf Walton (estimate: $2,000-$3,500), and an Eastern Woodlands beaded bandolier bag given to a bureaucrat at the end of the Indian Wars in 1876 and passed down through his descendants to the present owner (estimate: $3,000-$4,000). The baskets include a superb Cahuilla example, polychrome-decorated with two snakes coiling around the sides and base, and centering an eagle (estimate: $3,000-$5,000).

Asian works of art in Moran’s June sale also deserve mention for their high quality. Among them is a Chinese gilt-splashed bronze incense burner dating to the 17th or 18th century and bearing a commemorative Xuande mark. This strikingly handsome piece is happily married with a later-added pierced wooden cover topped by a carved agate finial (estimate: $3,000-$5,000). A carved ivory Chinese brush pot is a visual delight in a more elaborate fashion, executed on multiple planes of relief with intricate piercings, depicting a continuous landscape scene that leads the viewer’s eye along a path winding among rocks and a river, over bridges and through pavilions, following a procession of figures watched by onlookers pausing in their activities. This endlessly fascinating piece is estimated to realize $1,000-$2,000. Another carved ivory piece, a Japanese travel shrine, is shaped as a lotus flower, the two halves opening to reveal within each side a seated Buddha figure (estimate: $1,000-$2,000). A Chinese export porcelain bowl in the familiar Canton rose medallion pattern with figures in pavilions and gardens is distinguished by its massive size: 21 1/4 inches in diameter (estimate: $2,000-$3,500). This is surpassed in estimate, however, by a celadon-glazed warming bowl dating from the Ming Dynasty, thickly potted and incised with a bouquet of mixed flowers and undulating foliate scrolls, and pierced with a hole to the underside for filling the bowl with warm water. It is expected to sell for $3,000- 4,000.

Silver items are led by a magnificent Christofle silver-plated jardinière of oval form with a pierced scroll and foliate gallery. Dating to the mid-19 century, it was consigned from an important private collection, and at an impressive 34 inches wide is offered for $20,000-$30,000. Other notable silver items include a set of Russian imperial-era cloisonné enameled silver-gilt teaspoons, with the original box, by St. Petersburg maker Alexander Lyubavin (estimate: $800-$1,200); a lovely pair of French first-standard silver candelabra (estimate: $1,200-$1,800); and a pair of double salts, also French first-standard, modeled with winged cherubs (estimate: $800-$1,200).

Moran’s antique sales regularly feature a high quality, wide-ranging selection of European and British paintings as well as American works, and this sale is no exception. Traditional 19th century works include an oil by Italian Orientalist Alberto Fabbi (1858 -1906) depicting figures in a courtyard bathed in light (estimate: $6,000-$9,000). At the modernist end of the spectrum is a lithograph by Mexican artist Rufino Tamayo (1899 -$1991) depicting an angry wild dog in glaring colors to match the subject matter (estimate: $1,500-$2,500).

In addition to the cataloged portion of the sale, Moran’s will also present the uncatalogued “Discovery” sale immediately following. This 300-lot session will offer similarly themed items, including an additional large selection of Native American artifacts.

Consignments are accepted throughout the year for Moran’s Antiques and Decorative Arts Auctions, held six-seven times a year, their triannual jewelry sales, and for their major Fine Art Auction, held biannually. Contact Moran’s offices at 626-793-1833 or info@johnmoran.com for more information about any of their upcoming events.

View the fully illustrated catalog and sign up to bid absentee or live via the Internet as the auction is in progress at LiveAuctioneers.com. 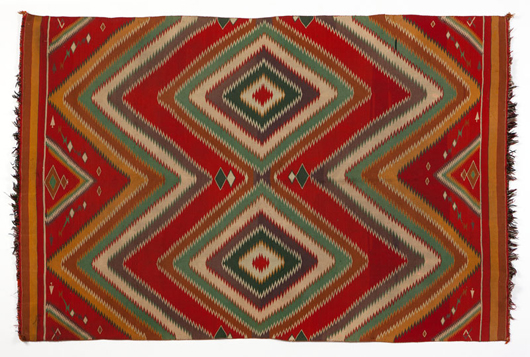 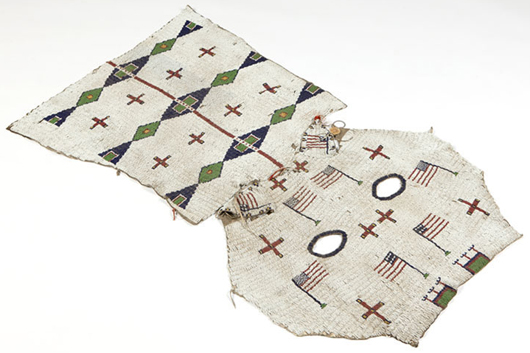 Offered at $12,000-$16,000 in Moran’s June sale, this fully beaded Sioux horse mask featuring American flags and unusual ear flaps was likely made for use in parades. John Moran Auctioneers image. 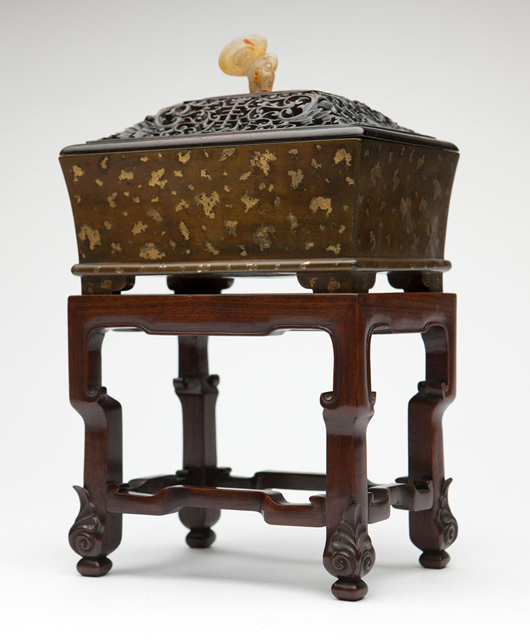 One of the select group of Asian works of art in Moran’s sale is this gilt-splashed Chinese bronze censer dating to the 17th or 18th century (estimate: $3,000-$5,000). John Moran Auctioneers image. 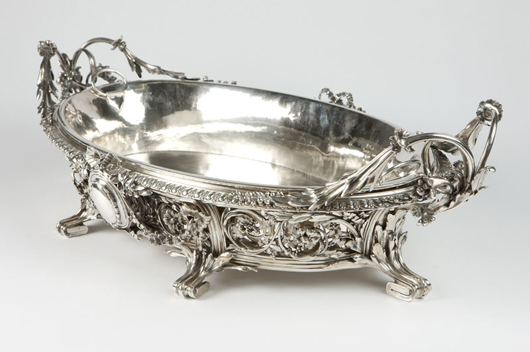 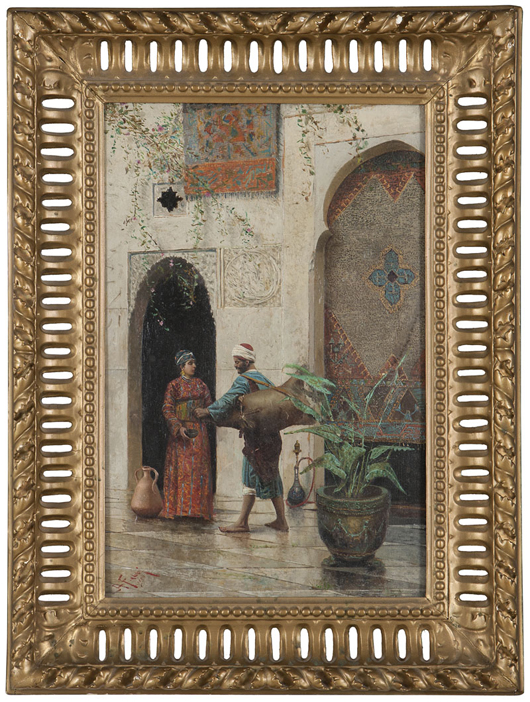