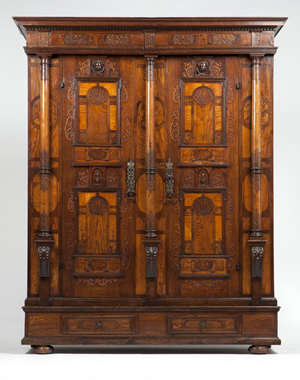 Estimated to bring $7000 to $10,000, this Continental armoire is richly veneered with oak, elm, and burl walnut, among other woods. John Moran image

PASADENA, Calif. – In stark contrast to Moran’s modern-leaning June 17th Antiques and Decorative Arts Auction, attendees at the Southern California house’s July 22nd sale will find the saleroom floor resplendent with the gilt detailing of Continental antiques, including a large selection of Louis XV and XVI furniture, urns, clocks, and wall mirrors, displayed beside Edwardian and Renaissance Revival-style furniture, European porcelain, bronzes, art glass, Continental and British paintings and sculpture, and American midcentury modern pottery and furniture. The majority of the July offerings were culled from just five important Southern California private collections, and as always the catalog boasts the fresh to the market pieces of the highest quality.

Internet live bidding during the sale will be provided by LiveAuctioneers.

Fine art consignments include works covering a variety of price points, highlighted by a number of very collectible works by noted European artists. The first, by Fernand Pelez (1843 – 1913 French), is a study for a larger work titled “Petit Misere ou Mendiant au Chapeau,” which recently sold at Sotheby’s Paris for an impressive price of $80,120, well over its pre-auction estimate. The study offered at Moran’s is conservatively estimates at $6000 – $8000.

A moody composition titled “Le Reveil du Coeur” (The Awakening of the Heart) by Anatole Vely (1838 – 18812 French) is one of the largest and most exquisitely detailed of the artist’s works to be offered at auction in recent history. The stunning oil is estimated to find a buyer for $10,000 – $20,000. Known for his maritime compositions, Jules Noel’s representative oil on canvas depicting figures by a group of docked boats is estimated to earn $3000 – $5000. A selection of Erté gouaches hailing from a private Southern California collection will also be offered, including “Midsummer Fair, Le Tir Les Tireurs,” “Venus et les Trois Graces,” and a work featuring an alluring gypsy dancer, all offered for estimates under $1000.

Fantastic selections from an impressive Montecito Estate offer up a number of highlights, including a selection of striking carved giltwood wall mirrors in varying sizes. A monumental carved gilt wood four-panel screen, covered with an antique Flemish tapestry, demands a grand space for display, not only for its size but its visually arresting quality and craftsmanship. The screen is estimated to find a new home for $20,000 to $30,000. An exquisitely decorated gilt bronze-mounted “boulle” marquetry and ebonized bureau plat, with a serpentine rectangular top inset with a gilt-tooled maroon leather writing surface is estimated to bring $5000 – $8000. A robust Continental marquetry armoire, veneered with oak, elm, burl walnut and other woods with scrolled motifs and columnar supports carries an estimate of $7000 – $10,000.

On a different note, select lots of modern American pottery are also to be featured, including work by Ojai, CA potters Otto & Vivika Heino and Claremont, CA potters Rupert Deese and Harrison McIntosh. One lot, a shallow Heino pottery bowl in mottled brown and black with blue and yellow-green splashes, is expected to bring $600 – $800. Carrying the same estimate and injecting a splash of clean-lined modern sensibility into the catalog is a striking pair of stoneware covered jars in dark brown with vertical cream stripes by Deese.

China and porcelain are among the highlighted categories of the July 22nd sale. A pair of Royal Worcester porcelain candlesticks, dated to 1881 and each molded as seated Mandarin figures juggling spheres, carry a conservative estimate of $800 to $1200 for the pair. A figural group titled “Lessons in Love” by famed maker Meissen should earn a price realized between $2500 and $3500. A sensuous Riessner, Stellmacher & Kessel Amphora porcelain bust depicting a maiden in a yellow bonnet and dress with delicate gilt highlights is sure to charm bidders with the conservative $1000 – $1500 estimate.

For additional information on any item in the auction, call 626-793-1833 or email info@johnmoran.com.

View the fully illustrated auction catalog and sign up to bid absentee or live via the Internet at www.LiveAuctioneers.com. 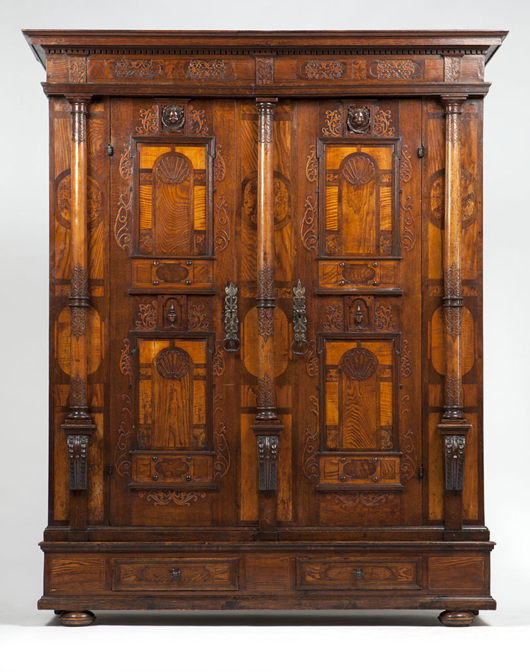 Estimated to bring $7000 to $10,000, this Continental armoire is richly veneered with oak, elm, and burl walnut, among other woods. John Moran image 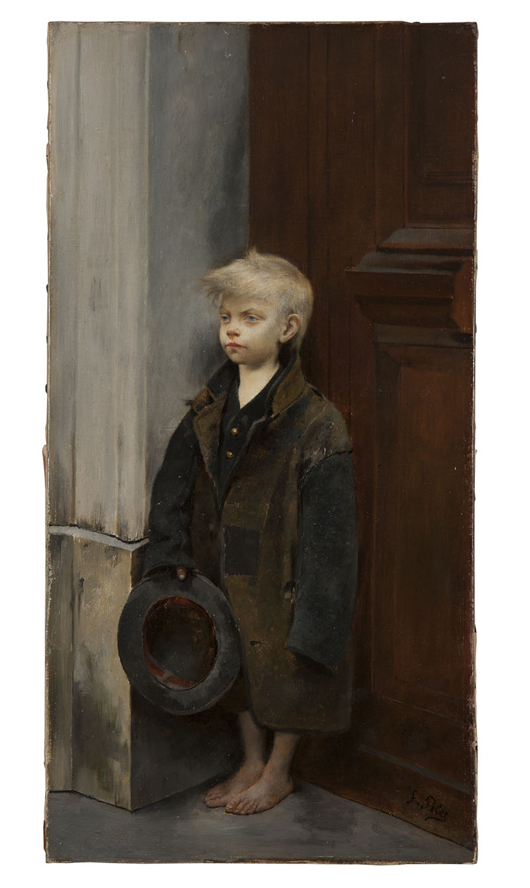 A study for a larger portrait recently sold at Sotheby’s Paris, this naturalist composition is expected to earn between $6000 and $8000 at auction. John Moran image 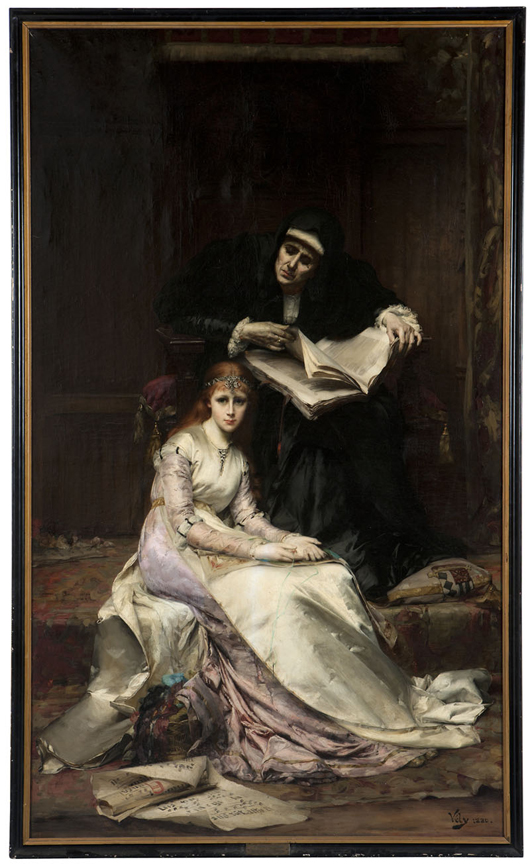 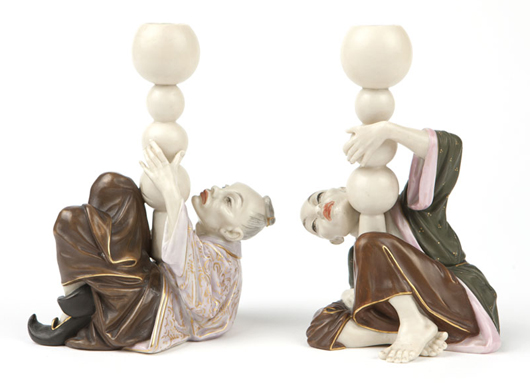 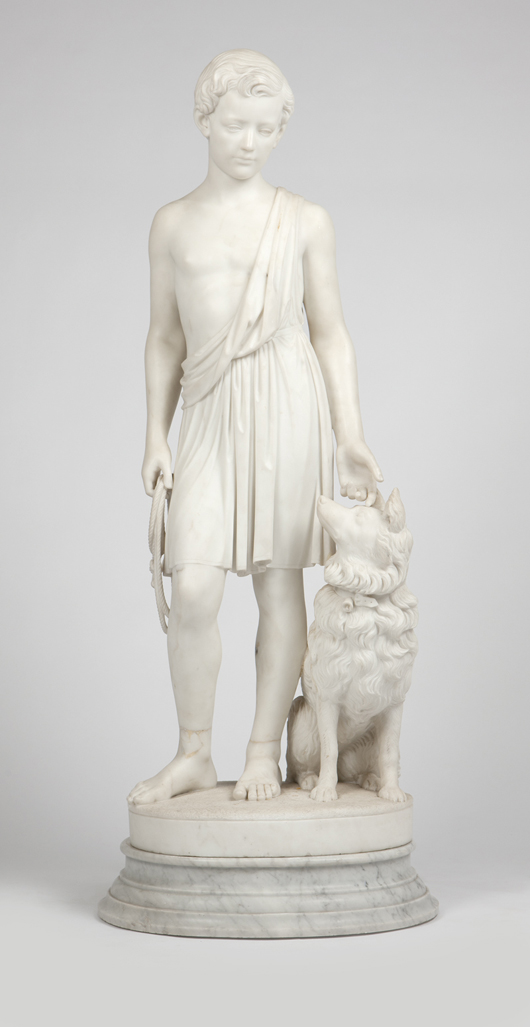 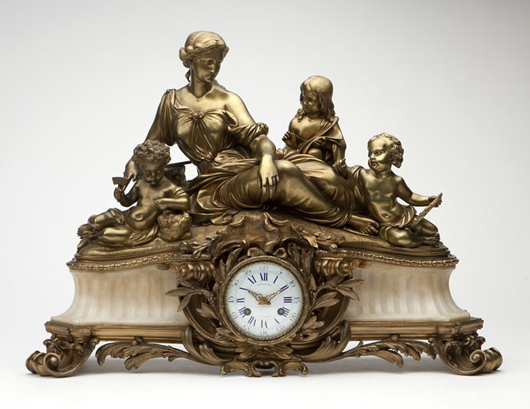 One of a number of quality consignments handpicked from an important Montecito estate, this Napoleon III gilt bronze and marble mantel clock is surmounted by children representing the arts, and a reclining female figure. Estimate: $2000-$3000. John Moran image