A rare and important Etruscan pottery sarcophagus, circa 6th-4th century BC, of eastern Mediterranean origin, constructed in several parts, is from the collection of the late Angelo R. Bergamo, M.D., of Verona, New Jersey. The sarcophagus measures 74″l x 37″h x 18″w and is decorated with the head of a male on the lid and is estimated at $35,000-$65,000.

Important Persian items from the estate of Dr. Mohammed Mossadegh, Prime Minister of Iran from 1951-1953 include an early Persian manuscript, a book of poetry by Jami, Yusuf and Zulaikha, dated A.H. 971 – AD 1563-64, with beautifully painted pages. The book bears a 19th-century owners seal impression at the end of the colophon, of Muhammad Hasain.

There are two notes saying that the manuscript is in the hand of Baba Shah Isfahani. Baba Shah was regarded as one of the best calligraphers in Nasta’liq script. The second note is by Ghulam Riza (perhaps the famous Qatar calligrapher) and the other by Abu’L Fazl Al-Savaj, a doctor and scholar of the period, of Nasr al-Din Shah. The book of poetry was originally the property of Dr. Mohammad Mossadegh, Prime Minister of Iran and was received from his granddaughter’s estate, Mossoume Mossadegh, following her death. It was purchased by the present owner from her widower and is valued at $15,000-$30,000.

There is also an ancient Persian sword with leather and brass scabbard, 30½ inches in length with a Persian poem inscribed on it valued at $10,00-$20,000 and a hand-painted early Qur’an, having floral and bird cover estimated at $5,000-$10,000, both with the same provenance.

Estate jewelry in the sale includes an exceptional Art Deco ruby and diamond platinum bracelet, with a center plaque set with seven rubies, including a round center ruby framed by four small square ones and pave set diamonds. It is the top jewelry lot of the sale and is estimated at $10,000-$20,000. There is also an 18K yellow gold and diamond ring, with a 3.0 carat round center stone, raised above a mounting of 4 round brilliant diamonds (8 marquise and 45 baguette cut) valued at $11,000-$15,000; and a 2.5 carat center stone diamond ring with two kite-shape diamonds on each side, weighing 1.0 carat in total and valued at $15,000-$25,000.

An impressive diamond and sapphire platinum ring, with an old European-cut center stone of 2.44 carats, and 28 old European and round single-cut diamonds is estimated at $36,000-$40,000.

There is an exceptional collection of European furniture in the sale. Of particular interest is a monumental French style, inlaid curved glass cabinet with ormolu trim “Vernis Martin” type decoration estimated at $20,000-$30,000; as well as an inlaid vitrine display cabinet valued at $20,000-$30,000. A French, 19th century Louis XVI gilt bronze walnut table, having Sevres porcelain plaques, is estimated at $11,000-$15,000.

Several lots of French Sevres urns are included in the sale, one signed “Wouvermans,” with a landscape on one side and a tavern scene on the other. is estimated at $15,000-$20,000. An impressive 19th-century, Empire clock set of bronze on marble bases includes a pair of five-light candelabras and is valued at $20,000-$30,000.

A pair of monumental solid brass and stained glass, Tiffany-style lamps with leaded-glass globes currently greets those entering the Kaminski auction gallery. The exact origin of the lamps is unknown, but they are most likely from a theater or train station and are monogrammed “TRR.” They stand 10 feet 6 inches high with globes 20 inches in diameter.

Day two of the sale is a total change of tune, with Americana as the focal point. An important collection of baseball cards and memorabilia; and a single-owner collection of folk art from Cape Cod, Mass., will lead the lineup.

An exciting collection of 305 tobacco/cigarette baseball cards including T206, Sweet Corpora, Tolstoi, El Principe De Gales, Piedmont, Caramels and Ranely T204s is on offer. Players include Ty Cobb, Cy Young, Tinker, Evers, Chance “Chief” Bender, John McGraw, Christy Mathewson, Cicotte, Bradley Barbeau, and many others. The cards are all in fair to excellent condition, and are a wonderful historical collection that will be sold intact. They are estimated at $10,000-$15,000. Finally, a lot of two souvenir Red Sox programs, to include: “Season 1913 World’s Champion Red Sox,” and “Boston Red Sox, American League 1946 Champions” are estimated at $3,000-$5,000.

American art highlights in the sale include a John Henry Twachtman (American 1853-1902) watercolor of a farmhouse in Annisquam, Cape Ann or Ipswich, Mass., valued at $7,000-$12,000. A Henry Inman (American, 1801-1846), portrait of DeWitt Clinton, the sixth governor of New York, is valued at $5,000-$10,000. Inman was one of the foremost portrait painters of the early 1800s. His subjects include many politicians, including Martin Van Buren, and his pieces can be found in the White House collection and the Metropolitan Museum of Art.

A Thomas Chambers (American 1808-1866) oil on canvas, “Corsica, Birthplace of Napoleon,” originally from the Avis and Rockwell Gardiner Collection, Stamford Conn., is estimated at $3,000-$5,000

There is an exceptional Northwest Coast cedar decorated box, valued at $4,000-$6,000, as well as many wonderful American folk art paintings, whirligigs, wooden mechanical banks and trade signs as part of the Cape Cod collection.

Furniture offerings include a rare, early 19th century Boston Sheraton mahogany five-drawer chest by John and Thomas Seymour, with an old label stating that it belonged to Lady Cushing Whitwell, who died in 1883; and an 18th-century Newburyport Joseph Short lolling chair. Each is expected to make $3,000-$5,000. A fine 18th-century Chippendale slant front desk of maple and tiger maple, having a stepped interior with two block-front drawers and fan carving, is valued at $4,000-$6,000. 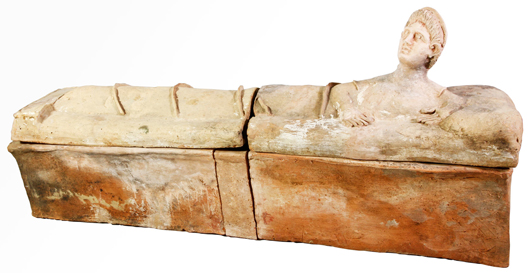 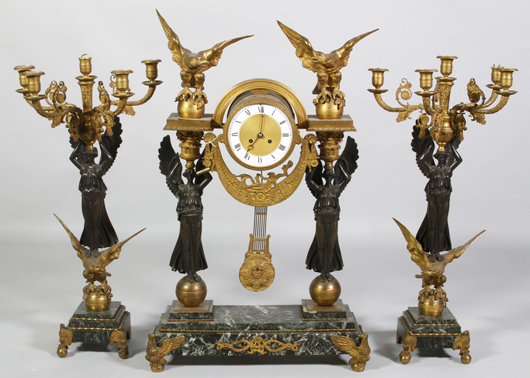 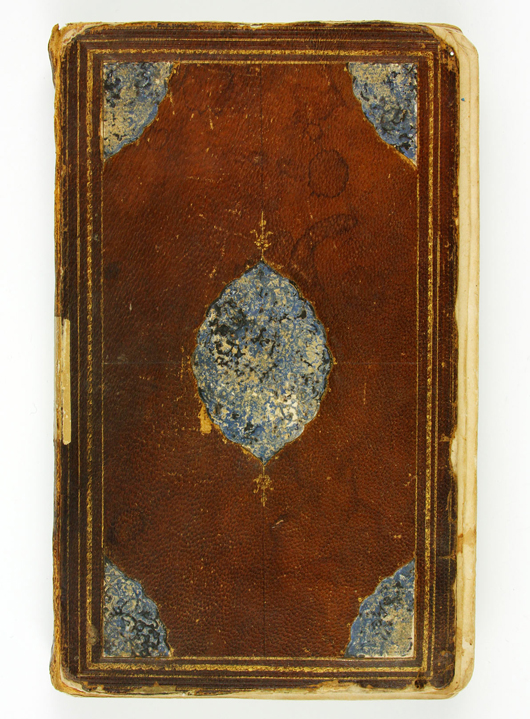 Yusuf and Zulaikha: A Poem by Jami. Kaminski’s image. 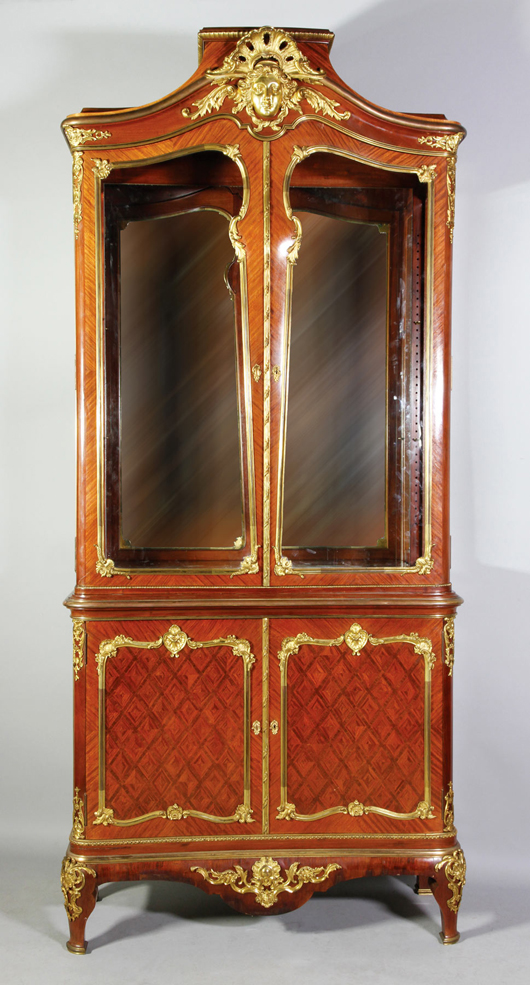 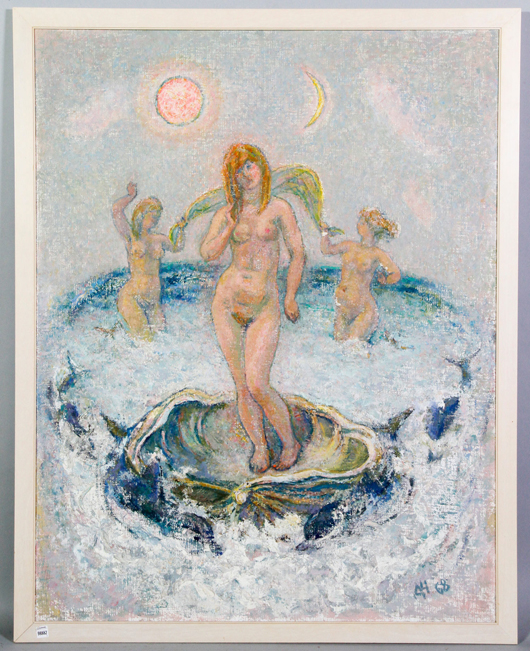 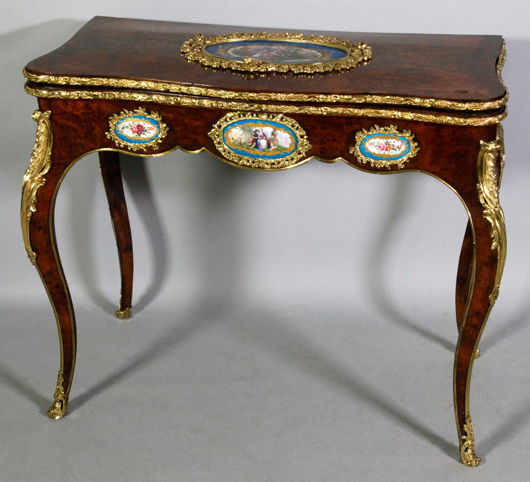 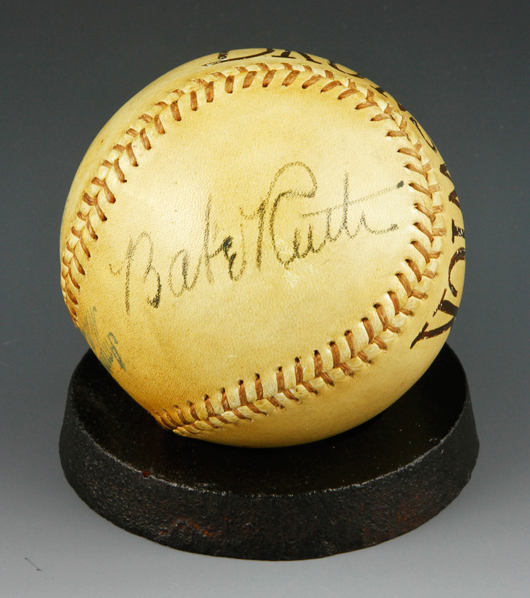