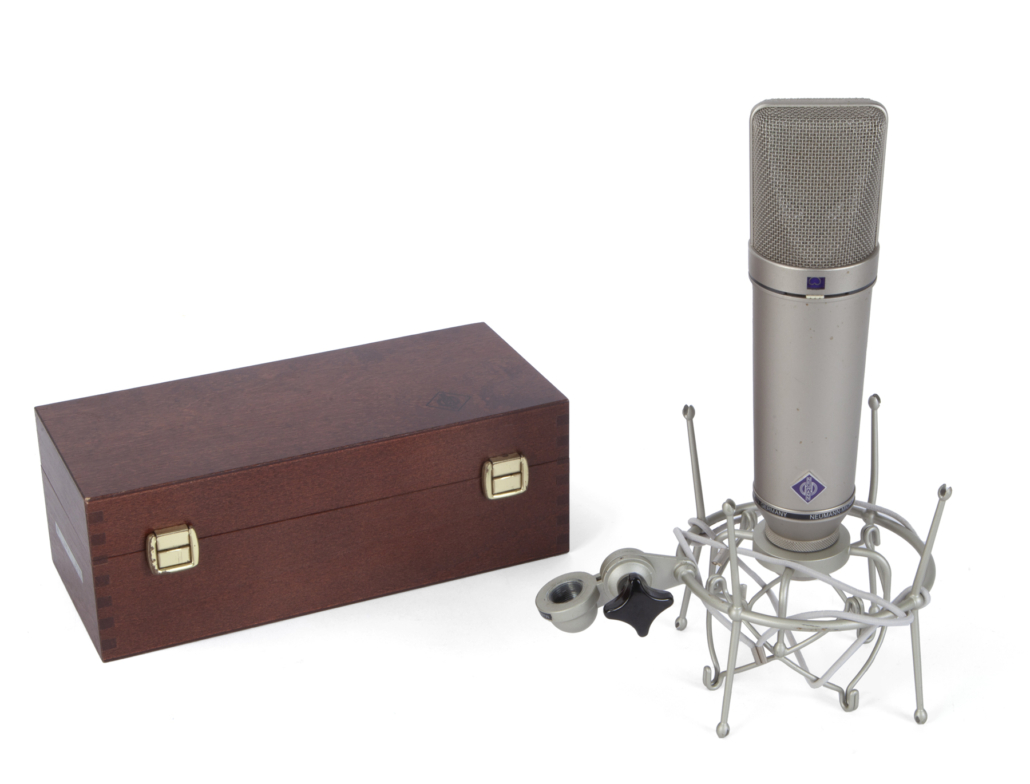 LOS ANGELES – Julien’s Auctions announces Property from the Collection of Jean and Casey Kasem, taking place Thursday, March 17 in Beverly Hills, California. Featuring nearly 500 lots never before offered at auction, the sale will be a celebration of the life and career of the American radio icon who entertained millions around the world as the King of the Top 40 Countdown and as the voice of Shaggy in the animated Scooby-Doo television franchise. The auction will also feature luxurious items and possessions from his wife, actress Jean Kasem, best known for playing Loretta Tortelli on the iconic sitcom Cheers. Absentee and Internet live bidding will be available through LiveAuctioneers.

On offer is a collection of the radio and voiceover legend’s audio gear and scripts, as well as thousands of vinyl records, celebrity-signed letters and guitars, memorabilia and awards from Kasem’s long-running syndicated radio show American Top 40, and also art, furniture, decorative pieces, and personal wardrobe and household items used by the Kasems during their 34-year marriage and life together in their Holmby Hills estate in California. 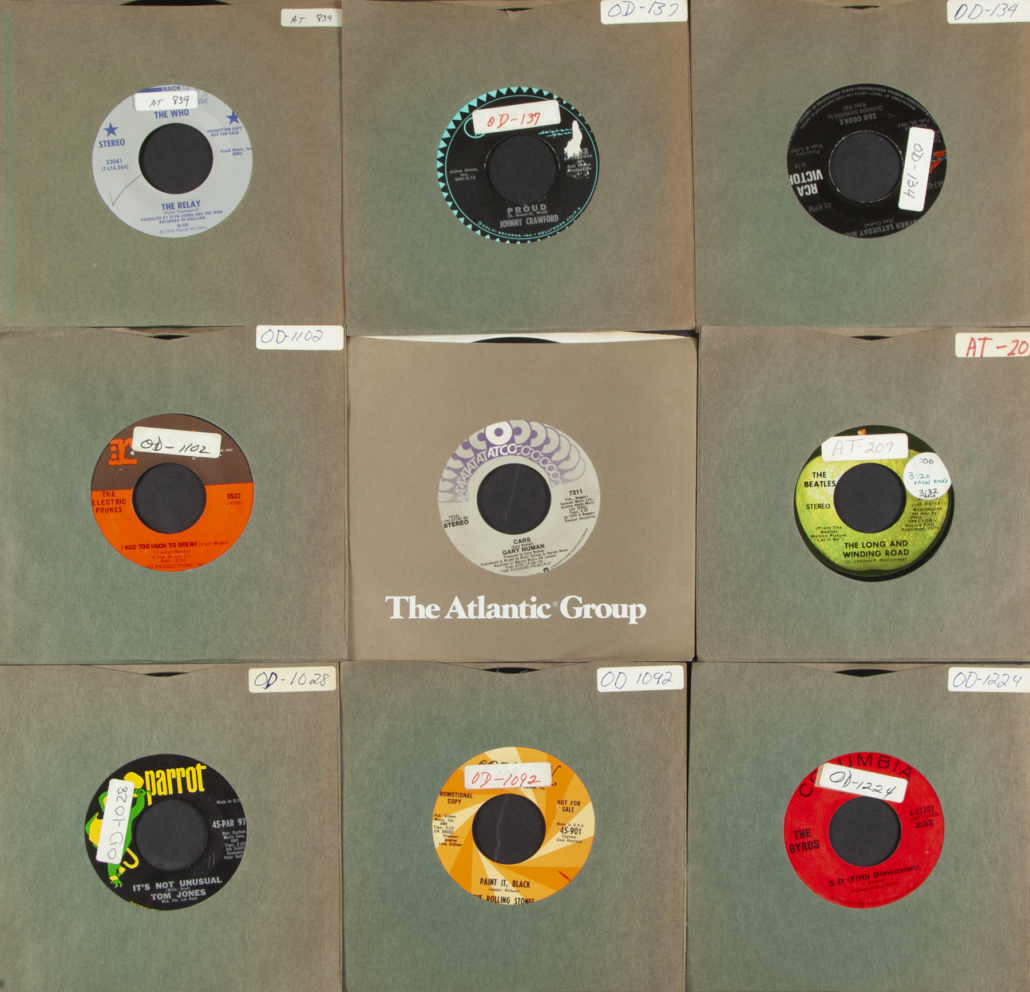 Auction highlights include Casey Kasem’s personally used German-made Neumann brand model U 87 Ai studio microphone, which includes its original wooden box and shockmount, estimated at $1,000-$2,000; and his enormous record collection spanning various genres, time periods and artists, among them collections of vintage seven-inch 45rpm record singles of more than 300 to 500 records in each lot, with estimates for each hovering in the $200-$700 range. 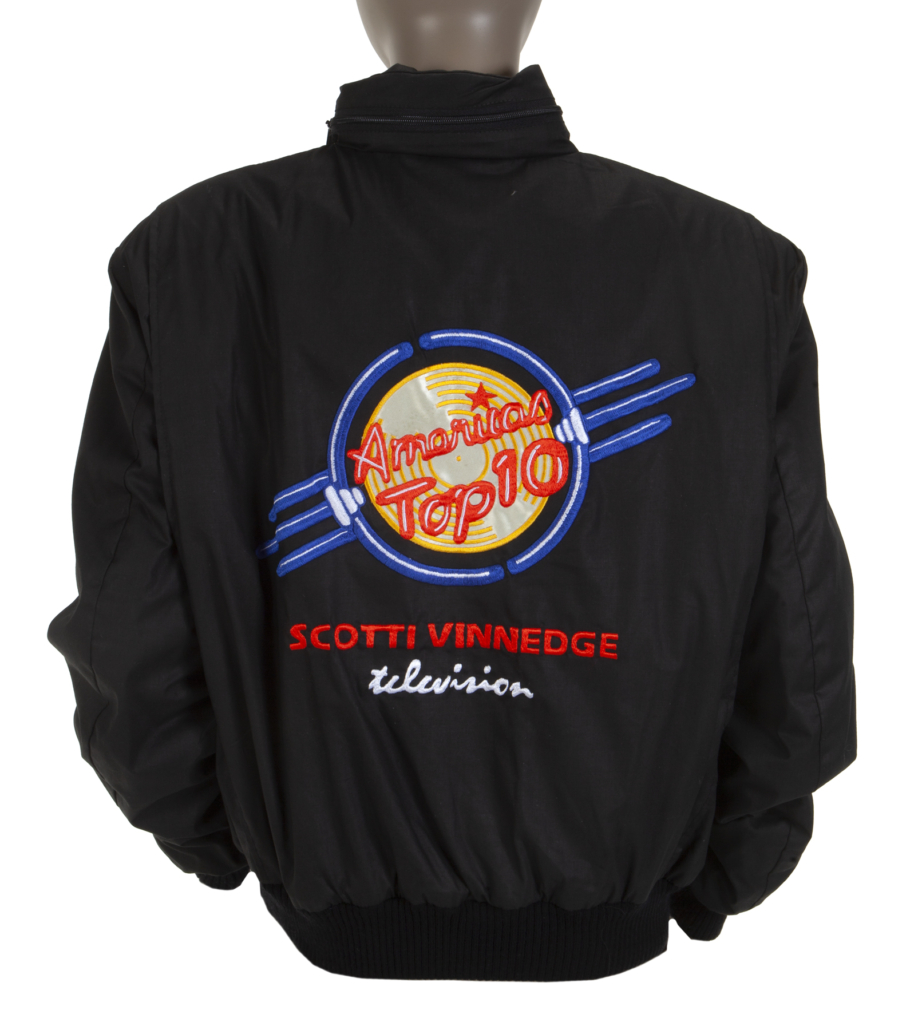 A conservatively estimated prize is a pair of commemorative America’s Top 10 bomber jackets with “Jean” and “Casey” embroidered in red, estimated at $200-$300. Of course the lineup includes Scooby-Doo material. Offered as one lot are three original animation cels: one of Kasem’s character Norville “Shaggy” Rogers standing alone, another featuring the entire Mystery Gang, and the final cel depicting Shaggy and Scooby-Doo with an attached note from Joseph Barbera. This lot carries an estimate of $200-$300. 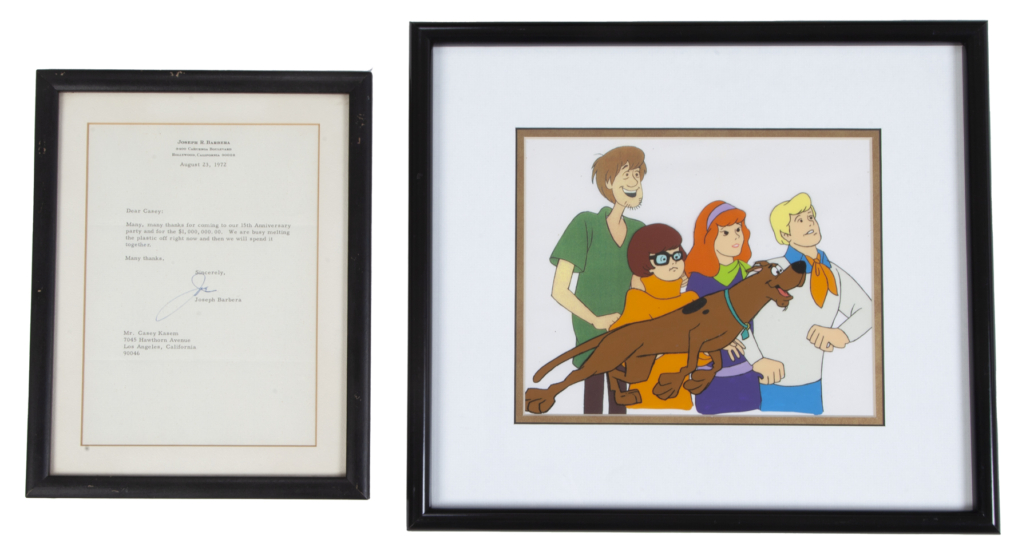 Also of interest is an original District Bank Limited check made out to Lineside Electronics Ltd. for £3,000 pounds, signed by John Lennon and dated May 29, 1970 – approximately one month following the breakup of the Beatles – in a custom-frame together with an image of Lennon. Its estimate is $1,000-$2,000. 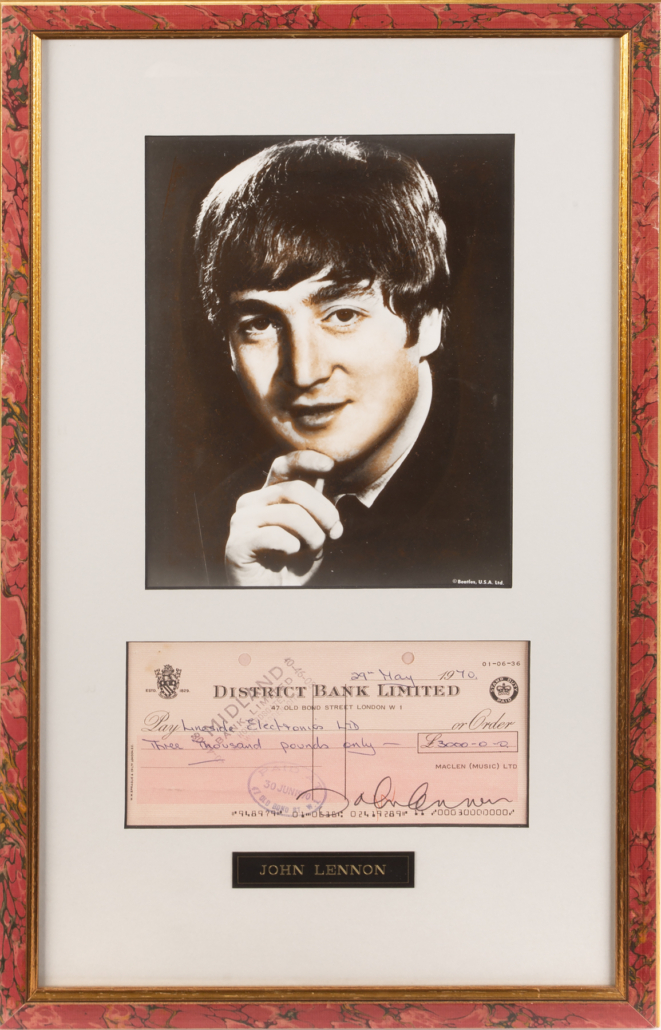 Within the collection of scripts and material from the early broadcasting career of Casey Kasem is a lot consisting of a large group of artist biographies, including those for Frank Sinatra, Paul Anka, The Beatles, Diana Ross, The Shirelles, Percy Faith and Barbara Streisand, as well as handwritten notes and other ephemera related to American Top 40, estimated at $100-$200. 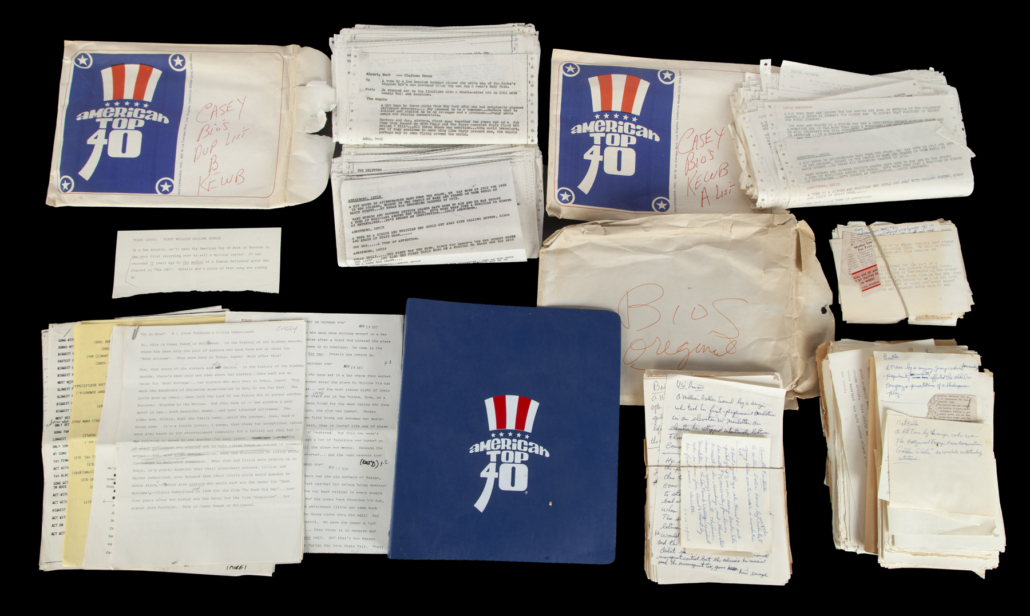 The March 17 auction also features items, ephemera and costumes from the life and career of Jean Kasem, including those related to her recurring role as Loretta Tortelli in the long-running comedy Cheers and the spinoff series The Tortellis, in which she played the bubbly, blonde second wife of Nick Tortelli (Dan Hedaya). Chief among them is a black and pink floral print dress she wore in a Cheers episode that aired in February 1986. The costume is estimated at $200-$300. 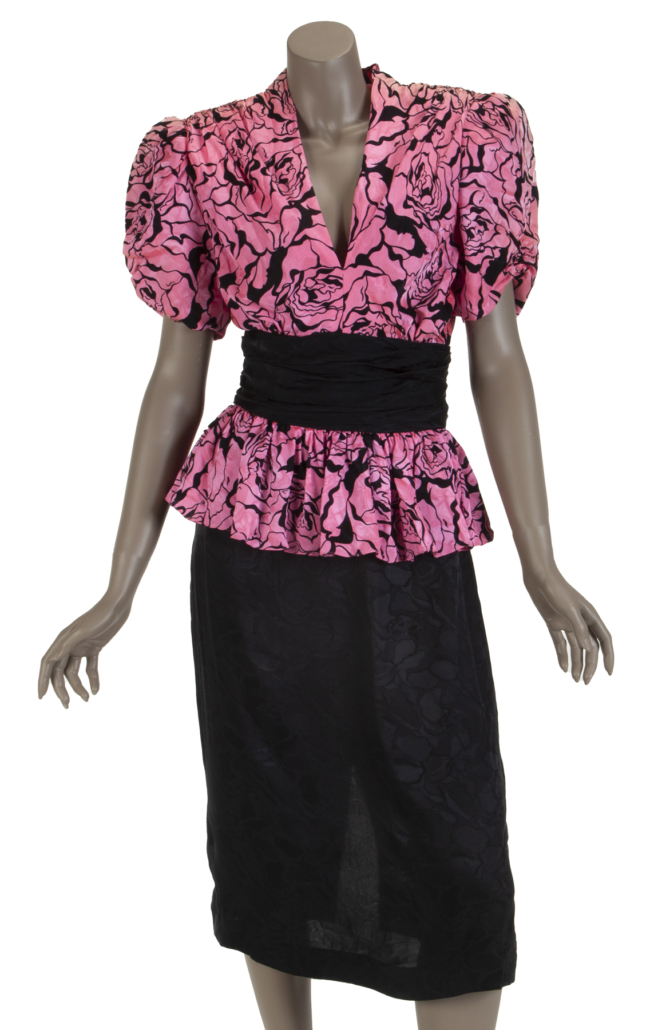 Jean has also consigned the champagne-colored wedding dress, veil and cropped jacket she wore for her 1980 marriage to Casey. The bridal ensemble, designed by J. Raymond, is estimated at $500-$700. 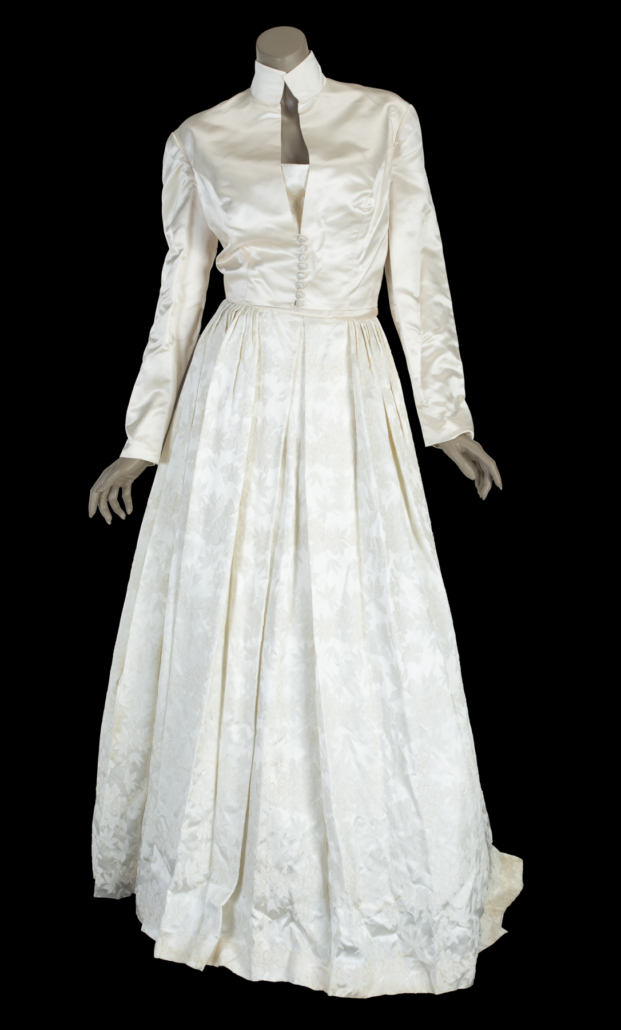 Fine furniture, paintings, household and decorative items from the Kasems’ magnificent estate in Holmby Hills, California are led by a set of Gorham Versailles pattern sterling flatware for 12 with assorted monograms – 245 pieces total in an antique Gorham fitted velvet-lined mahogany box. The Gorham flatware carries an estimate of $10,000-$20,000. 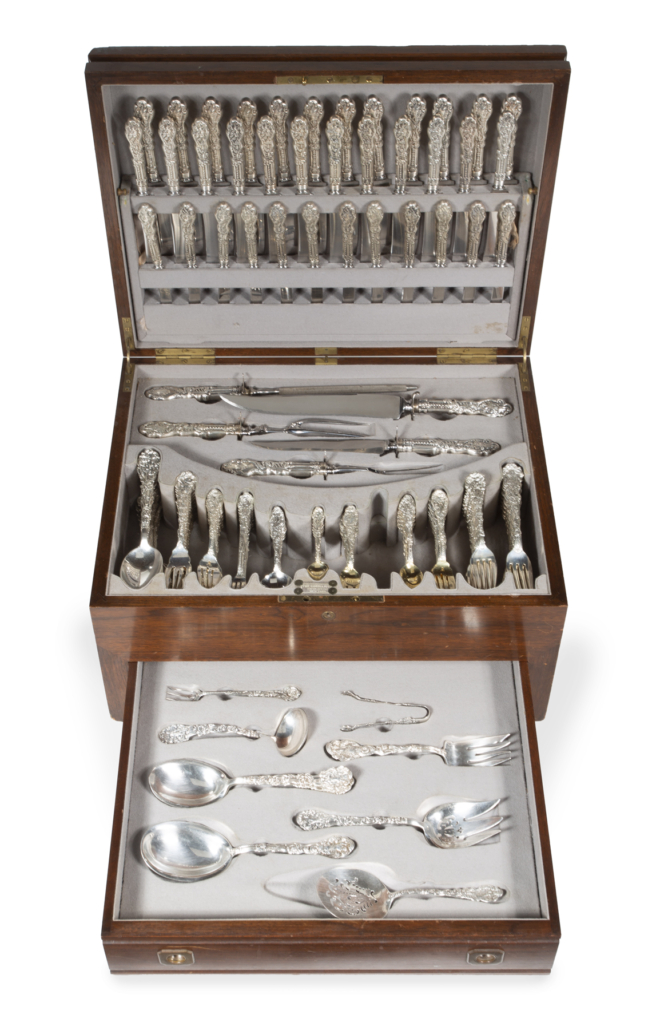 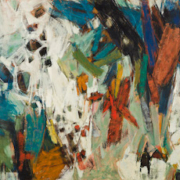 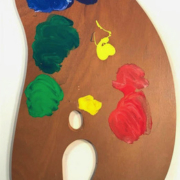 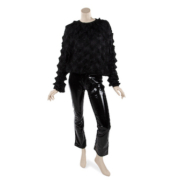 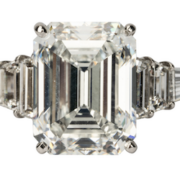 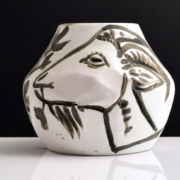 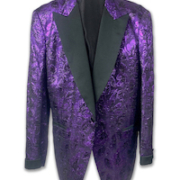